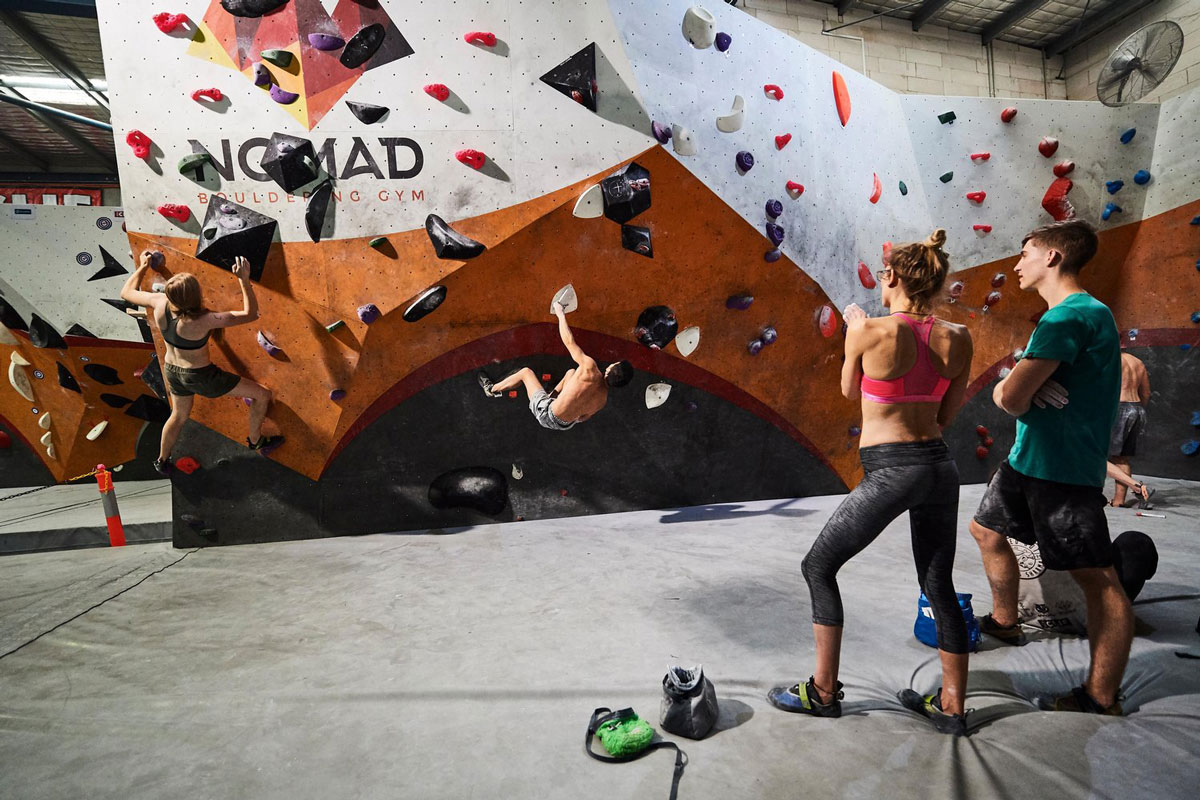 I like to think myself the perfect Sydneysider. Sophisticated enough to dine at Hubert, down-to-earth enough to brave Coles, Dee Why, secure in myself enough to wear trackies, thongs and a beanie and not care if people think I’m from the Central Coast…

Not to mention modest.

But when I was invited to go bouldering in Nomad Annandale, I knew I was placing everything on the line for an hour of free coffee, exercise and beer. Why? After 25 years of building my reputation, I could be misconstrued as a hipster.

Why? Bouldering is far removed from the castrating carabiners and hellish harnesses of the indoor climbing gyms of the ’90s. In fact, bouldering has pretty well freed itself from the need for most equipment (all you need is shoes and chalk) to become Sydney’s sport du jour.

Bouldering’s journey from boy scout sport to hipster hook up zone (as far as I saw this is an exaggeration, but other writers have characterised bouldering as a “real-life Tinder-meets-yoga studio-meets-sober-nightclub“) has been well documented online, having been called everything from “the perfect counter culture workout” to the new surfing, with a magical kind of specialised lingo which both keeps newbies out (and thus draws them in), “providing boulderers with a sense of belonging (and maybe a little superiority).”

Having recently been (virtually) flung into a cliff at Sydney’s scariest wave, I decided it was time to try something else, and took Nomad Annandale (an inner West suburb just next to Glebe) up on their offer.

On arrival, I noticed three things: it’s a stone’s throw from a popular brewery, the coffee bar smells great, and it’s a million times nicer than Anytime Fitness.

My first port of call is to change out of my Oliver Cabells into a pair of climbing shoes half a size too small. The logic? Wearing too-small shoes gives you the confidence to put all your weight on one toe to make that final lunge, 4 metres up in the air (something I later came to appreciate as I hesitated, despite rocking the perfect footwear, and found myself plunging to the floor). 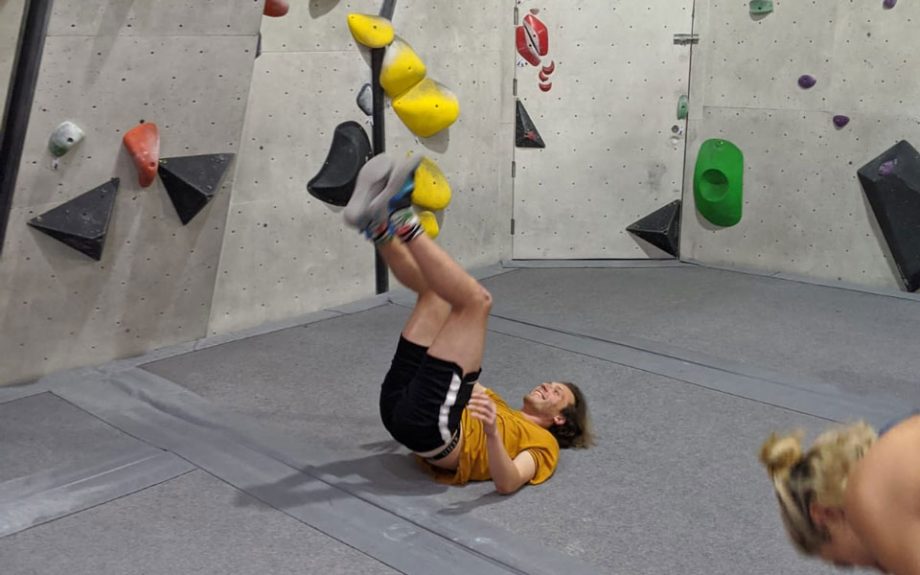 Having a ball. Image: DMARGE.

After warming up on a few of the easier blue ‘colour-coded’ routes, I went for the orange (intermediate). This proved, not a big mistake, but a big challenge, with the advice of the Nomad staff helping me realise the further away from the wall you allow yourself to hang, the less energy you’ll use.

RELATED: Weak As A Twig? Give Your Body Explosive Strength Like Rock Climber, Tom Farrell

I noticed, too, if you are new to the sport you had better try the complicated climbs at the beginning of your session, because after about 20 minutes (in my case) the lactic acid proved too much and even going back to the blue walls left me stumped.

I also learned Nomad Annandale is the largest bouldering gym in the Southern Hemisphere (with climbs for everyone from the total beginner to those that want to embrace their inner Touching The Void), and that there’s little chance of getting bored as the ‘boulders’ are changed every week or so. 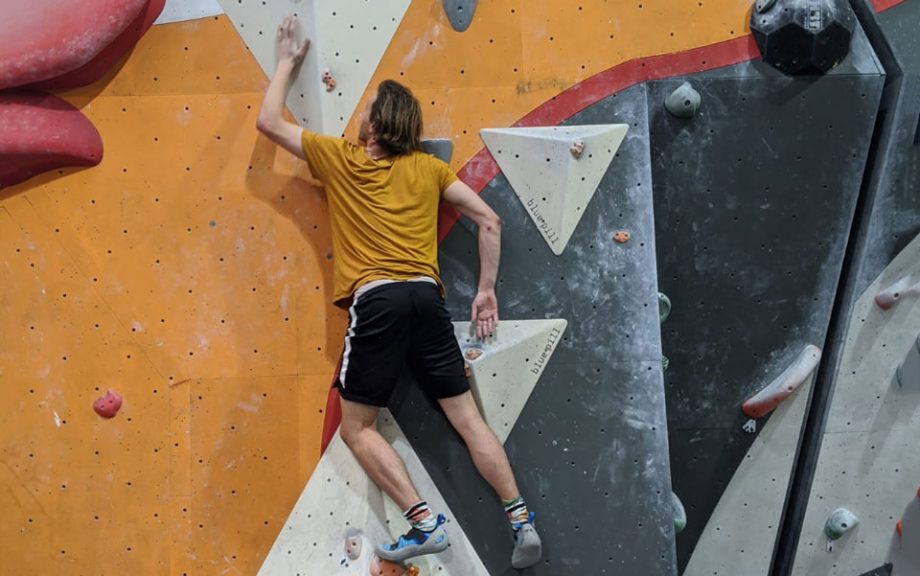 The icing on the cake is there’s a gym and yoga room out back for members, and a dog-friendly brewery – Wayward – around the corner for some sneaky after session drinks.

The staff are not stereotypical climbing geeks

I don’t know where all these tropes have come from (I thought Alex Honnold was kind of cool), but for whatever reason many of the articles in recent years about bouldering have painted the staff (and patrons) as either annoying hipster influencers or reclusive geeks.

As one put it: “The regulars, meanwhile, are the usual mix — those who wore Patagonia before it was cool, and after. The men on reception all have beards and film studies degrees, and are all called Joe. Maybe one Silas.”

In my case, I found the staff friendly and welcoming (though to be fair I was there to review the place). Still: not a Patagonia jumper to be found (and not an Elon Musk fanboi in sight).

Unlocking your phone after the session may prove tricky

Expect your arm strength to disappear, especially if you ignore the proper technique of mostly using your legs. Oh and if you’re not a regular climber, beware of DOMS.

The social aspect is huge

In this era of unprecedented loneliness, where the average late 20s city slicker could easily find themselves in a hamster wheel of work, gym, microwave meal, repeat, I can see why bouldering is a godsend.

Not only did I find it significantly more entertaining than doing 3 x 8 sets of leg press at the gym with the same playlist I’ve been listening to since 2015 blaring in my ears (probably trying to drown out reggaeton, or MTV), but I saw, despite being on my own, how other groups of people easily socialised without the pressure of a dinner date, or even drinks.

You get to spend lots of recovery time on the crash mats between climbs, opening up opportunities to start conversations both with friends and strangers.

It’s epic and the brewery next door (did I mention there was a brewery next door?) means you can either have a purely healthy social session or a totally debaucherous one too, if that’s how you’re feeling.

It can be a valuable mental health tool

I can see why people get addicted. As Vice explored in January this year, long working hours plus a lack of awareness about our own emotional needs can see late 20s city dwellers, as we drift beyond our university and school friend groups of our early 20s, get lonely.

“A 2015 YouGov poll found that 12 percent of men over the age of 18 didn’t have a close friend they would discuss a serious life problem with. Climbing, with its space for conversation and the excuse it provides to meet up with a group of people every week, provides a valuable antidote to this.”

Having dipped my toe (and hands) in the chalk, I can understand why.