Balls to the wall.

From multiple Richard Milles to colourful Rolexes and even a one-of-one Audemars Piguet Royal Oak, the man certainly isn’t short on wrist candy. Speaking of Royal Oaks, ‘King James’ has just added another one to his expansive horological library – a particularly eye-catching watch that’s quickly becoming the most controversial watch of 2021.

With its distinctive design and growing notoriety, it’s hard to miss. 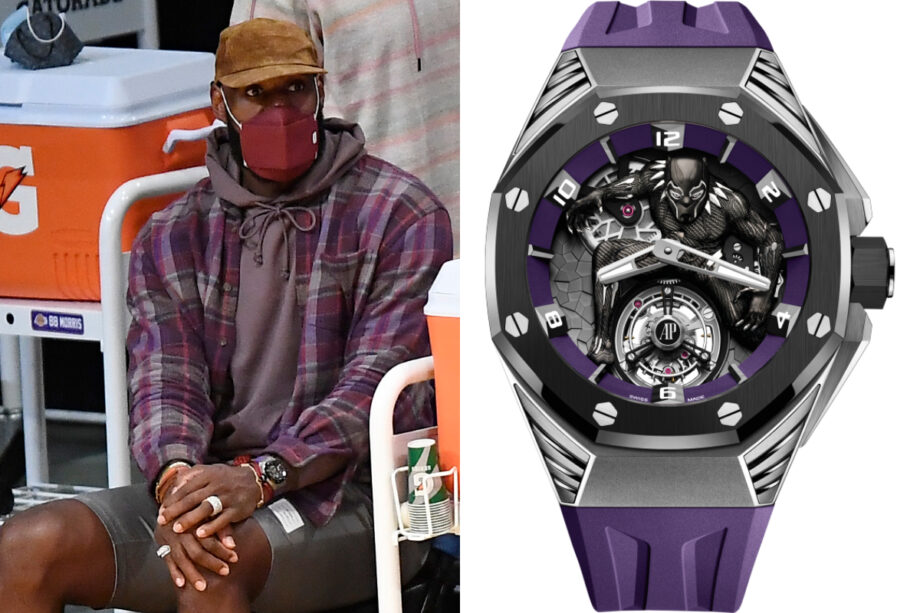 The first in what’s touted to be a long line of ‘character watches’ AP plans to produce in collaboration with Marvel, this Black Panther watch features an elaborate sculpture of the eponymous superhero carved out of white gold. A 42mm sandblasted titanium case and an eye-catching purple strap add additional visual flair.

LeBron’s model is a limited edition of 250 models, but an additional one-off version of the watch with an engraved white gold case and additional purple highlights was sold at auction for 5.2 million USD to an anonymous Chinese buyer.

James also took to his Instagram Story to show off the hulking (see what we did there?) timepiece, the big man flexing some Cartier and Louis Vuitton bracelets for good measure.

Now, we know what you’re thinking: the placement of both the hands and the tourbillon is somewhat unfortunate. We can’t imagine T’Challa here is particularly comfortable… But that’s not the only thing that’s got watch fans up in arms.

The reason it’s so controversial is that releasing a character watch is a truly bizarre move for a high-end watch brand like AP to make. Character watches are normally the domain of cheaper watch brands, as they’re considered highly gimmicky – for example, Citizen makes a whole range of Marvel watches, including a Black Panther model (which only costs 440 USD).

High-end watch brands have dabbled in character watches before: the Royal Oak’s designer, Gérald Genta, famously produced a series of Mickey Mouse watches, and OMEGA has long featured Snoopy on limited editions of their famous Speedmaster ‘Moonwatch’. But it’s different when one of the exalted ‘Holy Trinity’ watchmakers does it.

It could also be considered in poor taste, considering the recent death of Chadwick Boseman, who played Black Panther in the Marvel Cinematic Universe. Is the watch a tribute to his memory, or a cash-grab? The jury’s still out on that one.

What the Black Panther AP has been successful in doing is generating publicity. Hell, we’re writing about it. And at least it’s something different – while Watches & Wonders 2021 has been a real game-changer, the reality is that the luxury watch industry is still a rather stuffy one sometimes. Maybe this AP is a breath of fresh air.

We just wish we had LeBron’s confidence (and bank balance) to rock a watch like this.