Sydneysiders and Melburnians live in constant jealousy of Brisbane’s climate. Sure, all three cities receive their fair share of glorious sunshine, but Brisbane and the neighbouring Gold Coast represent the perfect advert for Australia’s laidback, beachside lifestyle.

Bronzed and fabulous Brisbanites, naturally, spend a lot of their time outdoors and because of the sunshine, need to stay refreshed and hydrated. Fortunately, there are a number of top-notch pubs with their doors and arms wide open to welcome you for a refreshing beer or two (or more, if you’re so inclined). Pubs are the perfect spot for both midweek and weekend brunching, lunching and dining, and whether you remain fixed to your seat for the duration of your session or use a pub as a spot before heading on to one of Brisbane’s coolest bars matters not.

Because you can be guaranteed of a good time either way at any of the cool pubs in Brisbane that we’ve picked out, where you can sip on some of the finest beers from both domestic and international markets and pair them with some equally delightful food. Your new Brisbane watering hole awaits. 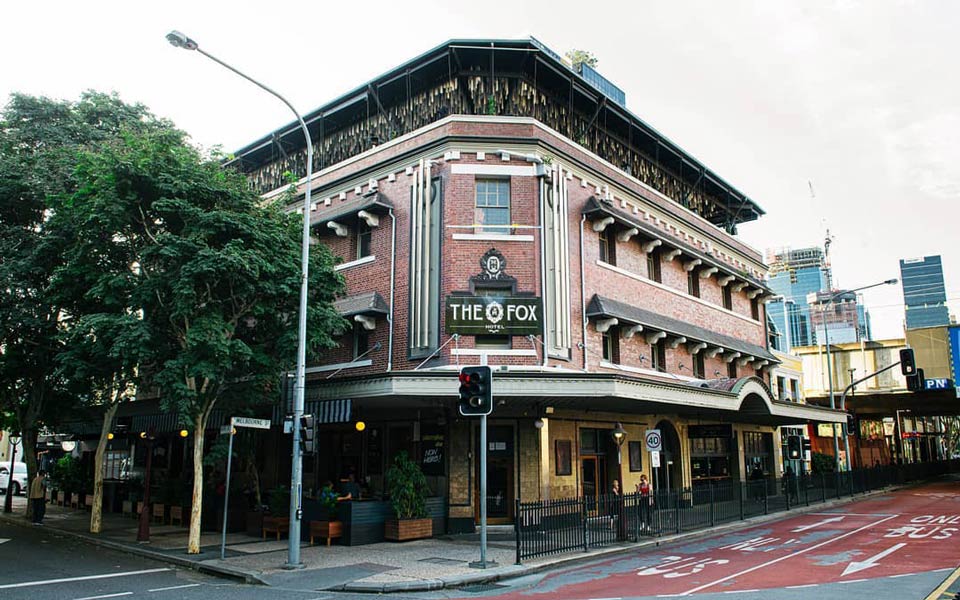 Situated on Brisbane's Melbourne Street is The Fox Hotel, a venue that is essentially a pub and a bar mashed up into one large multi-purpose venue. 1920s in its approach to design, The Fox has several rooms split across numerous floors, all offering food and drink. Try the Art Deco bar on the ground floor or head up to the rooftop for views over South Brisbane and some handmade pizza.
Address: 71-73 Melbourne Street, South Brisbane, 4101
Phone: 07 3844 2883
VIEW 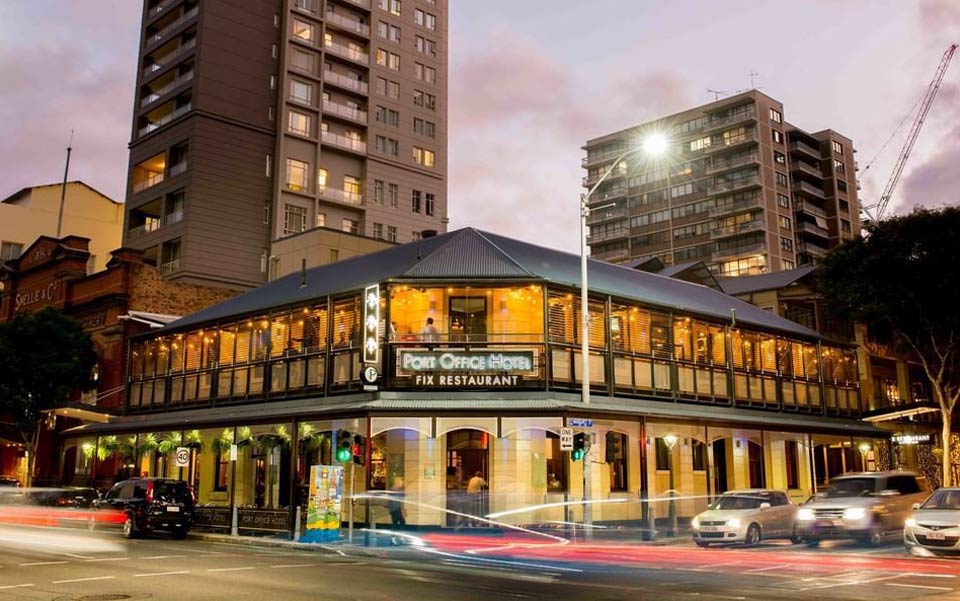 The Port Office Hotel has, in its various guises dating back to 1864, been subject to a couple of major floods. However, after extensive renovation works carried out after each, the Hotel today is tough and sturdy and lives to serve Brisbanites for years to come. Inside you'll find the Port Office Dining Room, rooftop Balcony Bar and ground floor Public Bar, all of which not only deliver incredible food and drinks, but all can be hired out for private events too.
Address: 40 Edward Street, Brisbane, 4000
Phone: 07 3003 4700
VIEW 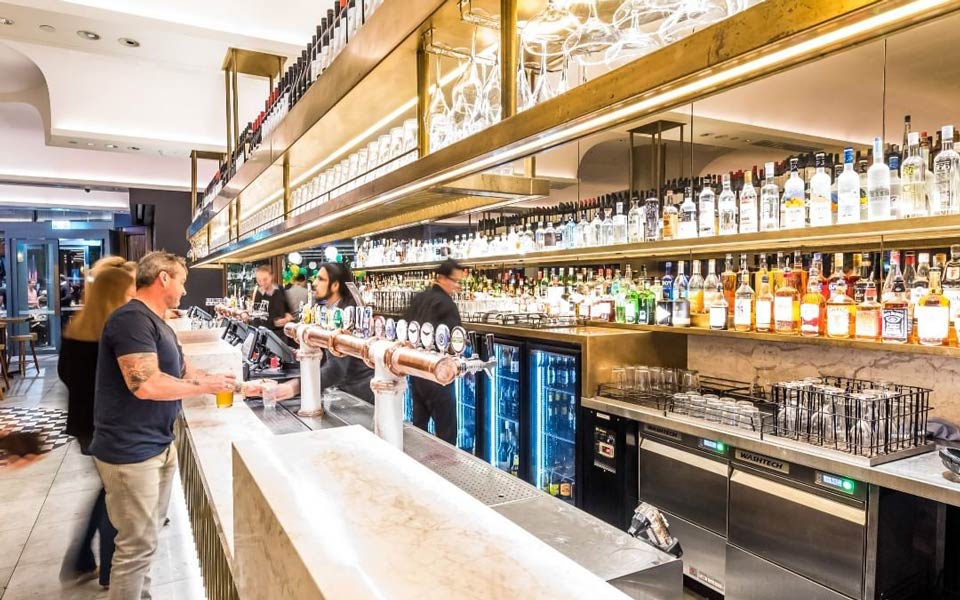 Pig 'N' Whistle is a chain of British-style pubs dotted around Brisbane, and it's the Riverside venue we've selected as being one of the coolest. Just down the round from the Port Office Hotel, Pig 'N' Whistle Riverside puts a typically British emphasis on live sport, with all EPL games being shown. For Australian sports fans, AFL and NRL games are shown too.
Food is as hearty and English as you'd expect, including steaks, fish and chips and pies, while the beer selection sees both domestic and international varieties stocked.
Address: Riverside Centre, 123 Eagle Street, Brisbane, 4000
Phone: 07 3832 9099
VIEW 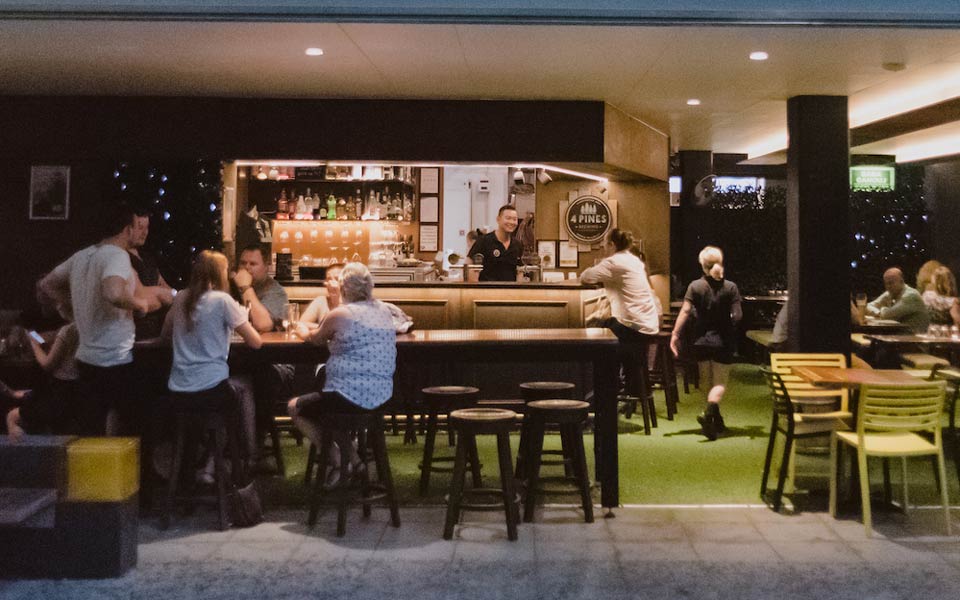 Positioning itself as a gastro pub serving fine-dining-esque food, Hop & Pickle is exactly the sort of pub you'd want to park yourself at on a Sunday afternoon (not least for the roast dinners). The drinks are equally tempting; the wine menu isn't the largest ever but it has been especially curated to show off some of the best Australia has to offer while the cocktails are refreshing, delicious and dangerously smashable.
Address: 6E Little Stanley Street, Brisbane, 4101
Phone: 07 3217 2652
VIEW 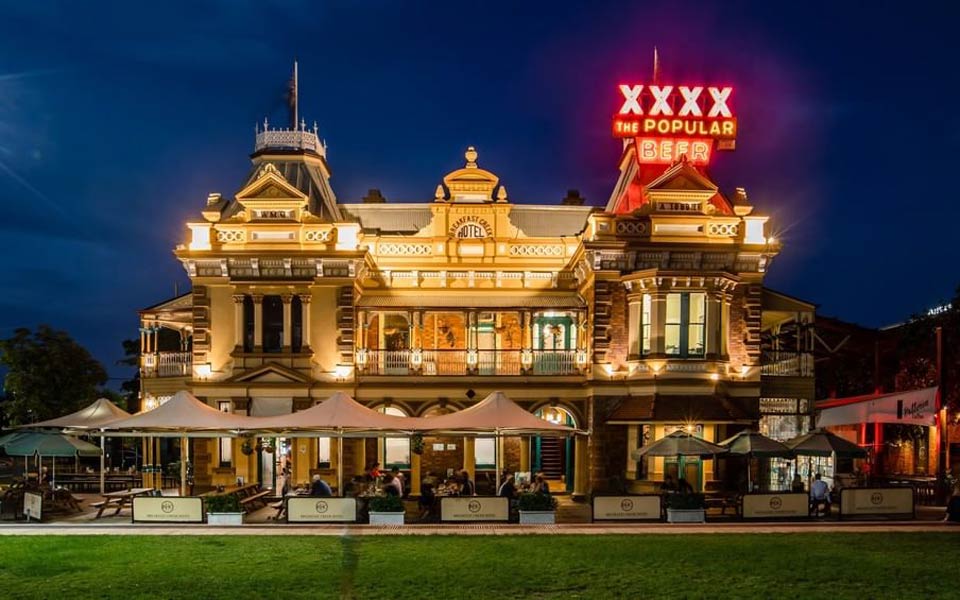 One doesn't simply visit Breakfast Creek Hotel in search of fine food and drink (although, you will find it there in aplenty) but the venue is also a Brisbane icon, making it as much of a tourist attraction as well. Retaining its French Renaissance décor and architecture, Brekkie Creek has actually been certified a Q150 icon is celebration of Queensland's 150th birthday.
With a choice of bars to perch yourself at, each with their own distinct attitude, you're not short of options to sip away the hours.
Address: 2 Kingsford Smith Drive, Albion, 4010
Phone: 07 3262 5988
Shop Now 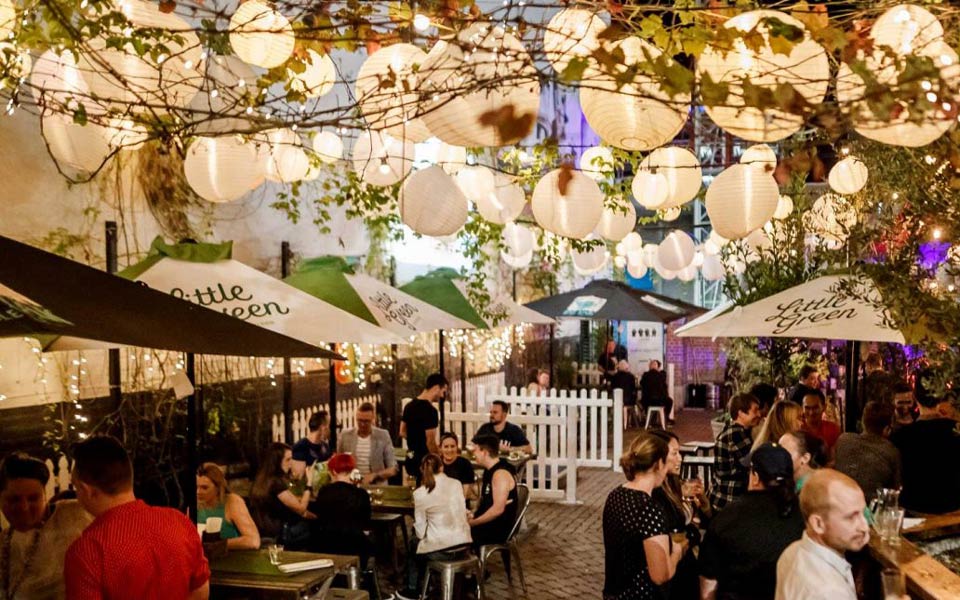 Built in 1885, The Wickham Hotel has since been a Brisbane icon. Found in Fortitude Valley, the pub offers various drinking spots split over several floors, including a large courtyard area. The Wickham transforms into a nightclub in the evenings, and is particularly popular with Brisbane's gay community.
Address: 308 Wickham Street, Fortitude Valley, 4006
Phone: 07 3051 7621
VIEW 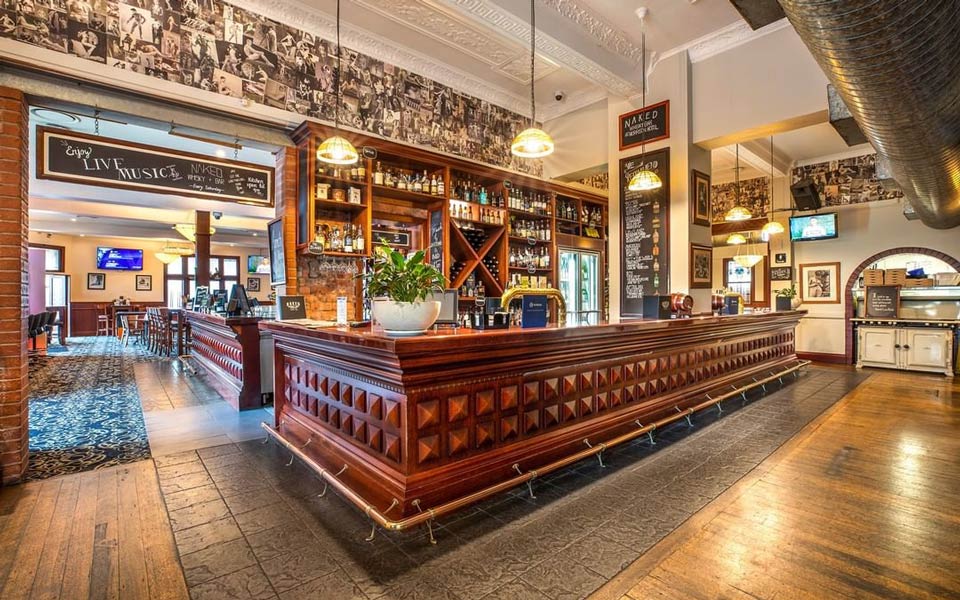 If whiskey is your poison then The Morrison Hotel is for you. While it does of course have a strong selection of beers and wines, its the 300 or so whiskies that are this venue's calling card. Although, we must admit, the steaks being slung in Fiasco's Steakhouse are equally enticing .
The Morrison is also a great place to watch live sport and is an official home of UFC.
Address: 640 Stanley Street, Woolloongabba, 4102
Phone: 07 3391 1413
VIEW 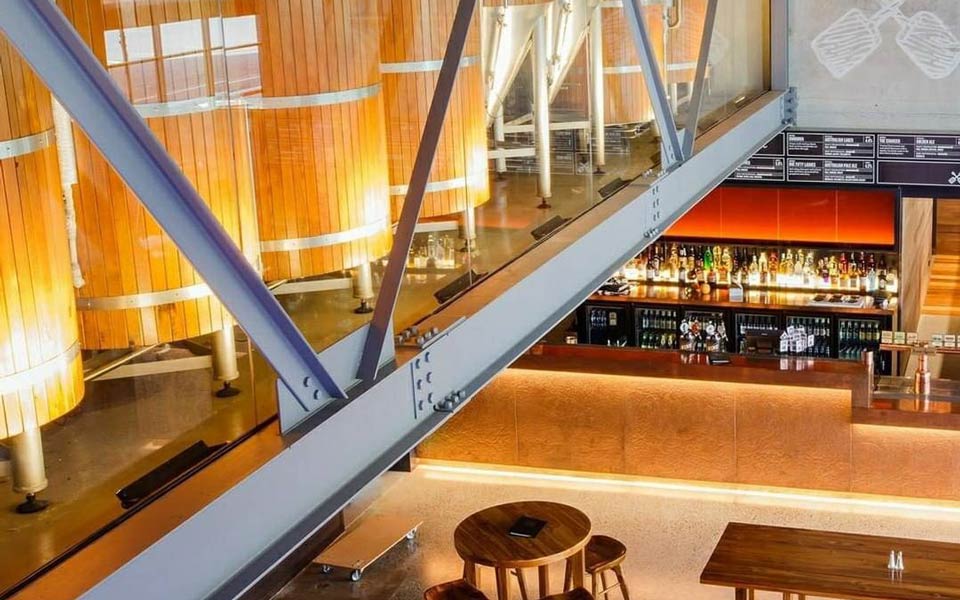 A member of the James Squire family, The Charming Squire is a must-visit pub for a healthy selection of craft beers, many of which are brewed onsite. The venue itself is delightfully modern , with exposed steel beams and acres of glass, providing views into the microbrewery.
Address: 3/133 Grey Street, South Brisbane, 4101
Phone: 07 3077 7254
VIEW 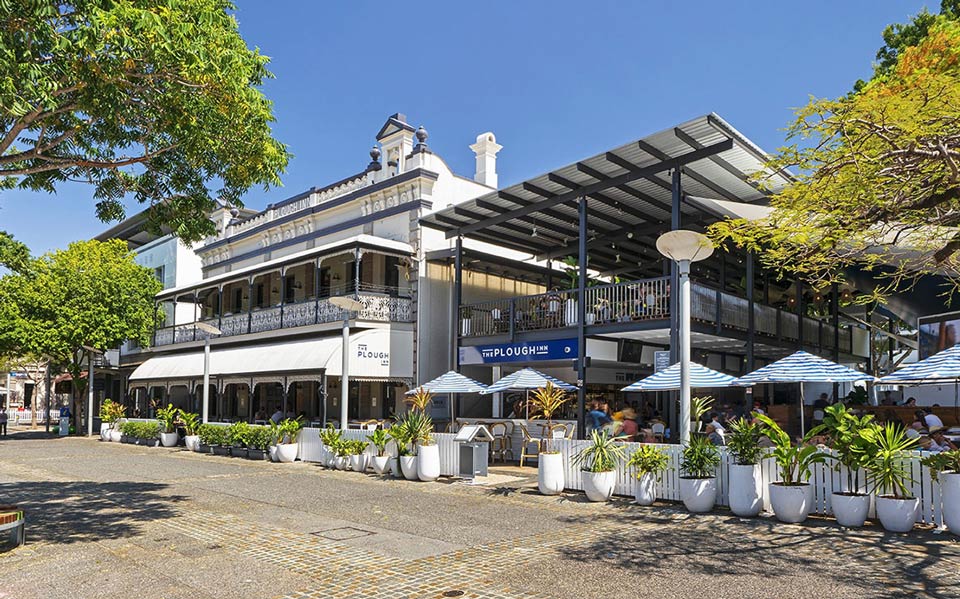 The Plough Inn is worthy of a visit simply for its architecture alone. A stunning building on South Brisbane's Stanley Street, this pub, built in 1864, has retained its original facade which now sits next to a wholly modern decked area. Live music and live sport are both catered for too, and The Plough Inn can also be hired out for private events.
The food menu reels off typical pub grub: think burgers, pizzas and steaks, while the list of beers is entirely Australian.
Address: 29 Stanley Street Plaza, South Brisbane, 4101
Phone: 07 3844 7777
VIEW 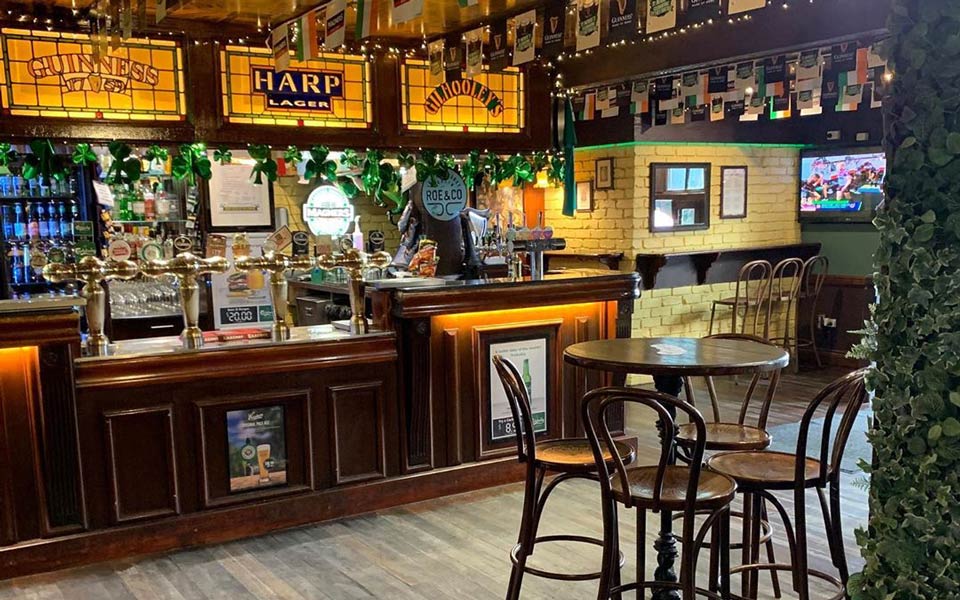 It's well-known that nobody can quite drink like the Irish, and our Gaelic cousins also know how to create a great pub atmosphere. Experience the latter and try to replicate the former at Gilhooleys, one of the best-loved Irish pubs in Brisbane.
While Gilhooleys also houses a restaurant, it's the bar side of things that will really entice you in. Naturally, Guinness is the star of the show when it comes to the tap selection, but for those who aren't fans of the Irish grog, you'll find a generous helping of other lagers, ales and whiskies.
Address: Albert Street & Charlotte Street, Brisbane, 4000
Phone: 07 3229 0672
VIEW

Golf Course Brisbane: 10 Best Brisbane Golf Courses You Need To Play At Least Once In Your Life

Where To Buy New & Used Watches In Brisbane

Best Brisbane Golf Shops To Stock Up On The Latest Equipment

Brisbane's Best Sneaker Stores To Get Your Kicks On