It’s no secret that Australia is home to a huge craft beer scene. Although Sydney may be the city that first comes to mind when you think of the home of Australian brewing, there are, in fact, a number of breweries to be found across the entire country. If you find yourself down in Victoria then you’ll certainly want to check out Melbourne’s best breweries, but if you’ve landed on this page, then we imagine you’re to be found in Brisbane.

There’s a very good chance you’ve already tried the delights produced by several of the best breweries in Brisbane, but you might not have known where they hailed from. As with breweries in Sydney and Melbourne, these Brisbane-based brew houses aren’t just industrial-sized warehouses with floor to ceiling silos, but instead, they’re welcoming watering holes offering a chance to sample all the beers made in-house, usually accompanied by some delicious grub, making them a perfect alternative to the traditional pub (although, Brisbane is still home to a number of cool pubs). 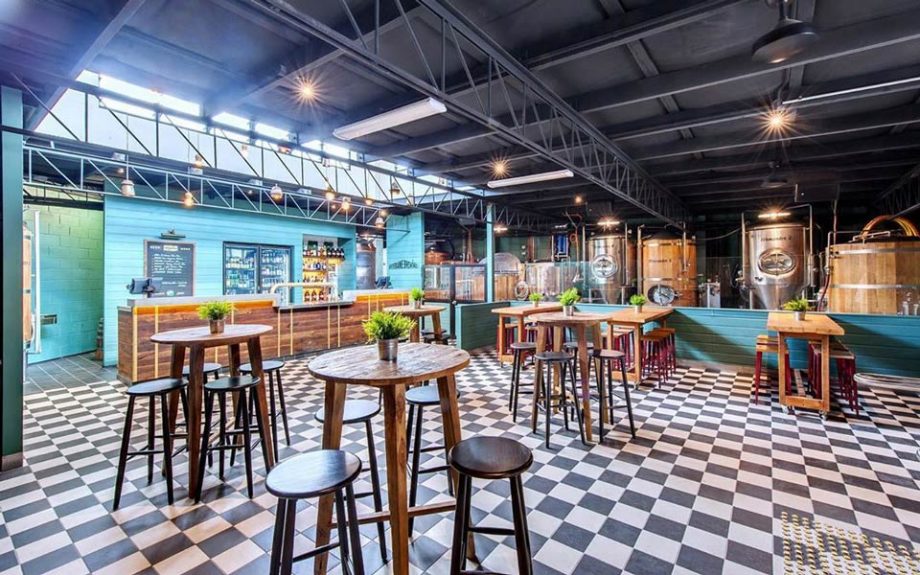 It might not be the most original name ever for a brewery, but the guys at Brisbane Brewing Co. are straight to the point and serve you beer straight from the source at their West End venue. A thoughtfully designed space which includes a beer garden, combined with a constantly rotating selection of beers (alongside the core range) makes this brewery a no brainer to visit. You can also enrol in ‘Brewniversity’, which will teach you all you need to know about how beer is made. 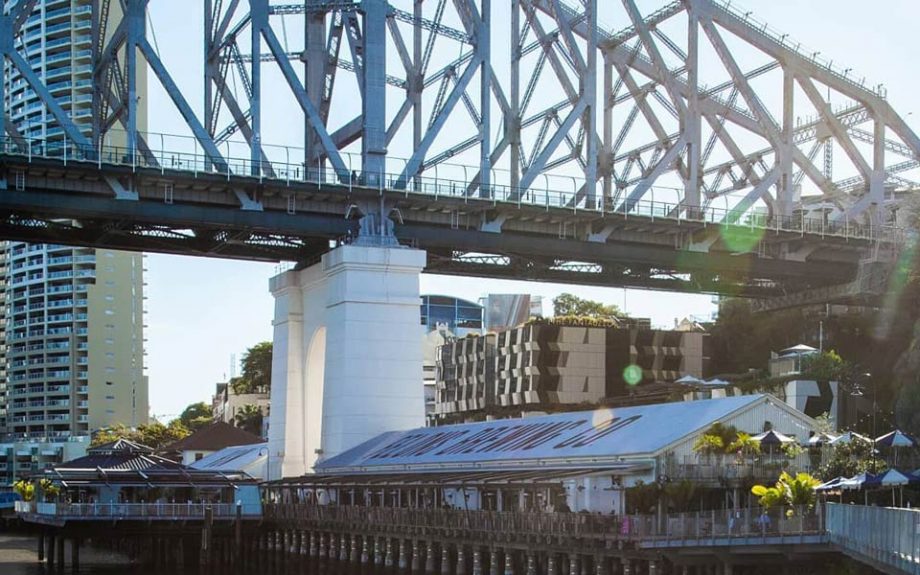 Comfortably slotting into our round-up of the coolest bars in Brisbane, Felons Brewing Co, naturally, has to make the cut of the best breweries in the city too. What makes it so good? Its location is certainly a major drawcard, being found directly under the Story Bridge, meaning you can soak up a riverside atmosphere, unlike many others. Felons currently has five beers in its range, comprising ales, low-carb options, a lager and a cider. 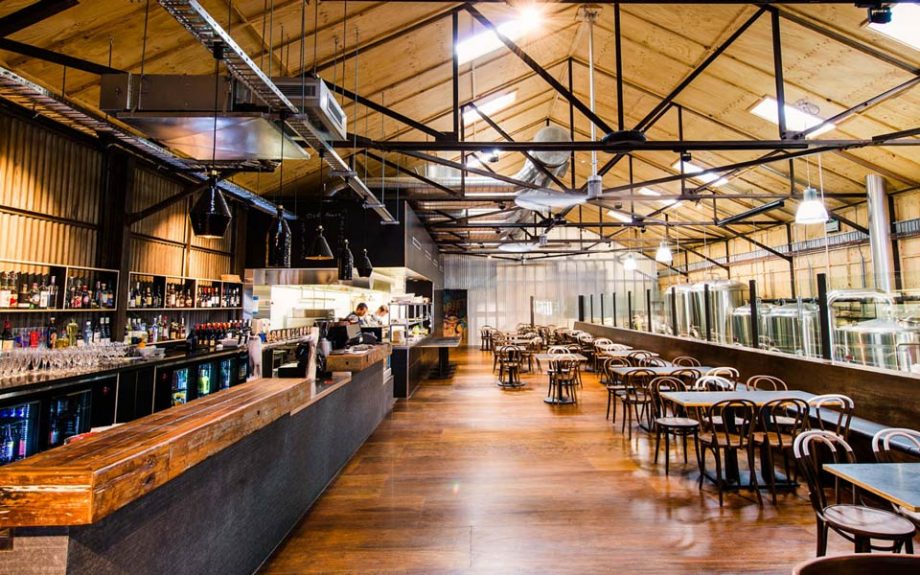 Newstead Brewing Co. is pretty much a Brisbane institution. The brewer opened its first site in Newstead in 2013 and expanded to a second location in Milton in 2017. Both venues are well worth a visit as they both offer tap beer straight from the source (both venues have working breweries onsite, the Milton site is the larger, being able to produce 1.4 million litres of beer per year). Alongside the core range of nine beers and a cider, both venues offer fresh, seasonal food that is the result of just as much love as the beers. 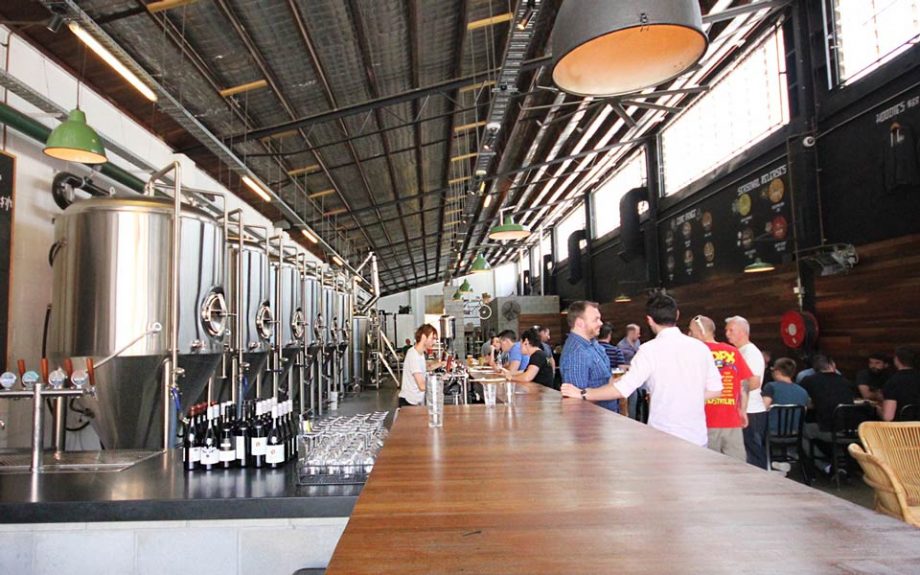 Green Beacon Brewing can be seen as something of a major success story. Beers began pouring in 2013 and within just six years, found themselves being bought by the behemoth that is Asahi Beverages, and finding their way into the business class trolleys on Singapore Airlines. Not bad for a microbrewery set up by two friends. A visit to the brewery will result in an assault on the senses, with an eight-strong core range of beers including a passionfruit gose, oatmeal stout and more traditional offerings such as a pale ale and an American amber. These are served alongside seasonal and special releases. 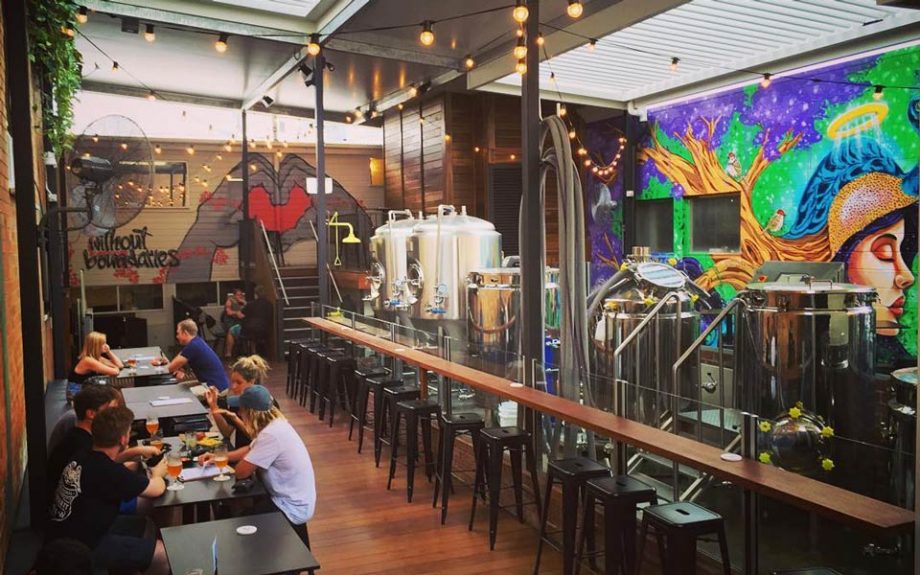 Catchment Brewing Co. finds itself taking up residence on the historic site of the West End Brewery, which in its current state, was built in 1937 (two buildings previously occupied the land, dating back to the mid-1880s, but were destroyed by floods and fires). The team at Catchment Brewing opened their doors in 2015 (a few doors down from the Brisbane Brewing Co.) and have instantly become ingrained in the local community (it’s hard not to with their innercity location) and has quickly amassed a strong following of beer lovers, all keen to return to enjoy the four-strong core range and soak up the sun-kissed atmosphere of their West End spot. 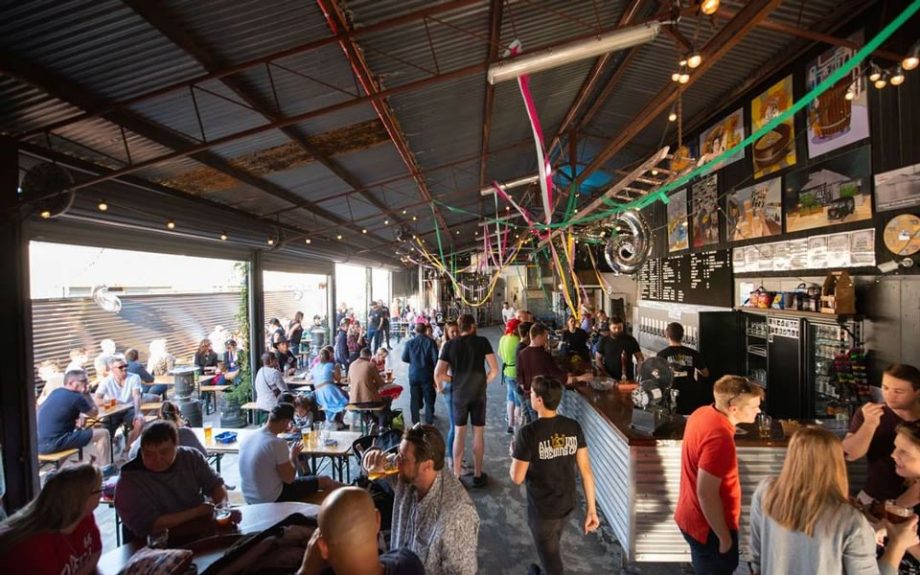 All Inn Brewing is all about being as environmentally friendly as possible. The team recycles whatever waste product they can, and refrains from employing processes that may be used by other breweries, such as leaving them unpasteurised and unfiltered, making them vegan-friendly. The core range is currently made up of seven brews, including a porter, an American pale ale and a session ale, served alongside an ever-changing selection of seasonal releases. The brewery bar itself holds a diverse range of events and it also plays host to a broad range of food trucks. 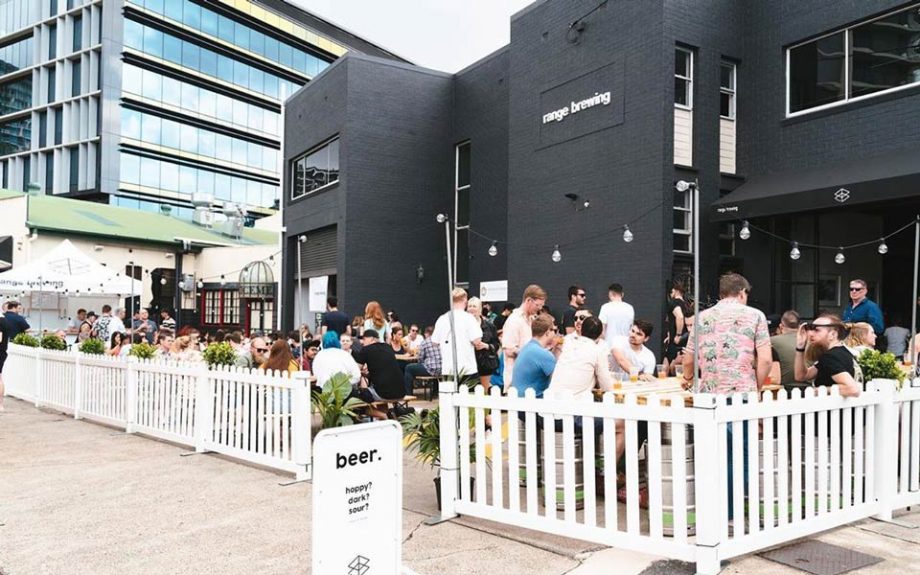 Range Brewing is the brainchild of childhood friends Gerard Martin and Matt McIver. The duo conceived the idea of opening their own brewery while living in London, and after much research conducted at breweries around the world, felt educated enough to be able to go it alone. Their brewery opened in Newstead in 2017 with a specific goal in mind, both in terms of the beers produced (there’s no core range, but rather a constantly rotating selection which can be found on the website) and design (the space is minamlistic to say the least, with inspiration being drawn from Scandinavia). 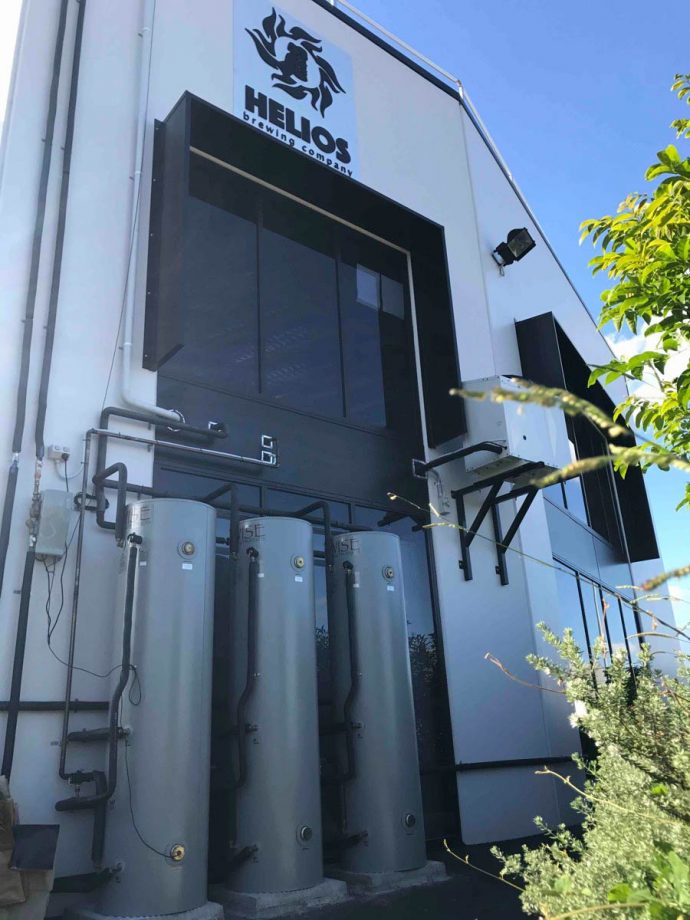 While it’s true that more and more companies – breweries included – are turning their attention to the environment and ways they can make their everyday processes greener, we’re not sure many other breweries are quite as environmentally friendly as Helios Brewing. The majority of the venue is powered by the sun, waste product goes to farmers and heavy use of insulation means there is much less need for electricity (the venue even provides power back to the grid). Fortunately, all that tech isn’t put to waste, as Helios makes some delicious brews. With all beers named after Greek gods (Helios is the Greek god of sun) you’ll be feeling pretty mighty after savouring the American style range. 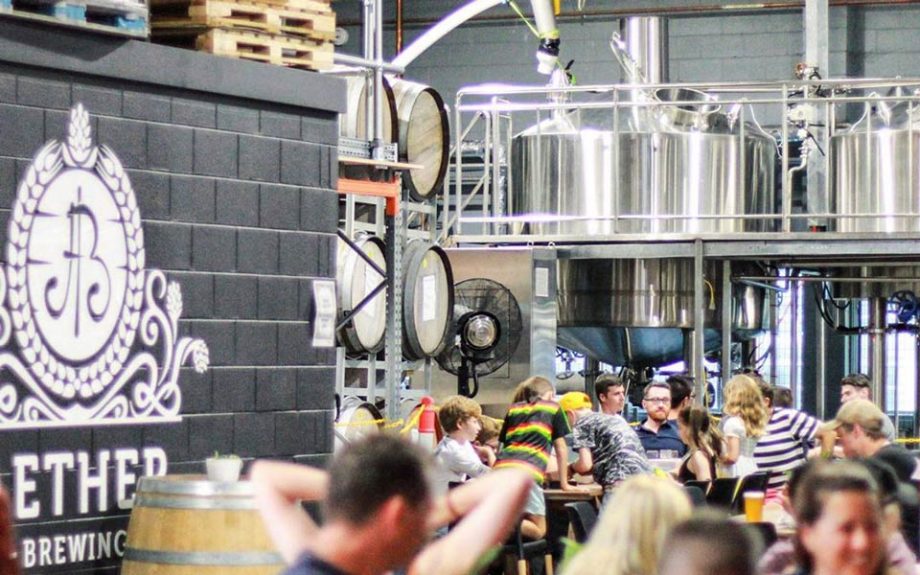 Another brewery with Greek mythology running through its veins is Aether Brewing. Founded in 2016 by two best friends who have since parted ways, forcing the brewery to move from its original Milton location to Northgate, Aether has continued to develop beers that bring the local (and wider) community together. Those beers include a New Zealand style pilsner and a lager, alongside other traditional varieties including a west coast IPA and a pale ale, with more exotic brews such as a blackberry sour joining the ranks. The brewery itself is a welcoming venue, and can put you in the heart of the action by way of benches flanked by the tanks in which your beer comes from. 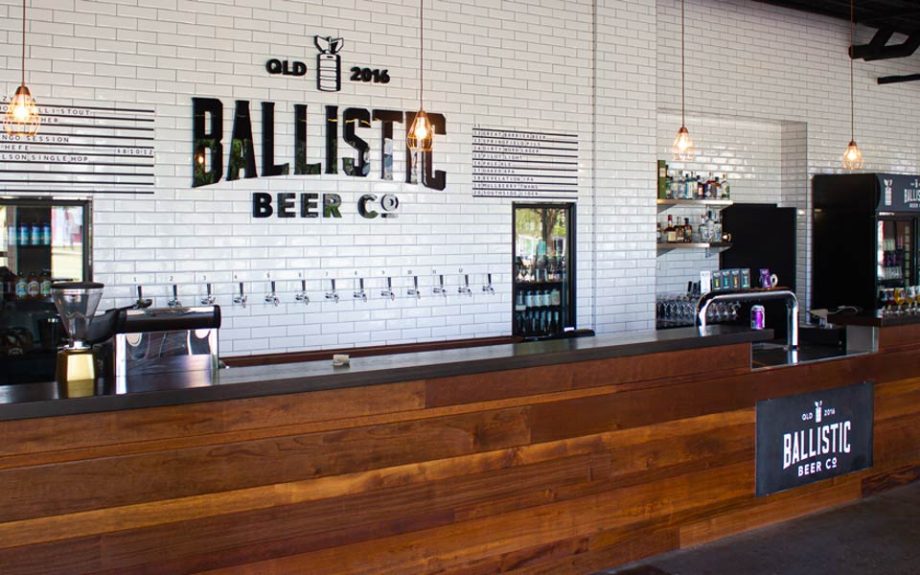 Ballistic Beer Co. could be seen as being a little greedy in Brisbane, as the brewery has three venues! The Salisbury HQ is the original site and found inside an old World War II ammunitions factory (which provided inspiration for the name). Both the Salisbury and the Springfield venues have operating breweries, with the West End venue being a more simple bar serving the range. That range consists of five core beers, brewed alongside a speciality range and a couple of seasonal releases.  Ballistic also brews a huge range of other drops, but we’ll leave you to discover them for yourself. 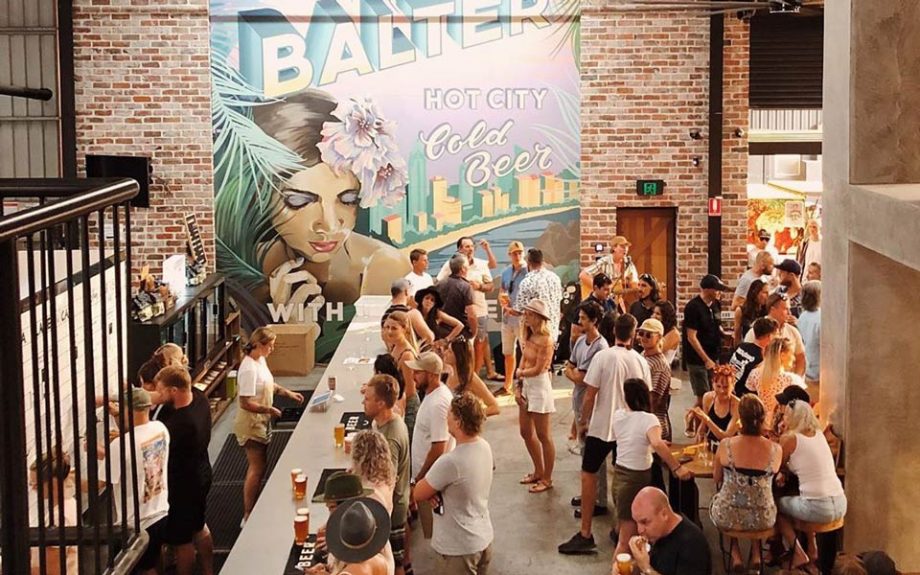 Technically not in Brisbane, but around an hour drive south from Brisbane CBD, Balter Brewing Co is a brewery you have to visit if you’re in the area. The company is well-known around Australia for its thirst-quenching, delicious beers and the fun, positive attitude it has towards brewing. Very much believing that beer is a drink to be enjoyed in groups and to bring people together, Balter is a beer by the people, for the people. The team only set up shop in 2016 but in the few years since have won numerous awards, both from industry judges and public vote competitions, meaning you can be assured of some of the best-tasting brews not just in Brisbane, but the whole of Australia.