Looking for the best breweries to sink a few beers in Melbourne? Then you’re not going to be spoilt for choice. need to be checking out the incredible selection of breweries just itching to sling you their latest craft beer creations and educate you on the complete brewing process.

Not only do these breweries sling some salaciously delectable beers, but they’re also perfect places for weekend drinking sessions, with some hearty food on offer too.

But which ones should you be putting at the top of your ‘to-visit’ lists? Allow us to guide you through the best breweries in Melbourne CBD and the surrounding suburbs.

In this Melbourne craft breweries story…

Here you can try the full range of beers for yourself, and believe us, you’re going to want to set some serious time aside. This is because Colonial’s range really is diverse, encompassing sours, porters and ciders, along with conventional pale ales and IPAs. With a full kitchen serving up declicious food alongside their beers, this is one place you’re going to want to visit again and again.

Two Birds is owned and operated by female duo Jayne Lewis and Danielle Allen, who also take the title for opening Australia’s first female-owned brewing company. “The Nest” as it is affectionately called, began brewing in June 2014, a few years after the girls launched their first beers.

A visit to the Two Birds tasting room will result in trying a fine selection of incredibly drinkable brews, the majority of which come in on the lighter side. Make sure to try their taco beer as it’s the perfect balance of zesty and fruity.

Hop Nation takes its name from the fact that its brewers enjoy experimenting with hop-forward flavours. Some beers are barrel-aged too since owners Sam and Duncan are former winemakers and so felt it necessary to experiment with bringing together the production methods.

A visit to the taproom in Footscray will reward you with some 15 beers on tap – including the incredibly popular Jedi Juice – including some limited releases that you won’t find anywhere else. You can also sample the fermentation beers and wines.

Urban Alley was founded in 2015 and in its first year alone racked up a number of awards. Today, the range of beers brewed at the Docklands site is extensive, with many of the classics taken care of. Think lager, dark ale and both Australian and American pale ales. Throw in some interesting choices such as an oatmeal stout a mid-strength tropical ale, and you’ll certainly be spoilt for choice. 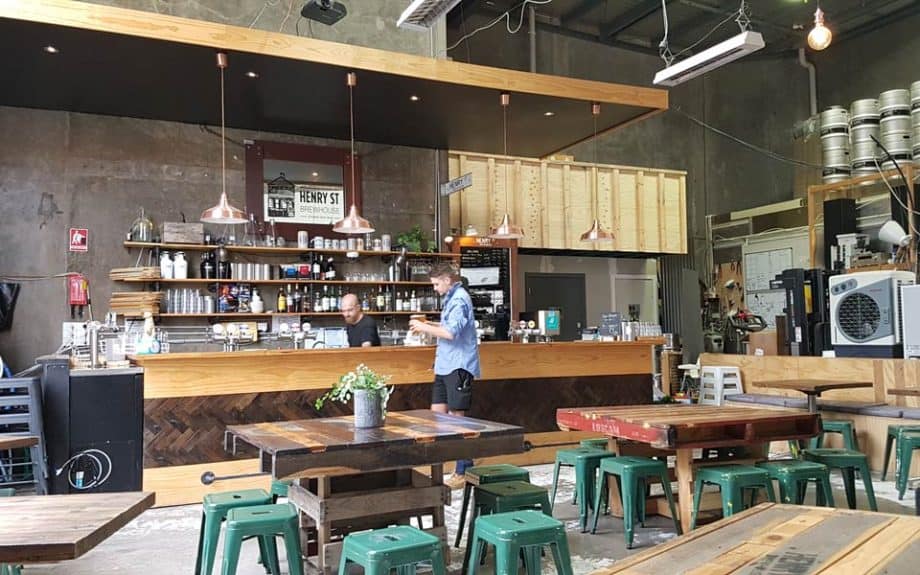 This microbrewery may not have as big of a name as some of the others on this list, but it holds its own by brewing a five-strong range of core beers, which you’re able to sample (along with up to five other experimentation beers) with a visit to the small but sweet brewery bar.

There’s no kitchen churning out food, but you’re able to order takeaway to the venue should you wish. Henry Street Brewhouse also offers a keg hire service, so you can fuel the ultimate house party.

Also situated in Kensington is Bonehead Brewing Co. Founded in 2016 by two self-described ‘boneheads’, this venue offers short tours for any curious customers, as well as 12 taps pouring not only the core range but limited, seasonal and micro-batch brews as well. It’s not the biggest taproom around, but find yourself a seat and you’ll find yourself hard pushed to leave.

Stomping Ground is a drinking establishment so big you could easily forget there is actually a brewery on site. Found in Collingwood, Melbourne’s ancestral home of all things brewing, Stomping Ground – an independently-owned space – creates some 60 beers each year. The vast majority are limited releases, which you’ll only get to sample at the beer hall, but you’ll be able to see how they’re made with a three-hour tour that includes a six-strong tasting paddle at the end.

With a name like Bodriggy, you shouldn’t be surprised to learn that this brewpub is inspired by Central and South America. It’s a huge space with room for up to 400 thirsty customers, and an equally huge bar pouring some 64 beers.

Naturally, ales dominate the menu, including a New England IPA and an American-style Pale Ale. Team these with a menu that includes tacos, empanadas and spiced marinated chicken and you have yourself a watering hole you’ll want to make repeat trips to.

Fixation Brewing puts a heavy focus (or, fixation) on brewing the very best IPAs. Having won a few award since its founding in 2015, we’d say the team has certainly managed what it set out to do. A visit to what Fixation refers to as “The Incubator” will allow you to sample the varieties, meaning you can really decipher what it is that makes a West Coast IPA different from a Session IPA, for example. If you’re hungry, Red Sparrow Pizza, located next door to the venue, will be on hand to deliver.

Temple Brewing Co. has a huge selection of mouth-watering beers on offer at its taproom in Brunswick East. Don’t believe us? With names such as Cakepricot, an Imperial Dessert Stout and the 888 Mandarin Ale, not to mention Temple’s Bicycle Summer Ale, a custom blend of seven different hops, you’ll come away with a completely new appreciation for beer.

Moon Dog has a couple of venues in Melbourne. The original site and more central location is in Abbotsford, but a second site; Moon Dog World in Preston, is quite simply, massive. Moon Dog World has space for over 700 customers, has a waterfall focal point, including a lagoon, kids playground and even a tiki-themed disco bar.

It’s a short drive from the CBD to get to, but the taxi fare will be well worth it, not just for the experience, but for the eclectic range of beers on offer, which includes traditional varieties such as pale ales and lagers, along with interesting concoctions such as an Apple Crumble Dessert Sour and a Chocolate Biscuit Milk Stout.

Mountain Goat Beer has been brewing since way back in 1999 and was set up by a man called Dave and a man called Cam (who, before a trip to Vancouver, wasn’t the biggest fan of beer). The brewery has an ever-changing selection of beers on tap which comprises the core range alongside other specialities including barrel-aged beers, limited releases or single kegs of current experiments. Unlike some other venues, Mountain Goat is open late, rather than during the day, and offers free tours.

Fury & Son is run by a father and son team – Fury is said to refer to dad Reno’s temper – who had been brewing together at home for some 15 years while involved in their own respective careers. Eventually, in 2016, they decided to go into full-production commercial brewing and took over a warehouse in Keilor Park. The taproom allows guests to sit right next to the vessels that the beer is brewed in, which can be enjoyed with BBQ food.

It would be hard to accept that The Mill Brewery is only run for a four-strong team, such is the quality and quantity of the product it outputs. Found in Collingwood, The Mill has had the doors open since 2017 and comprises a taproom with nine taps pouring its delights, although says that one of them is always reserved for “nitro poured beers”.

With a core range that reads off a Pale Ale, a Pilsner, an American IPA and a Dark Ale alongside other such wonders as a “Hard AF Lemon & Lime” Seltzer, The Mill Brewery proves that good things can come in small packages. 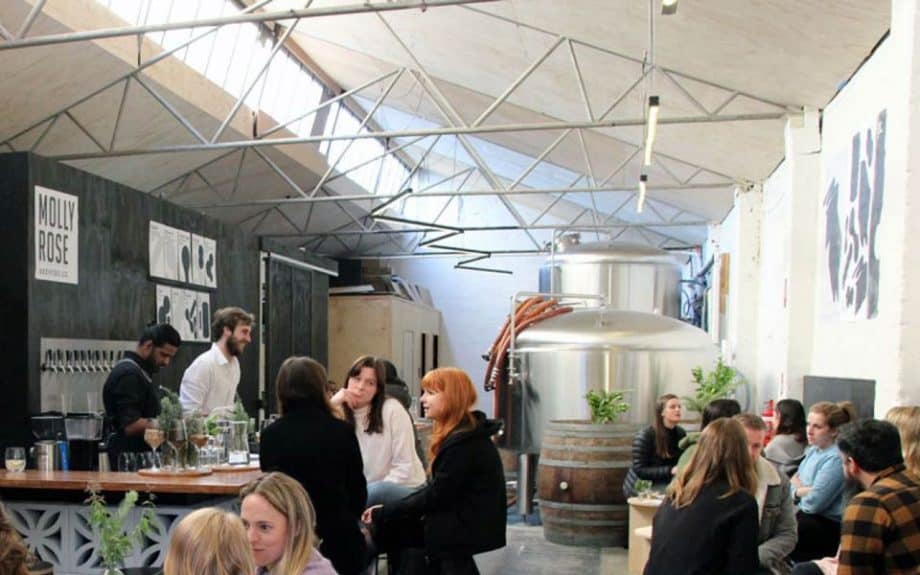 A stone’s throw from The Mill is where you’ll find Molly Rose. The brainchild of owner Nic Sandery, who can list Little Creatures, Stone & Wood and Holgate Brewhouse on his resume, along with a few wineries in Victoria.

He’s also experienced how beer is made in various countries around the world and has been able to channel that knowledge into his own product. The brewery and taproom can be found in an old furniture store, where you’ll be able to sample a wide range of changing beers, toasties and wine (if you fancy).

This local brewery is the epitome of Melbourne’s craft beer scene, but you must be pre-warned that these beers are not for the faint of heart. When Casey Wagner launched this San Diego style brewery, he started with merely a 500-litre Braumesier, two fermenters, a few long communal tables, solely focusing on brewing beers inspired by the American West Coast.

Since then, Westside Ale Works has doubled its venue size and has two 2000L fermenters, getting freshly brewed beer out as fast as they can. With 30 independent beers on tap, you’ll definitely find something that speaks to you.

Tallboy & Moose is one of the finest craft breweries tucked away in Raglan Street, Preston, created by two friends, Dan and Steve, who have mastered the art of brewing. Tallboy & Moose offers a wide selection of in-house brewed beers suited for every man’s palate and are available on tap or giant 1L cans for takeaway.

Also, their Wee Man’s kitchen serves some of the most delicious hearty pub food that’s guaranteed to hit the spot after downing a few pints. In the mood for hot chips, burgers or even a deep-fried mars bar? They have you covered.
Tallboy & Moose