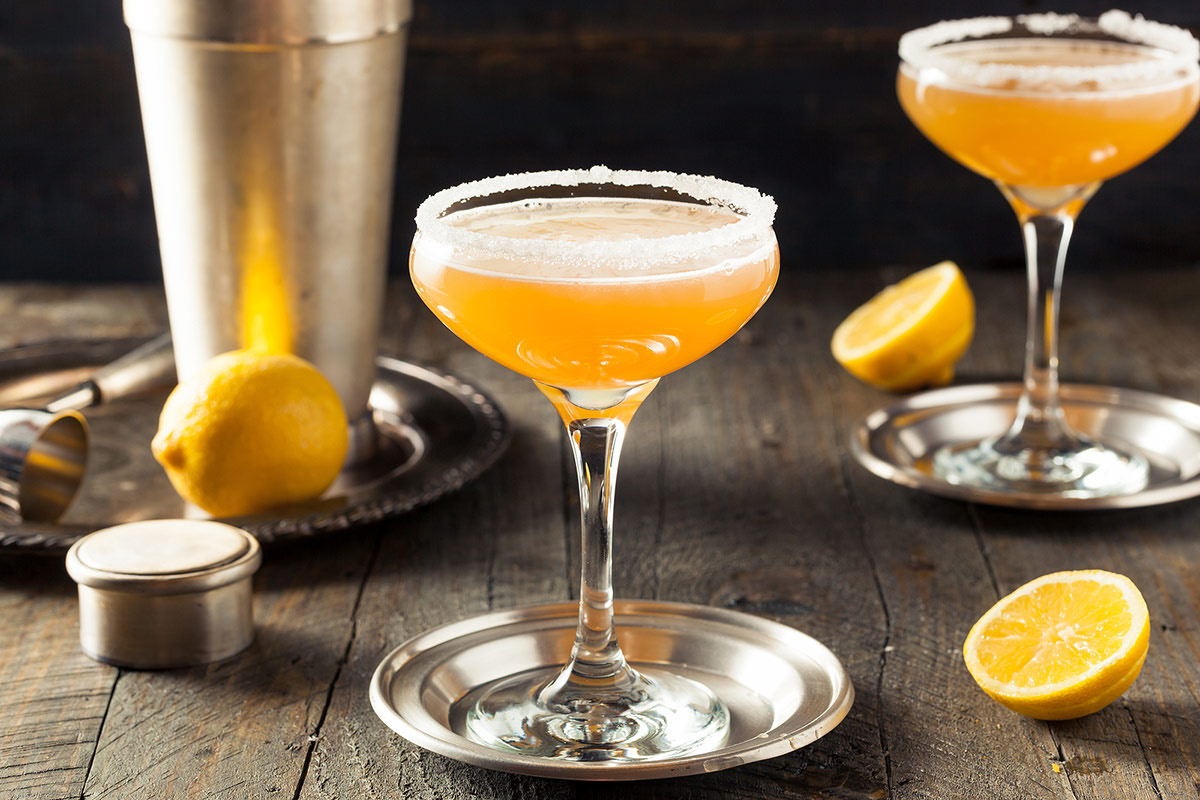 When asked to conjure up an image of a ‘man’s cocktail’, chances are you’re going to think of a Negroni or an Old Fashioned in a large rocks glass. But for Australian guys who enjoy drinking the oft-forgotten Cognac, one of the best cocktails based on the much-loved spirit is the Sidecar, served in a cocktail glass.

The delectable drink has a rich, if not confusing history (its origins are long-debated) but suffice to say, the combination of Cognac, orange liqueur and lemon juice drunk from a glass with a sugared rim, makes it a sweet treat to enjoy any day of the week.

Never heard of the Sidecar? No problem. We’re here to reveal all there is to know, including the all-important recipe. Think you know the Sidecar? Read on to learn about some variations.

Origins Of The Sidecar Cocktail

As we alluded to earlier, the exact origins of the Sidecar cocktail aren’t set in stone. It’s believed to have been invented in the late 1910s, around the same time the First World War came to an end. As for where it was invented is subject of debate, with both London and Paris staking a claim.

The most common story, which takes place in the period of Prohibition in the US, suggests American bartender Harry MacElhone was sent to Europe to continue practising his trade. He gets himself a job at Harry’s New York Bar in Paris, and invents the Sidecar, named so due to the fact the customer in question who ordered the drink was driven to the venue in a motorcycle sidecar.

If you’d rather believe the British version of events, the Sidecar was said to be invented by Pat MacGarry, a bartender at Buck’s Club in London. The recipe for this Sidecar also appeared in 1922 in the book Harry’s ABC of Mixing Cocktails, published by the same Harry MacElhone who claimed to have invented it himself in Paris.

It seems Harry wants to take the glory for this one.

No matter which story you believe, both agreed the Sidecar was made from the same ingredients and the same proportions – a feature no longer used today.

Because of the period in time it is said to be invented, the Sidecar is classed as a Prohibition drink. But with an ingredients list that reads remarkably similar to the Brandy Crusta, a cocktail invented in New Orleans in the late 1800s, it may not be as Prohibition-y as first assumed.

The Brandy Crusta not only provides inspiration for the Sidecar as a whole but is also the drink that paves the way for the Sidecar’s sugared rim. Some Sidecar purists will insist you shouldn’t sugarcoat it, so it will come down to personal preference.

For a Sidecar to be a Sidecar, it needs to comprise three ingredients, with your preference of garnish:

While a truly classic recipe will call for a 1:1:1 ratio of measurements (known as “The French School”), many believe it to be too undrinkable. Modern-day recipes, therefore, call for a 2:1:1 ratio of the three ingredients (known as “The English School). You may want to play around with exact measurements to find the perfect taste for you. To start you off, go with the following ‘official’ recipe:

How To Make The Sidecar Cocktail

To make a Sidecar cocktail, follow these simple steps:

Expert Twist On The Sidecar Cocktail

Of course, any gent with a fine cognac collection and a cocktail shaker can make a Sidecar, but what if you really want to wow your dinner party guests? It’s time to switch things up a bit. Hayley Dixon, Tequila Specialist at Proximo, a conglomerate that looks after some of the best-known tequila, whisky and rum brands, to get her unique spin on the classic Sidecar.

“The method for this one is very important.”

Thomas Lapeyre, Martell Brand Ambassador for Pernod Ricard Australia, is a man who certainly knows his cognac, so it makes sense for him to have his own way of making the classic Sidecar cocktail. He makes his using Martell Blue Swift, a spirit that is “one of a kind.”

“Made from Martell VSOP cognac finished in Bourbon casks from Kentucky, this unique spirit drink offers a world of creativity when it comes to cocktail making. And what could be better than putting a twist on tried and tested classics?

The Sidecar is the quintessential cognac cocktail, so re-exploring this signature classic with Martell Blue Swift is a must!”

How To Drink A Sidecar Cocktail

A Sidecar is best enjoyed in swanky city cocktail bar. Put on your best mobster-looking pinstripe suit, complete with a pocket square, of course. Shine your Derby or Monk Strap shoes, pull up a stool at the bar and be sure to tip your bartender.

You could also, of course, don your best Gatsby fancy dress and throw the party of all parties.

The Sidecar is, inherently, a rather sweet cocktail, with the sourness of the lemon juice on hand to help balance it out. It’s therefore incredibly drinkable, so make sure you have a lift home sorted before your night begins. As we mentioned earlier, experimenting with good quality ingredients can reveal various resulting tastes, which we expect you to find all equally delicious.

There are few variations of the Sidecar you may want to try too. You can confidently substitute the Cognac for an Armagnac or another good-quality brandy. Alternatively, you can switch out the brandy base entirely for spiced rum, and renaming the cocktail the Cable Car in the process.

With it being Cognac-based, the Sidecar certainly lends itself to being ordered in the colder seasons of Autumn and Winter, purely because the spirit has warming qualities compared to the more refreshing nature of gin and vodka.

Pour one, sit back in your Eames chair, stick some jazz on the turntable and you’re good to go.

A sidecar is like a lighter, fruity version of a whiskey sour. Its rich, tarty and sweet because of the combination of lemon, orange liqueur and Cognac.

Should you do the sugar rim in your sidecar?

Not necessarily. Sidecars are traditionally made slightly sour, so it is often served in glasses with sugared rim to compensate for the sweetness. At the end of the day, it is about your preference.

What are other manly cocktails aside from sidecar?

A manly cocktail is accredited by its ability to knock you down fast with its alcohol content. You can try the Manhattan, Tom Collins, Old Fashioned and Black Russian.