In a world driven by social media and radically publicised bouts of excess, there is no shortage of token millionaire ballers.

Dan Bilzerian pioneered it with his overzealous showboating of assault rifles, naked women and private jets and today he’s getting some classier competition. Say hello to the 49-year-old Italian business tycoon with abs known as Gianluca Vacchi.

Quick facts first. Vacchi went viral after posting a quirky and well-choreographed dance routine with his wife on Instagram. Along the way Vacchi managed to befriend America’s golden child Zac Efron and the pair immediately hit it off, going on excellent adventures together whilst documenting their yacht diving exploits along the way. This was bromance in the making at its finest.

Beyond this Vacchi has no shortage of disposable income as he’s the head of manufacturing company, SEA Società Europea Autocaravan. Paired with killer dad style to boot, a full head of hair, charming dance moves and a lavish lifestyle, Gianluca Vacchi is today the envy of middle-aged men leading a life more ordinary.

Here’s a few more things you need to know about the rise of the ‘GV Lifestyle’.

#1 He Basically Danced His Way To Stardom

He’s got moves that could destroy Jagger and he’s got the videos to prove it. With body rolls and co-ordination like that for an almost-fifty-year-old, it’s no wonder the tatted-up businessman is going viral.

We’re staunch supporters of dressing like an Italian here at D’Marge. So much so that we even did a guide on how to dress like an Italian. If you’re more visually inclined then simply look to Gianluca for some style inspiration. It’s pretty damn immaculate and oozes pure Italian charm.

#3 He Lifts (And We Don’t Mean The Surgery Type)

No Gimmicks, no surgery, no ‘good’ angles for Instagram. Vacchi is a machine at 49 and often shares his training routine with the world to prove it. With his perennially oiled skin, perfect tan and built frame, Vacchi is well on his way to pissing off an entire generation of lazy middle-aged men. And we love him for it.

#4 He Has An Epic Bromance With Zac Efron

Back in 2014 Zac Efron embarked on a holiday with Vacchi in Italy. Regardless of the twenty year age difference, the pair somehow managed to bond through their carefree antics which eventually brought them to the past time of topless horseback riding and synchronised yacht diving:

synchronicity…enjoy Z and me @zacefron

This was followed by even more dancing of the sychronised persuasion.

dancing on the table for girls me , Zac @zacefron ,youssef @youssefgiga

And just to prove that this wasn’t a one-time bromantic affair, Efron posted on his Instagram a solo photo of Vacchi with the caption: “To my friend @gianlucavacchi – the real life ‘most interesting man in the world’, never above you, never below – always by your side. Luv and respect.”

Someone cue Kenny Loggins’ ‘Playing with the boys’ please.

#5 He Partakes In Extreme Sports

Old doesn’t need to mean boring and Vacchi is taking this point rather literally. The social media star is an adrenaline junkie and wouldn’t look out of place in a Ken Block campaign with an immaculate dress sense complementing his skill behind two bars.

Take a look at the man casually riding his Harley Davidson down the street and you’ll understand.

Even jet-skiing in a suit doesn’t escape the wild pursuits of this tatted-up boss with charisma.

In life it doesn’t matter what you drive, is how you drive it that makes the difference. Enjoy #gvlifestyle

Now that you know who Gialuca Vacchi is, you can follow his journey on Instagram. He’ll make you smile and depressed at the same time. 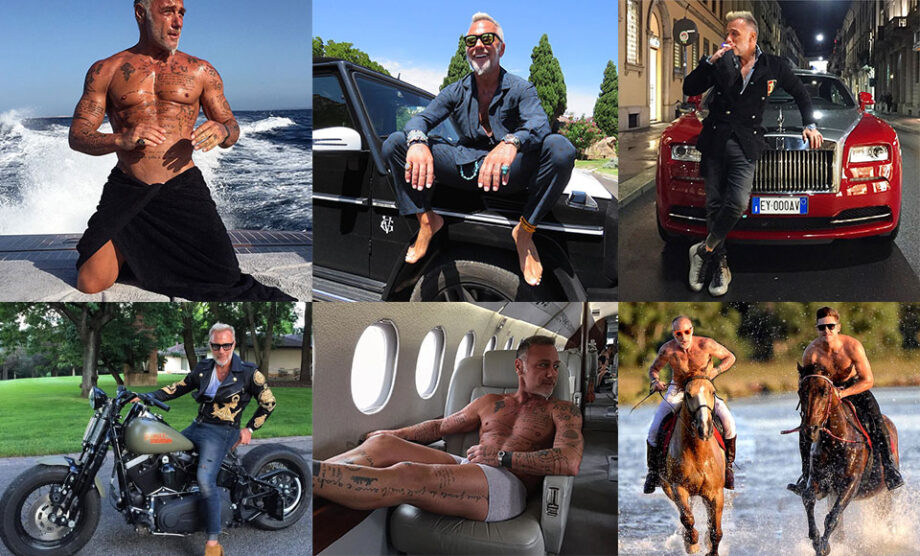 The not-so-secret life of Gianluca Vacchi