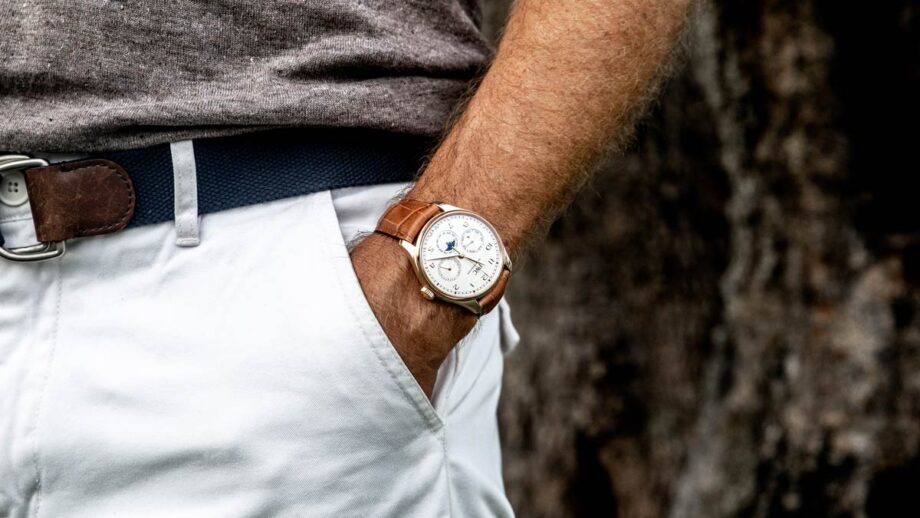 This feature has been produced in partnership with Kennedy.

IWC Schaffhausen is one of the most recognised names in the world of high-end horology. The watchmaker’s reputation for build quality, accuracy and design has been cemented through the release of several expertly crafted watch collections that have spawned imitations the world over.

Without doubt, one of IWC’s most famous lineages is the Portugieser, a timepiece that has a deep and meaningful history and one that has remained in production ever since its inception in the late 1930s.

The IWC Portugieser today redefines what should be expected from a sports watch, with its combination of both dress watch and sports watch features resulting in a piece that can be worn each and every day.

Before we get on to the 2020 IWC Portugieser collection, let us take a look back to see how the iconic wristwatch came to be.

The Portugieser collection takes its name from the nationality of two merchants – Rodriguez and Teixeria – who approached IWC in the mid-1930s with a request for a wristwatch that was large enough to easily read but had the precision of a marine chronometer. At that time, the only way IWC could meet the demands of the two Portuguese merchants was to use a pocket watch movement.

IWC had to specially develop a new movement to fulfil the request and the Mod.228 was the result. This movement was later renamed Portuguese before finally settling on its now-notorious nomenclature in 2015.

The Portugieser ref. 325 launched in 1939 with a huge-for-the-time 43mm case, accentuated further by the use of a thin bezel. In an attempt to increase its appeal, IWC developed several dial and hand colour combinations – black and gold, white and blue, for example – but sales never quite reached the company’s expectations. Not wanting to send the Portugieser family to an early grave, IWC released a Jubilee Edition in 1993 to commemorate the company’s 125th anniversary.

This model – and others released soon after – were launched in limited numbers and to a much greater reception, culminating in the release of the Automatic Chronograph ref. 3714, a watch that can be considered as close to perfect in terms of design as is possible, so much so it has remained virtually unchanged since its release in 1998.

Various models of the Portugieser will present different complications and dial layouts, but the Chronograph is the one that has remained consistently popular over the past three decades. Featuring sub-dials at 12 and 6 and IWC branding and model denomination at 3 and 9, it’s a beautifully symmetrical dial that is truly versatile, being suitable for both formal and informal occasions.

The 2020 IWC Portugieser collection has something for everyone. The archetypal design of Arabic numerals and Feuille hands can be found across the entire range, with various complications being implemented depending on the model.

Other standout models include the Yacht Club, a sub-collection of the Portugieser that pays homage to the family’s nautical heritage. The Yacht Club Chronograph is an incredibly well-executed sports watch, combining a 44m case with a stainless steel bracelet that appears to be integrated but in fact, attaches in a conventional manner.

Powered by the tough and feature-packed in-house manufactured 89361 calibre, complete with flyback functionality and 68-hour power reserve, it’s the perfect accompaniment on land or sea.

There is no other watch quite like the Portugieser. For it to have remained timeless and to consistently receive the same positive response speaks volumes of IWC. It is a truly special piece from a special company.