When you’re tired or bored it’s tempting to let infantile instincts come to the fore. However, unless you’re less than 3 years of age, drooling all over yourself semi-consciously isn’t cute. So why do we keep seeing men hunched-over (or head lolled-back—take your pick), snoring-up shopping centres all over the country?

It used to be limited to the abandoned-boyfriend armchairs outside of H&M changing rooms—but seems to be spreading. And apart from being a crime-against-Westfield, it reveals a lot about your health.

“The person napping in a shopping centre would either have not had enough sleep due to lifestyle choices, or be affected by drugs or medication, or have a sleep disorder. The best sleep is the one that you have in one chunk and it is important for us to prioritise our sleep and seek help if we aren’t getting enough.”

However, although a shopping centre isn’t the place to do it, Dr Junge also pointed out that a nap of less than 30 mins is beneficial, as long as it’s, “A long time before you go to bed for your major sleep period”. She then added, “Our primitive ancestors did not sleep in one big chunk, they slept in different periods throughout the 24 hour day; they were effective nappers”.

That said, when asked if she would ever sleep in a shopping center she had this to say; “I would wait until I was in an appropriate place. People who have excessive daytime sleepiness need to address if they are getting enough sleep, or if they may have an underlying sleep disorder that needs to be addressed and treated.” 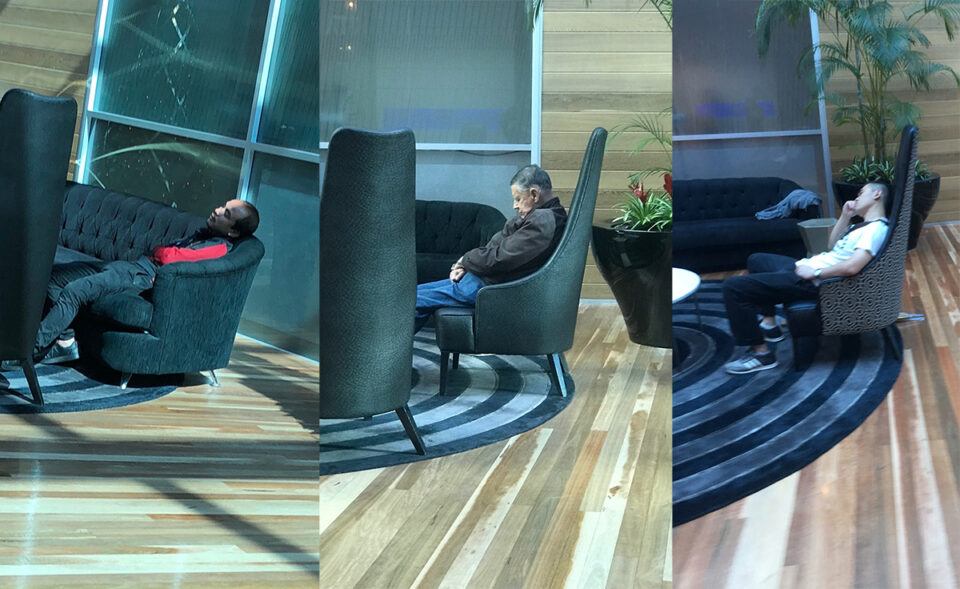 So if you’re guilty of enjoying the odd public siesta, you have three options: sleep longer at night, plan your day better (i.e. don’t go shopping in the middle of the afternoon) or simply: harden up. As our sleep specialist says:

“A small percentage of the population who have a sleep disorder need to nap throughout the day, and the general population may have a sleepy period in the afternoon, but mostly should be able to resist the urge to nap”

Also, according to Rosemary Clancy, a clinical psychologist at the Sydney Sleep Centre, if you find yourself falling asleep during the day and sleeping long hours at night, you may have Obstructive Sleep Apnoea (OSA)—a breathing-related sleep disorder—which, “Is rising in the community, because of obesity and diabetes type II frequency increasing in the Australian population.”

But tell us: what do you think? Is sleeping in a shopping centre an acceptable way to get over a hangover, or a sign you’ve given up on life?

Related: If You’re Going To Sleep At An Airport, This Is How You Do It