Think luxury watches and your mind will more than likely deviate towards something of a Swiss persuasion. Sure, the Swiss are known worldwide for their output of exquisite timepieces that have become just as much everyday fashion accessories as they have exemplary time tellers.

But one luxury watchmaker that more than holds its own amidst the sea of the Swiss invasion is German marque A. Lange & Söhne. Founded in 1845 by one Ferdinand Adolph Lange in Glashütte, Germany – the first watchmaker to establish itself in the town, paving the way to it becoming the watchmaking capital of Deutschland – but falling victim to nationalisation in 1948, the high-end watch brand made a successful comeback in 1990.

The second-coming of A.Lange & Söhne was thanks to Ferdinand’s great-grandson, Walter Lange, and the company’s continued success and global notoriety can be put down to a takeover by the Swiss Richemont Group, which acquired A.Lange & Söhne in 2000.

Whilst there may now be some Swiss blood flowing through the veins of this exquisite watch brand, it remains unmistakably German. An A.Lange & Söhne watch (as well as other watches to hail from Glashütte) can be easily identified by a few defining characteristics, such as a three-quarter plate whereby a German silver top plate covers some three quarters of the movement and ribbing decoration on the movement itself.

What gives Lange watches their premium status is the fact every single movement is assembled twice before it makes its way to your wrist. It’s this kind of process that gives the German watchmaker such an esteemed reputation, and there is plenty of method to it. The company says that the first assembly is where all the intricate parts are assembled and adjusted to the highest degree of accuracy. They are then taken apart and painstakingly cleaned and polished to rid them of any fingerprints and blemishes to ensure they last as long as possible.

Adding to their specialist nature is their consistent use of high-end metals. You’ll only find one example of a stainless steel watch, for example, – in the Odysseus – otherwise, all other watches use yellow gold, rose gold, white gold or even platinum. And if you were hoping for a quartz movement, you’d better look elsewhere, only mechanical (manual winding and self-winding) movements here.

Of course, as with any luxury watchmaker, notable models exist in their droves, so compiling a shortlist of the best pieces is no easy task. But we like a challenge, and so we’ve put together our definitive list of the best A.Lange & Söhne watches for you to buy. 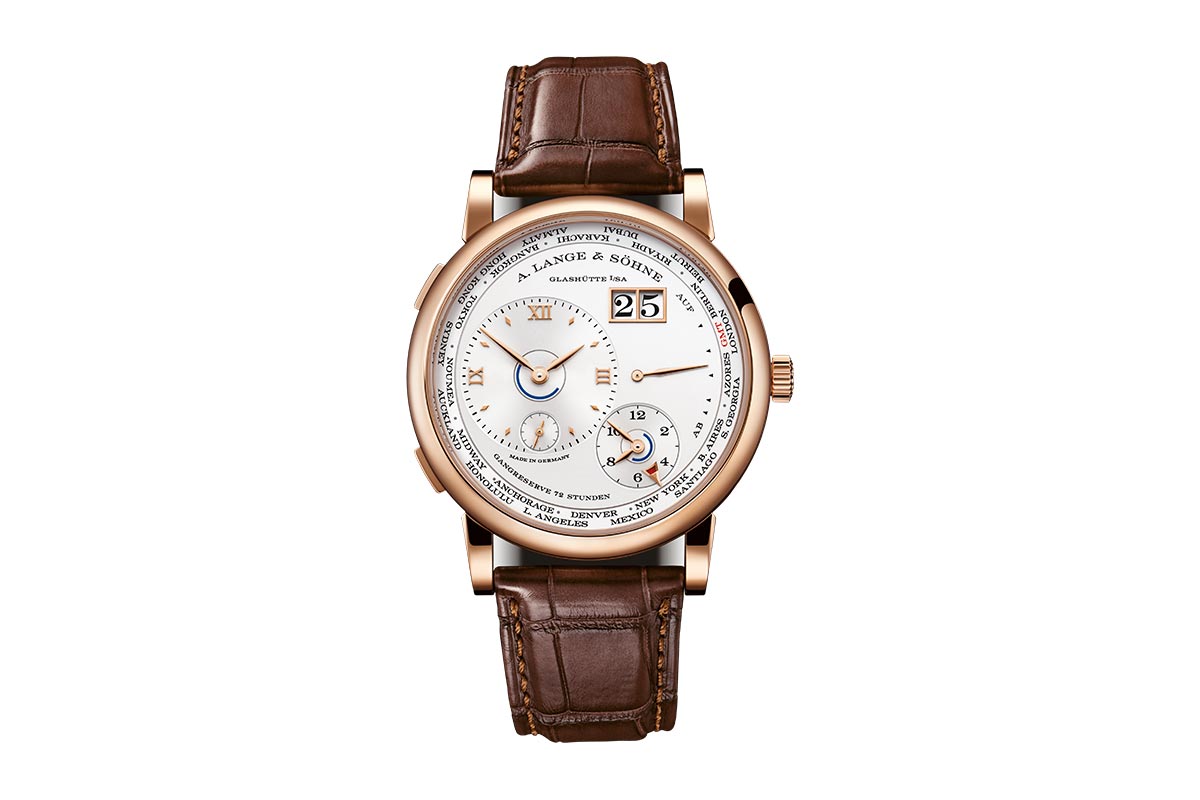 Available in a few colour options (including a limited 100 pieces yellow gold) it’s the pink gold model that stands out for us. As the name suggests, this watch can display the time in a second time zone, but the way it does so is a touch of genius. In the centre of both the main sub-dials (representing two different time zones) is a half blue disc. When the hour hand is over the blue section, it represents PM in that respective time zone.

Other touches include being able to swap out the large dial for home or local time, depending on how you see fit. This is thanks to the Lange 1 Time Zone’s ability to have its hour hands (for both dials) set independently, rather than be adjusted in unison as is the case with some other multi-time-zone watches. 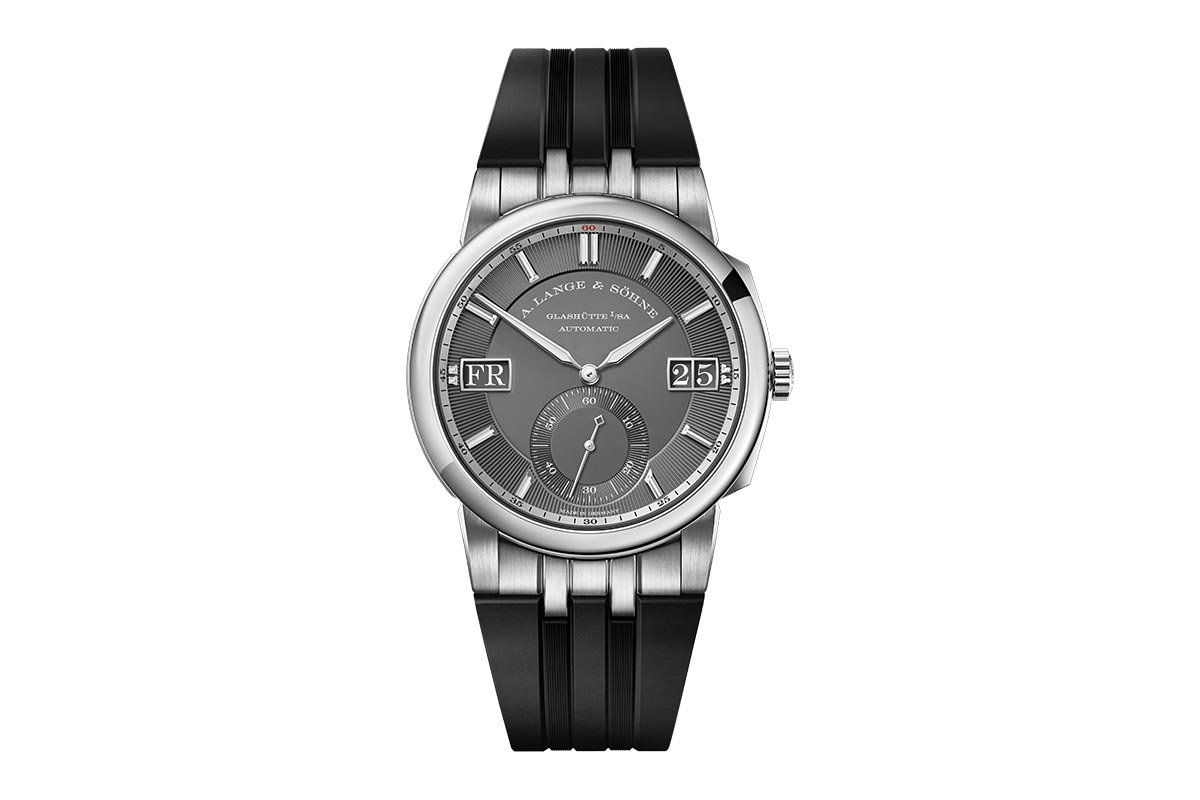 Yep, Lange does sports watches too. The Odysseus heads the company’s charge into the sector, and was only released in 2019 in stainless steel (the only instance you’ll find the material in the Lange line-up, making it quite the rarity). This white gold model, released in 2020, takes the same sporting credentials and head-turning looks and propels them into the luxury space.

The Odysseus gets its own movement in the form of the L155.1 Datomatic, which boasts a 50-hour power reserve and 312 components. These work together to power the complex day/date mechanism, which sees the date separated into units and tens discs, which are driven by a program wheel. Whilst you can see the movement hard at work via the see-through caseback, you’ll be too enamoured with the front of the dial – presented in grey – as it sees the day and date presented in an extra-large format.

And, in a first for Lange, the Odysseus gets a rubber silicon strap, further cementing its sporting credentials (and is the one we’d go for). 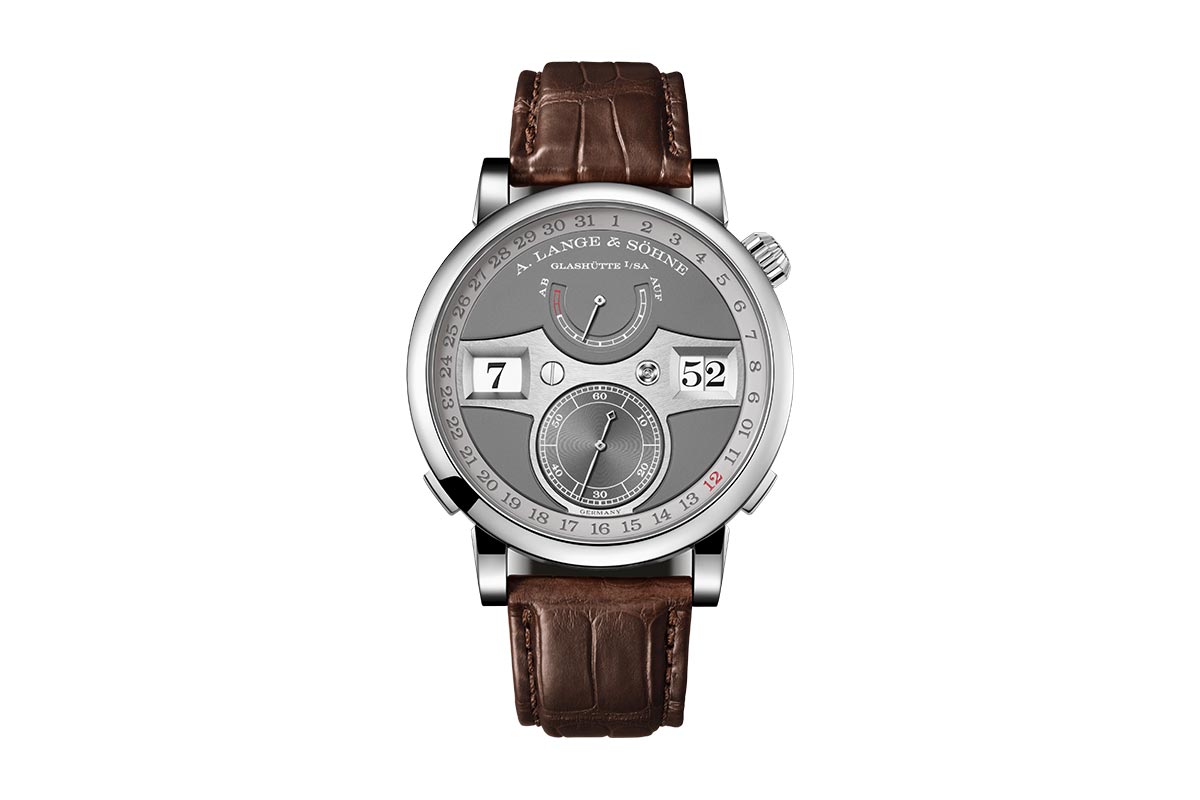 One watch that perfectly demonstrates just how technically gifted Lange is as a watchmaker is the Zeitwerk Date. The Zeitwerk, originally released in 2009, was already a visual masterpiece thanks to its jumping hour and minutes display. The Zeitwerk Date adds a jumping date mechanism into the mix, which sees the current date highlighted in red. The movement required to power such a display is incredibly complex, not only to achieve a perfect change of all complications at midnight, but to maintain accuracy.

Visually, this is classic Lange: a watch that will turn heads wherever you go. The subtle red accents provide plenty of pop against the monochromatic grey and white dial, and the white gold case treatment exudes luxury. 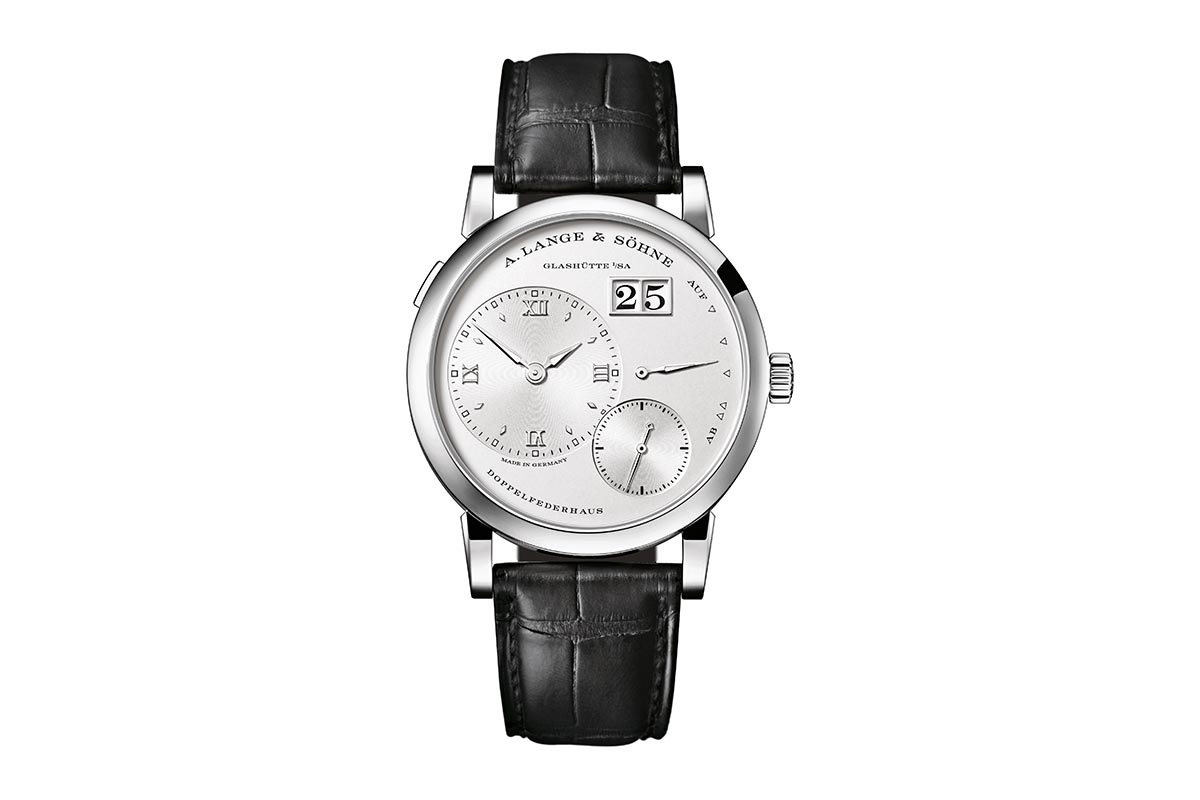 Less imposing than its Time Zone cousin due to its smaller case diameter, the Lange 1 White Gold exhibits all the qualities needed for a luxurious dress watch. This particular model was launched in 2016 and was on the receiving end of a calibre upgrade, specifically, the L121.1. But, rather than give the outgoing movement a couple of tweaks, Lange essentially rebuilt it from the ground up.

One of our favourite qualities of this new movement is that it features Lange’s patented Zero-Reset mechanism. This sees the second hand always stopping at zero whenever it runs out of power (a mean feat, considering it has a 72-hour power reserve) meaning you will always be able to accurately reset the time. 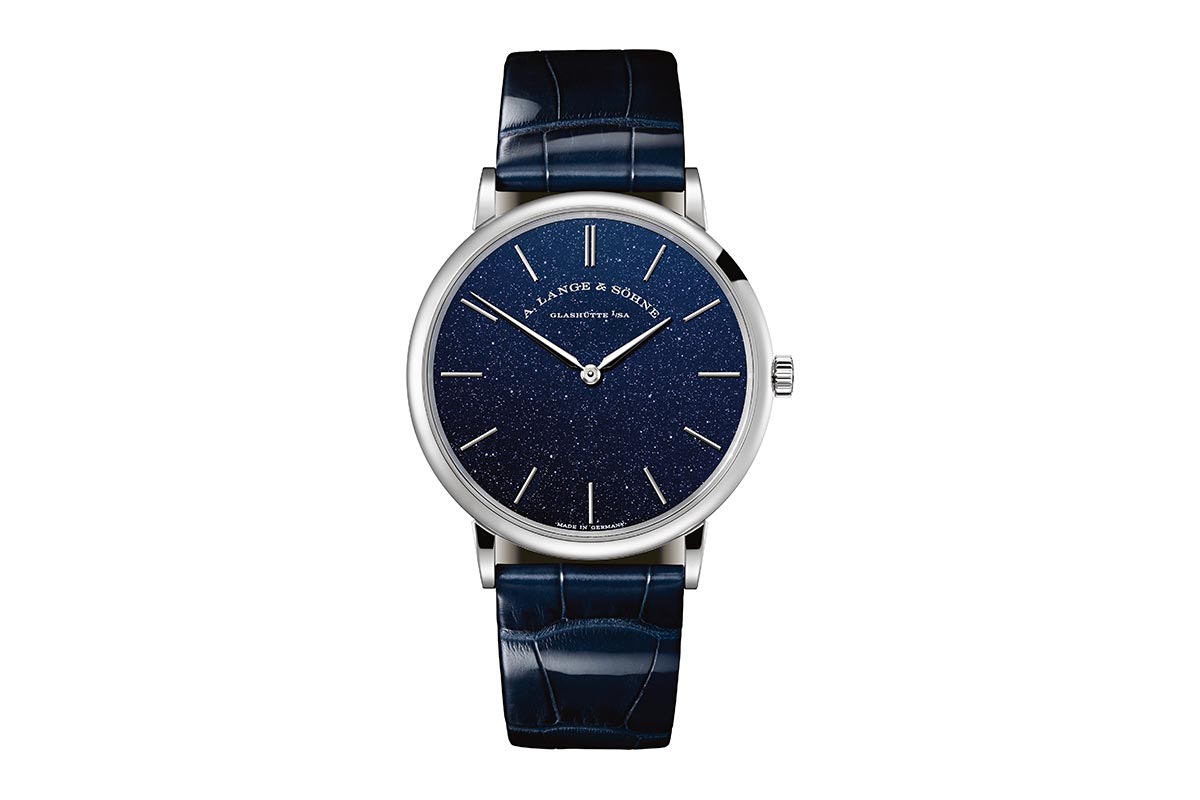 The Saxonia Thin offers an ideal gateway into the world of this esteemed German watchmaker. This Copper Blue model, released in 2018, also brought with it a new size for the Saxonia Thin at 39mm – some would say it’s the perfect size for a watch.
The highlight of this model, however, is the finish on the dial

Without any complications to attract your gaze, the dial finish needs to be something special, and it is. Lange has made the dial from solid silver and applied a thin layer of a copper-blue gold flux. What you’re left with, is a shimmering dial that reacts beautifully to light from all angles. With blue dial watches being all the rage right now, this Lange Saxonia Thin offers a unique approach, however, with it being an incredibly rare piece, we recommend you contact your local A.Lange & Söhne retailer in a bid to track one down.

The Datograph has long been one of Lange’s most celebrated timepieces, and one that has found affinity with many watch collectors. The Up/Down – successor to the original Datograph – launched in 2012, brought with it an increase in case size, up from 39mm to 41mm. Other changes include a power reserve indicator (from which the watch takes its name) and an updated version of the L951.6 calibre to power the reserve indicator, and to increase the power reserve from 36 hours to 60 hours.

What is particularly endearing about the Datograph Up/Down (and its predecessor) is the aesthetic appeal of the movement. A.Lange & Söhne is widely regarded as creating some of the most beautiful movements around, but the Datograph offers something extra special and is very much a work of art, just as much as it is an example of truly technical watchmaking.

Another Lange timepiece that perfectly demonstrates timekeeping in its simplest form is this 1815 Up/Down in pink gold. A member of the family named after the year founder Ferdinand Adolph Lange was born, the 1815 Up/Down plays host to nothing but the time, running seconds sub-dial and a power reserve indicator, the feature from which the 1815 Up/Down – and the Datograph Up/Down above – takes its name.

While it may not have the most complicated complications ever, the 1815 is exquisite German watchmaking at its finest – no wonder it’s the company’s most popular model. The power reserve indicator – while not a unique feature to Lange – can, in this instance, have its history traced back to 1879 when the German watchmaker successfully filed a patent for the development of such an indication.

Today, much of the 1815 Up/Down’s success can be placed upon the movement. A completely new calibre – the L051.2 – it offers 72-hours of reserve power when fully wound and when viewed from the back, exhibits the 3/4 plate architecture that has made Glashütte famous.

The 1815 Chronograph takes the familiar 1815 design (two sub-dials at 4 and 8) but, unlike the 1815 Up/Down, utilises these sub-dials for chronograph counters. What’s more, the 1815 Chronograph features a flyback function, allowing you to immediately reset the chronograph hands to zero during a measurement. Lange even provides you with extra graduations on the railway track minute scale to allow for time readings to an accuracy of one-fifth of a second.

As for looks, you can’t get much better than the combination of black dial and pink gold in our opinion. Add the fact the movement is the same one found in the Datograph, i.e. an incredibly good-looking one, and you have yourself quite possibly the perfect chronograph watch.

The 1815 Tourbograph Platinum represents some of the very finest watchmaking. It utilises a fusée-and-chain transmission (a 15th century device that features a cone-shaped pulley which is wound by a chain and connected to the mainspring barrel) along with a tourbillon, chronograph, rattrapante and a perpetual calendar.

There’s perhaps too much going on in this watch to break down here, but if exquisite watchmaking is of any interest to you (and the fact you’re reading this, we imagine it is) we implore you to dig a little deeper into the inner workings of it. Essentially, for Lange to integrate so much into this watch is nothing short of remarkable.

Only 50 of these watches exist, however, and Watches of Switzerland recommend you contact your nearest A.Lange & Söhne boutique if you’re interested in buying one, as word on the street is only two examples remain.

Equally impressive in its technical merit is the Richard Lange Tourbillon “Pour le Mérite”. As with the 1815 Tourbograph above, this watch utilises a fusée-and-chain transmission. This helps to maintain constant energy throughout the entire unwinding process, in order to improve accuracy.

Other nifty tricks include a moving dial segment. The sub-dial for the hour (represented by Roman numerals) has a section that is only visible when the hour is between VIII and X. When the hour isn’t within this portion, the small dial segment pivots away, revealing the full tourbillon. For even greater accuracy, the entire movement can be stopped and set to one-second increments. True perfection.

Where To Buy A.Lange & Söhne Watches

Fortunately for Australians, you needn’t venture too far to secure yourself an A.Lange & Söhne watch, as the German watchmaker recently opened its very first Australian boutique in Sydney’s Martin Place. Found at No. 14, the boutique not only stocks some of the most popular models, but the store alone is something to marvel at.

Set over three levels and decorated to perfectly imitate its luxury timepieces, Lange’s Sydney boutique is also one of its largest worldwide, providing plenty of space for Australia’s luxury watch enthusiast community to peruse over the latest models.