The world of high-end horology isn’t exactly left wanting for manufacturers. Some, understandably, stand out more than others, whether it be due to the number of years served in the industry, or because of that one model that changed the way we view watches forever.

The watchmakers that really do earn themselves a place in horological history are those who truly innovate and are first past the post in technical achievements. One such brand that can tick those boxes is Bell & Ross.

What makes the French watchmaker a favourite among watch aficionados is how quickly it has cemented itself into the minds of the many, having only been founded in 1992. When you consider other esteemed brands were founded more than 100 years ago, it’s no mean feat for Bell & Ross to have earned itself a spot at a table surrounded by other prestigious brands in the affordable luxury watch sector.

Founders and childhood friends Carlos A. Rosillo and Bruno Belamich founded the company on a three-word philosophy: efficiency, legibility and reliability. These principles have helped catapult the brand into the minds of pilots, divers and even bomb disposal experts.

Notable accomplishments include kitting out the French Security Service’s bomb disposal squad and developing the Hydromax, widely regarded as the world’s most reliable watch, and capable of plunging to depths up to 11,110 metres.

What the brand is known today for, however, is its association with aviation, with many of its dials being exact replicas of – or heavily inspired by – aircraft cockpit instruments.

It gives Bell & Ross an instantly recognisable identity, but as you’ll see with our selection of the company’s best watches, it isn’t afraid to blur the lines between traditional and contemporary. 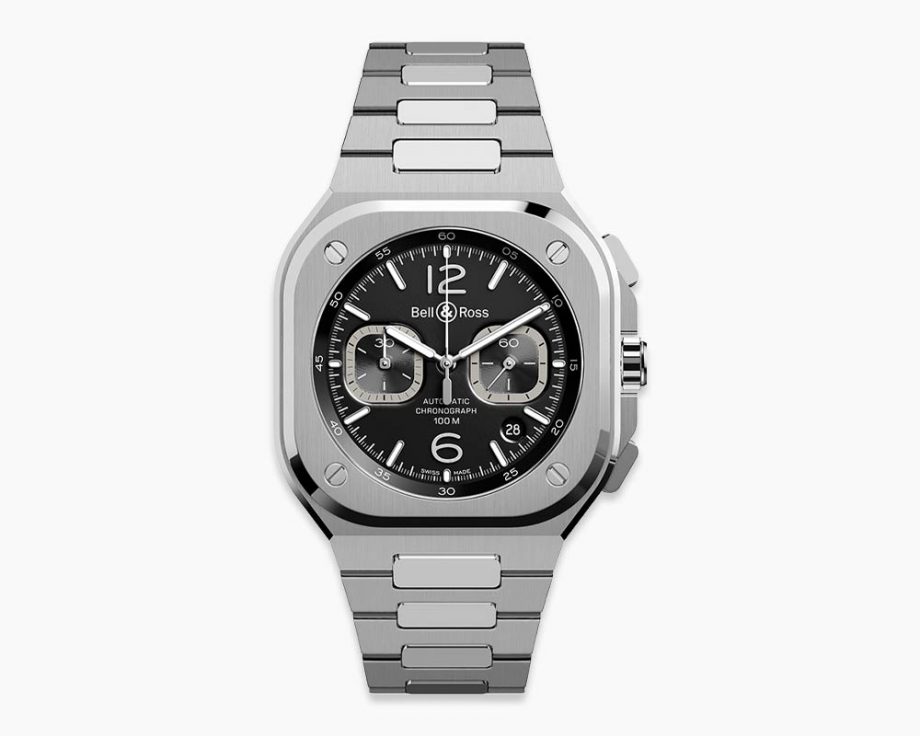 The latest release from Bell & Ross should immediately become a fan-favourite. When the BR05 launched in 2019, targeted at ‘urban explorers’, the square case paired with integrated lugs and circular dial brought the world of professional watches to the everyday watch wearer. The release of the chronograph version, however, transforms it into a far more useful timepiece.

Chronograph counters are a natural fit for the BR05 and they’re executed effortlessly here, replacing the 3 and 9-hour markers from its non-chronograph sibling. We’ve singled out the version with matching stainless steel bracelet and black dial, but you can also get it with a blue dial and colour-matching rubber strap. 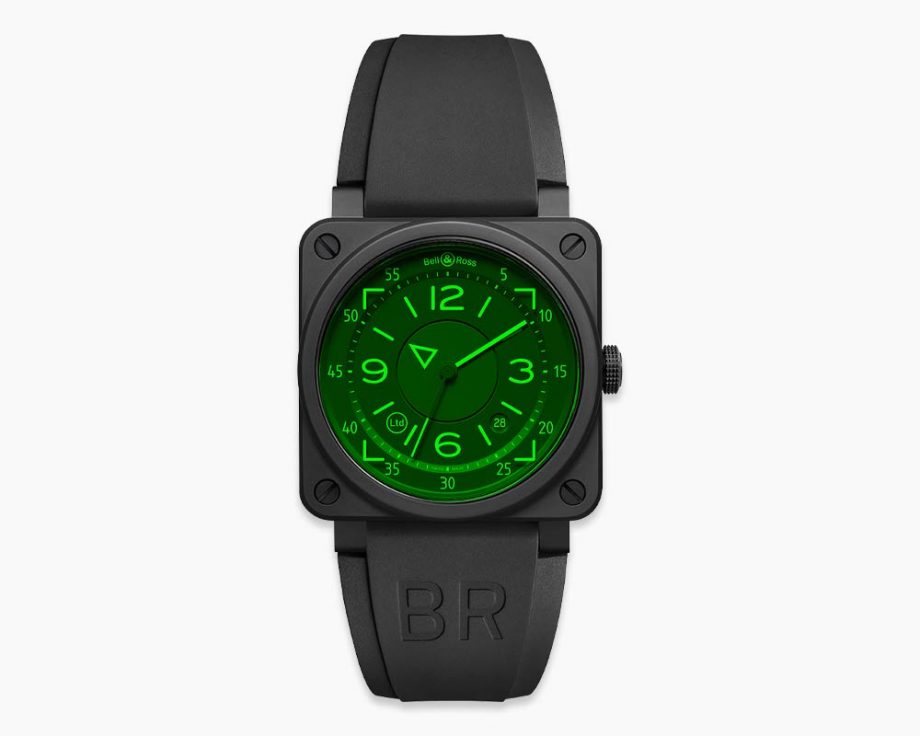 Without even seeing this limited edition BR03-92, you would’ve likely been able to conjure up an image of what to expect, given its HUD nomenclature. A quick glance at the dial and its immediately evident where Bell & Ross has procured its inspiration.

A Heads Up Display is an instrument used in planes to give pilots instant information without having to take their eyes off the skies. Their first use came in the British Spitfire aircraft to help fighter pilots gun down the enemy, but today they’re used to show other information including altitude and airspeed (of course, fighter aircraft still make use of them, we just don’t hear about them as much).

Bell & Ross’ interpretation is incredibly authentic in its execution, rocking green tinted glass and 90-degree markers. And, while you don’t get airspeed readings, you do get a small date window for quick reading. Other features include the hour hand revolving on a rotating disc (pretty cool) and it’s powered by the BR-CAL.302 calibre with 40-hour power reserve. 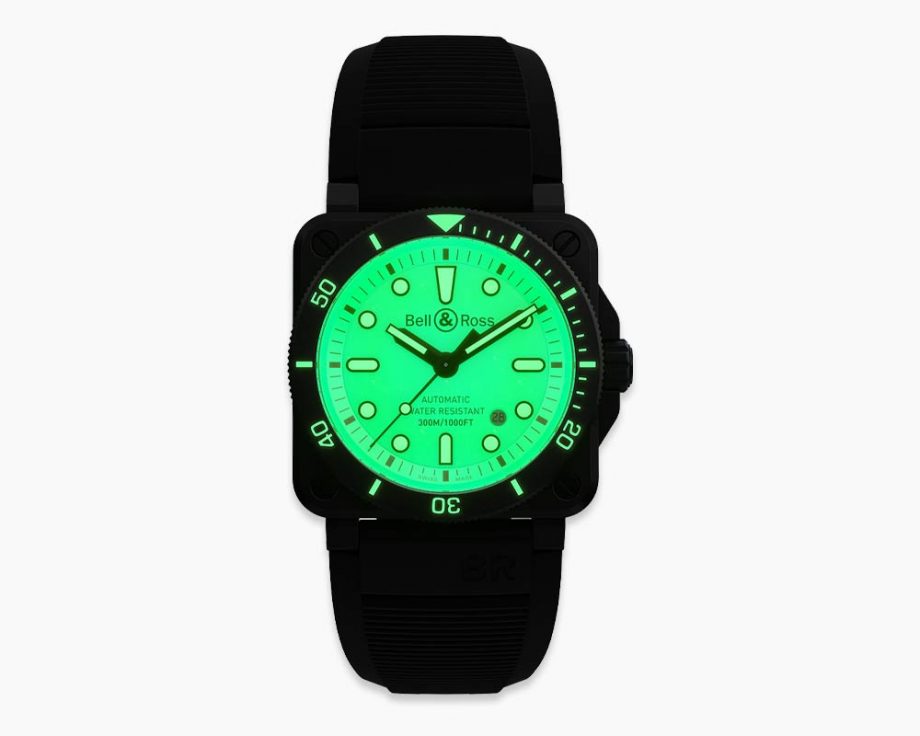 The BR 03-92 Diver Full Lum is an example of what Bell & Ross can achieve when they take their signature aesthetic of a square case and circular dial (features traditionally reserved for pilots watches) and mash them together with diver watch credentials, such as 300-metres of water-resistance and a luminescent dial that is oh so cool.

Instead of simply applying Super-LumiNova to the hands to make them legible at great depths, Bell & Ross has also given the dial a coating. Here, the dial receives a Superluminova C5 treatment while the hands get Super-LumiNova C3 (the different designations relate to the hue and brightness level) to not only allow the watch to essentially glow during the day, but to make it seriously shine at night and underwater at 25cm distance.

It’s a fresh take on what it means for a watch to be legible when the light disappears, and paired with the black ceramic case and colour-matching textured rubber strap, makes for a tough, rugged and stealth-like timepiece. 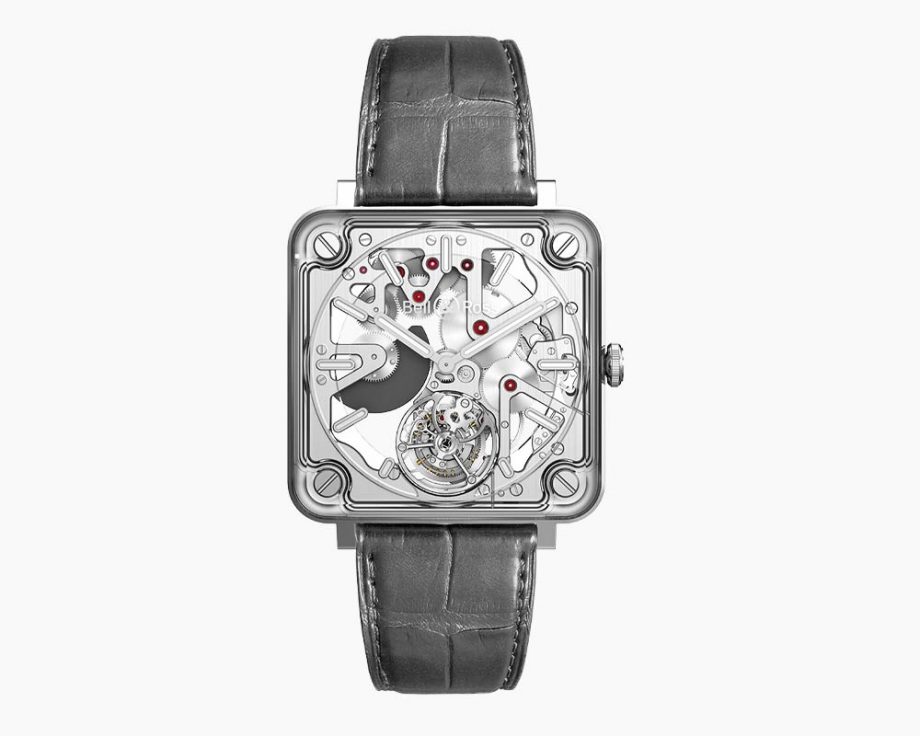 You remember when we said Bell & Ross was cemented within the affordable luxury watch sector? Well, this BR-X2 goes against that, with its $110,000 price tag. Unlike other watches the French watchmaker has churned out before, the BR-X2 Skeleton Tourbillon Micro-Rotor – an evolution of the non-skeletal model released in 2017 – attaches the movement to the 42.5mm case to make it seem like you’re just wearing a movement on your wrist. A solid departure from what we’re used to seeing from the brand, but one we have zero qualms with.

We’re also particular fans of the Bell & Ross’ ampersand signature motif being applied to the tourbillon, especially when you remember this watch is part of the company’s experimental range of watches, meaning rules and conventional design tactics need not apply. 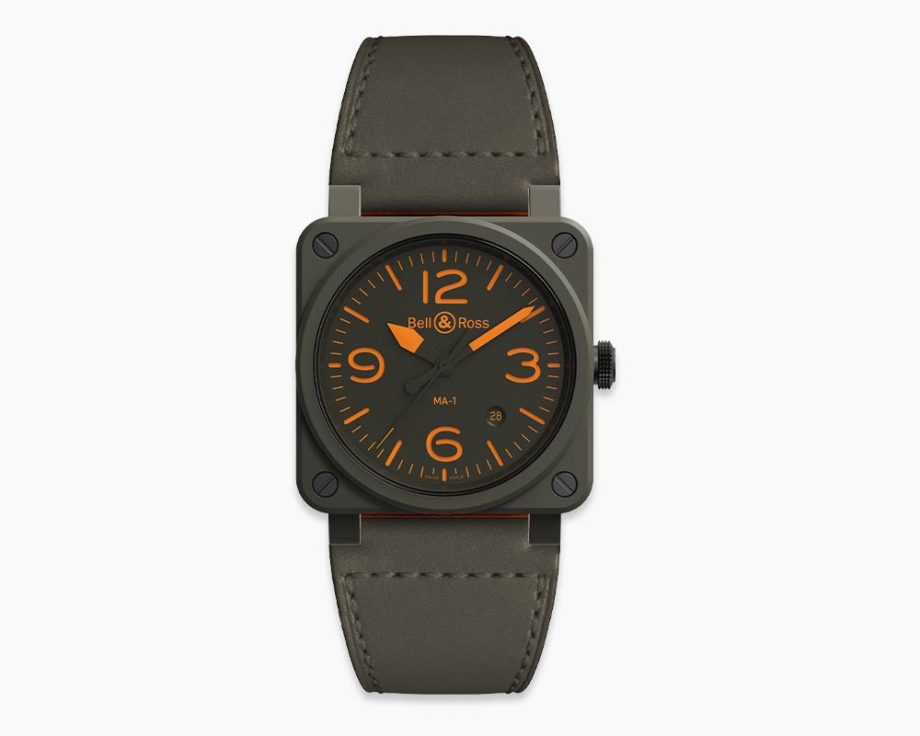 Bell & Ross delved deeper into aviation territory for inspiration for this BR 03-92 piece: the MA-1 flight jacket. If you don’t immediately what that is, if we said to you, khaki green bomber jacket with a bright orange lining, you’ll likely have a better idea. Those same colours are applied to this pilots watch in an incredibly effective way, resulting in a watch that is entirely fashionable, yet still remains true to pilots watch criteria.

It’s highly legible during both day and night, with the large orange numerals shining bright when the sun goes down and, just like the jacket upon which it is based, the khaki green strap is reversible to reveal an orange underside. 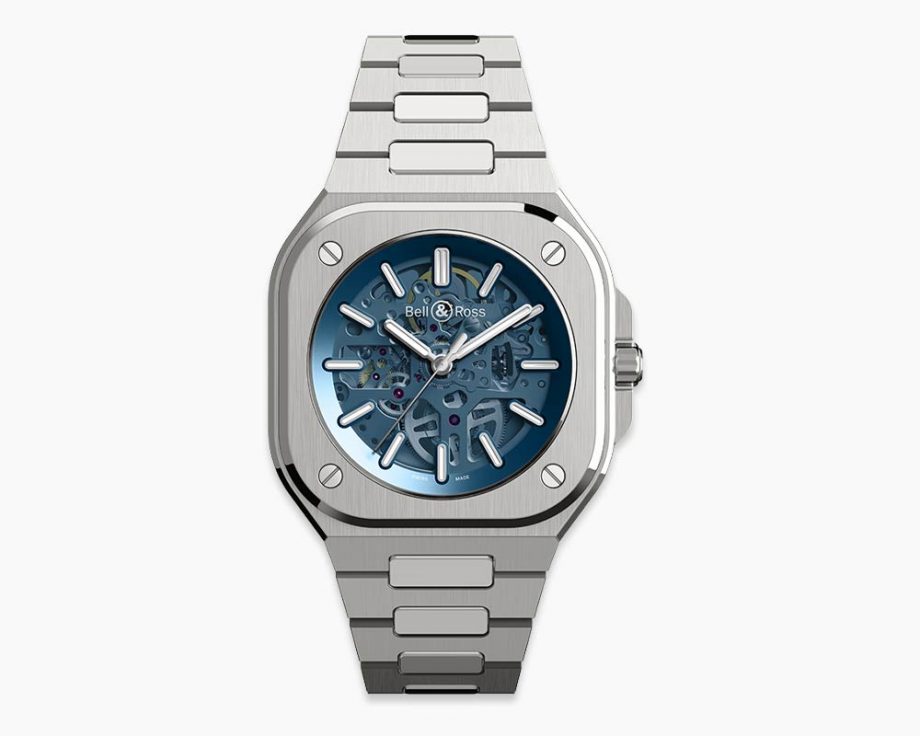 We regularly question whether you can get cooler than blue-dialled watches. Perhaps green is in with a fighting chance, but as a departure from the sea of black and white dials, blue can comfortably be considered a cool colour of choice. With this BR 05 (the non-chronograph version), Bell & Ross has done something rather remarkable by integrating a blue tinted sapphire glass together with a skeleton dial.

Traditionally, skeleton dials are quite hard to read (something even the BR X2 above doesn’t quite manage to avoid) but on this BR 05, the sapphire glass tinting give the metallic hands and indexes just enough of a background to make them easily readable day or night. 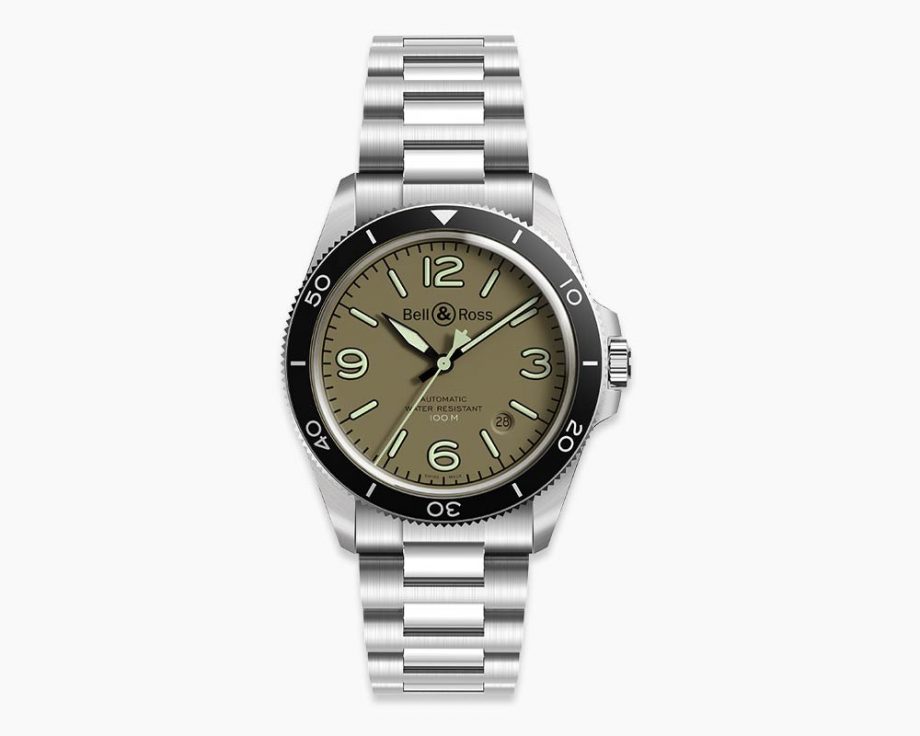 As we mentioned earlier with regards to blue-dialled watches, the other colour that can clout it on the cool scale is green. So when we saw the BR V2-92 Military Green, we were rather taken aback by the gorgeous design. It’s a sports watch through and through, with its green colouring evoking images of soldiers, uniforms, trenches, tanks and all other aspects related to the military.

In true Bell & Ross style, the company has put an emphasis on legibility, with the large Arabic numerals, indexes and hands all being given a Super-LumiNova C3 treatment. The only thing you might have occasional difficulty viewing is the small date window between 4 and 5 o’clock. 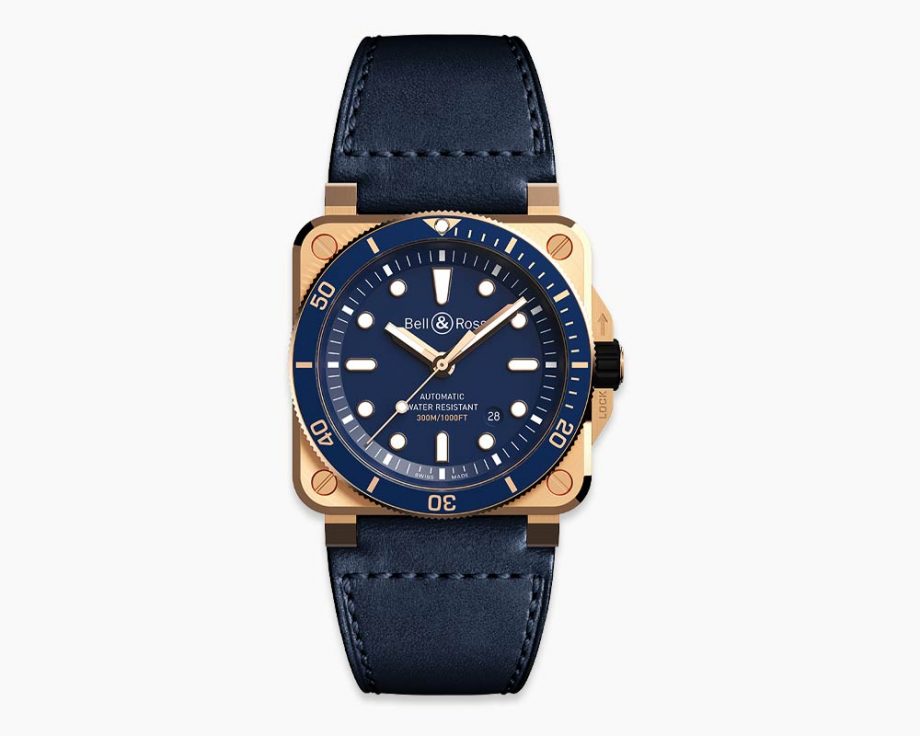 Another entry for the BR 03-92 collection here and the Diver Blue Bronze. This family of Bell & Ross watches is neatly divided between aviation and diving-inspired pieces, and if you forget about the company’s Hydromax, you’d be forgiven for wondering what the hell it’s doing producing dive watches.

Bell & Ross is just accomplished in the ocean as it is in the sky, however, and this bronze and blue beauty should appeal to diving watch enthusiasts not just for its 300-metre water-resistance, but for its aesthetic direction too. Bronze is a colour well-associated with diving, with the material being used to make diving helmets of yesteryear and to adorn portholes and to be fashioned into wheels for steering ships.