In the digital age we live in, striking up a conversation with the cute checkout girl has been replaced with swipes, matches, an exchange of LOLs and suggestive GIF’s hopefully leading to a date, and for some, a long-lasting relationship.

Dating apps have become such a phenomenon of our modern lives that last year 59% of people said that online dating was a good way to meet people. Sounds pretty promising, right? Well, only if you know you’re way around the deep waters of online dating like a pro. There are currently thousands, yes thousands, of dating apps to choose from.

With choices like ‘Thrinder’ for adventurous singles seeking threesomes, ‘Christian Mingle’ and ‘JSwipe’ for dating hopefuls with a religious inclination, ‘Bristlr’ for bearded men, the self-explanatory ‘Farmers Only’, ‘Gluten-Free Singles’ for bread-haters and even the notorious ‘Seeking Arrangement’ for sugar daddy hook-ups, where does one even begin to sort the good dating apps from the bad?

Well, we’ve done the hard work for you with a run-down of what we believe to be the 10 best dating apps, and how they’ll score you a date. Stop your aimless swiping, scrolling and stalking and check out the list below. 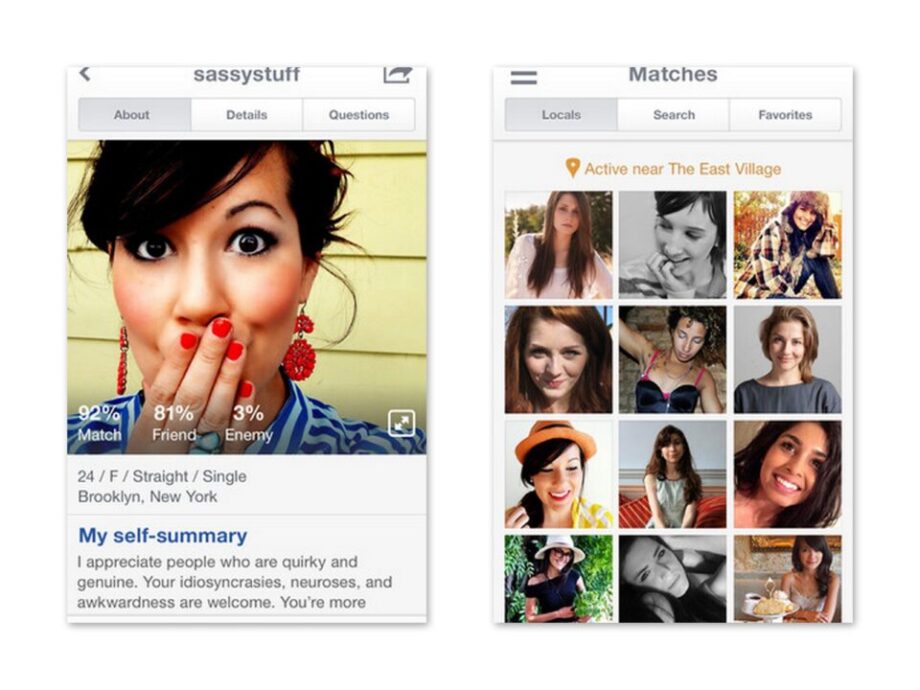 OKCupid is rather straightforward and features a massive pool of users, about 30 million to be exact. The app is also constantly looking to improve itself, adding features like ‘Flavours’, a function that allows users to quickly view different genres of potential matches e.g. ‘Kinky Nerds’, ‘Beard Lovers’, ‘World Travelers’ etc so you can weed out the definite no’s.

OKCupid also features personality quizzes, Instagram integration and a premium subscription service that can give you the ability to see users who have liked you.

Perfect For: Adventurous dating hopefuls with specific tastes and perhaps a few skeletons in the closet. 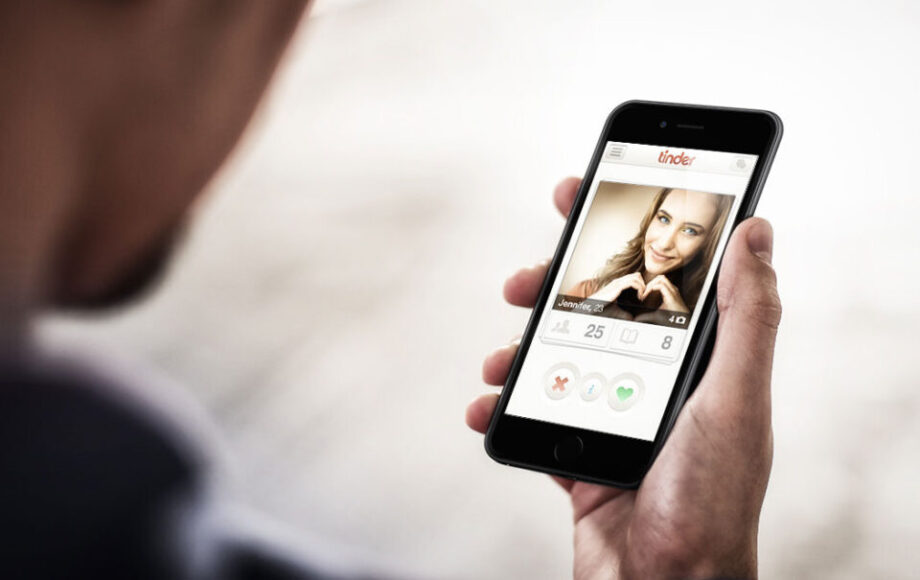 It’s an oldie, but a goldie, and perhaps the most well-known dating app that is out there. Inspired by gay dating app Grindr, Tinder encourages you to make yes or no decisions based on first impression profile pictures, swiping right if you approve and left if you don’t. Both parties swipe right? You’ve got yourself a match, sir. Tinder has most recently added GIF messaging, and the ability to ‘like’ chat messages.

“Cut the clutter. Cut the creeps” is Hinge’s motto, a dating app that tries to take the awkwardness out of meeting randoms by only connecting mutual Facebook friends. To use Hinge you log in via your Facebook account and every day at noon you’ll be served up a fresh batch of matches. Only showing its users 10 matches on average per day, Hinge is all about quality over quantity.

“The number one way to meet people still today, despite the growth of online dating, is through friends. Your friends say a lot about you – your history, your interests, your socioeconomic status,” Hinge CEO Justin McLeod told Digital Trends.

Perfect For: Nervous nancies who want to avoid being catfished or don’t want to stray too far from their group of friends. 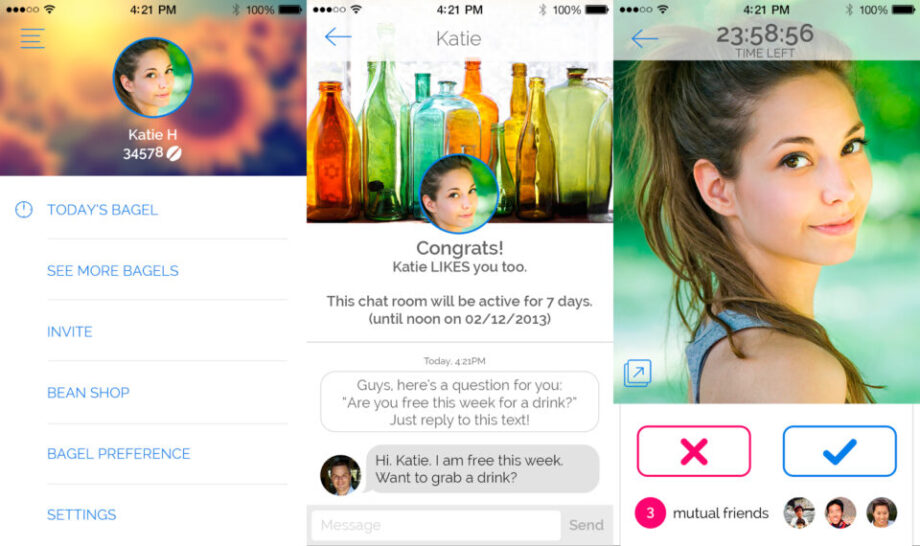 The adorably-named Coffee Meets Bagel is a female-centric dating app that, according to Forbes, has helped to create more than 50,000 happy couples. Unlike apps like Tinder that give you endless swiping power, Coffee Meets Bagel awards each user with a small number of ‘bagels’ (matches) each day at noon. This means you won’t waste your precious time aimlessly swiping, and if you do get a match you have only 7 days to respond and set up a date. If you’re pretty active on Coffee Meets Bagel, you’ll be rewarded with ‘coffee beans’ which act as currency to buy more bagels.

Why is it so good? Apparently, it has the highest concentration of women. Yes, that’s right. Coffee Meets Bagel boasts a whopping 58.6% female users. In fact, Coffee Meets Bagel’s female to male ratio is so skewed that the app has created #LadiesChoice, a new iteration that encourages women to make the first move.

Perfect For: Young professionals frustrated by the shallow pool of ladies around them. 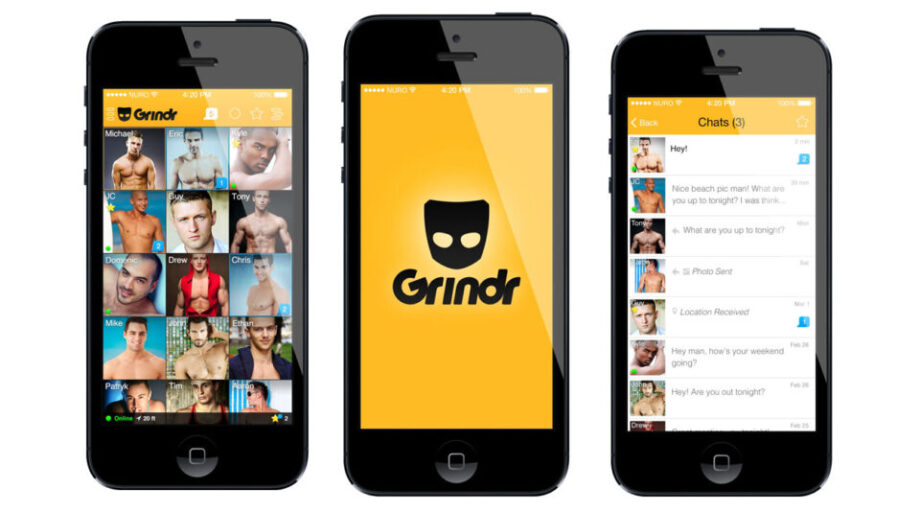 Boasting the title of the “world’s largest gay social network app”, Grindr has come leaps and bounds since it launched in 2009. In 2014, the app had achieved more than 10 million user downloads and had more than 5 million active monthly users in 192 countries. “Grindr shows you, using GPS technology down to the nearest few feet, the men in your vicinity looking to meet other men. Probably not to exchange recipes. Thus, in 2009, human civilisation evolved to a point where one could immediately find the nearest gay, bi or greedy man looking for sex,” Grindr founder Joel Simkhai told The Independent. Pretty self-explanatory, then.

Grindr comes in both free and subscription-based versions (Grindr Xtra) and works by presenting a grid of men, arranged from nearest to farthest away. If you’re keen, tapping on a picture will display a brief profile for that user, as well as the option to chat, send pictures, the share one’s location. There are even ‘Tribes’ on Grindr like Bear, Twink and Jock to declare your own sexy type.

Perfect For: Gay, bi and curious guys who don’t want to beat around the bush. 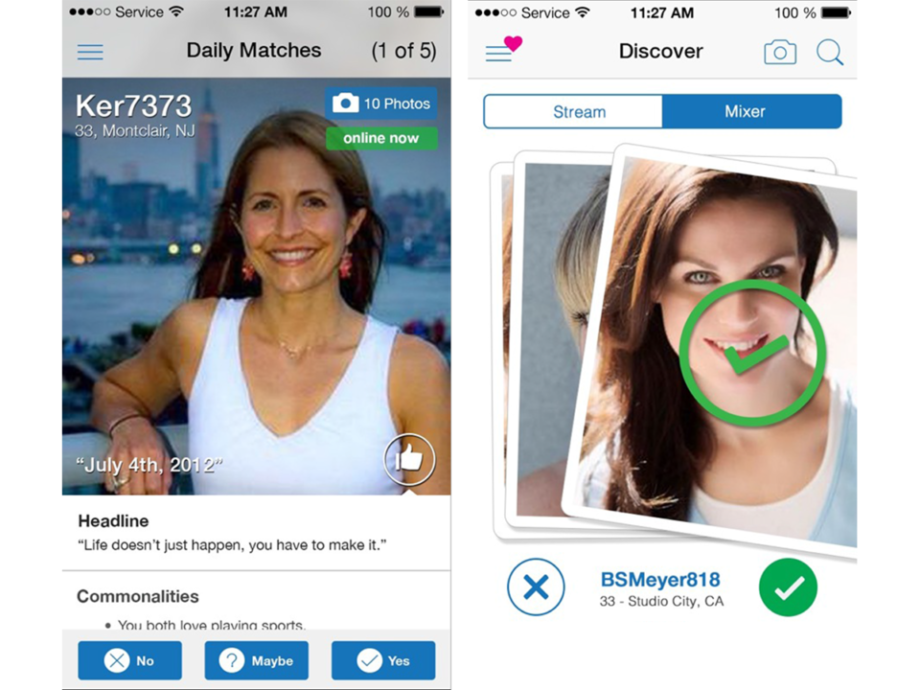 Launched in 1995, Match.com has arguably pioneered the Internet dating industry and is even the leading division of IAC, the umbrella corporation for apps like Tinder and OKCupid. Fitting then, that for slightly more mature dating hopefuls, Match.com is where it’s at.  Offering users a ‘freemium’ dating experience, Match works by setting up a profile and flirting with ‘winks’ to have prospective dates delivered daily.

If you’ve got a subscription, you can see who has checked out your profile and liked your pictures, plus, it works on Android Wear and Apple Watch if you’re online dating on the go. If you’re more serious about finding a relationship, or perhaps you’re on the hunt for a soulmate, Match.com is the dating app for you.

Perfect For: Older dating hopefuls looking for more than a hook-up. 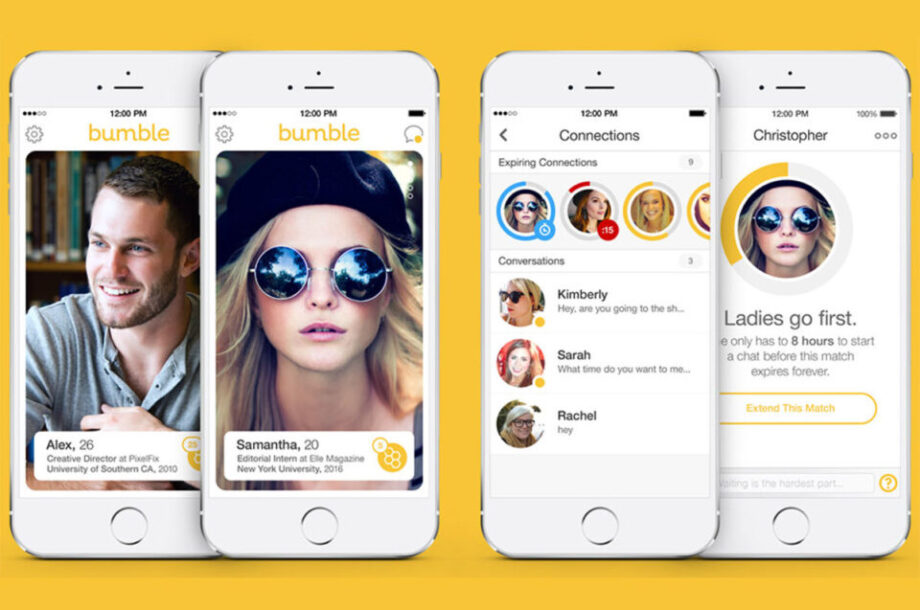 Sometimes described as the “feminist” dating app, Bumble aims to change the rules of the game and “reverse gender roles” so women have to make the first move. Bumble was started by Whitney Wolfe, who was ousted from Tinder. “I wanted to do something that would promote a responsible user online. There’s a lot of room to be negligent and nasty to each other,” Wolfe told Business Insider. “I figured, whatever I do next I want to narrow that down.”

Bumble works in the same way Tinder does, with profiles and swiping, but if you accidentally swipe left when you were meant to swipe right, you can shake your phone to undo it and while both men and women can swipe, only women can start the conversation. In fact, once you’ve met a match, female users only have 24 hours to start chatting before time’s up and the connection disappears forever.

Perfect For: Shy (or maybe lazy) guys who don’t like the pressure of initiating a conversation and like a confident woman. 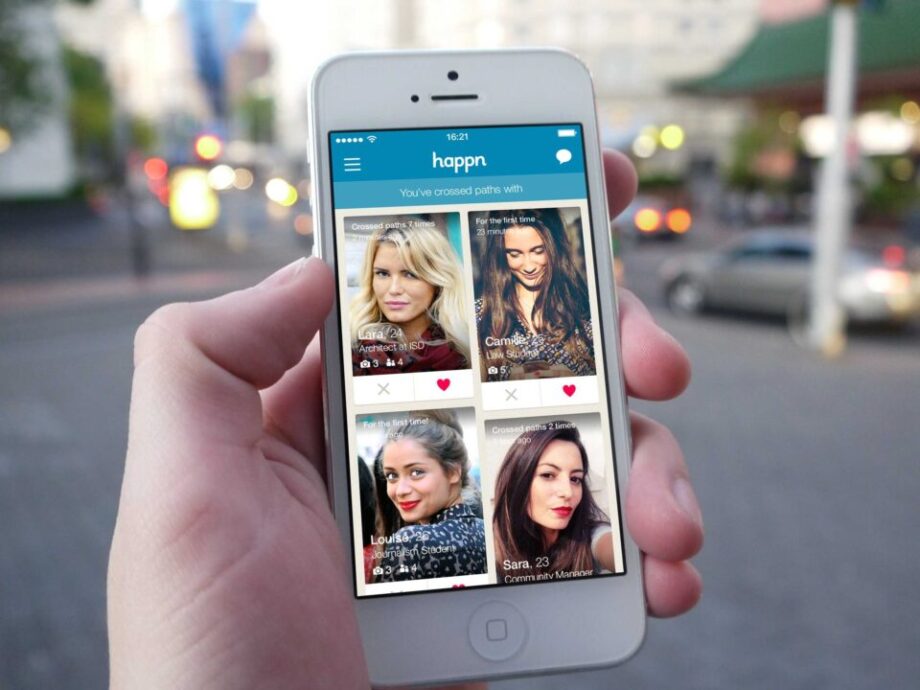 One of the more recent dating apps is Happn, an online dating service with the tagline “find the people you’ve crossed paths with,” which it does by helping you discover other singles within a 250 mile radius. Again, Happn works like Tinder with dating profiles hooked up via Facebook, but instead of swiping right or left, Happn uses GPS tracking to present you with a list of people near you. Then it tells you how many times you’ve crossed paths and a map of roughly where it happened. If the feeling is mutual and both parties hit the red love heart, you’ll have a ‘crush’ and can start messaging.

Perfect For: Guys who are looking for dates in highly populated cities, or desperate to court their cute barista. 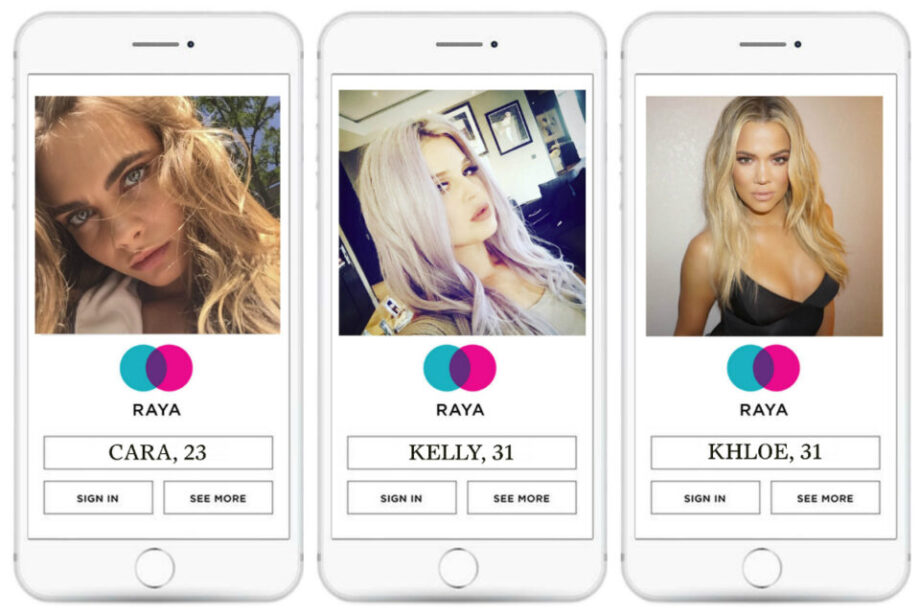 Describing itself as “an exclusive dating and networking platform for people in creative industries,” new app Raya is for the upper echelons of the online dating world. Members are admitted by a secretive, anonymous committee, and are evaluated by an algorithm, which considers “overall Instagram influence, who recommended the applicant, and how many active Raya members follow the applicant on Instagram”. No wonder Raya has also been referred to as the “Illuminati Tinder”.

One writer from NYMag claimed to have seen everyone from “pro skateboarders to Sports Illustrated swimsuit models, Dancing With The Stars professional dancers, a YouTube beauty guru, the designer of a streetwear brand popularised by Kanye West, a teen celebrity chef, and Moby.” Raya is all very hush-hush and with a minimal and slightly retro interface, it seems like the equivalent of that super hipster hole-in-the-wall nightclub you can never seem to get into.

Perfect For: Daters with high standards and a penchant for hipsters who want to avoid the cliche and keep their romances discreet and uber cool. 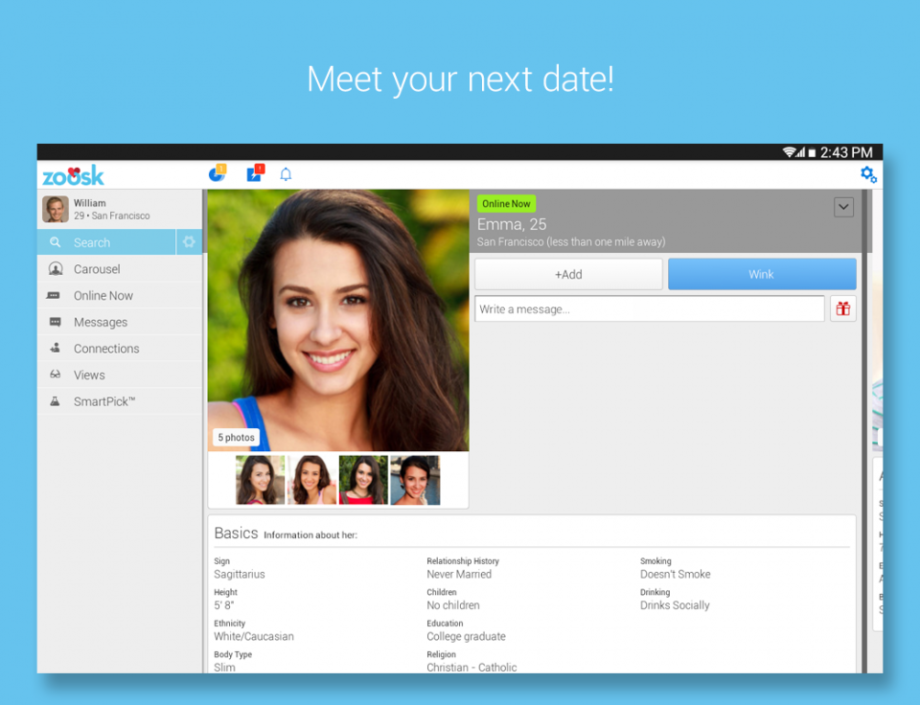 With tens of millions of users (or Zooskers) and available in more than 80 countries and 25 languages, Zoosk is a dating app with one of the largest membership bases. It’s sort of an all-rounder kind of app, as it doesn’t make users fill out their profiles unless they want to and uses a ‘Behavioural Matchmaking’ system that analyses a user’s pattern throughout the site to determine who they’d be most suited to romantically and/or sexually.

Offering this kind of flexibility means that Zoosk is what you make it, whether you’re looking for a one night stand or a long-term fling. After signing up, you’ll get a daily “mutual match” in your email that shows you someone else’s profile and allows you to click yes or no to being interested. But here’s the catch – if the feeling is mutual, you’ll get another email but you won’t know who your match is until you pay. A one month Zoosk membership will set you back $29.95 USD.

Perfect For: Guys who want something casual and don’t mind paying to play.