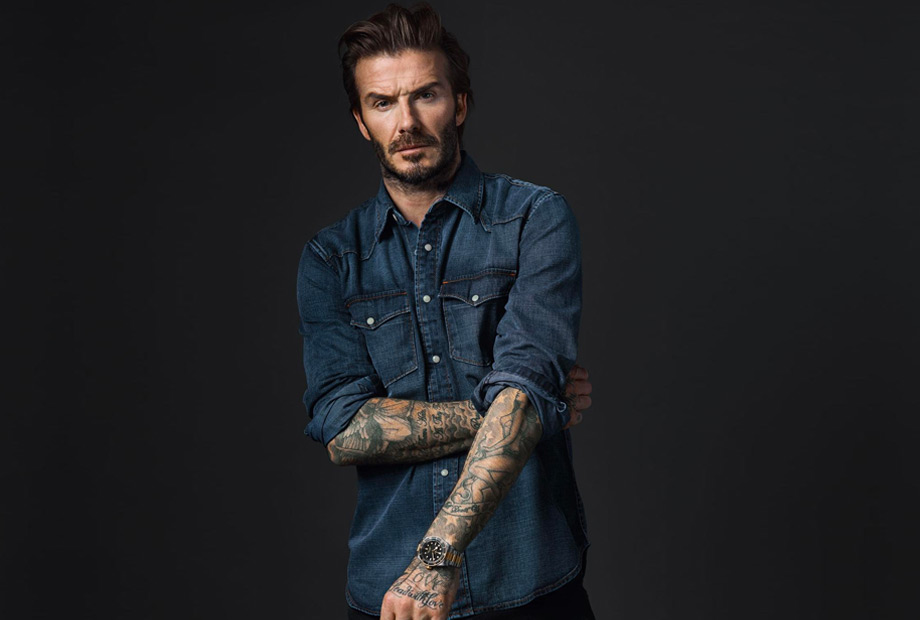 A quality denim shirt is a wardrobe staple for any man. The problem though is how to find one that’s suitable for both casual and smart casual dress occasions. We personally prefer blue washed denim shirts as they’re softer and are better paired with chinos and if you must, denim jeans.

Whilst acceptable, Double denim (Canadian tuxedo) is bloody hard to get right. If you must, try dark almost black jeans and a washed denim shirt on top and trial the contrasting tones from there. If your tops and bottoms match then you’ve taken it too far.

In this selection of denim shirts you’ll find them ranging from cheap to insanely expensive, so there should be something for everyone’s tastes. 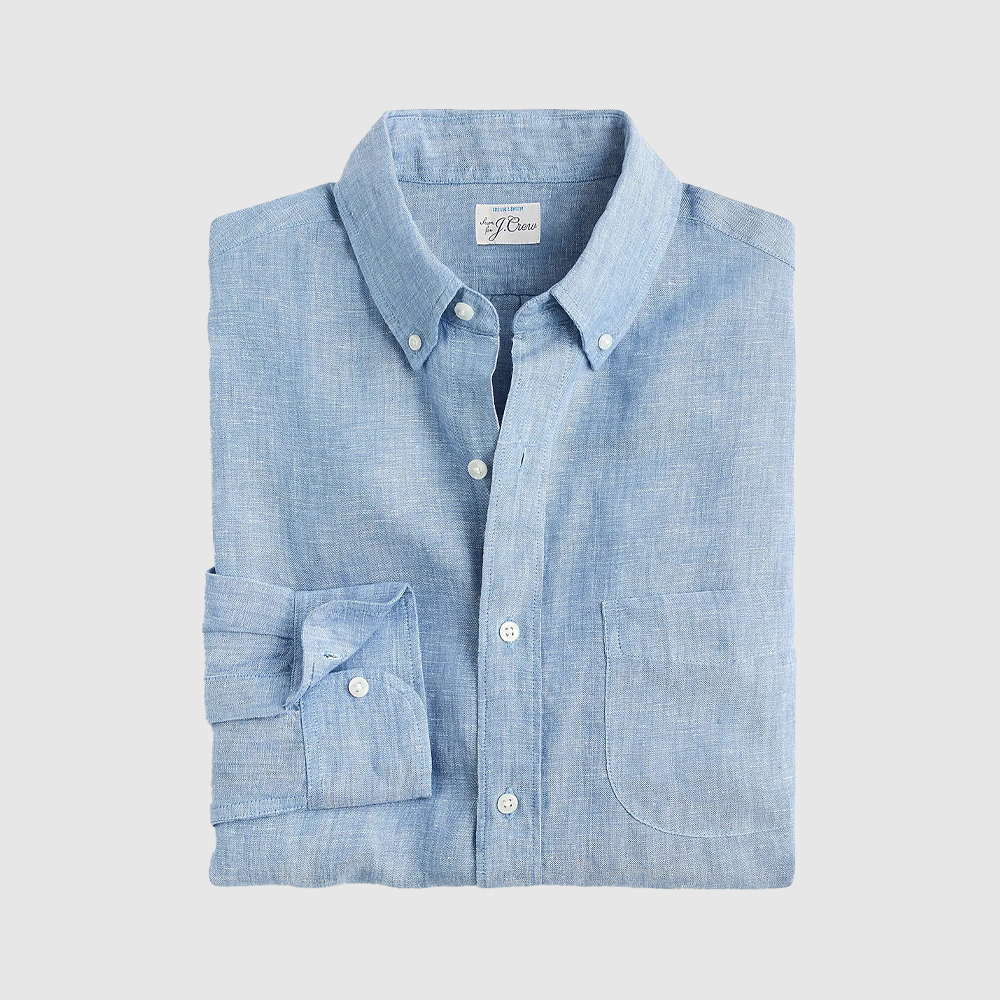 1 of 14
J. Crew
So often the clothier for Ivy League yuppies, J. Crew has built a reputation for well-styled and well-made menswear essentials. Its range of chinos and polo shirts may demand the spotlight, but its extensive range of casual and denim shirts is well worth a look too.

This chambray shirt looks like denim, but being made from chambray is actually much more lightweight. It's softer too, so will remain comfortable all day long, and owing to its versatile nature, can be worn from the office to the evening bar with ease.
Shop Now 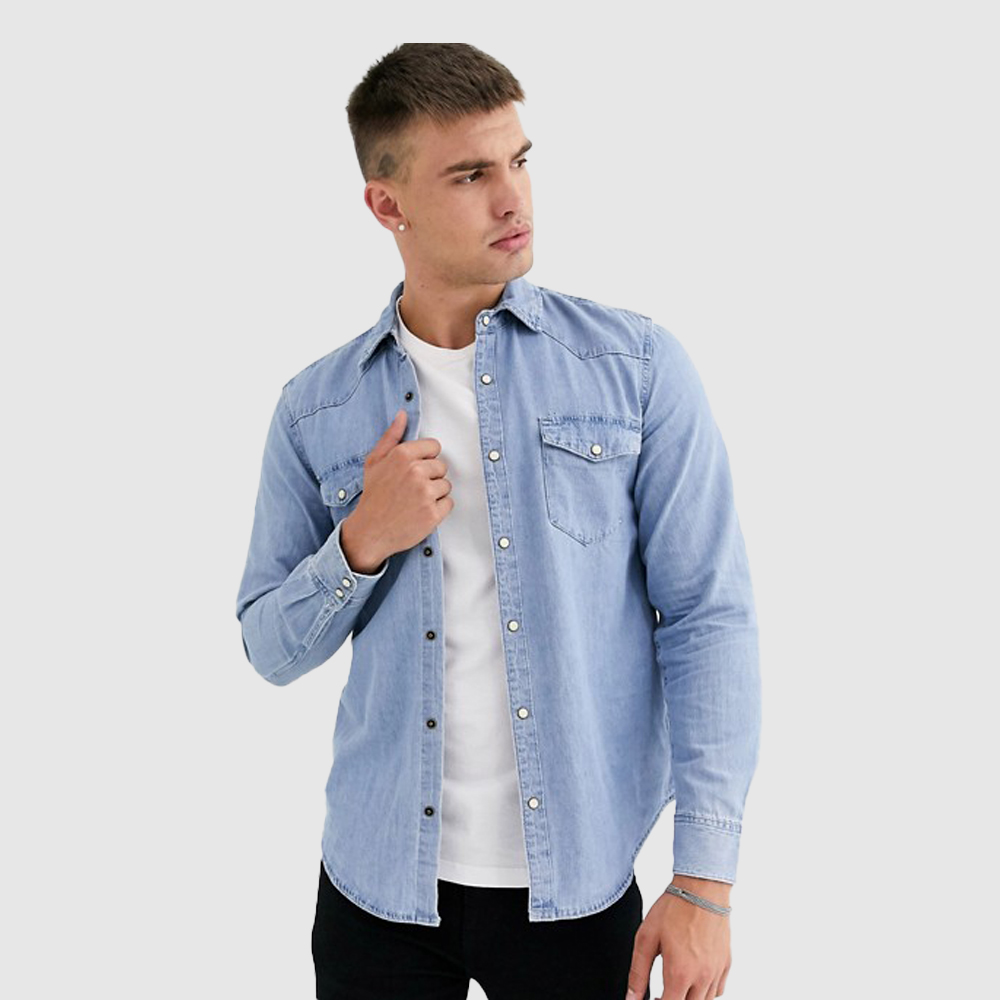 2 of 14
Pull&Bear
Pull&Bear is a Spanish clothing brand that has been outfitting guys since 1986, when it was known as New Year, the Pull&Bear name didn't arrive until 1991. The brand has a particularly urban style to its clothing and one that perhaps resonates more with a younger crowd.

This western denim shirt comes in a light blue wash, making it perfect for pairing with darker jeans. Stud poppers and chest pockets give it some wild-western flair, making it the perfect daytime wearer.
Shop Now 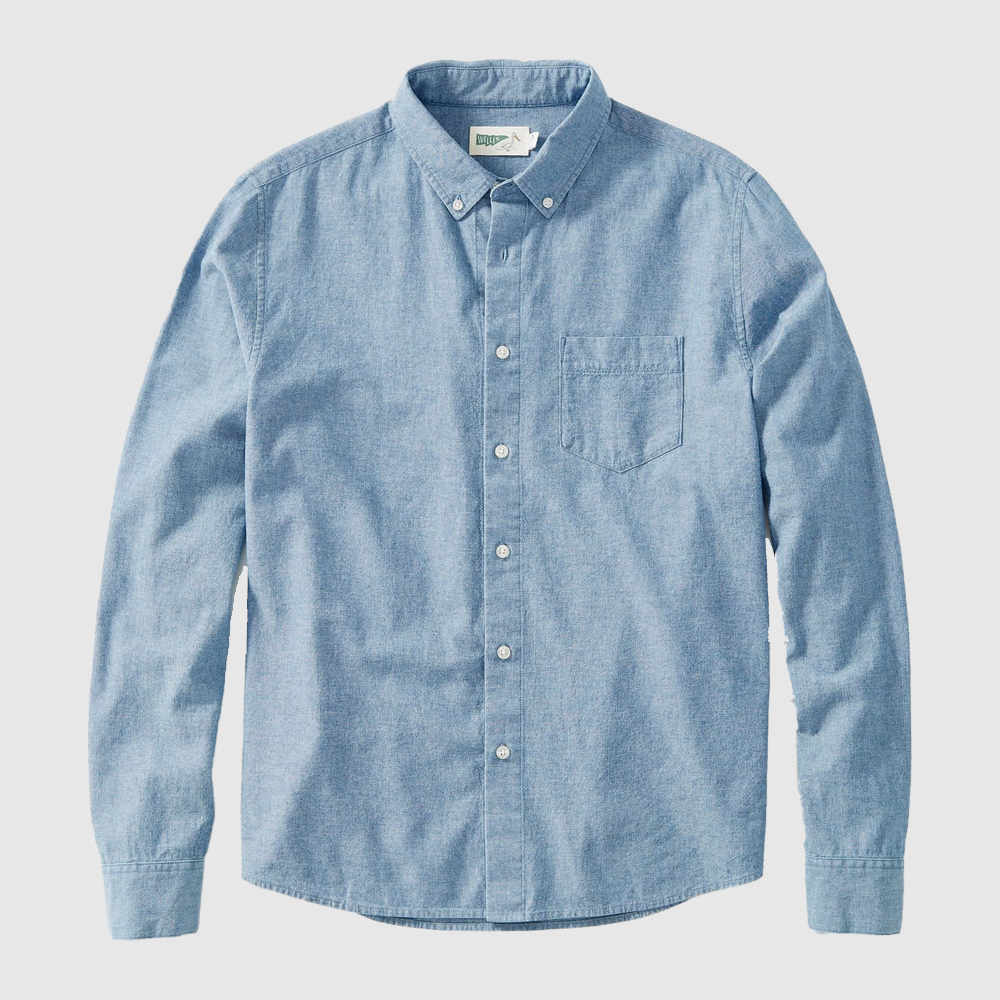 3 of 14
Wellen
Wellen is the quintessential brand for the laid-back dude. Born in Southern California, the brand puts its products through their paces by jetsetting around the world to such locations as Bali. Everything it makes is sustainably made in ethical factories.

This Organic Denim Shirt is as soft-as-you-like straight out the box thanks to its "special enzyme-washed process." Wellen adds that it's the perfect piece for keeping you warm during cool summer evenings and to act as a mid-layer to keep you warm in winter. A button-down collar keeps things professional and its mid-wash colouring makes pairing a doddle.
Shop Now 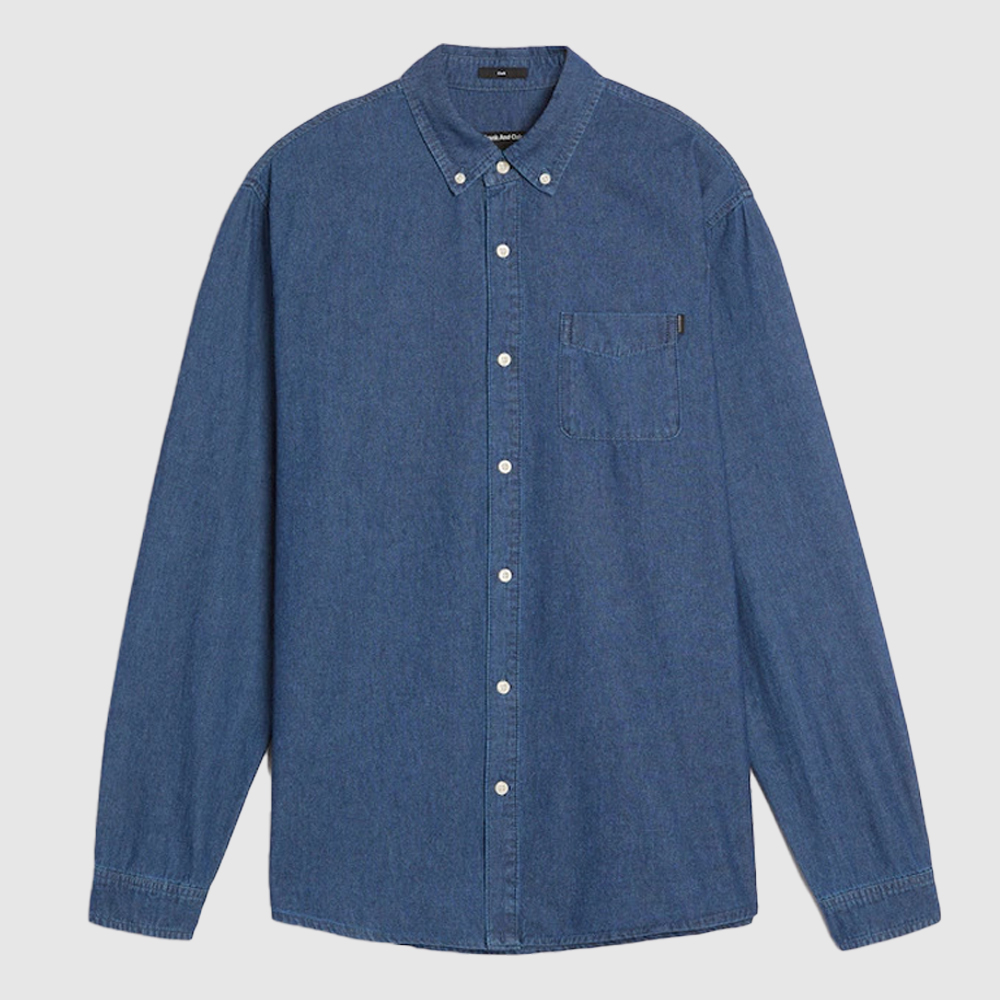 4 of 14
Frank & Oak
Founded in 2012 and charging on a mission to leave the planet in a better state than how they found it ever since, Frank & Oak make some of the finest menswear essentials around.

The Clark denim shirt comes in a regular cut, allowing it to be a perfect layering piece over a t-shirt, while its dark denim wash lends it to being worn day and night. Factor in 100% organic cotton and you've got yourself the perfect denim shirt.
Shop Now 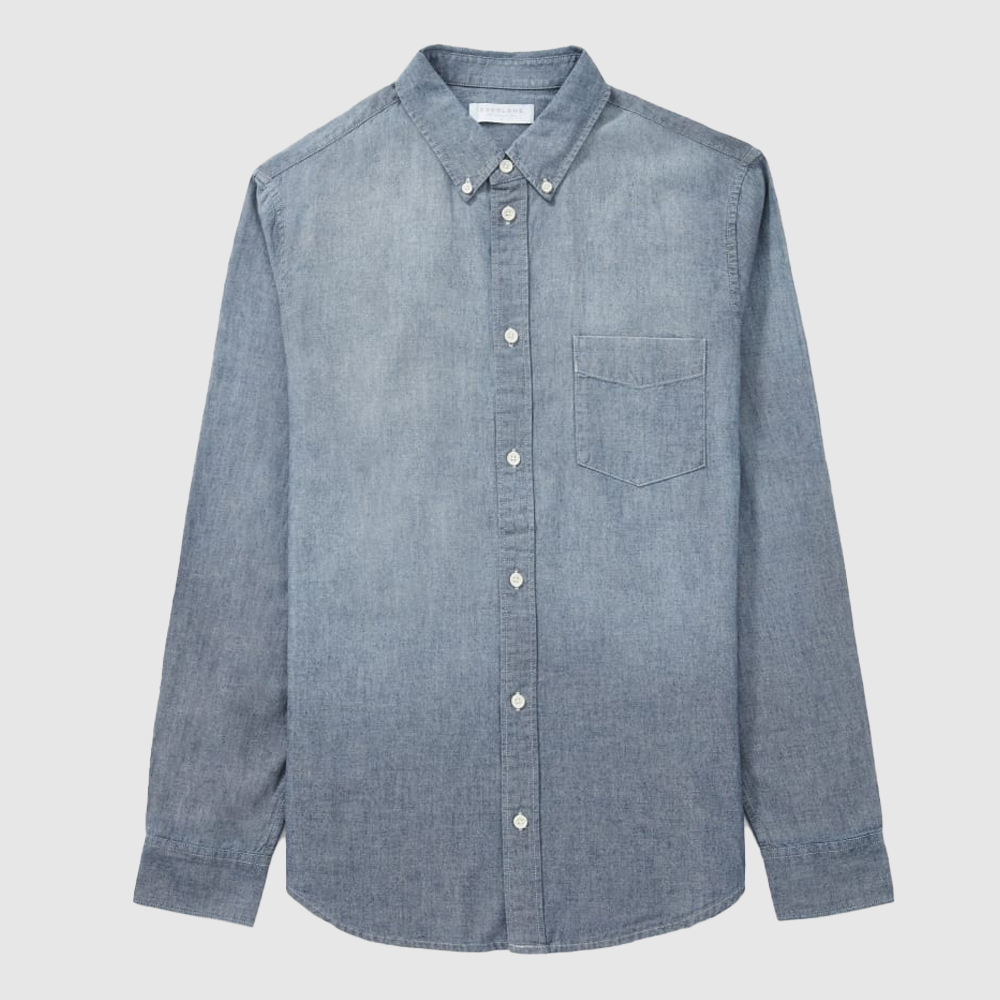 5 of 14
Everlane
Everlane is another direct-to-consumer retailer that puts a strong focus on sustainability and giving its workers a fair wage, as well as charging consumers incredibly competitive prices. Each piece on the Everlane site has its price broken down, so you know where you're money is going, and you can how it stacks up against the competition.

The Chambray shirt does what it says on the tin, it's a 100 per cent cotton chambray shirt, available in both light and dark washes, both of which have a slightly faded look. Not only does this mean they're well-suited to casual occasions, but they can add an indie vibe to evening outfits too.
Shop Now 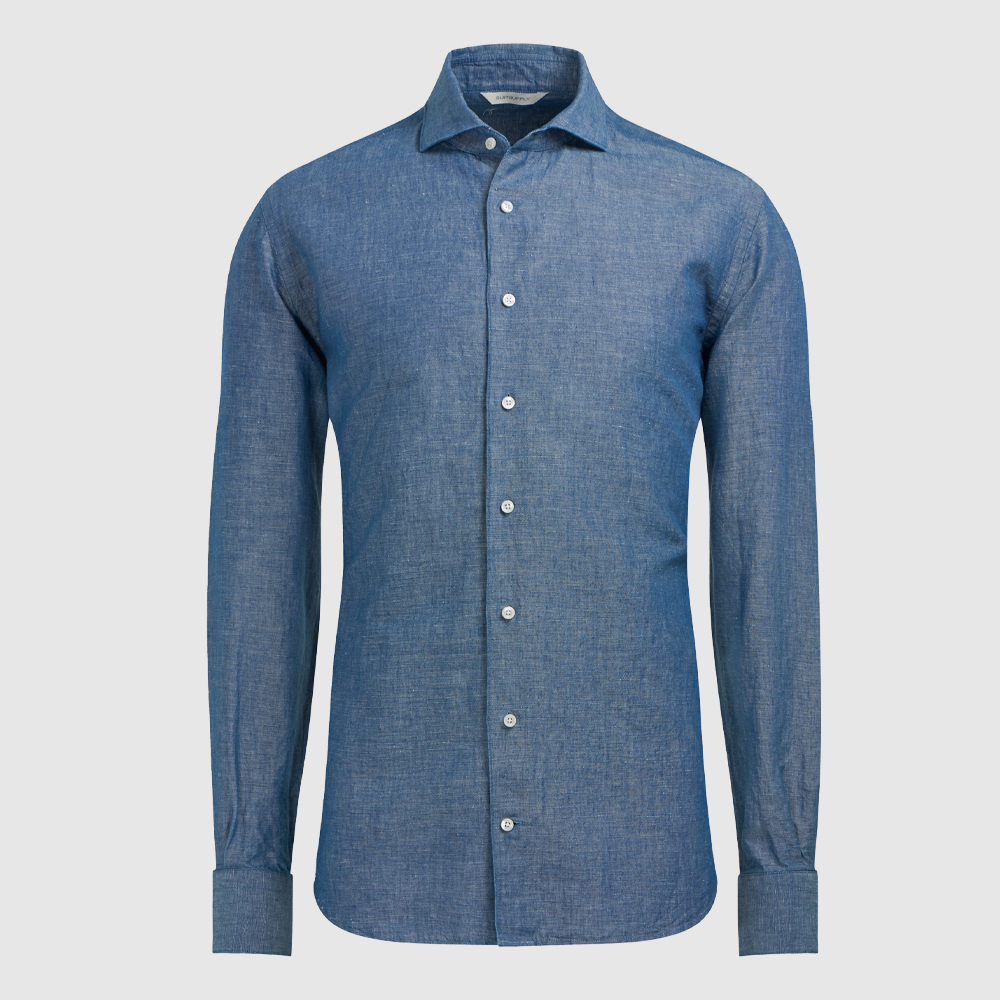 6 of 14
Suitsupply
Yep, Suitsupply isn't just a one-trick pony that specialises in suits, oh no. The Dutch company has a full range of other essentials too, and that includes denim shirts.

This Blue Denim Shirt is literally a blue denim shirt. Made from a breathable blend of cotton and linen sourced direct from Italy, it's been expertly tailored to provide a slim, but not quite figure-hugging fit.
Shop Now 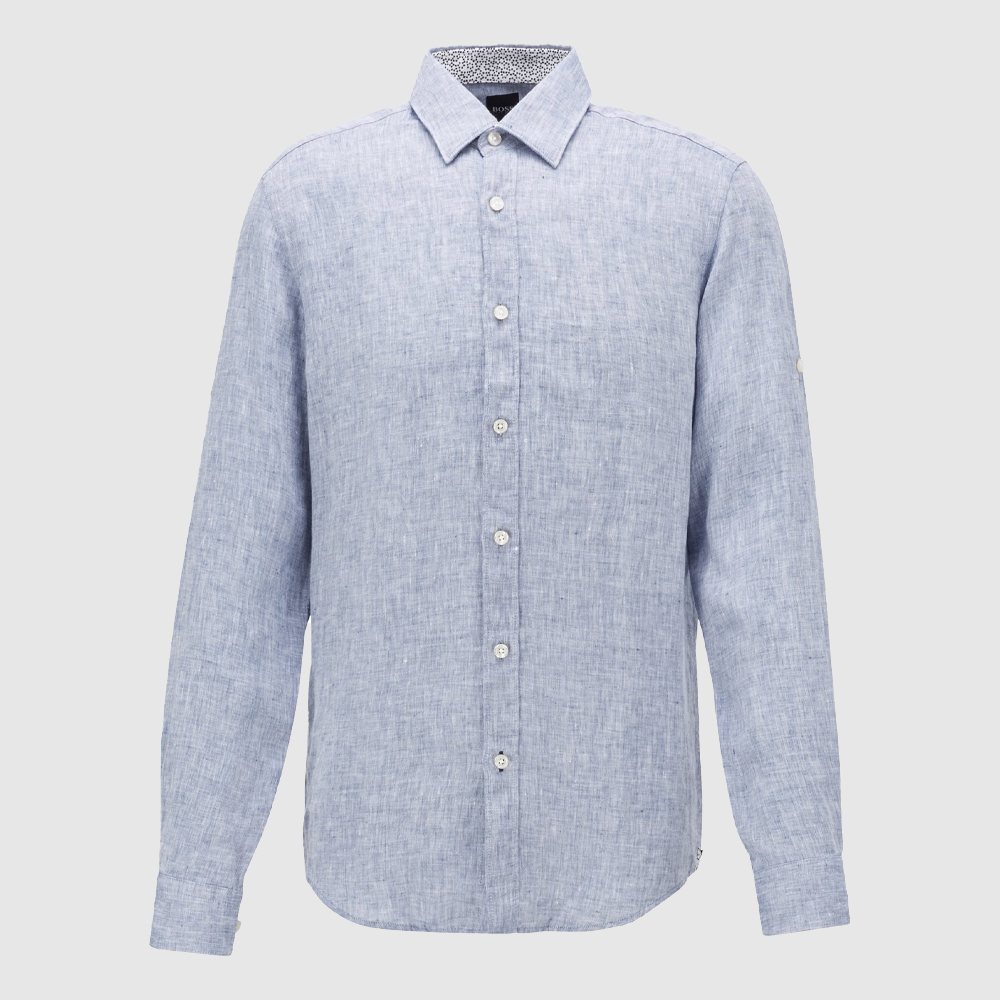 7 of 14
Hugo Boss
Hugo Boss may be best-known for its luxurious suits and polo shirts, but its BOSS Menswear arm is decidedly more casual, providing guys with designer-name clothing but for prices that won't break the bank.

This chambray linen shirt is perfect for warmer months thanks to its use of linen. A straight fit cut gives it some extra room compared to slim-fit designs and buttons on the sleeves allow to roll them up and pin them in place.
Shop Now 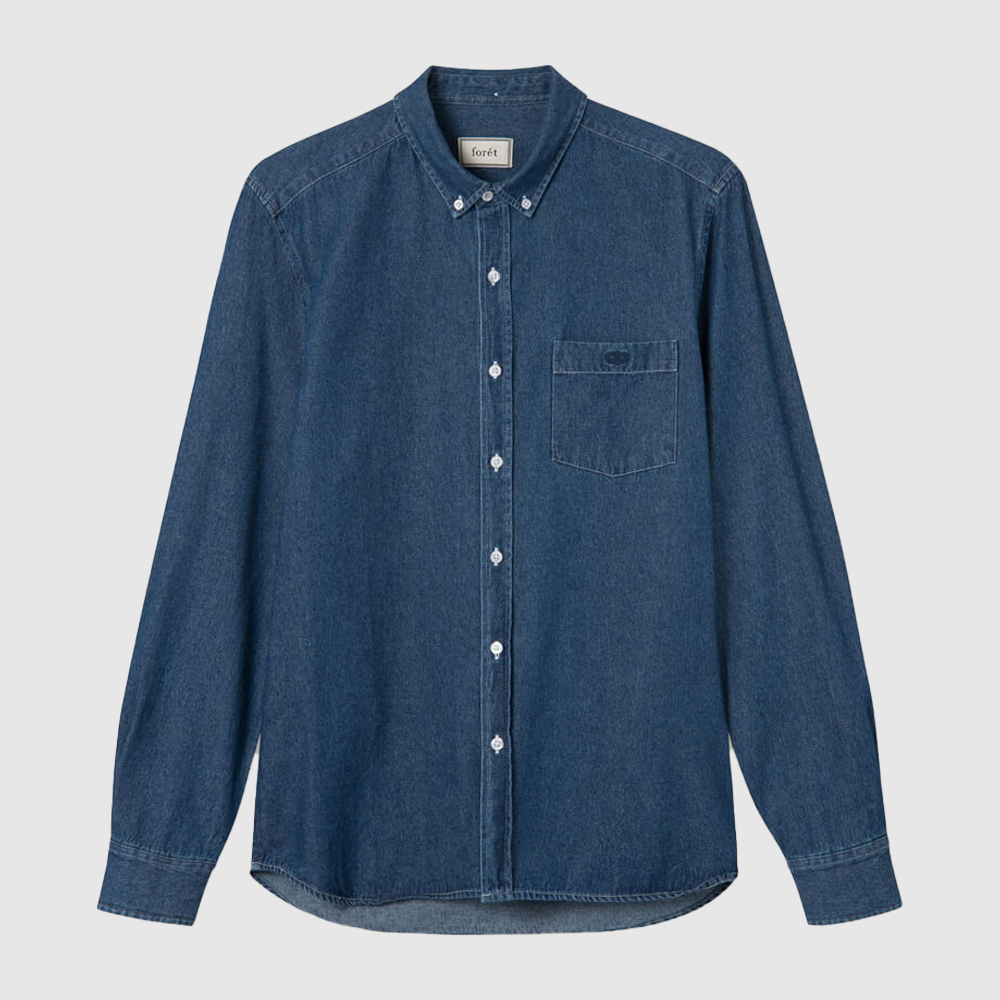 8 of 14
Forét
Danish brand Forét (French for forest) was founded by two friends in 2014 who have a strong passion for all things nature. The pair carefully design their pieces to be suitable for both urban and rural areas, with a "street style meets rugged edge" approach.

The Denim Walker Shirt is the embodiment of that, with a dark wash making it suitable for dressing up for a evening, but being cut in a regular fit, its boxy and casual enough to accompany you on an outdoor trek.
Shop Now 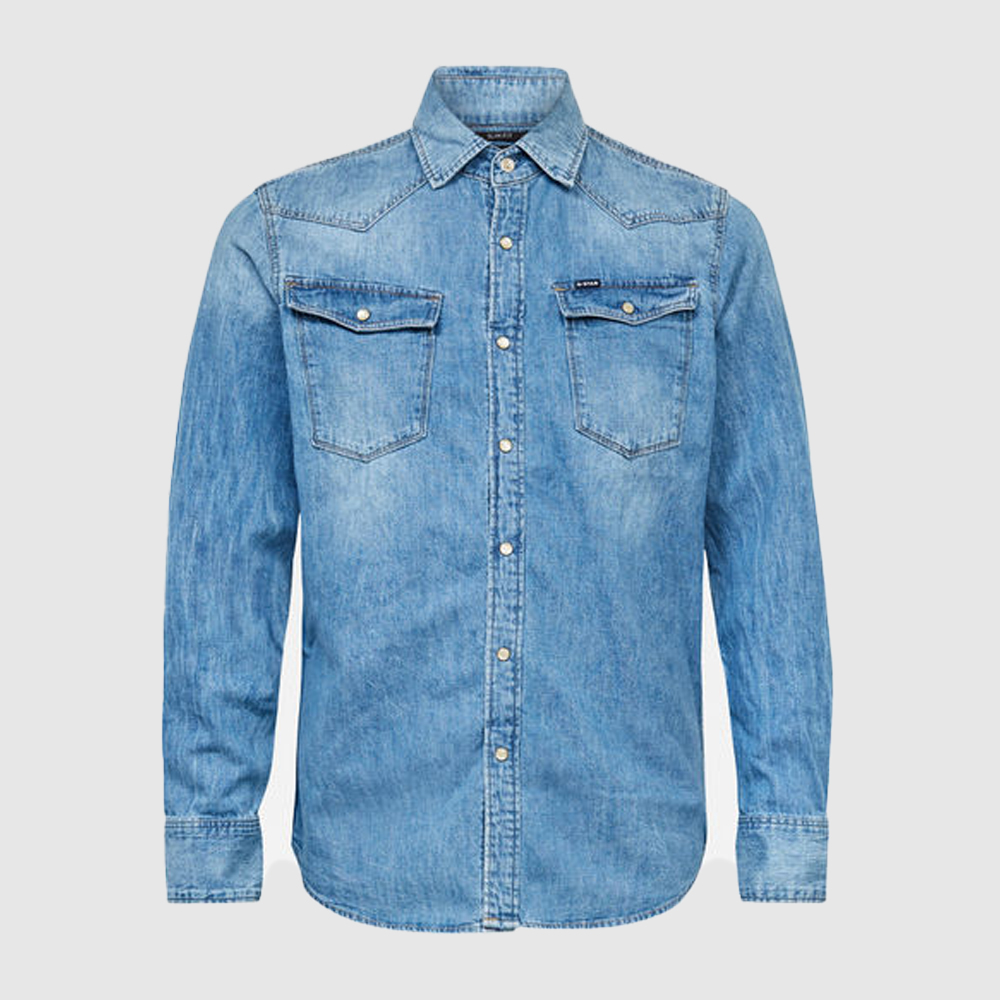 9 of 14
G-Star Raw
It's not a list of denim clothing if it doesn't feature G-Star Raw, right? The Dutch designer denim brand is literally know for its quality denim pieces and has amassed a strong following because of it. While it does cater for those who favour clothes made from other materials, it's the denim you're going to want.

Such as this 3301 Slim Shirt, which takes its design inspiration from shirts of the Wild West. The denim used is lightweight at 7.2oz, making it an ideal top layer in summer and even better mid-layer in winter. Flapped chest pockets add some stylish touches and snap fastenings make taking it off a breeze.
Shop Now 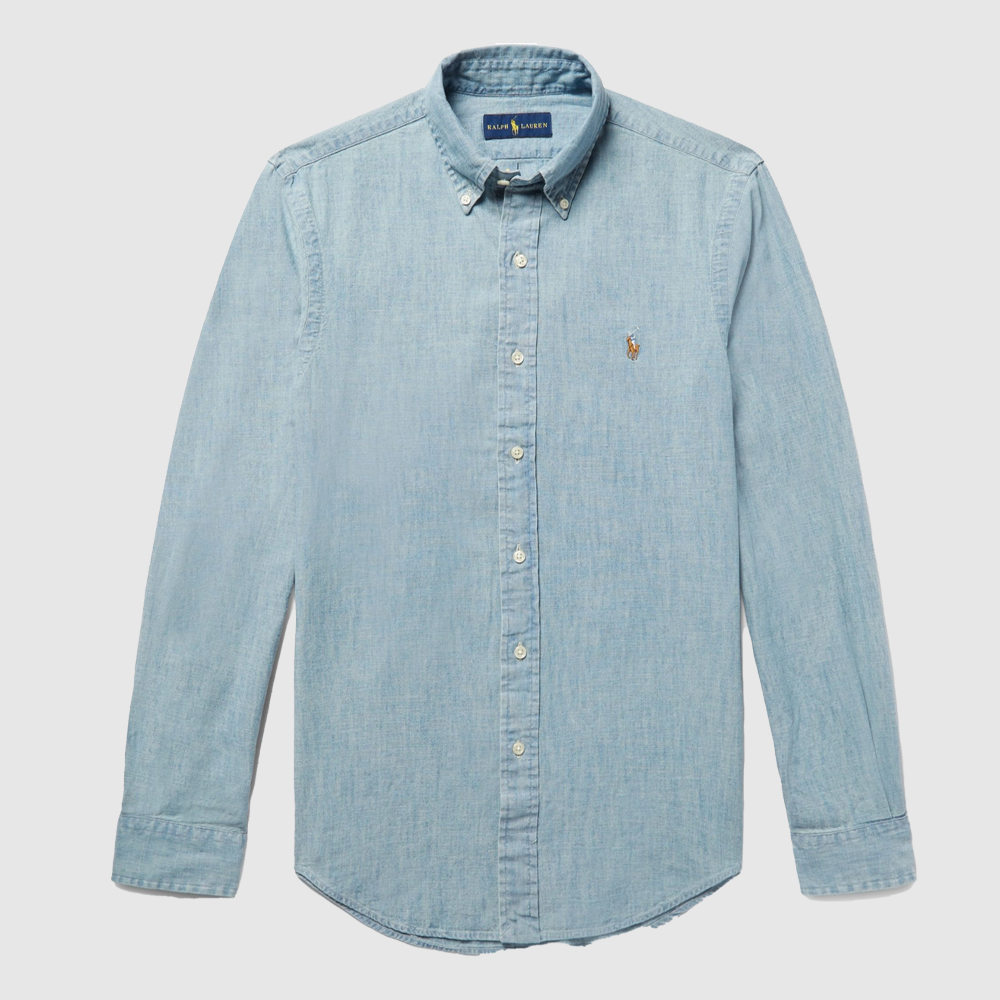 10 of 14
Ralph Lauren
With a long and illustrious history, Ralph Lauren is known for being one of the finest menswear designers out there. The polo player logo is renowned the world over, and many guys seek out RL clothing to wear the badge with pride. Shirts and polo shirts are two of the company's biggest draws, so it only makes sense it ventures into denim, too.

This particular Polo Ralph Lauren denim shirt is cut from washed-denim to give it the perfect mid-wash colouring. It also features button fastenings, a slim-fit cut and the iconic polo player on the chest, it's the only denim shirt you need.
Shop Now 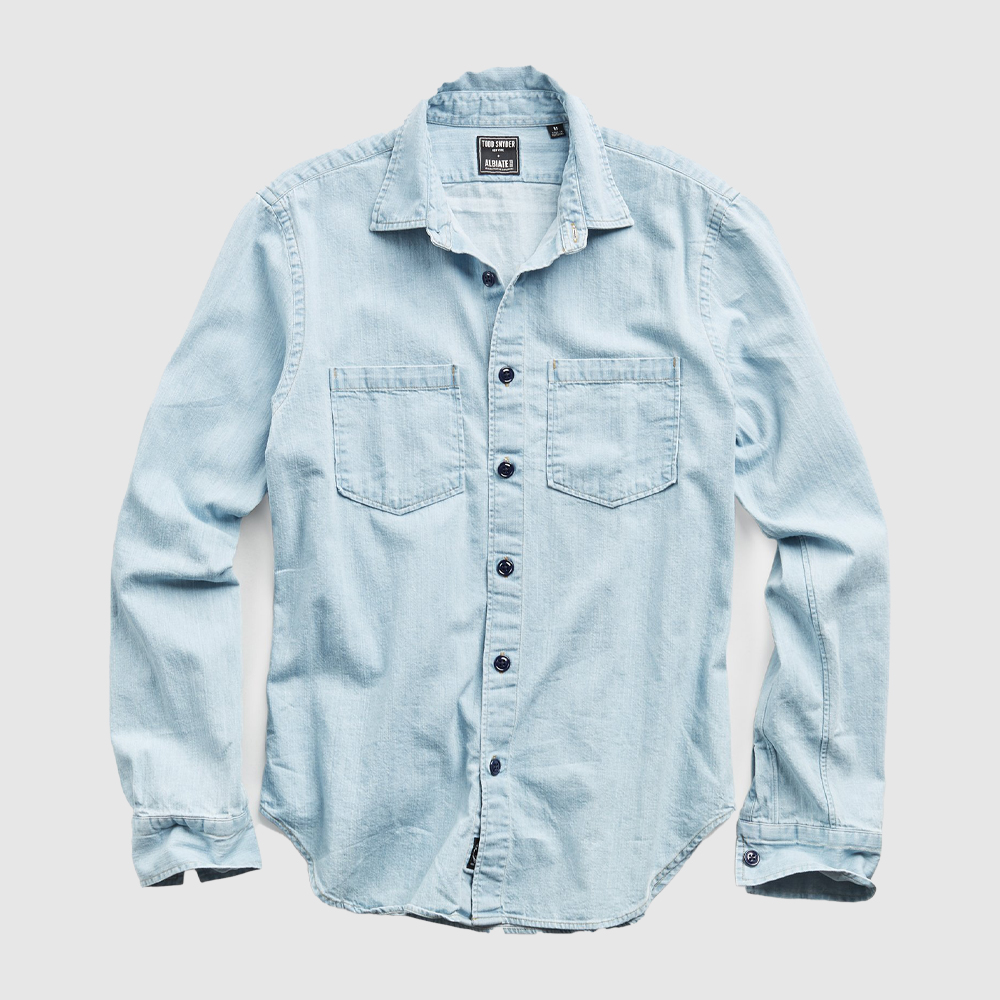 11 of 14
Todd Snyder
Todd Snyder segues perfectly from Ralph Lauren, as the designer with the eponymous label used to work for the silver fox. His own label proves he can go it alone too, with all the essentials you could ask for, but with a unique edge to them that deservedly gives Todd a place on this list.

This bleached denim shirt, finished in a very light indigo, will look perfect with dark or black denim jeans and a pair of fresh white sneakers. Made from 100 per cent Italian cotton and rocking classic workwear styling, Todd Snyder's denim shirt is as versatile as they come and will hold you in good stead no matter the occasion.
Shop Now 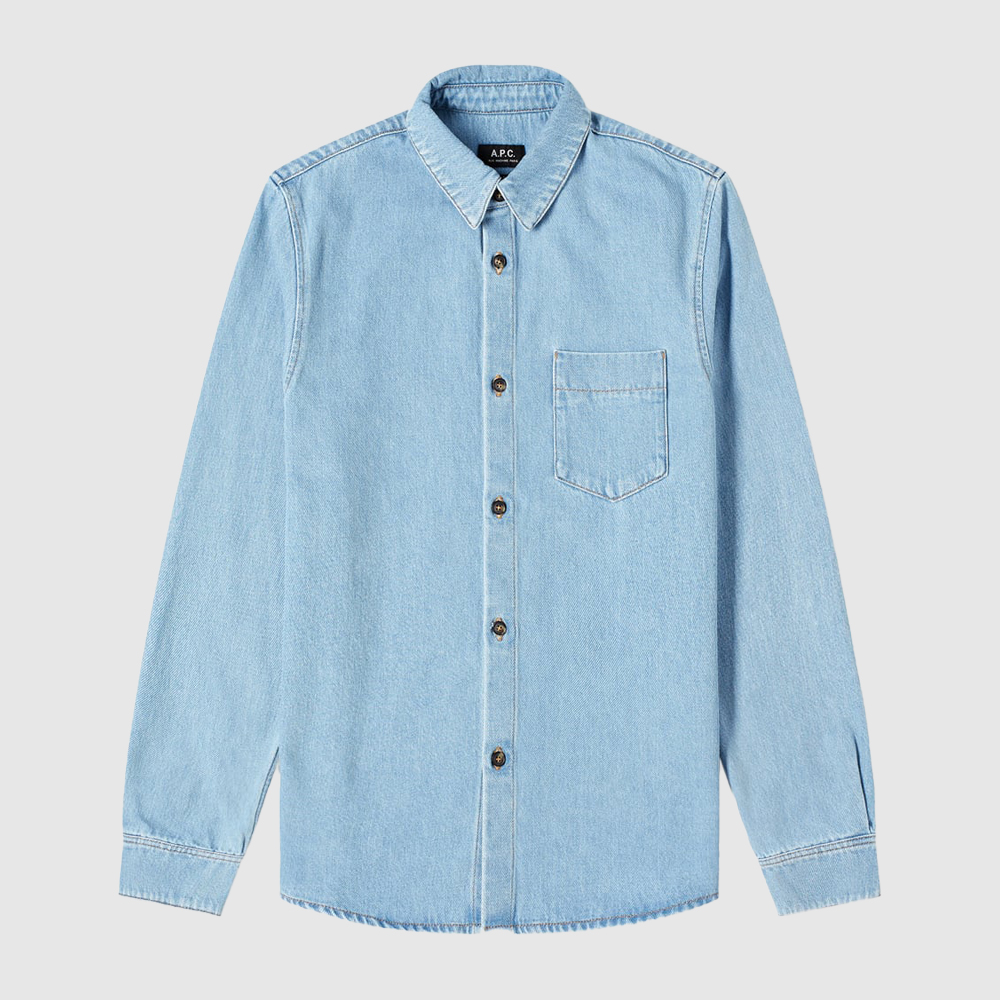 12 of 14
A.P.C.
French high-end fashion brand A.P.C. was founded in 1987, initially as a menswear only brand, but after attracting female attention in its first year, began catering for women too. The brand is a huge fan of minimalist designs, and rarely displays its logo.

That's certainly true of the Victor denim overshirt, which as its product name implies, is a heavyweight shirt that can act as a top layer even when the temperature begins to drop. A classic stonewashed colouring makes it easy to pair with dark or even beige or stone-coloured bottoms, and tortoise shell buttons provide a subtle but effective stylistic touch.
Shop Now 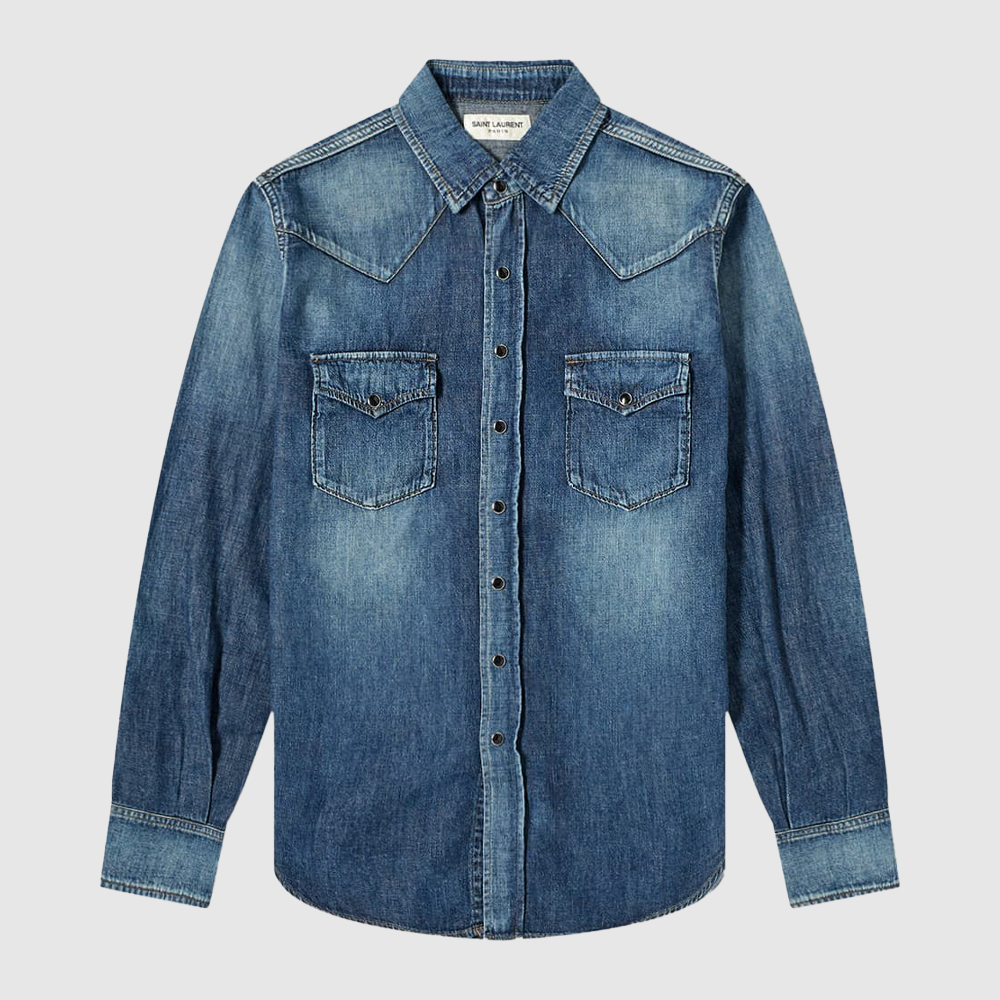 13 of 14
Saint Laurent
If truly luxurious designer labels are the only ones you touch, then Saint Laurent is more than happy to deliver. The French fashion label has been at the forefront of fashion ever since it was founded, and it continues to produce pieces that are oh sO lustworthy.

This classic western-style denim shirt is a perfect reimagining of the shirts worn yesteryear, complete with black stud fastenings, flapped chest pockets and faded patches in all the right places.
Shop Now 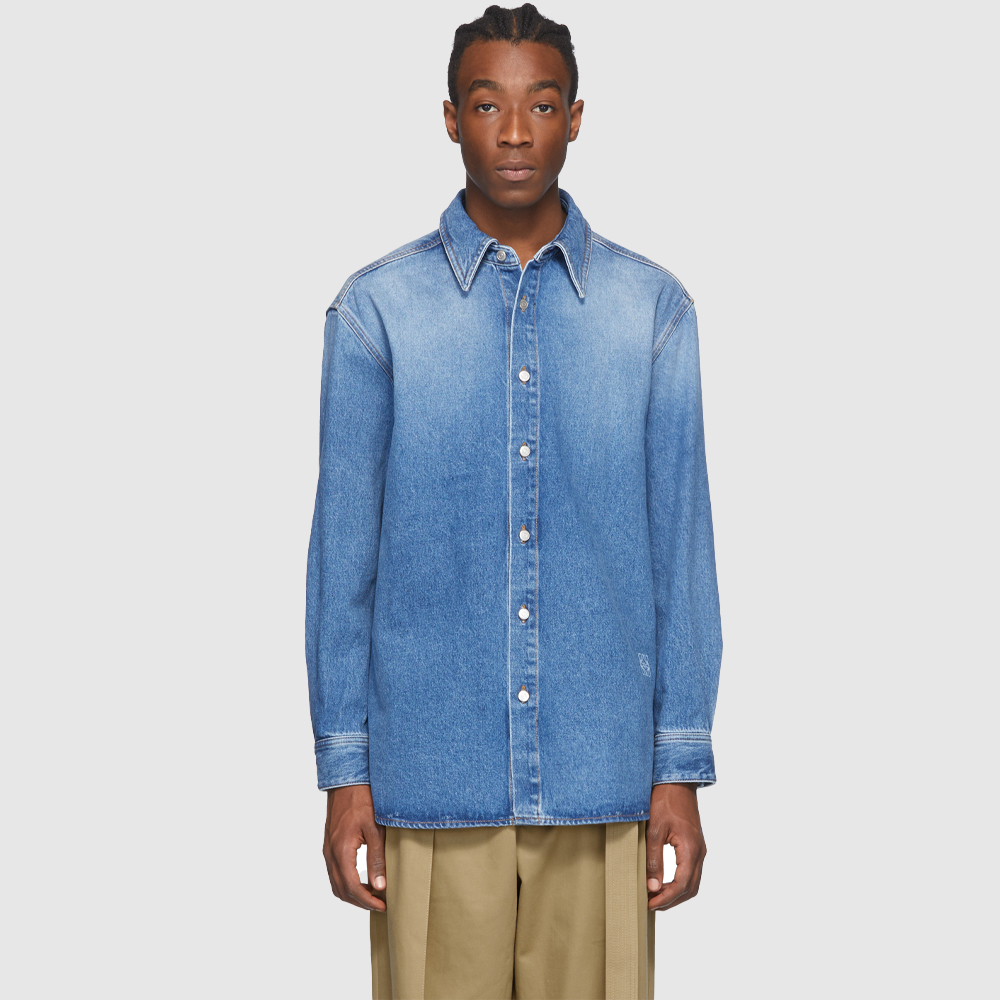 14 of 14
Loewe
For true high-end fashion though, look no further than Spanish brand Loewe. Often regarded as one of the world's most luxurious brands, Loewe has been in business since 1846, also making it one of the oldest.

It may look just like any other denim shirt, but Loewe's interpretation of the menswear classic has subtle touches that prove why Loewe is so well regarded. Contrast tan stitching, a perfect hanging length and a shirttail hem. Not to mention it's made in Italy, so makes for a shirt of incredibly high-quality.
Shop Now