G-Shock watches are virtually in a category of their own. Introduced by Japanese watchmaking giant Casio in 1983, G-Shock – Gravitational Shock – watches were developed with the intention of being the toughest time tellers on the planet, a feat they have accomplished on many occasions.

The over-the-top designs and bold use of colour don’t have much of a chance of winning any design awards (although one model featured later did do just that) but that’s because G-Shock watches are all about the substance and function they offer the wearer. Considering they’re a favourite of industries such as the military, what it looks like will be at the bottom of a list of ‘must-haves’.

What could be seen as the root of G-Shock’s success (or to some, a potential downfall) is the sheer number of models it produces. Basic models are updated every couple of years and limited edition models, such as collaboration editions, are released regularly throughout each year.

We’ve delved into the current model lineup to pick out what we believe to be some of the best available to buy right now. All of them share the same tough-as-nails attitude, but each has its own set of unique features. You’re guaranteed to find one to fit your lifestyle.

How durable are G-Shock watches?

G-Shock watches are proven to have high tolerance against electric shock, vibration and gravity. Their extra-rugged exterior and structural components make them the toughest watches available in the market today.

G-Shock watches are close to being waterproof since they are water-resistant to 200 meters. You can wear them during water activities, from diving and swimming to surfing and jet skiing.

How long can your G-Shock stay underwater?

Your G-shock IP Code indicates that it can stay underwater for up to 30 minutes, at a depth of one meter. This water resistant testing, however, is done under fresh water. 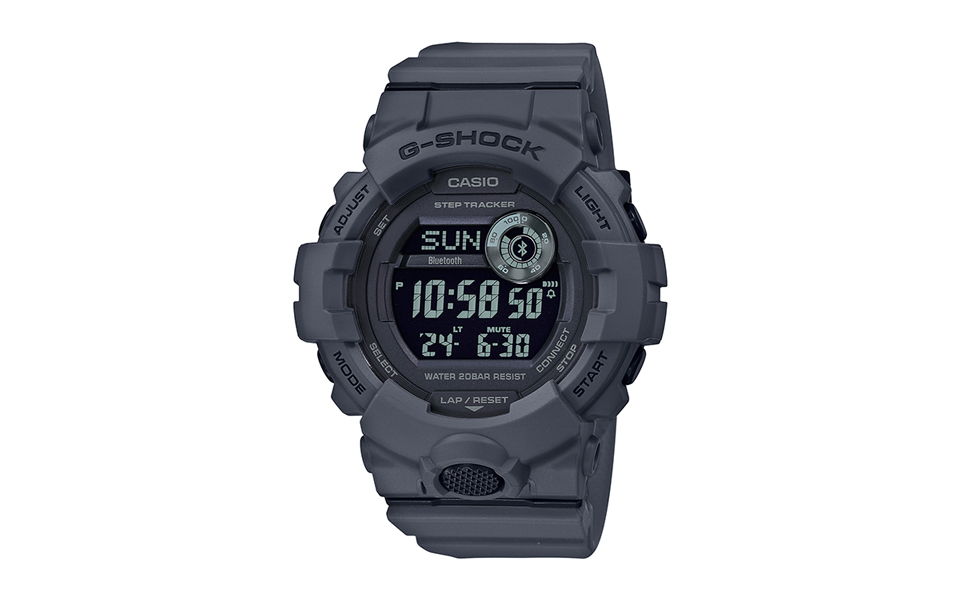 Part of the G-Squad series of sports-orientated watches, the GBD-800 is a hybrid of conventional watch and fitness tracker. It connects to a companion smartphone app to record data such as number of steps and stopwatch measurements and can automatically change time and zone based on your phone. You can even use it to find your phone if it gets lost. The list of functions is so long, in fact, we can't possibly fit it all in here. This G-Shock model is available in a range of colours, but the all-black is our standout favourite.
Shop Now 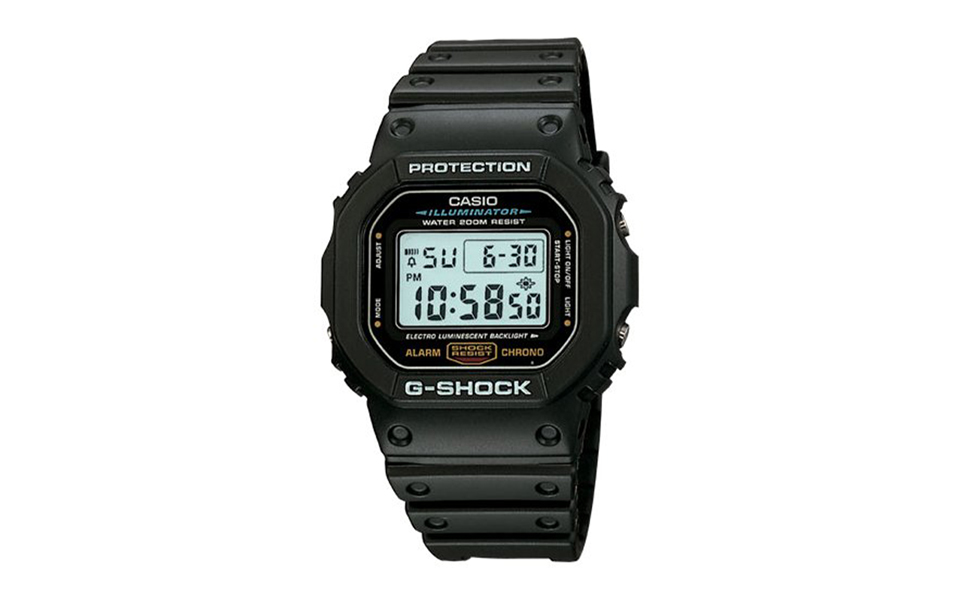 Watch fans worldwide should recognise the silhouette of the DW-5600. It's an iconic design and reminiscent of the basic Casio digital we would've all been exposed to growing up. This G-Shock model is solar-powered too, and claims to run as normal on even minimal exposure to light. Despite its basic design you still get a wealth of features include several alarms, timers and world time zones.
Shop Now 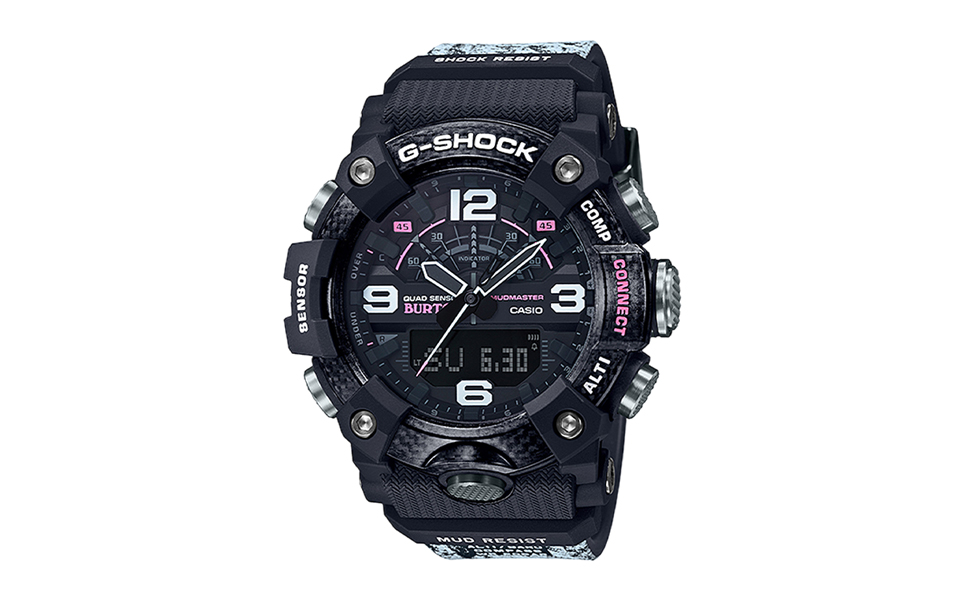 Who doesn't love a limited-edition collaboration timepiece? For the third time, G-Shock has teamed up with snowboarding brand Burton to create an exclusive iteration of the Mudmaster. It takes the ultra-tough Mudmaster and gives it a snow-inspired design, including subtle pink accents (and we all know real men wear pink). Features of this G-Shock model includes a compass, thermometer, sunrise/sunset times and altitude logging.
Shop Now 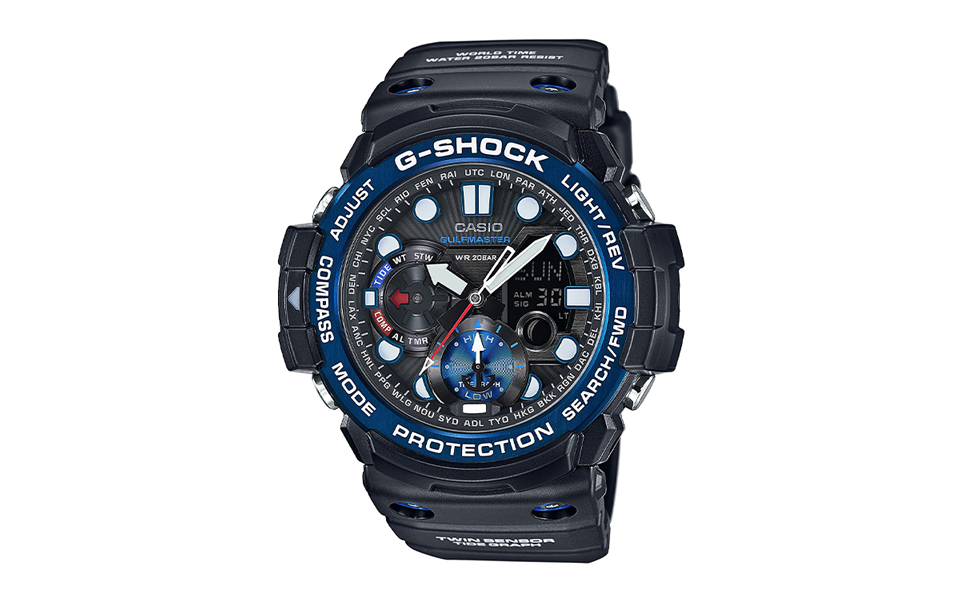 It's not just the big-name Swiss watchmakers who have their fingers in sea-bearing timepieces, but G-Shock has a capable seadog companion of its own. The Gulfmaster can measure atmospheric pressure and temperatures and provide the wearer with a compass (both analogue and digital) along with tide graphs and moon age display. There's a whole host of other features buried within to keep you safe on the high seas.
Shop Now 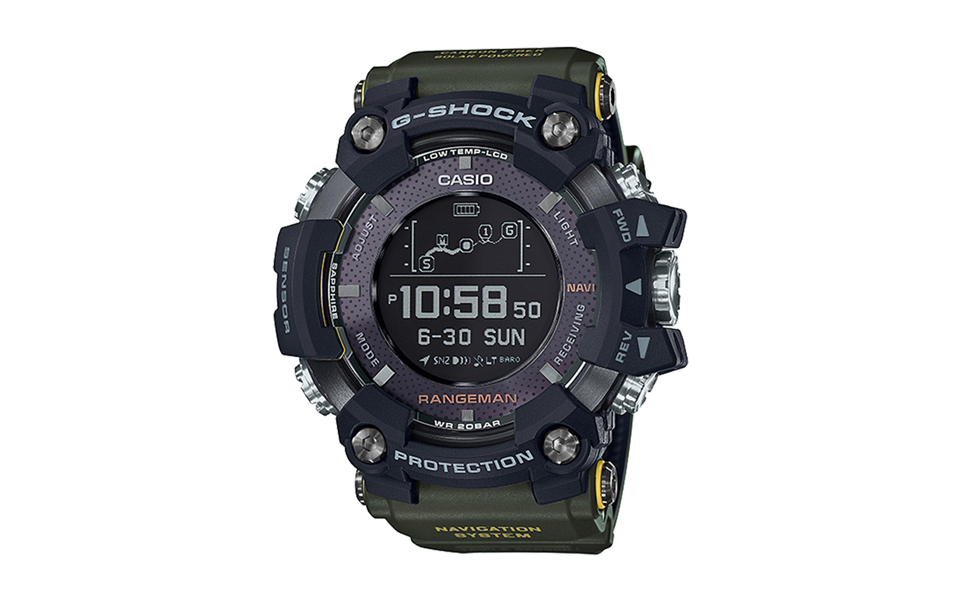 If you're after a watch that is protected against pretty much anything Mother Nature can throw at it, the GPR-B1000 is for you. Mud-resistance, dust-resistance, shock, low-temperature and water-resistance all taken care of, you really can go anywhere. And you'll have added guidance too, since this is the first G-Shock watch to feature built-in GPS navigation, which can be recharged via solar power.
Shop Now 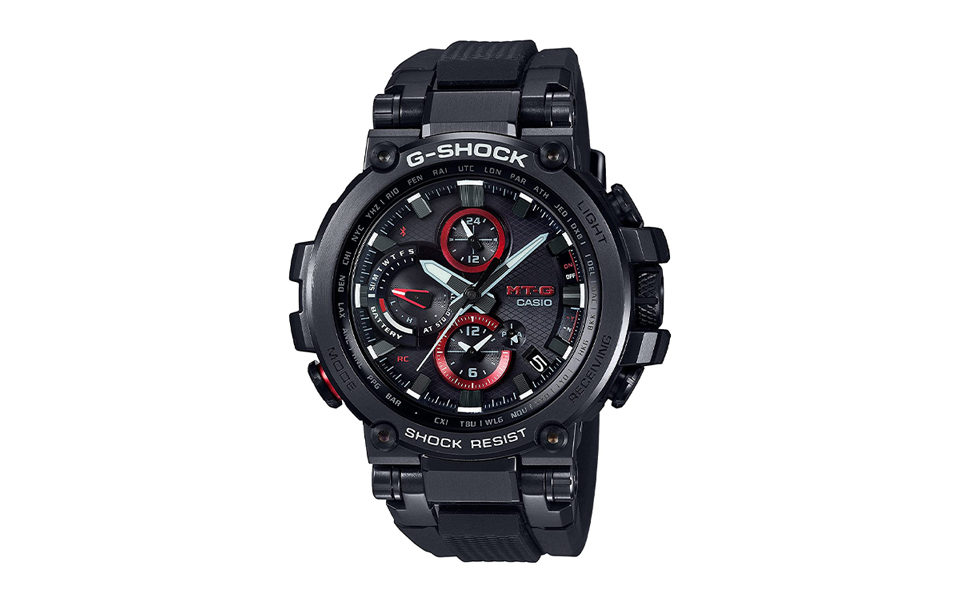 You may have a preconception that all G-Shock watches are oversized monstrosities, but when one of them wins an iF Design Award, that opinion should quickly change. That's the case for the MTG-B1000B, which combines metal and resin, with traces of carbon fibre to produce a slimline watch with integrated lugs. It's typically G-Shock on the inside, with smartphone connection and time-zone calibration by way of frequency signals.
Shop Now 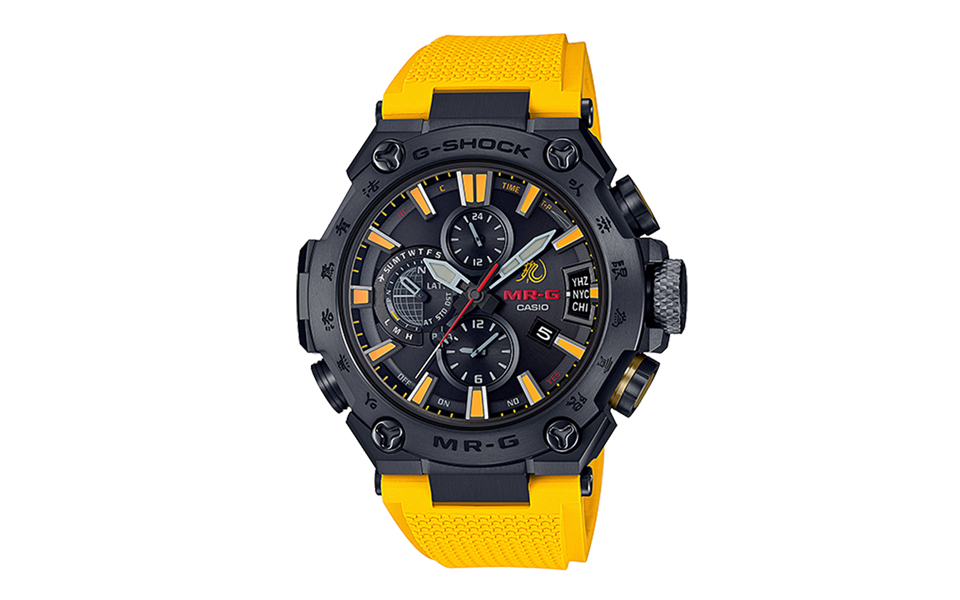 Nestled within the MRG-G2000 series of watches is this BL-9A model which has been made to celebrate the 80th birthday of kung-fu kicker of asses Bruce Lee. The black and yellow colour scheme is no coincidence, as it mimics Lee's iconic tracksuit, while additional red highlights represent Jeet Kune Do, a form of martial arts practiced by the maestro. Elsewhere it's normal G-Shock service: solar power, GPS and Bluetooth. Oh, and it's limited to 300 pieces worldwide. If you can find one, buy it.
Shop Now 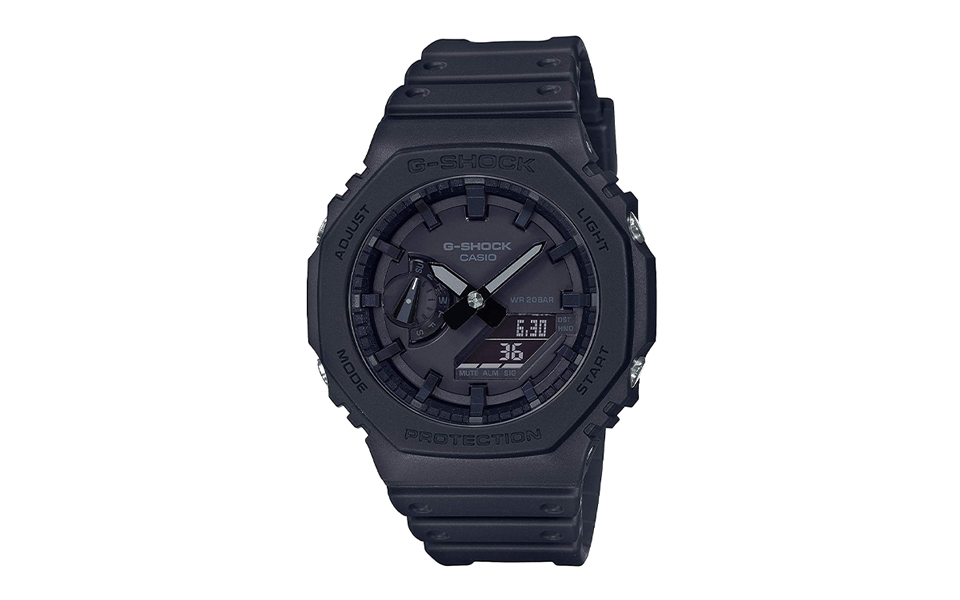 The GA2100 was released to much fanfare due to its uncanny resemblance to a certain Royal Oak. The octagonal bezel gives it a much fashionable look than some other G-Shock models, which is further backed up by dual analogue and digital timetelling methods. Factor in Carbon Core Guard technology for a lightweight yet shock resistant build, alarms, timer, stopwatch and 200-metre water resistance and it's an ideal all rounder.
Shop Now 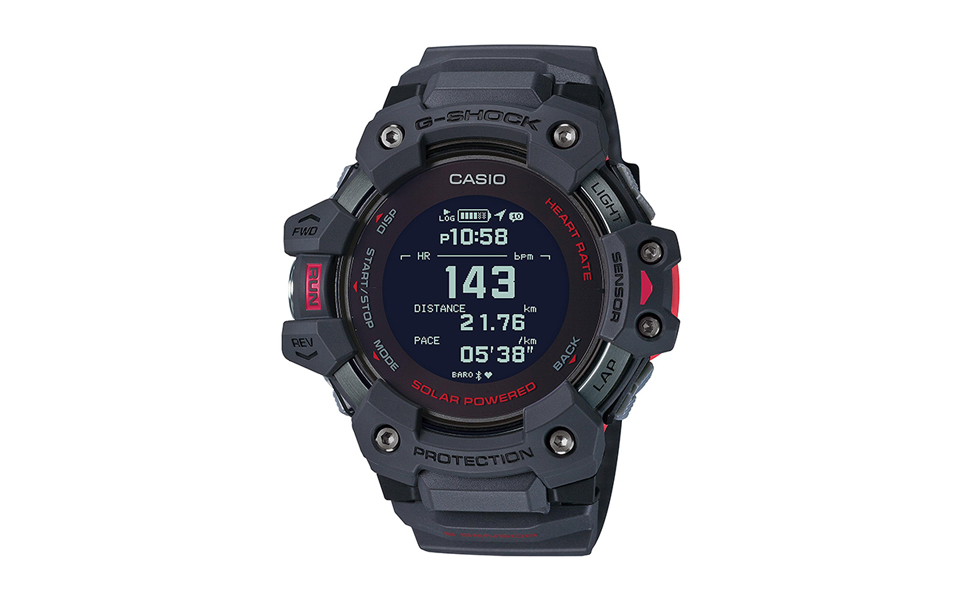 Another integral member of the G Squad series, the GBD-H1000 marries classic G Shock toughness with all the makings of a modern fitness tracker, including a heart rate monitor and GPS for tracking workouts on the go and without the need for a connected smartphone. A huge range of metrics can be tracked and you can also view barometer and thermometer readings. Basically, this G-Shock model can do it all.
Shop Now