After a spate of forty-degree celsius days, you might be asking yourself what it takes to survive the weather and still look the part. Our answer to this is men’s linen shirts.

It’s a fabric that divides opinion but no one can deny its durability and breathability qualities, in addition to its knack for playing the part in both casual and formal environments. Linen is the perfect substitute for cotton or (gasp) polyester shirts and with more balmy weather on the way we’ve found the best men’s linen shirts this summer – because you’re better than the muscle tank.

We’ve got a complete guide on how to wear your latest linen shirts and suits so that your A-game dominates this summer.

RELATED: Summer Menswear Trends You Need In Your Life 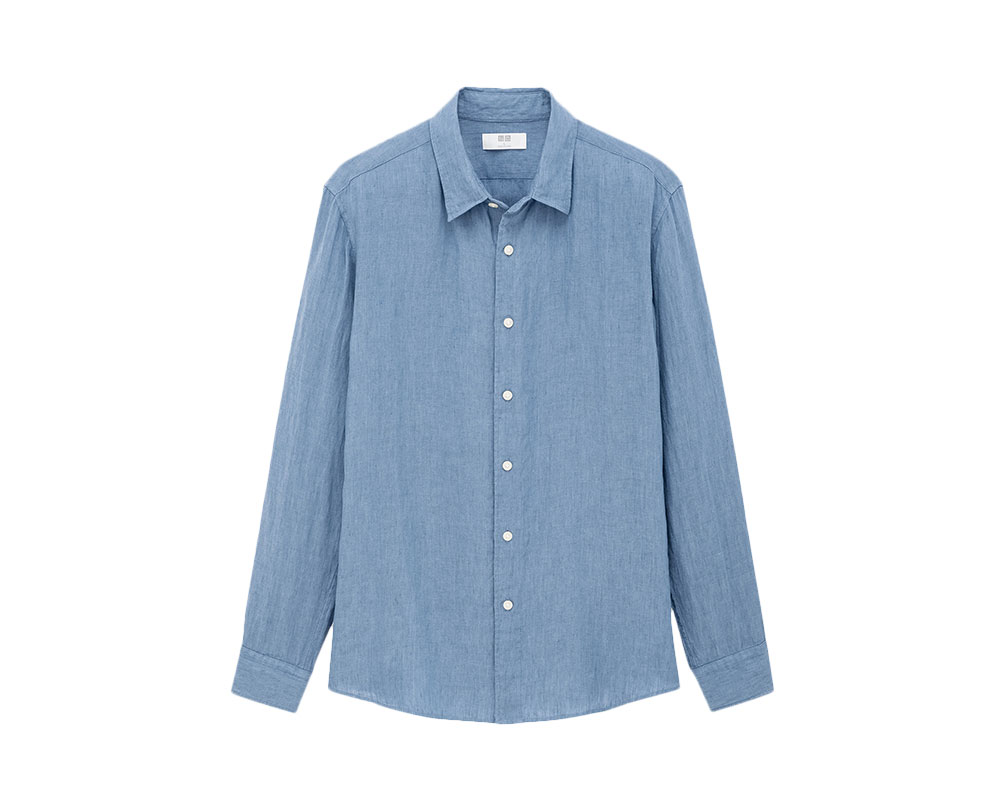 Sometimes less is more. In this case, Japanese brand Uniqlo’s men's linen shirts are top value for money. Available in a range of styles and colours the Uniqlo Linen Shirt is your must-have affordable basic. A word of warning they do sell out during winter so stock up before then.
Shop Now 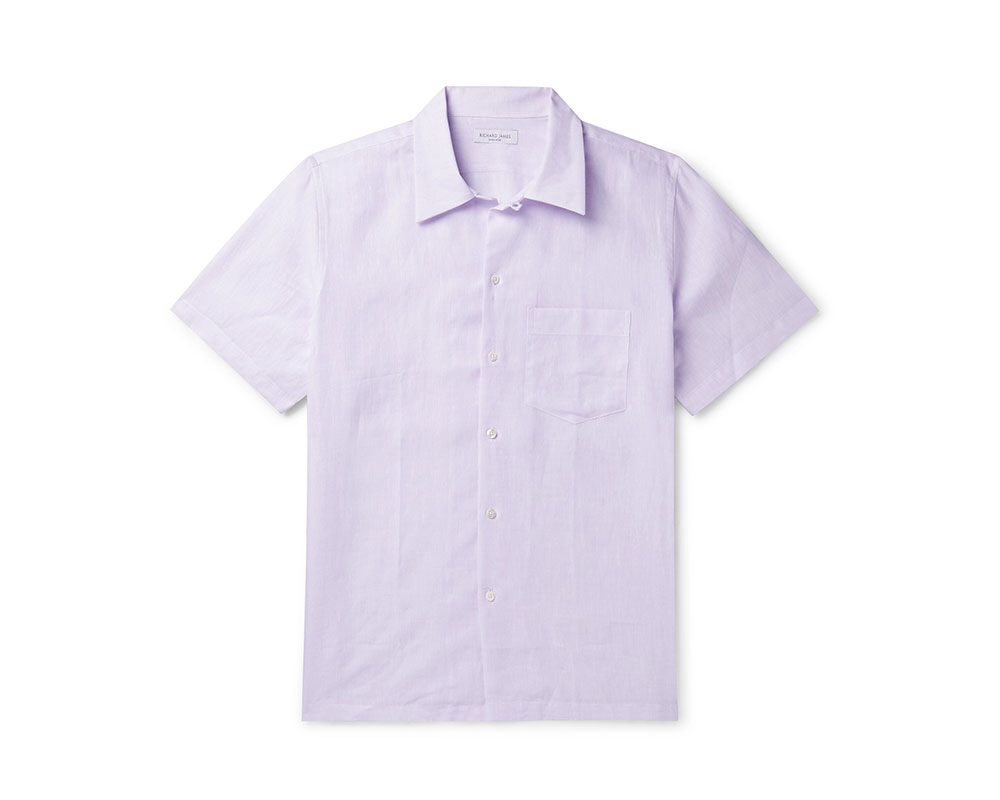 Richard James may be a bespoke Saville Row tailor, but you won’t find any of the tailoring hotbed’s prim and proper conservatism in his range of linen shirts. James’ men's linen shirts remind us of a Brooks Brothers throwback without the triple dose of an Ivy League aesthetic.

Made from a versatile cotton-linen blend in a regular cut, the linen shirts can work on their own with shorts or under a blazer for a smarter look. You can never have too many pale blue shirts and with RJ’s laser-precise production values it has our first vote of the day.
Shop Now 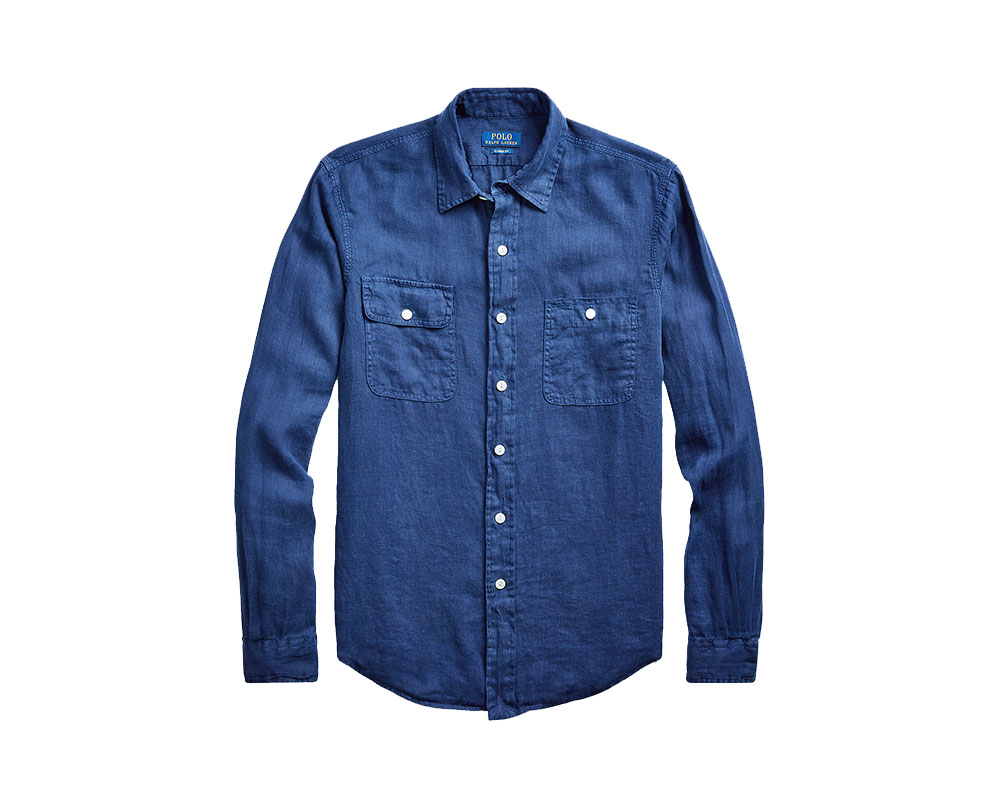 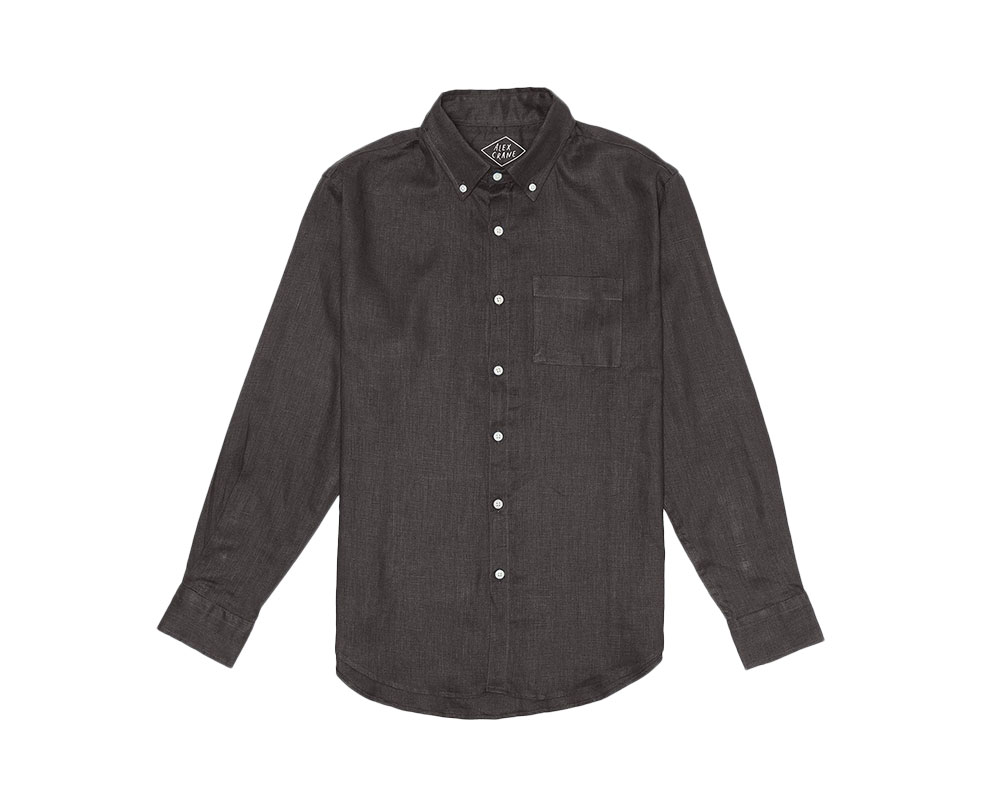 The finest Irish linen manufactured in Brooklyn Alex Crane is trying their damnedest to keep you light and breezy. Not only does this Brooklyn design duo have an unusual colour palette ( cue sequoia & dusk ) but they’ve also managed to capture the pyjama (matching tops and bottoms) trend with a touch of class. Best of all Alex Crane linen just gets better with wear. The longer you have it the softer it feels.
Shop Now 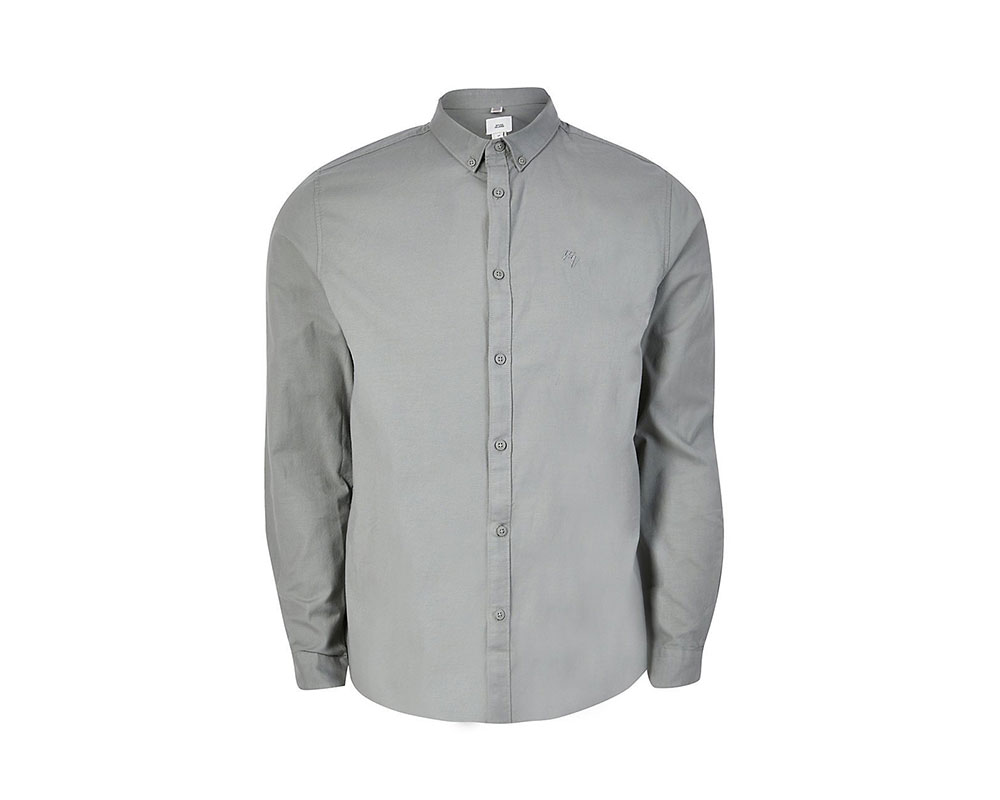 Again on the more affordable side of things, we have the British brand River Island. A simple and effective go-to menswear brand that offers both print and plain men’s linen shirts.
Shop Now 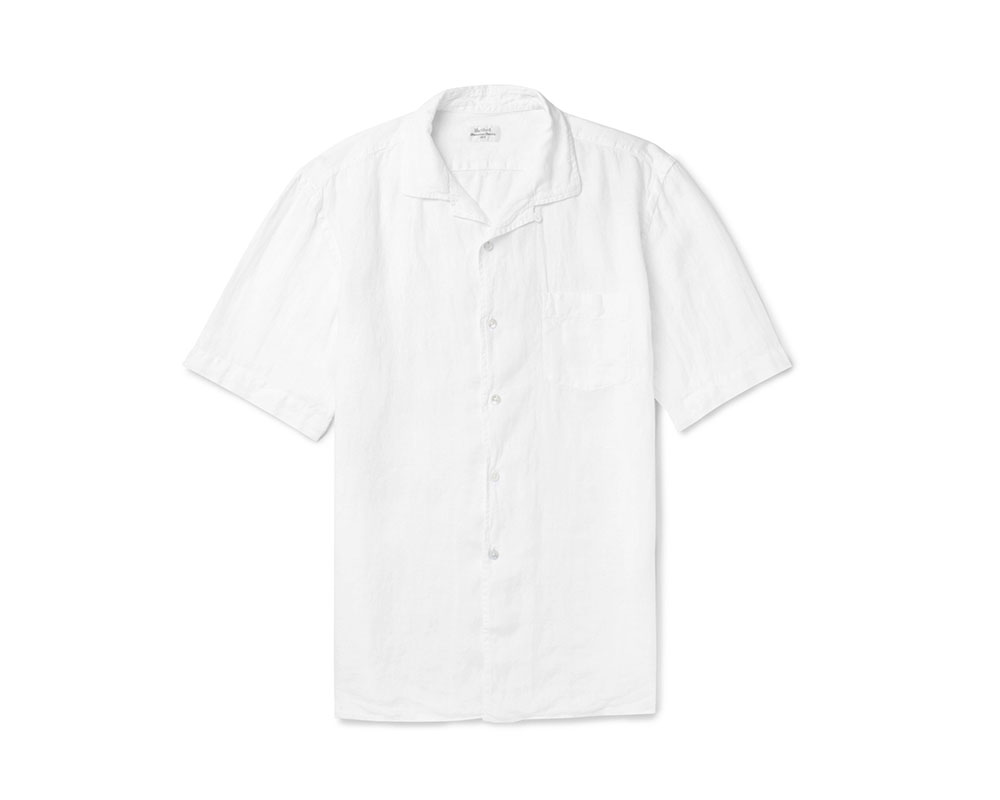 Don’t be fooled by the name – Hartford is much more than just another preppy knockoff. Steeped in American vintage style with some Transatlantic influence from the founder’s origin in Paris, Hartford employ premium fabrics like French linen and Albini cotton to produce leisurewear for all seasons.

Here, you’ll find men's linen shirts that Steve McQueen might wear (way better than you or I ever could). But with the hottest part of the year on its way we don’t blame ya for buying one of these linen numbers and giving it a shot.
Shop Now 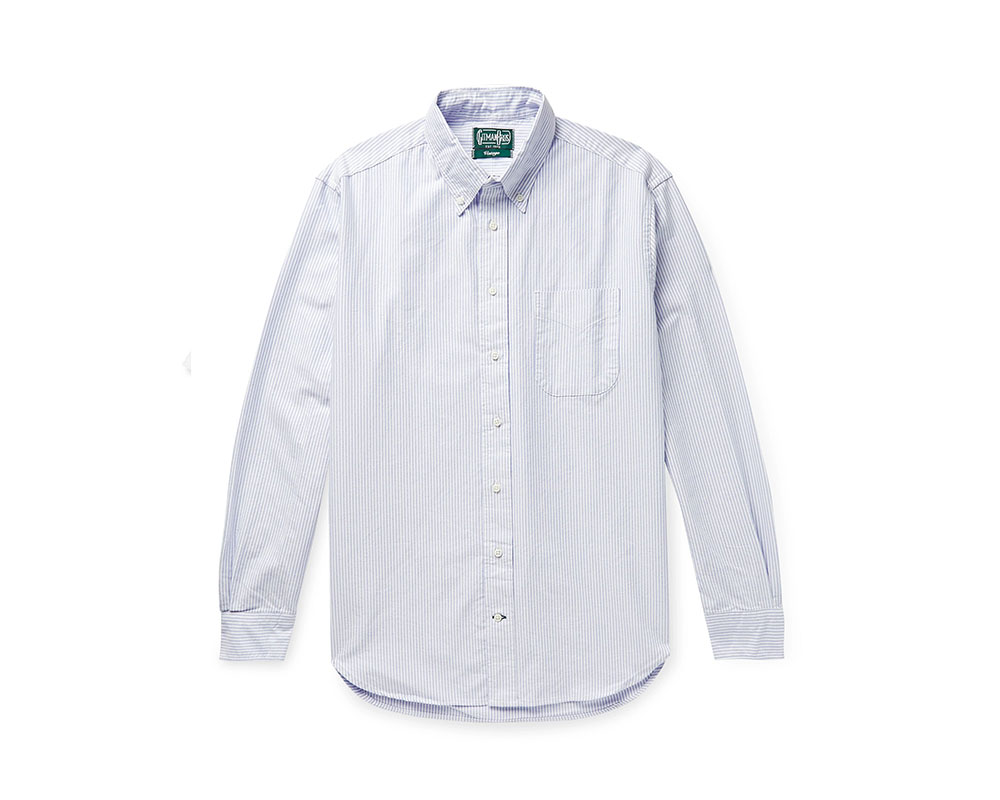 Taking the best parts of 60’s vintage cool with modern production and you have Gitman Vintage, a storied brand with decades of experience. Their men's linen shirts remind us of what the guys from Mad Men might have rocked (and looked dynamite wearing) on the weekends.

You can mix these with shorts and slides on a hot day or chinos and oxfords if you’re hitting up the nicer side of town. At over three hundred bucks a shirt, they’re aspirational for most of us, but a guy can dream when it’s forty-three degrees and his last Bintang singlet is in the wash.
Shop Now 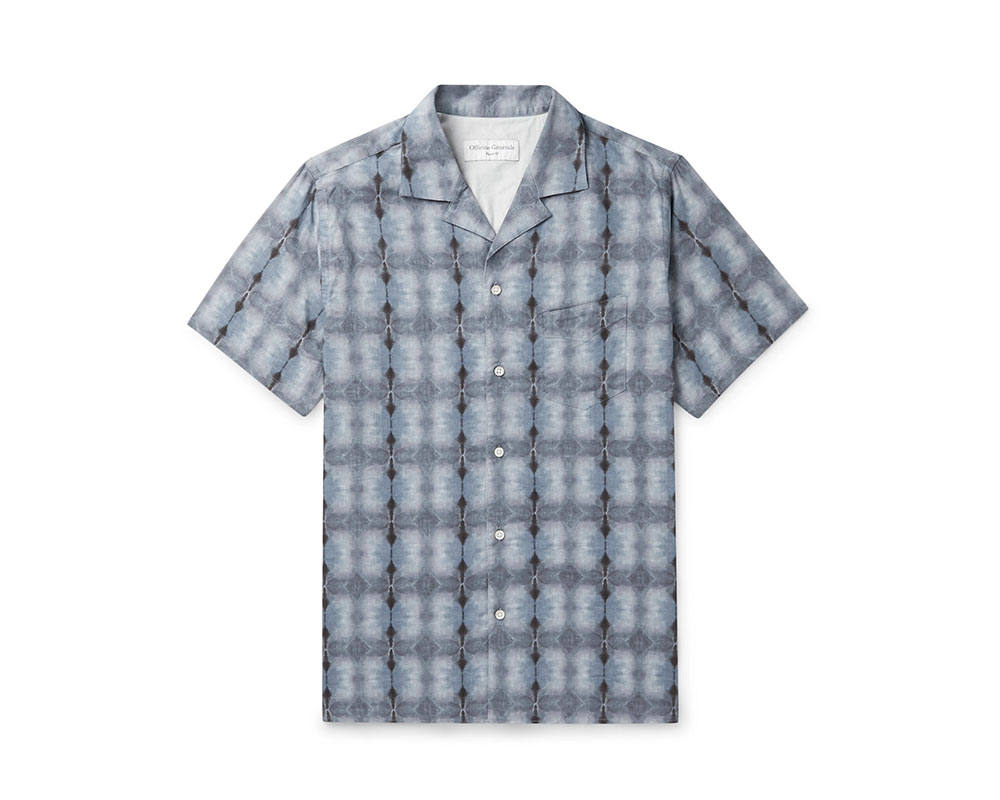 It should be no surprise that camp collar shirts have enjoyed a massive resurgence of late. Somewhere between a sincere throwback and something your uncle might have worn to a party in the late seventies, this bold geometric print Officine Generale shirt is a dynamic alternative to a plain white or blue shirt.

It’s made from an even linen-cotton blend and is cut to a more relaxed fit for the weekend. This seventies period piece might not be the most subdued option you have, so be disciplined and pair it with understated neutrals in the rest of your look.
Shop Now 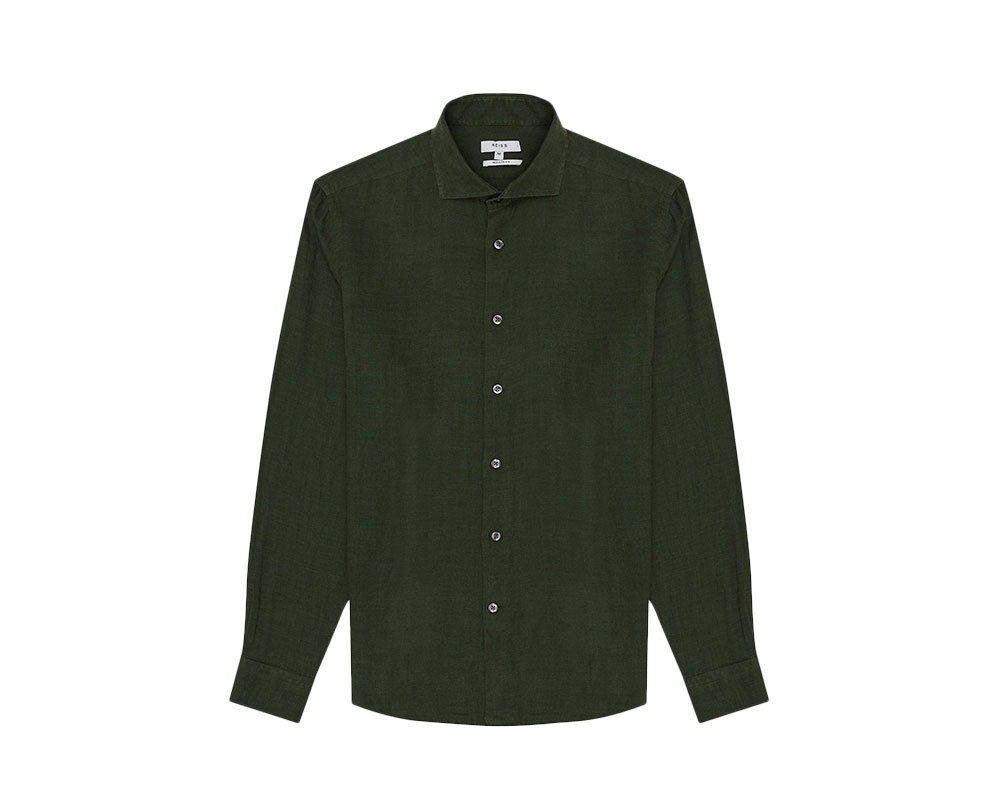 Reiss might not have the history or credentials of other British labels, but their ascent to the top of the menswear mountain has been almost unstoppable. Their men's linen shirts are cut to a slim fit and feature button-down collars and pure linen construction.

Wear them with white shorts and sneakers or a pair of relaxed linen pants for a lazy day. Reiss are on their way up – they go on sale pretty often and are very contemporary for a Brit label so keep an eye on their site.
Shop Now 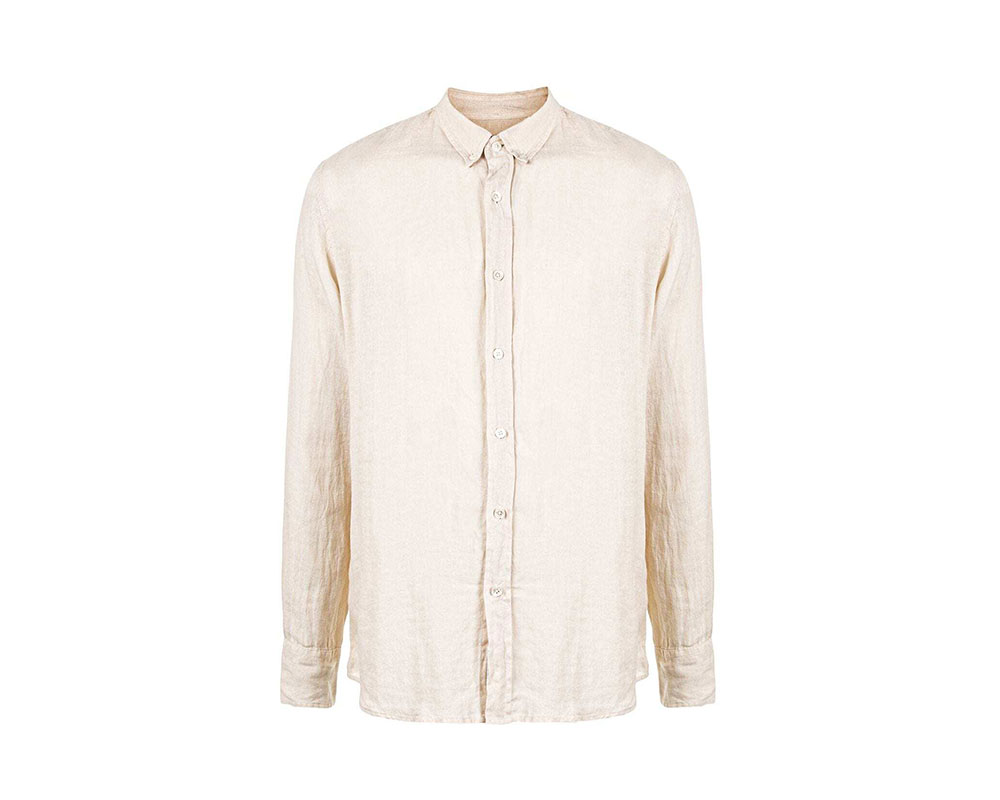 Venroy continues to improve Australia’s legacy as a leisurewear mecca with summer staples at an accessible price point, and their range of men's linen shirts are perfect for summer.

Mix them up with patterned shorts or for a smarter alternative with chinos and boat shoes for a night out. Venroy won’t destroy your wallet, and it’s worth having a suss of their swimwear while you’re at it.
Shop Now 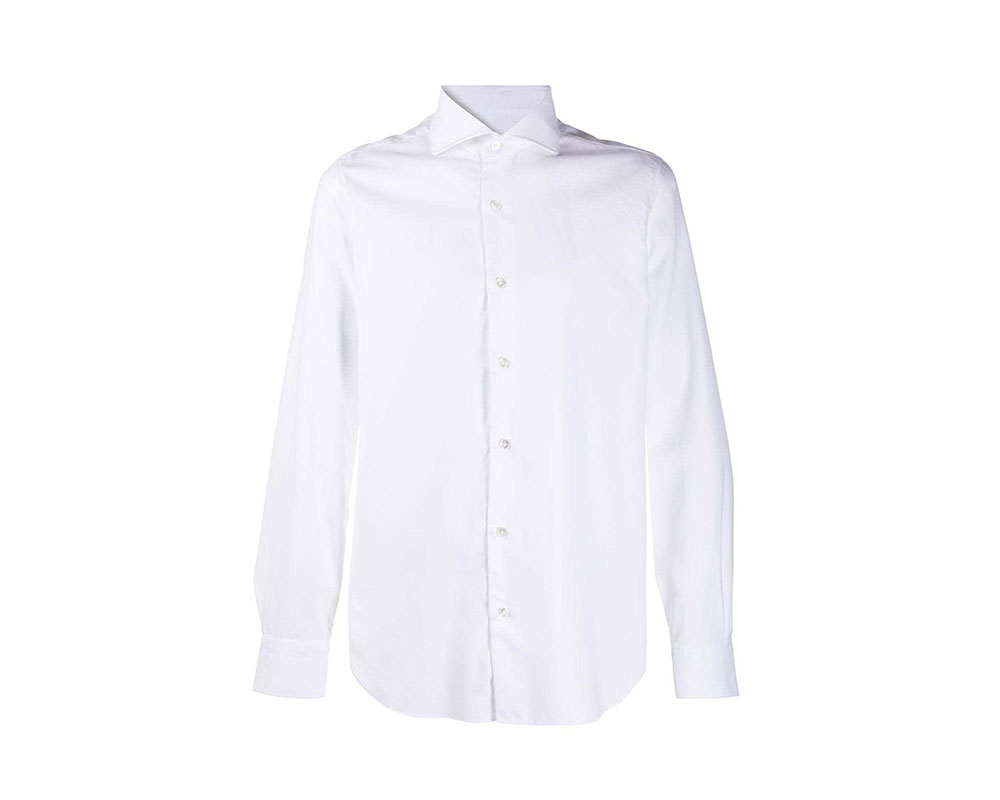 White shirts are a wardrobe non-negotiable and it always pays to have a linen option when it’s just too hot for anything else.

Here, Barba has combined summer tailoring with a slick corporate look that can straddle the line between work and play. Featuring a cutaway collar and slim (but not skinny) fit, Barba’s understated white linen shirt works equally well under a cotton suit or on its own with jeans or chinos.
Shop Now 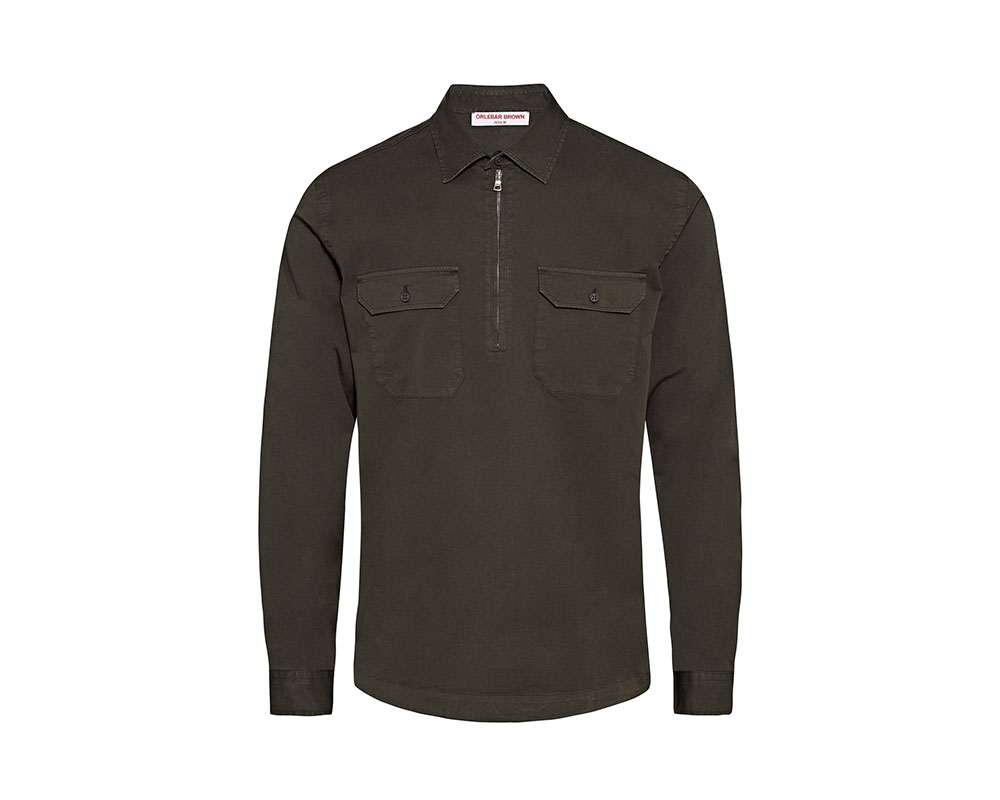 Originally the guys who made ‘smart swimwear’ a thing, Orlebar Brown have confidently expanded into menswear that takes the touristy bogan out of summer vacation style.

Orlebar Brown's men's linen shirts are a slightly dressier alternative to a polo or short-sleeve button-down. Wear them with cream or tan chinos and your favourite holiday slides, or white shorts and Common Projects kicks.
Shop Now 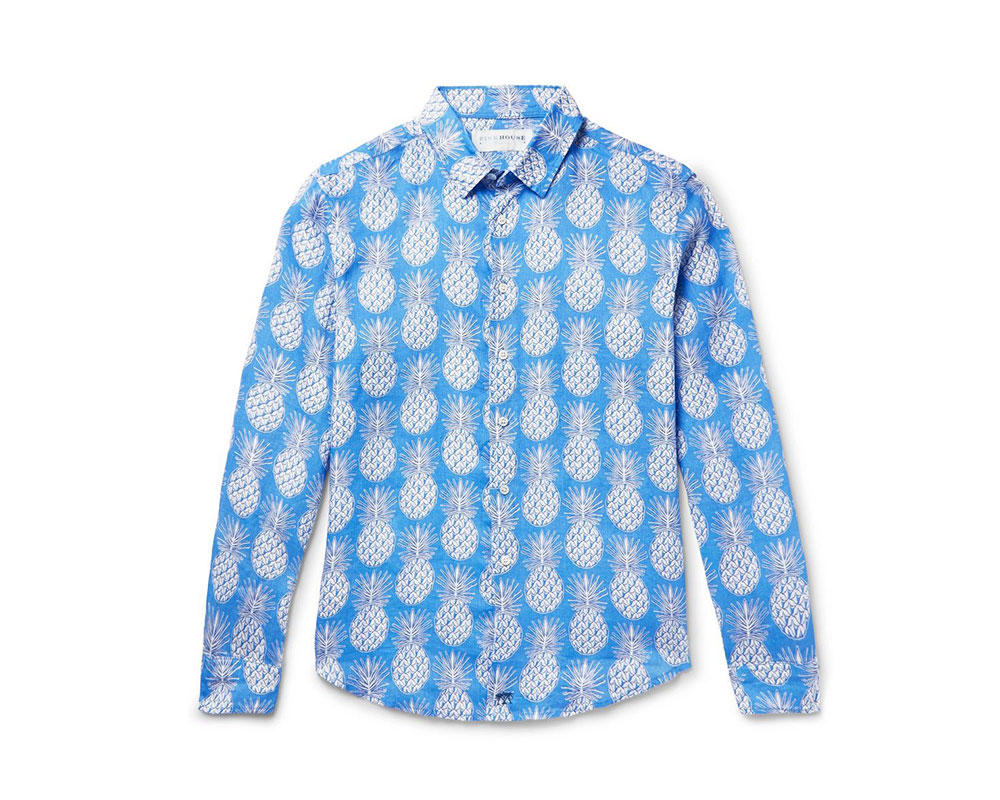 Any sensible style guru would tell you to buy the staples first, but it’s also good to have a few shirts that remind you it’s okay to have a bit of fun every so often.

Pink House Mustique's men's linen shirts draw inspiration from the founder’s connection to the Caribbean with bold prints and looser cuts. Pink House Mustique isn’t shy of the bold and aggressive patterns, so keep everything else you pair with them on the understated side with soft neutrals and block colours.
Shop Now 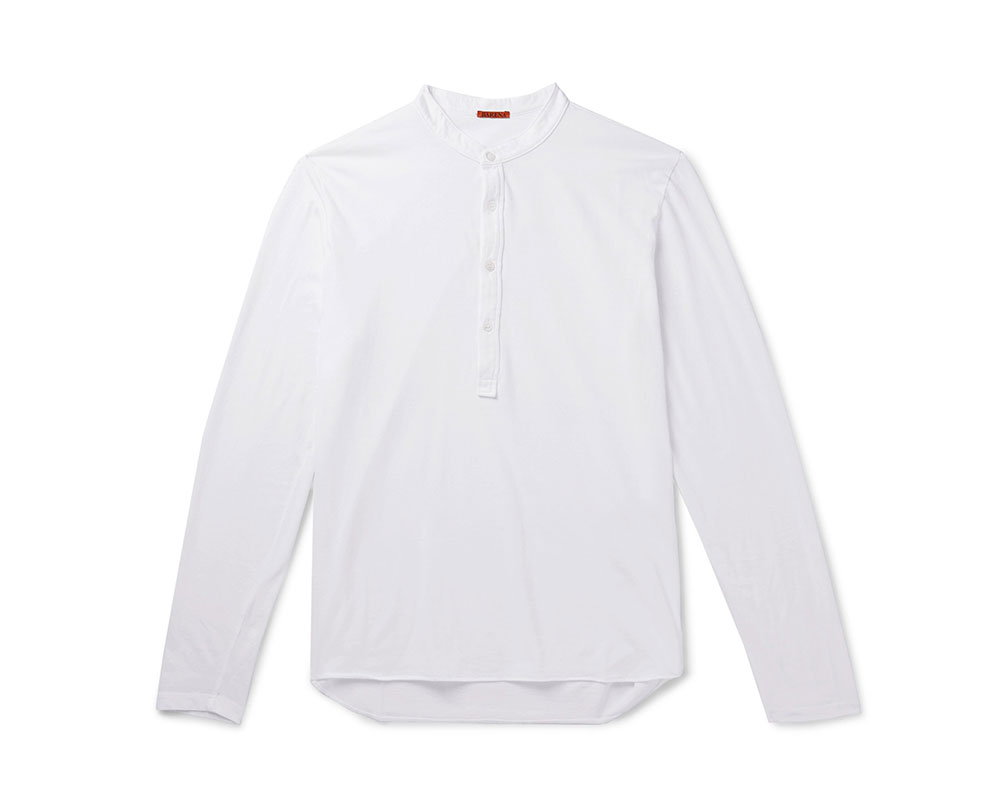 Barena’s summer collections are inspired by both the practical considerations of Venetian tradesmen and the necessity of looking good during the worst parts of climate change. Their men's linen shirts are all breathable and summer-friendly thanks to being crafted from 100% linen.

Barena's linen shirts can be easily dressed down with shorts and white sneakers or you can take a more formal approach with pleated pants and loafers.
Shop Now

Best Denim Shorts To Give You A Little Edge

Cool Sweatshirts For Men Who Need Warmth In Their Lives