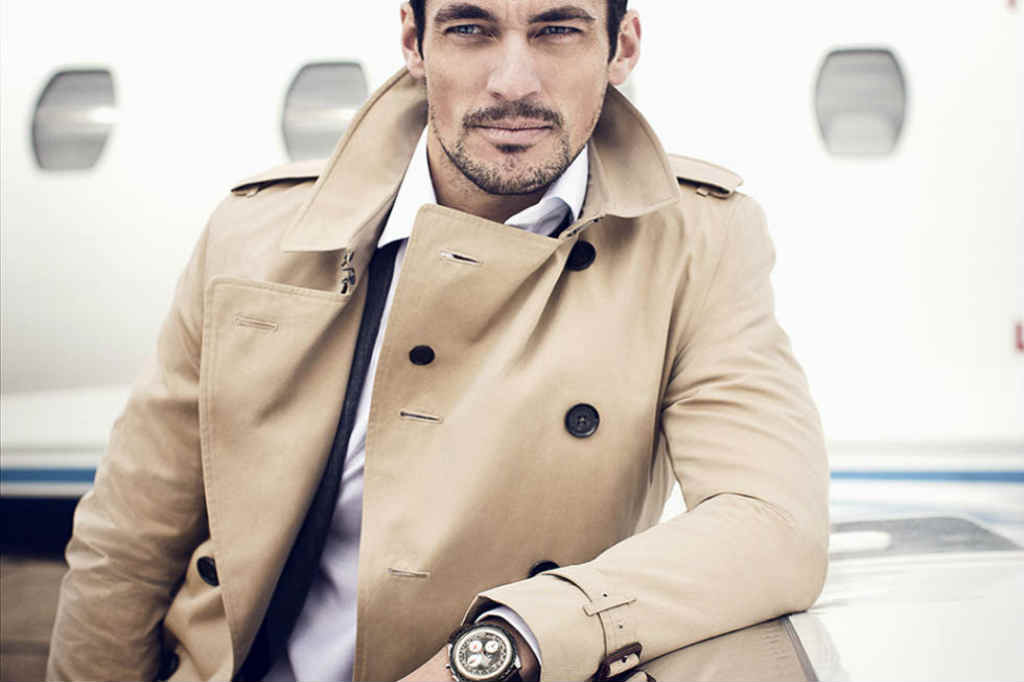 The trench coat can sometimes be an outerwear piece that goes overlooked. Designed to protect military soldiers from the elements while in the trenches – where it gets its name – those same soldiers continued to wear them when they returned home, cementing their place in fashion history.

It was first conceived by Thomas Burberry – the founder of Burberry – after he invented the gabardine fabric in 1879. Gabardine proved crucial to the trench coat’s success, as its tightly woven, tough and water-resistant properties meant it was well-suited to life in the trenches.

Most trench coats should follow similar style rules: double-breasted button fastening, wide lapels, a storm flap, front pockets and a belt. And while trench coats of old would have only been available in khaki green, today there are numerous colour options, with navy and stone being among the most popular.

The trench coat can often be confused with the mac (or Mackintosh), but they are in fact two separate pieces. The mac is actually older than the trench by roughly 100 years, with the very first mac coats being made, by Mackintosh, from a fabric that combined naphtha and crude rubber in a two-layer construction to make it waterproof.

Mac jackets also tend to forego any excessive use of external buttons and shouldn’t feature a belt. As you’ll see below, however, some brands like to tear up the rulebook.

Since the trench coat has become such a popular outerwear piece, several fashion labels have taken it upon themselves to produce their own versions, and online fashion stores such as SSENSE and Farfetch have large ranges under one roof. We, therefore, felt it our duty to provide you with a guide to the very best trench coats available to buy right now.

What material are trench coats made of?

A trench coat is typically made of heavy-duty gabardine drill, leather or poplin. Nowadays, most manufacturers use cotton, often mixed with man-made fibers to make it weather resistant.

What is the best length for a trench coat?

The standard length is two-inches above the knee or mid-thigh. For sleeve length, it must reach the center of the meaty part of your thumb and should be no shorter than your wrist bone.

What is the difference between a trench coat and an overcoat?

Your trench coat is designed to protect you against the rain, while an overcoat is for the cold. It is also lightweight, while the overcoat is heavier because of the materials used. 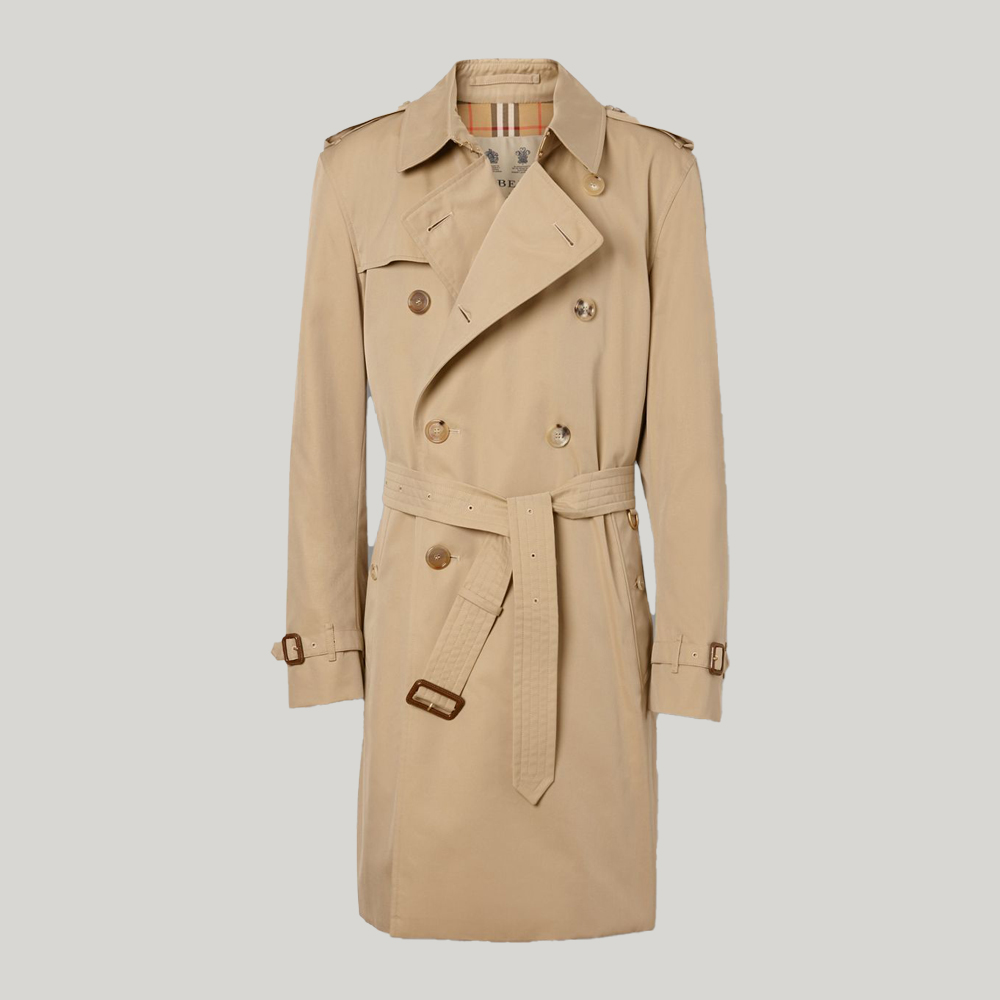 The very fact Burberry is responsible for the trench coat's existence means it earns a place at the top of this list. Having remained a menswear staple over 100 years later, Burberry has remained true to the original design and style. The Mid-Length Kensington Heritage utilises the brand's own gabardine material and displays all the traditional features of a classic trench, including buckles on the cuffs (treated with calf leather) and in true Burberry style, you'll find the signature check design underneath the collar.
Shop Now 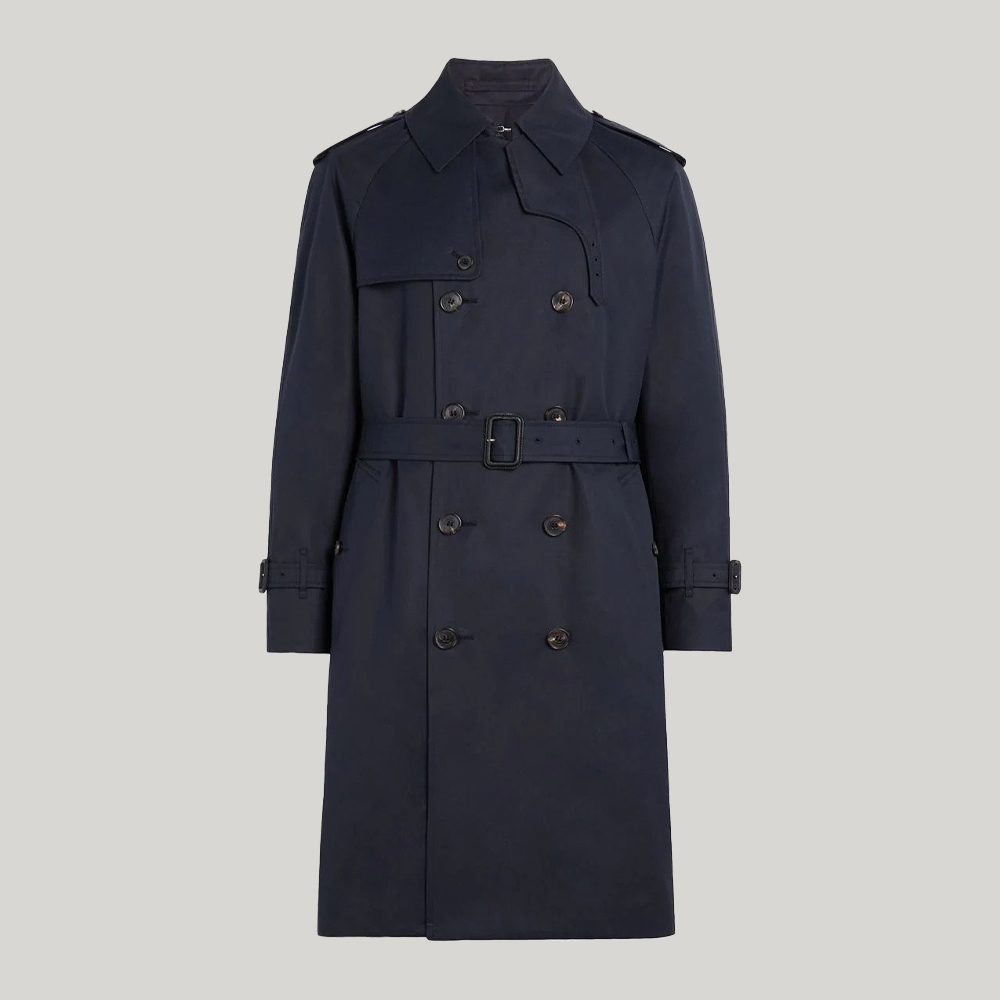 Mackintosh is the brand that introduced a longline waterproof overcoat to the masses long before the trench came to be. It's also the brand that spawned the colloquial term 'mac'. Mackintosh coats are handmade with such an intricate process that only a limited number are produced each year and all coats are made at the factory in Glasgow, Scotland. While the company obviously produces its own style of coat, it also has its own version of the trench. It's still made from its own bonded cotton fabric, which sees two layers of cotton bonded and taped together with a water-resistant tape to ensure you stay dry.
Shop Now 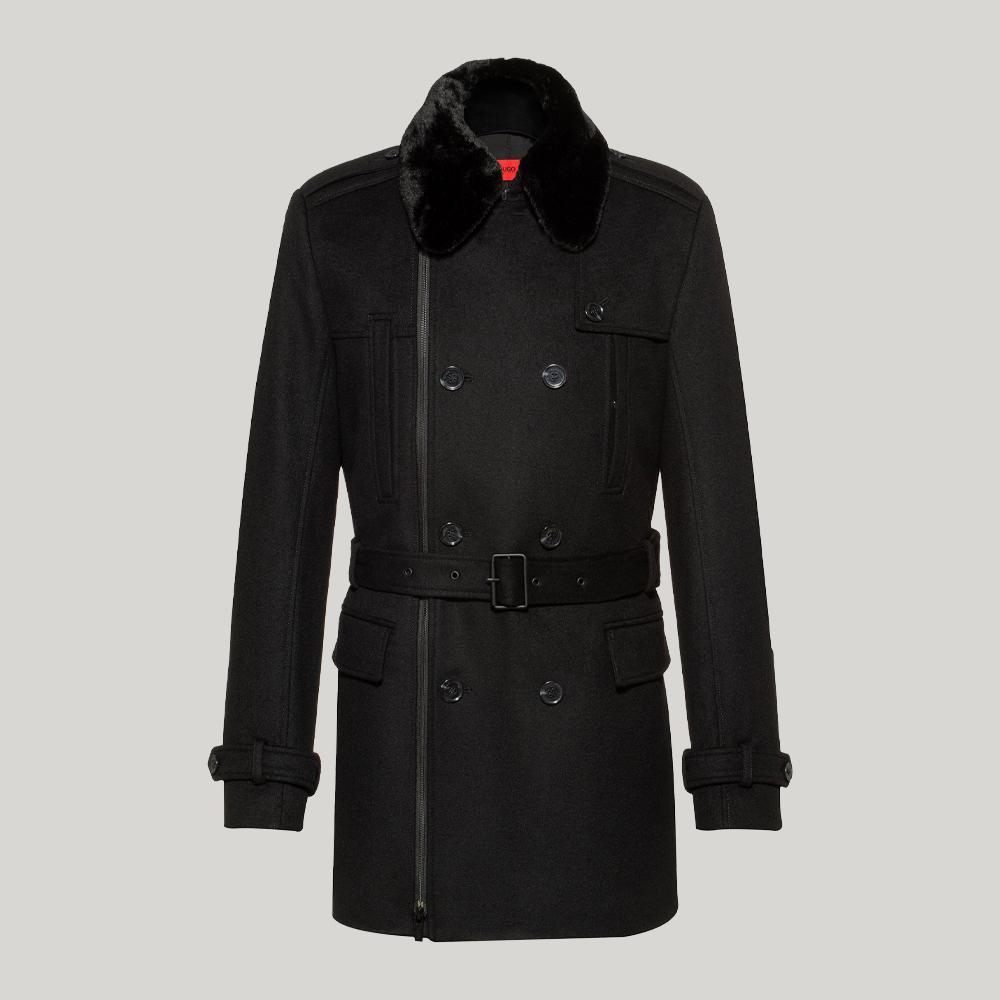 If true bachelor style is more your cup of tea, Hugo Boss is the go-to brand for your trench coat needs. The German fashion label is no stranger to sartorial style, and that knowledge is carried over to its outerwear ranges. Not only does Hugo Boss have the traditional trench coat style in its repertoire in stone and navy colourways, but you can even get a version with a faux-fur collar for extra winter warmth.
Shop Now 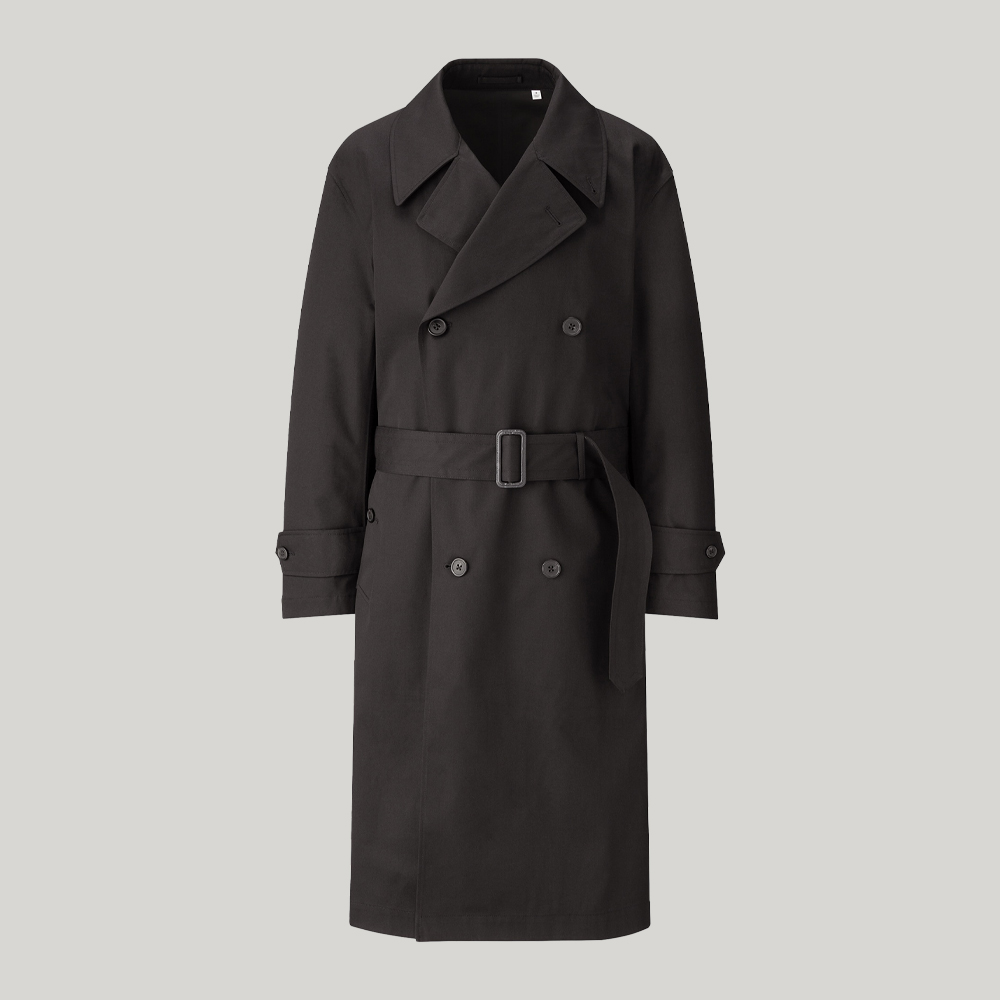 It feels like Japanese brand Uniqlo is getting ever more popular by the day, and for good reason. The fashion label ticks off all the menswear essentials, makes them out of durable fabrics, designs them well and sells them for incredibly affordable prices. That's certainly true of its trench coat range, which takes the iconic design but updates it using modern materials, such as its Blocktech fabric technology. This utilises 2.5 layers to protect you from wind and rain, while remaining breathable and cool.
Shop Now 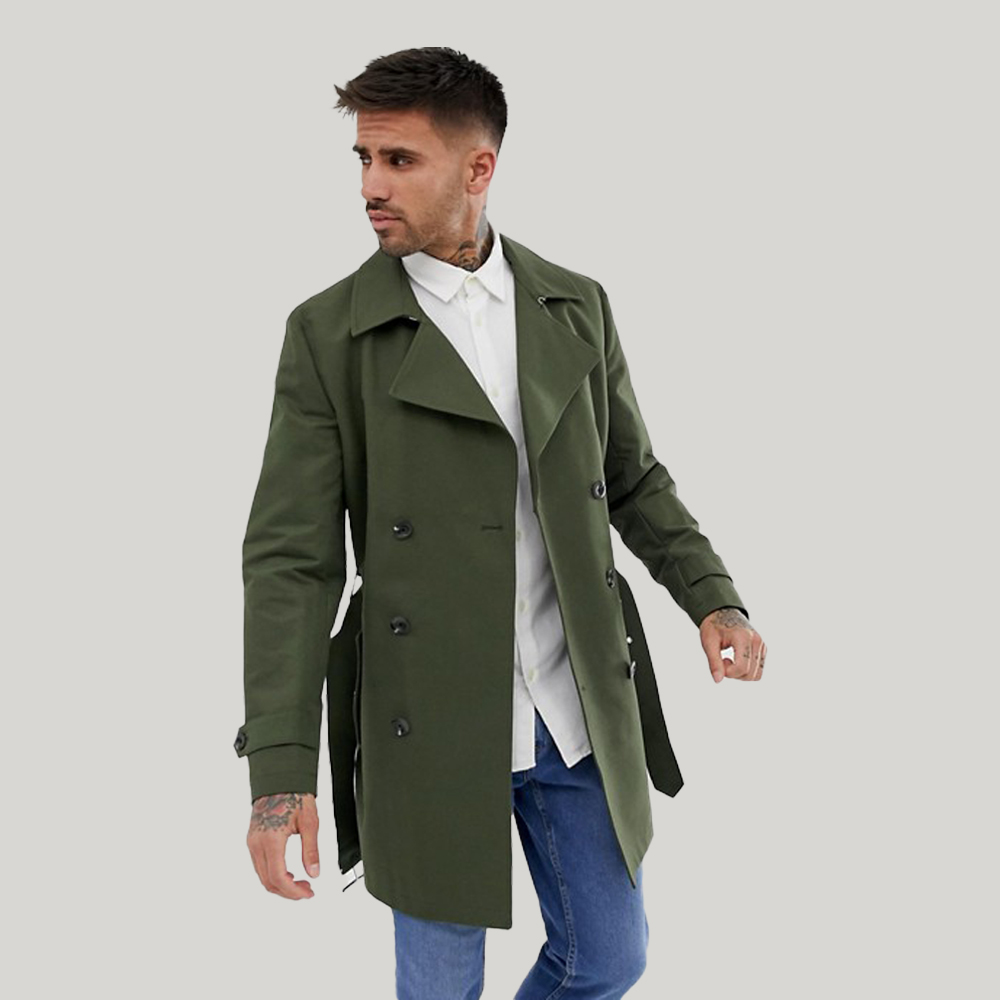 If you want to veer away from the traditionalists and invest in a trench coat that will have you standing out from the crowd, check out ASOS' range. The online-only retailer has an incredibly array of colours, styles and fits, all from its own ASOS Design label. No matter which trench you go for, it won't break the bank, but it will up your style game no end.
Shop Now 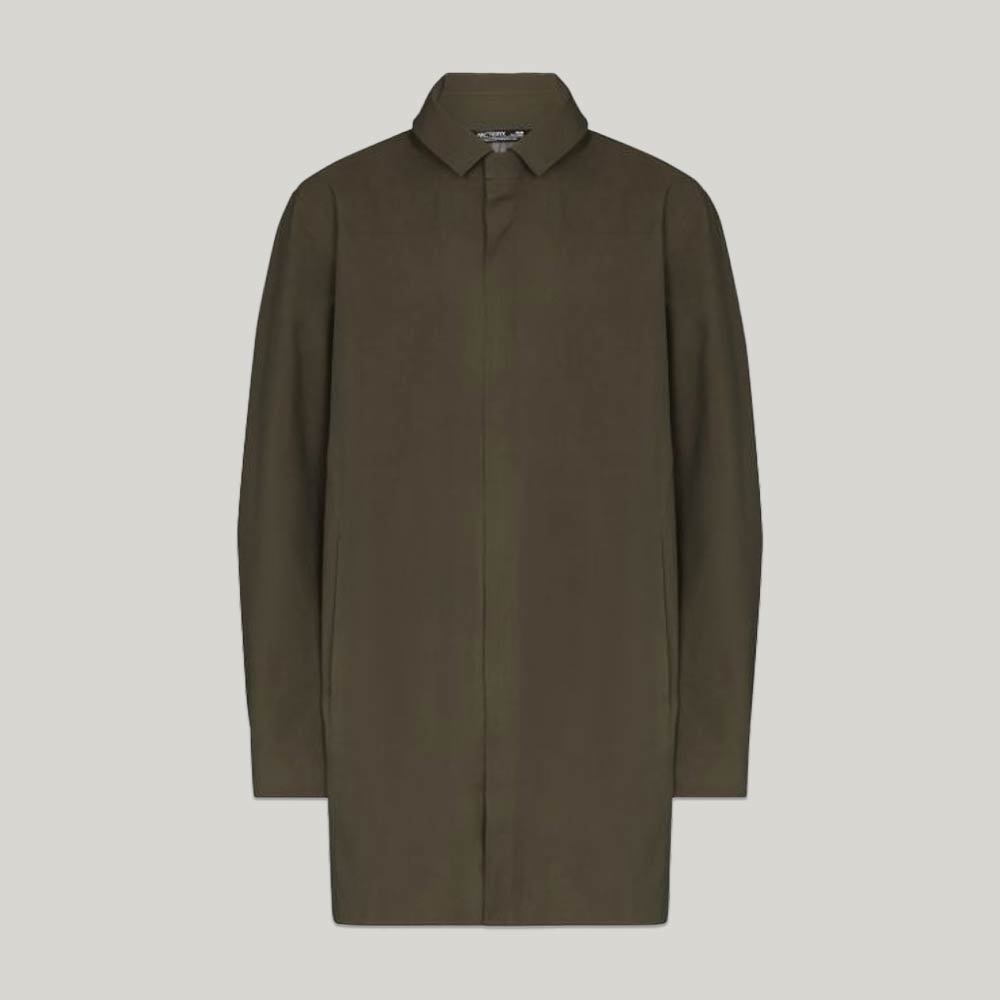 Canadian brand Arc'teryx is already know for its range of outdoor clothing and its ability to withstand the worst Mother Nature can throw at it. You can rest assured then that the company's trench coats will be just at adept at banishing rain and keeping you well protected.
Shop Now 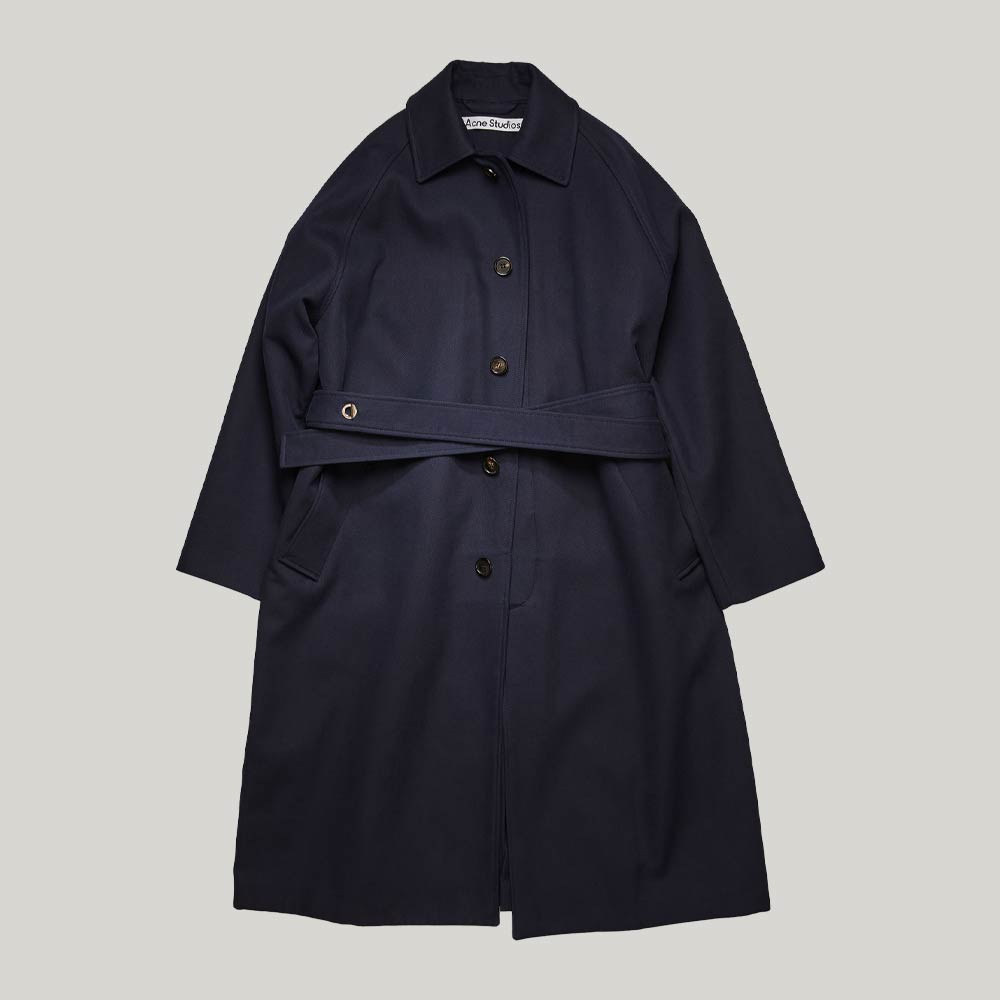 Knowing how to take a classic piece and give it an alternative edge, Acne Studios puts its unique stamp on the trench coat with this navy number. Made from a cotton twill fabric (so perhaps not as waterproof as its gabardine cousins) and cut to an oversized fit, you do at least get the traditional belt and front pockets, along with wide lapels. Acne's trench is a perfect autumnal upgrade.
Shop Now 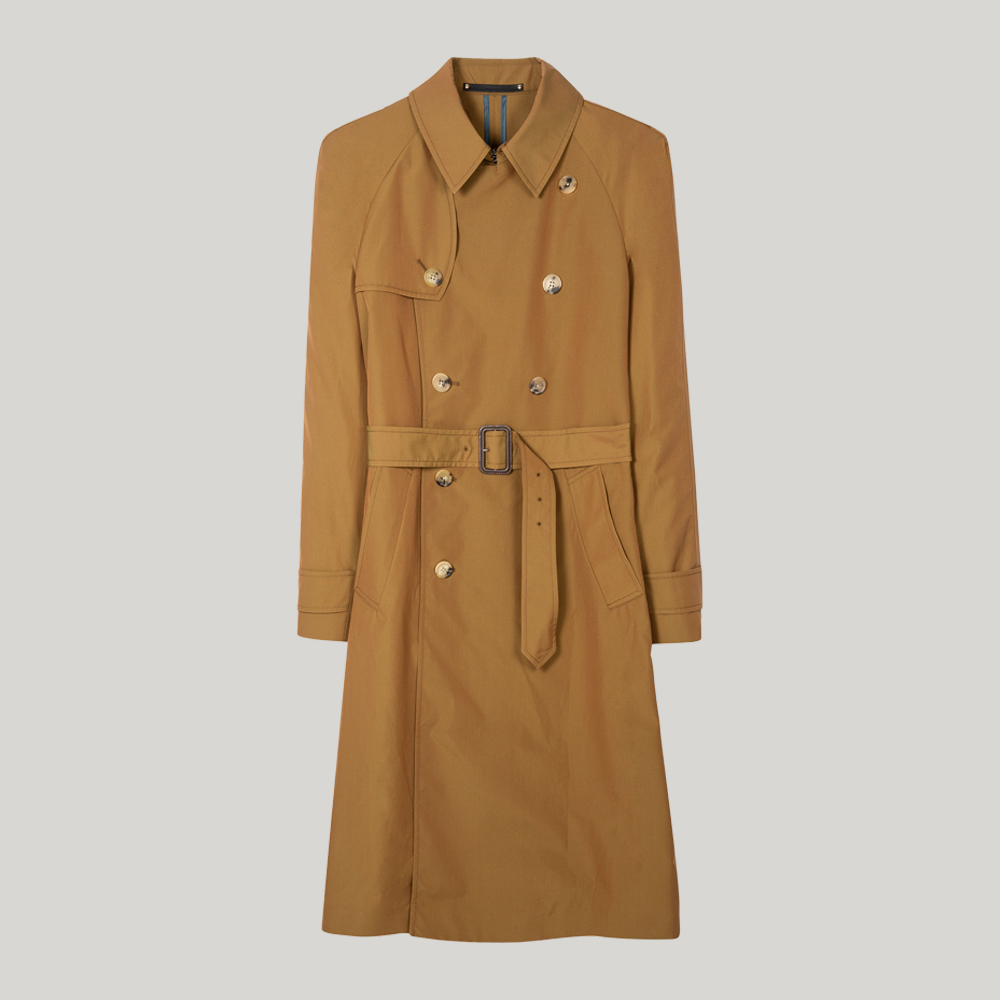 British fashion label Paul Smith certainly knows a thing or two about style, so naturally, it has a trench coat design of its own. Among a sea of well-designed coats and jackets in their own right, is a camel-coloured trench coat that is made from an Italian iridescent cotton that appears pink when it gets hit by light. Elsewhere its business as usual for the trench, with this piece hanging just below the knee.
Shop Now 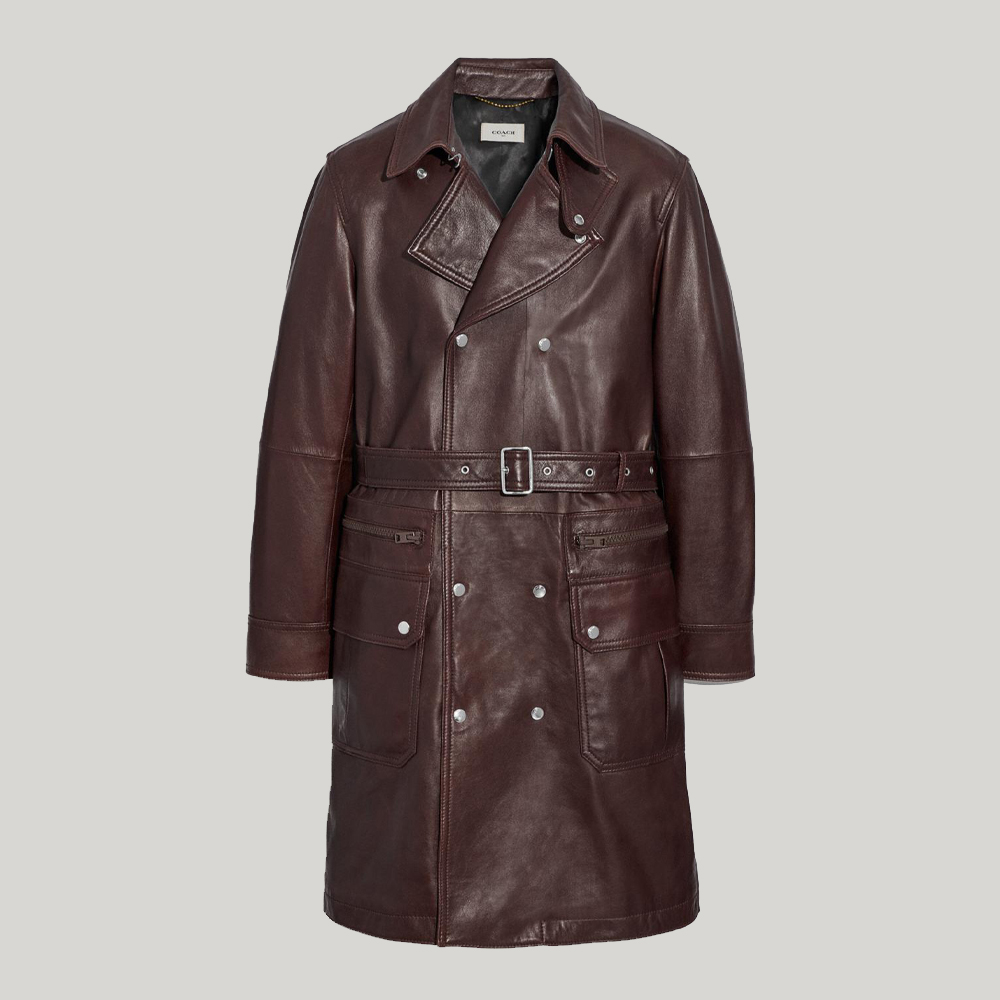 New York-based fashion house Coach is perhaps better known for its luxurious leather bags and accessories, but it also stocks a small range of ready-to-wear pieces, including a few trench coats. In true Coach fashion, leather makes an appearance, either as a material for subtle accents or to be used as the coat's entire basis. The company's Utility Trench even has a removable nylon vest for added warmth.
Shop Now 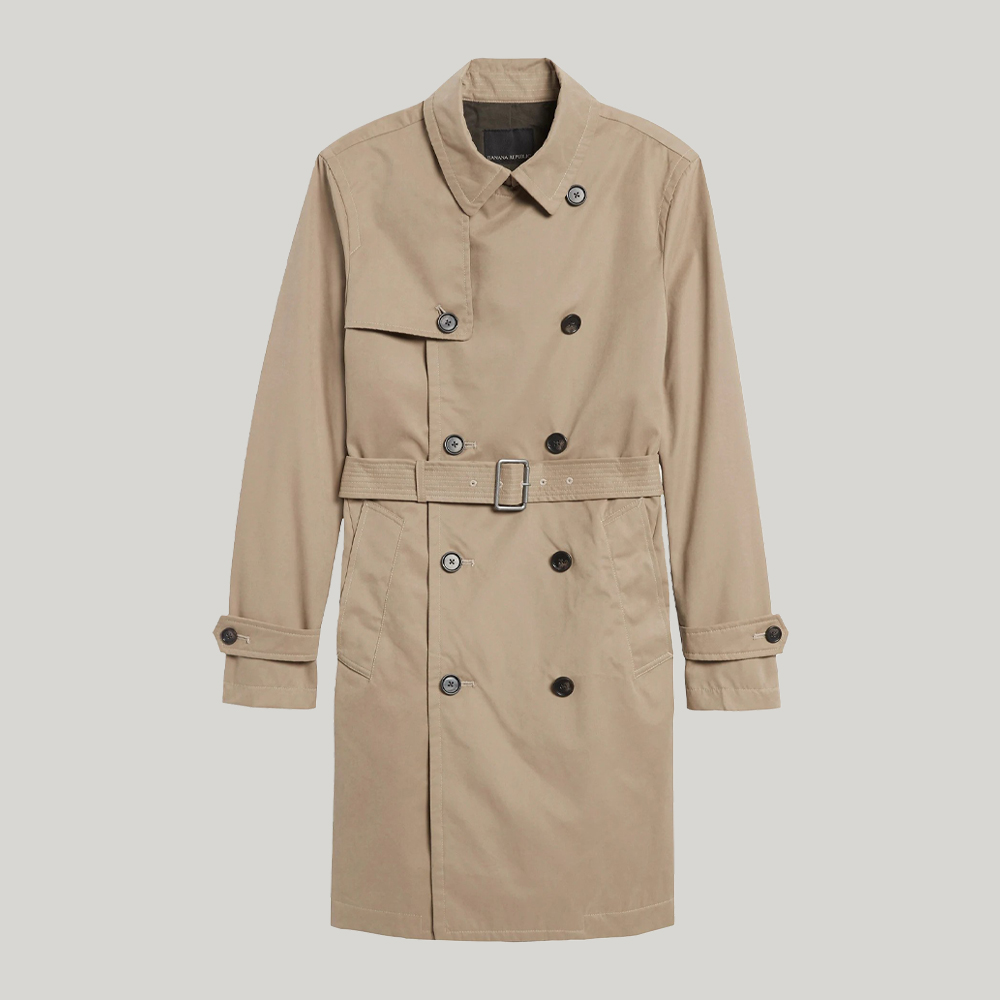 Banana Republic originally started life selling clothing that fitted around a safari theme. That branding has changed slightly since its founding some 40 years ago, but the outdoors is still an inspiration. A trench coat was always, therefore, going to feature in its catalogue. Banana Republic's take on the classic style includes the traditional elements, including a waterproof fabric, but adds a modern twist by dropping the shoulders. An above-the-knee cut only adds to its casual nature.
Shop Now 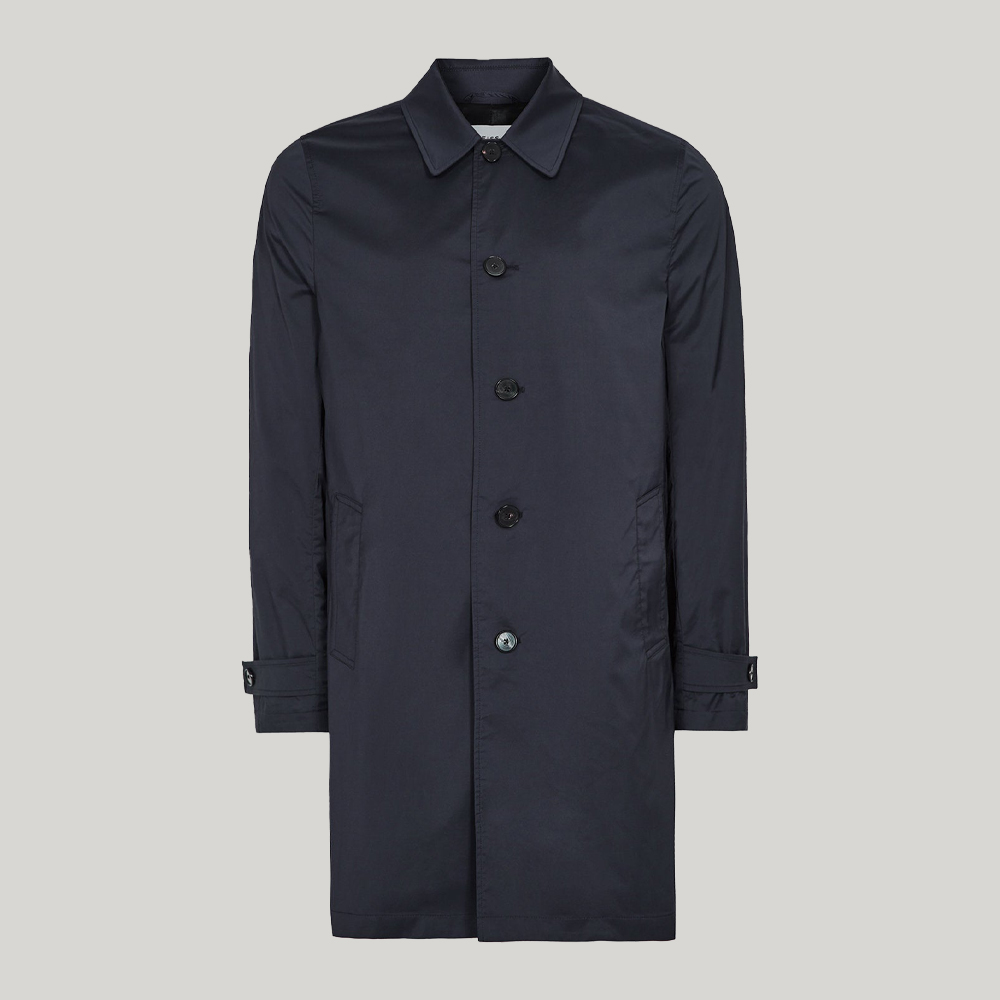 British fashion brand Reiss has also taken it upon itself to provide its own variation of the trench coat, and that variation, for now it seems, veers more into the world of mac jackets. As we mentioned in the opening text, trench coats and macs are technically different. And despite claiming them to be trench coats, Reiss' current catalogue is full of macs. But great macs they are, being made from water-repellent fabrics and coming in classic navy and grey colourways.
Shop Now 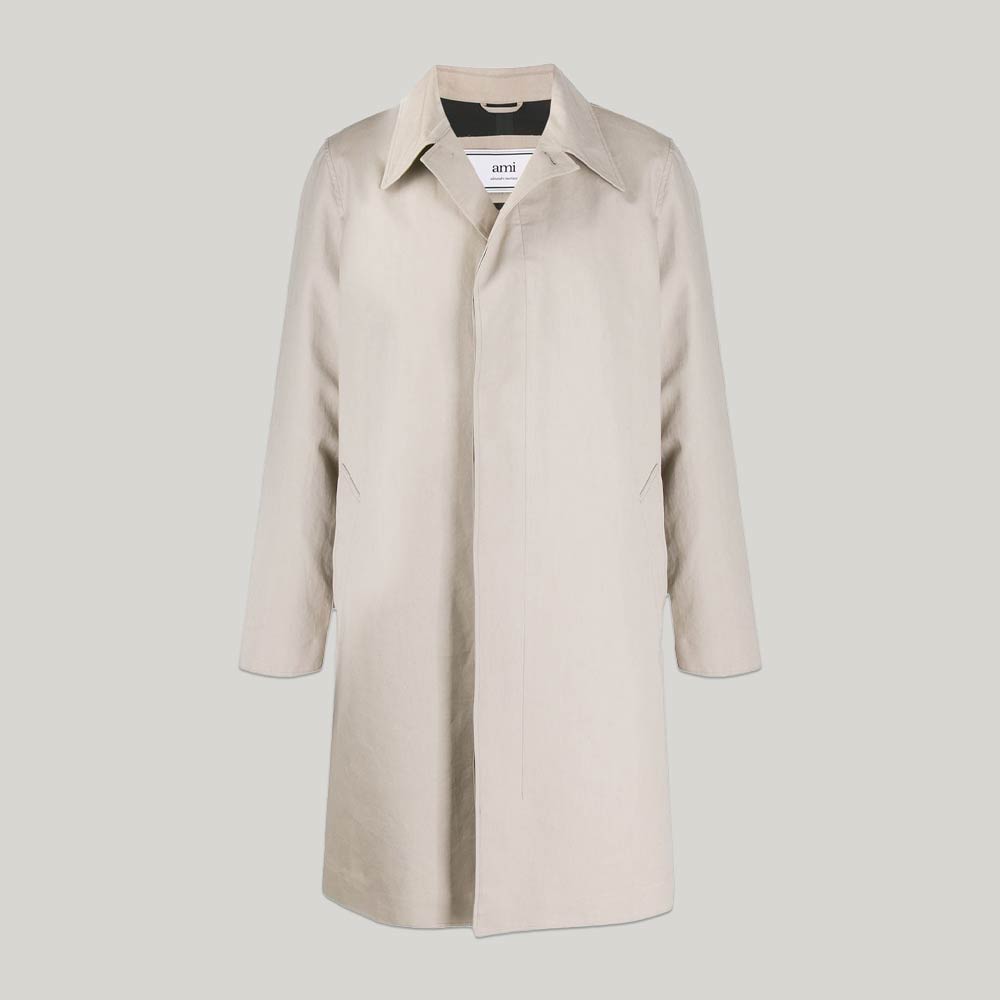 Founded in 2011 by then 31-year-old Alexandre Mattiussi, Parisian brand AMI has, and always will be, inspired by its city of birth. The brand seamlessly blends street and sportswear collection alongside more smart and formal offerings, with its trench and Mac coats sitting somewhere in the middle. Minimalist yet functional, they're a suitably stylish wardrobe upgrade.
Shop Now 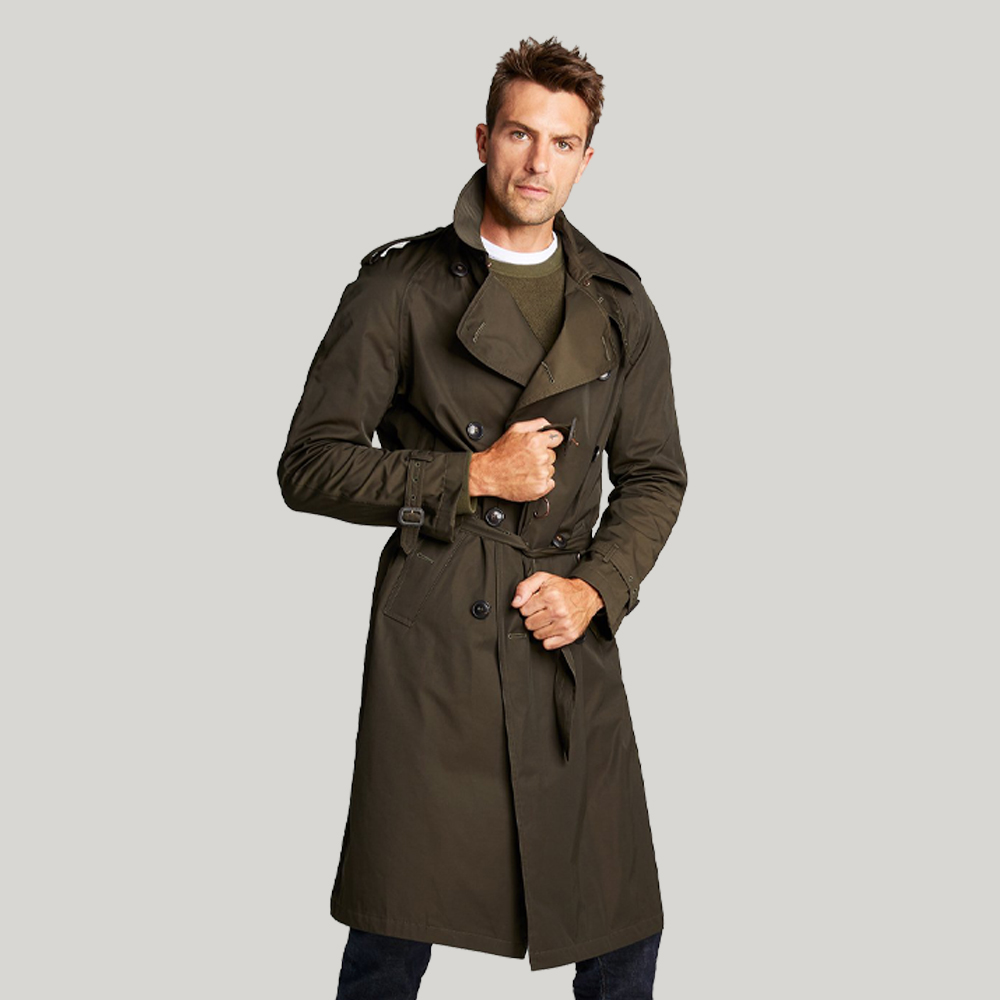 American menswear designer and former employee of Ralph Lauren, Todd Snyder certainly knows how to make a guy look good. We reckon it's practically impossible to not look great in his trench coat, made in collaboration with Private White. Constructed from a water-repellent Poly Cotton Twill fabric to keep rain away, along with copper accents straight from Swiss brand RiRi, Todd Snyder's trench is made to last and offer ultimate protection.
Shop Now 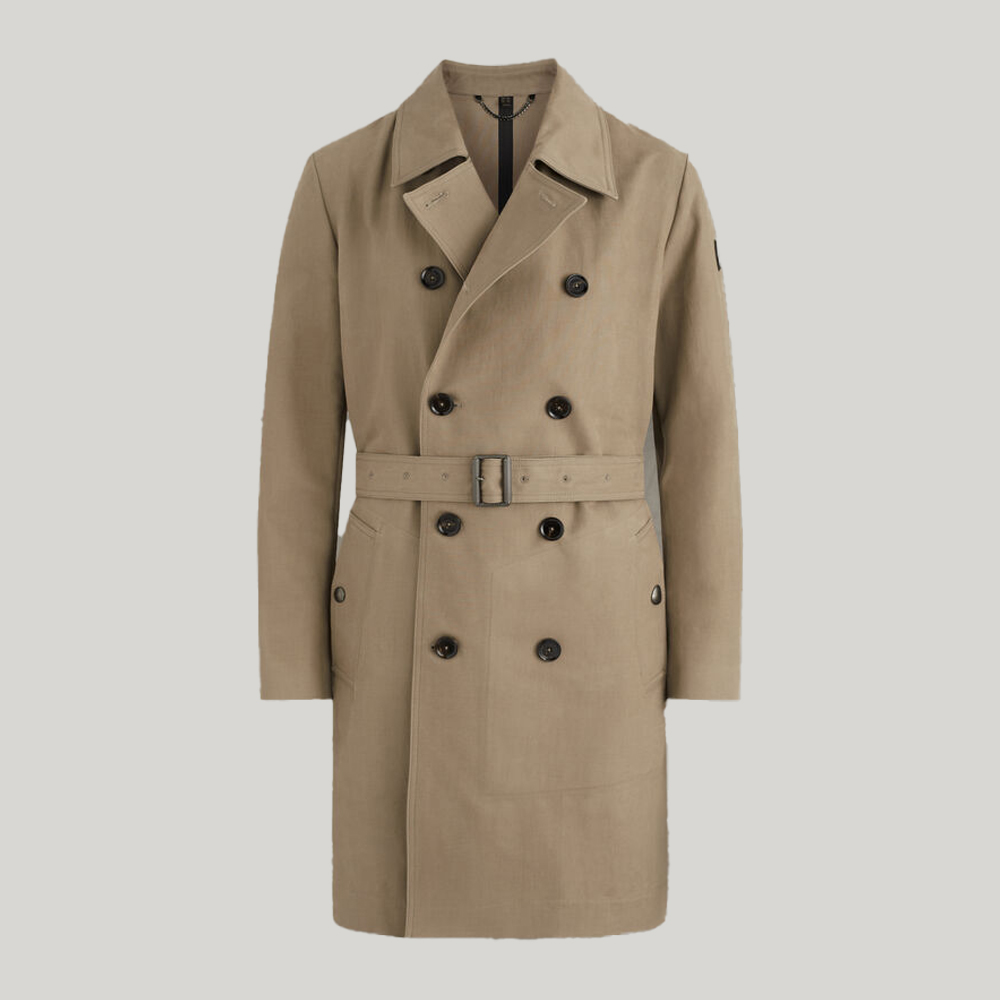 Belstaff is no stranger to outerwear. The British label is well-known for its leather jackets (usually found on the back of one David Beckham) but it also has a fine selection of trench (style) coats to buy, too. For absolute authenticity, the Garrison Trench is the one to go for. It rocks the classic 8-button double breasted design, a fully seam-sealed construction and a vented back to help regulate airflow. It's a versatile number that will wear well throughout the year, no matter the season.
Shop Now 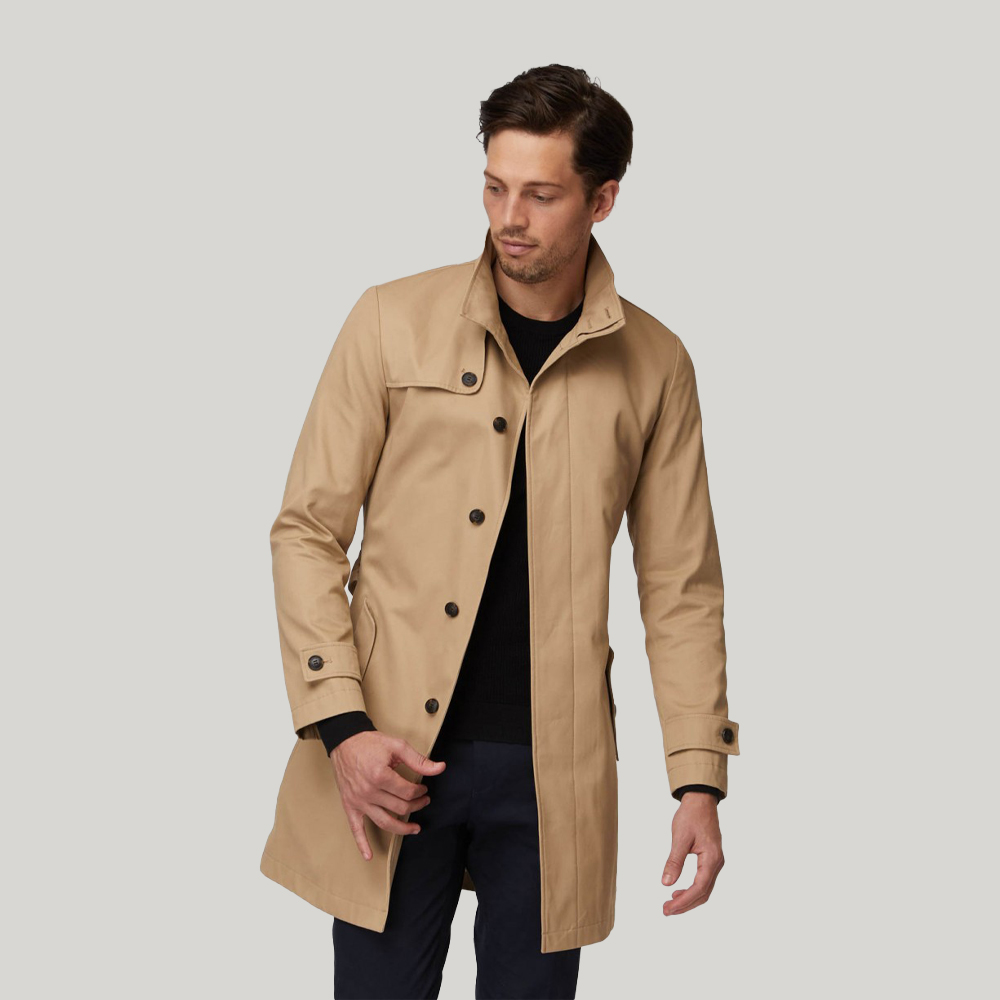 No, this isn't another British brand. In fact, Jack London hails from Melbourne, Australia, but is a brand that caters for the dapper gent, with European-inspired sartorial being the main inspiration. It is, however, another brand that doesn't have a trench coat per se, but the Bristol coat is a fine alternative. Rocking a belted waist and six-button fastening (single-breasted) it bears a striking resemblance to its distant relative. The classic taupe colouring is always a winner and a high neck helps to protect your neck from the winter chill.
Shop Now