Some have said Sydney lacks the hip accommodations found in other major international hubs, but we’d wager these best Sydney hotels beg to differ.

In one corner, we have the sophisticated standard-bearers that continue to pamper guests in five-star style. In the other, we have a band of boutique, trailblazing hotels opening new urban escapes for discerning jetsetters to call home.

Next time your travels take you to Sydney, check out (and check into) the best hotels in Sydney according to us… because we’ve stayed at them.

In this Sydney accommodation story… 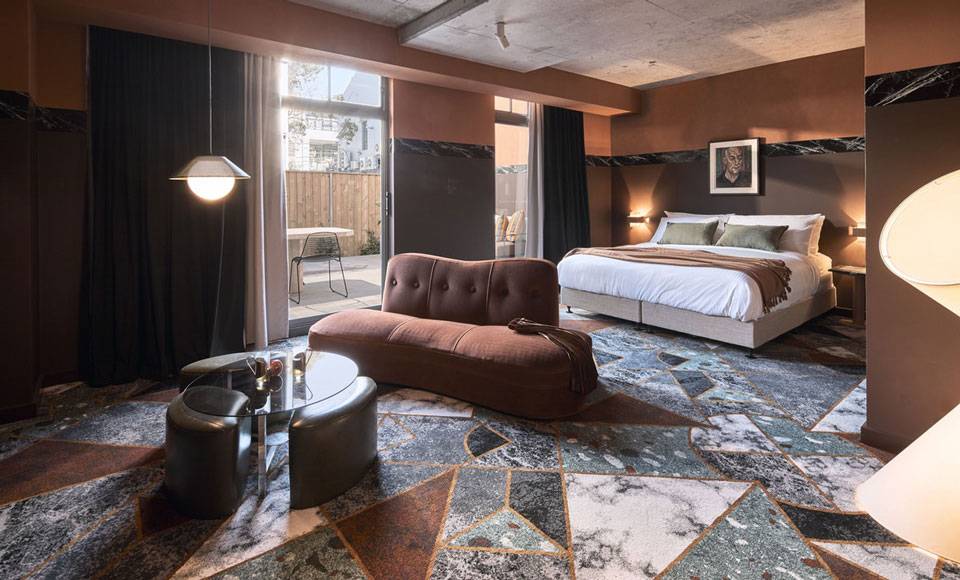 No normal hotel, The Collectionist is less a group of rooms and more a selection of canvases. Located between Newtown and Glebe, close to Sydney Uni, this hotel is a must-stay for anyone looking to soak up Sydney’s inner city buzz and/or embrace their alter-ego hipster. Start off your  weekend with some fresh produce from Paddy’s market, before reclining into the evening in the most ‘happening’ place in Sydney.

While you stay here you’ll be surrounded with entertainment options, from catching a show at the Enmore Theatre to tuning up your eye for the abstract at Carriegeworks’ artists hub.

“One of these hotels that I spent there like no one else. It was a very unique experience, with all of its pros and cons.”

Once a sticky-floored sanctuary in which to drown your after work sorrows or share a schooner or two, the Old Clare Hotel is a world away from its days as a pub and brewery. A recent revamp, courtesy of hotelier Loh Lik Peng and architects Tonkin Zulaikha Greer, has transformed the two heritage-listed buildings into a creative, playful and luxurious urban hideaway worthy of the emerging Chippendale arts and culture scene.

Old Clare is a DMARGE favourite and one of the best hotels in Sydney.

“They provided us with the best recommendations, from fine dining to finding the best street side pot pies.”

There’s nothing quite like an iconic Sydney view, and Pier One delivers the goods with a prime location alongside the Harbour Bridge. Natural light, contemporary art and Federation-style touches create a welcoming and stylish atmosphere for a romantic weekend or a business trip.

Even dogs are welcome, and those who wish to pamper their pup can opt for a minibar loaded with dog-friendly snacks.

“Had the pleasure of a short stay and was actually blown away by the stellar staff, delicious food and very comfortable bed.”

A warehouse in a former life, the 31-room Establishment Hotel is now an exceedingly stylish destination with an earthy-chic vibe (and luxe Bulgari bathroom amenities).

You’ll find this uber-cool spot in the heart of Sydney’s buzzing business district, delivering easy access to Sydney Harbour, the Opera House and the Royal Botanic Garden. But with three restaurants, three bars, a nightclub and a private gym, you may never want to leave.

The InterContinental Group breathed new life into an old Sydney establishment with the opening of the InterContinental Sydney Double Bay. Once a Ritz-Carlton and a Sir Stamford, the hotel takes full advantage of its harbourside location in its latest iteration. The rooftop pool and bar are designed for unforgettable days soaking up the Southern Hemisphere sun, sipping cocktails and enjoying snacks from the all-day menu.

The best luxury hotel in Sydney

The Park Hyatt offers 155 spacious accommodations with private balconies, 24-hour butler service, and a day spa with a rooftop pool and sundeck. Dine at local-favourite restaurants The Dining Room and The Living Room, imbibe at the waterfront bar, and peruse commissioned works of art from renowned artists at The Gallery.

For a more exclusive experience, hire The Study and its impressive internal wine cellar for a private event or meeting.

“Beautiful rooms and food, and the perfect place to stay to travel to the theatre for a show.”

Believe it or not, this ode to Art Deco glamour was once home to the headquarters of the Sydney Water Board. Fortunately, it’s come a long way from its sewerage days, and now stands as one of the city’s most audaciously glam outposts.

The 200 guest suites that make up the QT Sydney have been carefully crafted within the historic Gowings and State Theatre buildings. Visitors are treated to a distinctive blend of gothic, art deco and Italian architecture, mixed with quirky and contemporary interior design.

Quirky meets glam meets heritage at Ovolo Woolloomooloo. The latest incarnation of Sydney’s historic Finger Wharf brings artsy aesthetics and a sense of humour to the harbour. Step inside and you’ll feel like you’re at the centre of an edgy NYC warehouse party with a touch of Australia’s effortless flair. Every aspect of the hotel embodies the Ovolo brand to a T: eclectic, energetic, youthful and cheeky, served with free wi-fi and a complimentary minibar.

Sydney welcomed Veriu Broadway to its hospitality scene in 2017. Following an $18 million conversion of a former textile warehouse, Veriu Broadway offers guests their choice of self-contained studios and one- and two-bedroom loft style apartments. Every room boasts wi-fi, a smartphone and a smart TV, with most also featuring a kitchen and laundry so they truly feel like home away from home. The hotel also offers complimentary bikes for exploring the neighbourhood.

The Swiss Grand Hotel underwent a makeover and name change in 2015, reopening its doors as part of the prestigious QT hotel group and rapidly becoming one of the best Eastern Suburb stays. The QT Bondi offers spacious rooms (for Sydney) designed with light woods and bright colours for 24/7 beach holiday vibes. It’s an appropriately laid-back, yet sophisticated, addition to the city’s most famous stretch of sand. 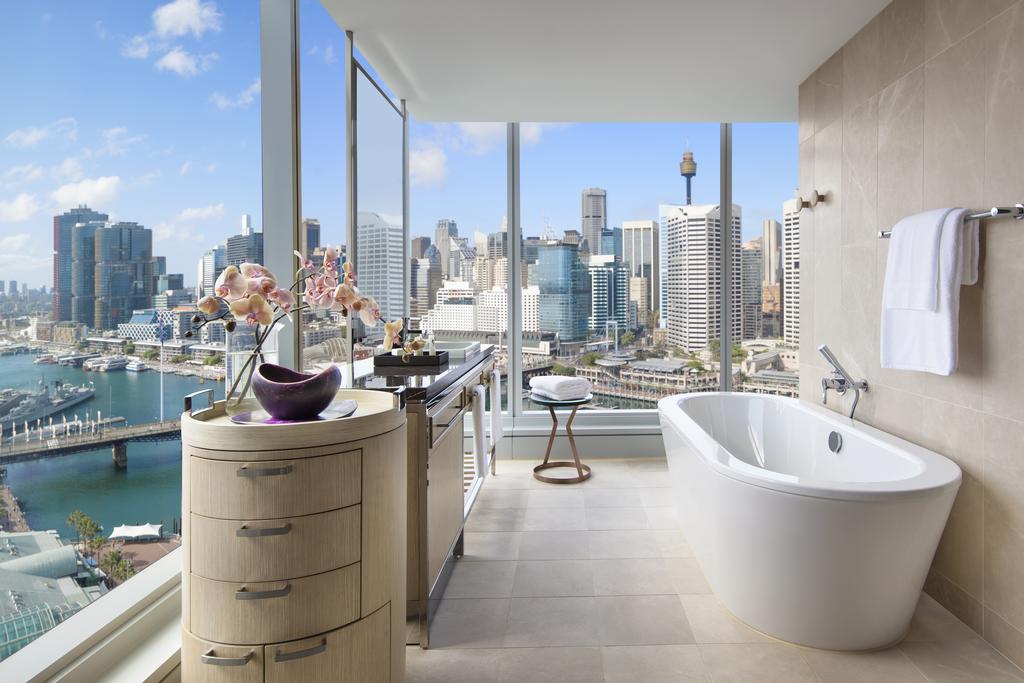 Meet the new go-to address for doing business in Sydney. The Sofitel Sydney Darling Harbour opened at the end of 2017 opposite the new International Convention Centre, becoming the first new-build five-star hotel to arrive in the city since it hosted the Olympics. Expectations are accordingly high, but with over 500 rooms exuding French elegance, a swanky Champagne Bar, the hotel chain’s signature restaurant Atelier, a rooftop infinity pool, and extensive meeting and event spaces, Sofitel shows nothing but promise.

The five-storey Hotel Palisade houses just eight rooms across its middle floors, sandwiched between a ground floor pub and a two-level rooftop bar.

The rooms have a tranquil feel with subtle nautical shades and marine murals by local artist Neill Mallard, and if you’re lucky enough to score a north-facing number, you’ll have spectacular views of the Sydney Harbour Bridge.

The Darling recently earned the prestigious Forbes five-star rating for the second year running in the publication’s annual list of the world’s best hotels, restaurants and spas. It’s merely the most recent in a string of accolades for the hotel, which calls itself a “cocktail of courtesy, charisma and charm” that “oozes glamorous individuality” and “epitomises the pinnacle of luxury.” The Darling won’t be winning any awards for humility, but it ticks nearly every box for an exemplary stay.

All signs point to West Hotel Sydney, part of the Curio Collection by Hilton, becoming a modern classic despite only opening its doors a few months ago. The hotel marries urban elegance with natural serenity, incorporating elements of Mother Nature in unexpected places.

A white waratah flower motif decorates the lobby and a floral-inspired carpet design graces the guest rooms. Modern Australian fare is the order of the day at Solander Dining, named after first fleet botanist Daniel Solander.

The highlight is an open-air garden atrium at the heart of the hotel, home to lush green foliage and a bar serving botanical-inspired cocktails.

It’s not cheap but then it is one of Sydney’s best new hotels, so it’s worth it.

“I always wondered what sets 6 star apart from 5 star. Now I know. “