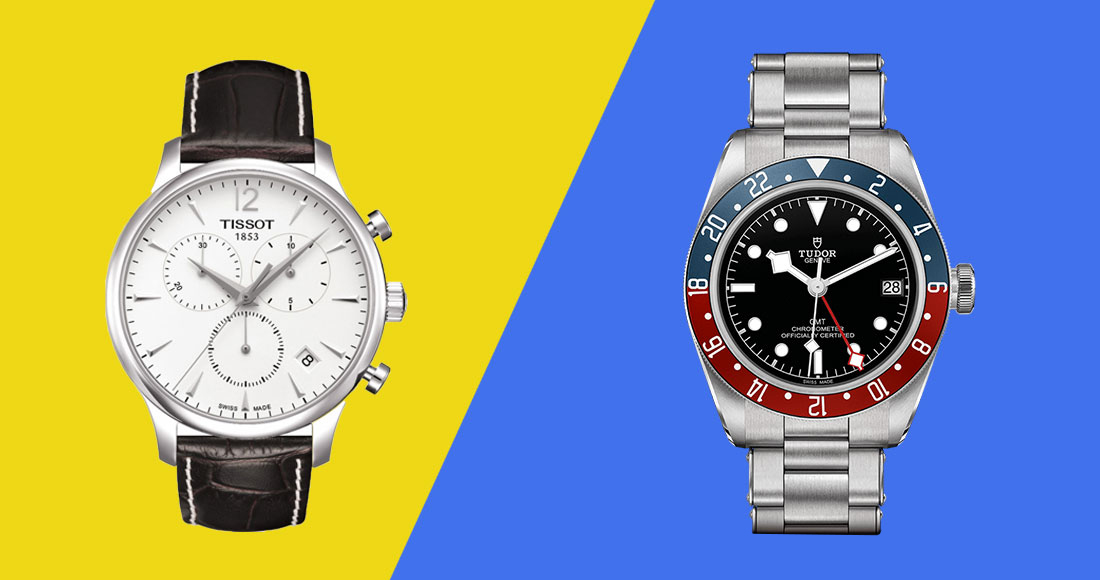 You’ve heard the reasoning: “Why would I pay for something that my phone can do for free?”

A justifiable point in today’s society, however we still wanted to delve a little further to educate readers on what goes into a timepiece costing $500 or $5,000. The idea is that you’ll be able to make your own sound decision on buying watches if you understand why one can cost ten times more than another.

And why $500 vs. $5,000? These two price points best represent the entry point for affordable and high end luxury watches. We’ve also tapped the Australian Financial Review‘s Watch Editor Bani McSpedden to help out with identifying some of the variances.

Pick up a watch around the $500 mark and you’ll usually notice a few consistencies:

Put simply, at the affordable end of the watch spectrum there are slight aesthetic differences in the material finishing.

“It can be materials, but the thing that accounts most for the difference in the prices is the finish of the watch. And it’s probably a bit more noticeable the more expensive the watch,” explains McSpedden.

“The finishing, quality of materials and treatments like non-reflective glass on a crystal, that kind of thing will add to the final price of a watch.”

Experts say that you may also find differences in watch straps when it comes to these two price points. At $500 you could be getting a stamped calf leather strap as opposed to genuine alligator leather – a minor but noticeable feel of quality.

Once prices hit the $4,000 – $5,000 mark, customers can expect to find things like deployant buckles and more intricate finishings used throughout the piece.

One of the most contentious areas of watch pricing is the manufacturing methods employed for a watch and its movement.

Whilst McSpedden believes that “there’s been no correlation between accuracy and the price for a long time,” other experts swear by the extra precision that often commands a bigger price tag.

Based on the latter’s observations, here’s what you can expect for a watch in the region of $500:

The general consensus is that the simpler the movement is to manufacture and finish, the cheaper it’ll be. A mechanical watch takes more time and labour to produce due to its complex mechanical movements that requires a person to assemble. Some parts can be way too delicate for a machine to replicate.

“There’s very little price difference in the movement in Quartz watches,” McSpedden explains. “They’re using a module and that module is not the most expensive thing.”

Believe it or not, the design of a watch plays little into the final cost of a watch whether it be $500 or $5,000. That’s according to McSpedden who strongly questions the correlation between design and price.

“I don’t think it plays into the cost. If you’re talking about a well-designed watch, for many they would say a sub-$200 Daniel Wellington watch is ‘well designed’ because it’s not overly ornate or overly glossy. In fact, its simplicity is what defines it.”

“You would say the same thing for a German-made Nomos Glashütte at $5,000. Again, the clean design is similar but I don’t think it accounts for much with the price.”

Whilst this may be true for minimalist style timepieces, there are some noticeable differences between more elaborately designed watches at these price segments. This of course links back to manufacturing processes rather than the design phase it stems from.

Lower priced watches at $500 can yield:

McSpedden makes a good point when he says that what you’re really paying for today in a watch is a piece of art on the wrist.

“It’s no accident that prestigious brands cost more because brands can charge more for them. What we’re paying for is the worth of having that pleasure of something nice to look at.”

“The current watch business is a profitable enterprise and if you’re a well respected brand, you’ll be able to charge more for it.”

Whilst this maybe true for some high-end watchmakers, certain standards need to be met in order to sneak into the $5,000 mark.

This can come in the form of hand assembly and hand machining. Beyond the $5,000 mark is where the line between craftsmanship and brand reputation can blur. Brands can charge more for watches but the difference in quality between a $5,000 piece isn’t as obvious at first glance.

“Apart from at the high end, you can’t tell the difference from the finishing of the movement. Unless you’re looking at it from the back of the watch, that’s not something that you’re going to need to pay for.”

Watches From Both Camps

If you’ve gotten this far you should have an idea about what you want in a watch and how much you’re willing to fork out.

It’s no coincidence that some of the best value watches around the $500 mark are also the ones produced in large quantities.

RELATED: Freshest Men’s Watches You Can Get For Under $500

In the $5,000 segment you can expect to see watchmakers like:

RELATED: Freshest Men’s Watches You Can Get For Under $10,000