I’ve had the pleasure of owning a few dogs that have been both best friends and amazing family companions. This got me thinking about what dog breeds are currently popular with men.

In no particular order, we found ten cool dog breeds that everyone’s talking about in 2022. We do however recommend that you choose a dog breed that suits your lifestyle, accommodation, and climate (not everyone’s going to be able to have a Husky).

How to choose your dog companion?

It is best to pick a dog whose characteristics best line up with your personality and lifestyle. If you spend little time at home, do not pick a breed that needs regular exercise or is known for loving companionship.

Which dog breeds are low maintenance?

All dogs need grooming but some need more than others. If you want a low-maintenance breed, better go for terriers or dachshunds. Their coats are sleek, carefree, and rarely shed hair.

Which dog breeds are easiest to train?

Some dog breeds can be more challenging to train. Usually, those that are bred to hunt alongside a man follow their instinct and impulses, like a German Shepherd or a Border Collie, are easiest to train.

Please also consider adopting your new best friend from The Lost Dogs Home or the RSPCA. 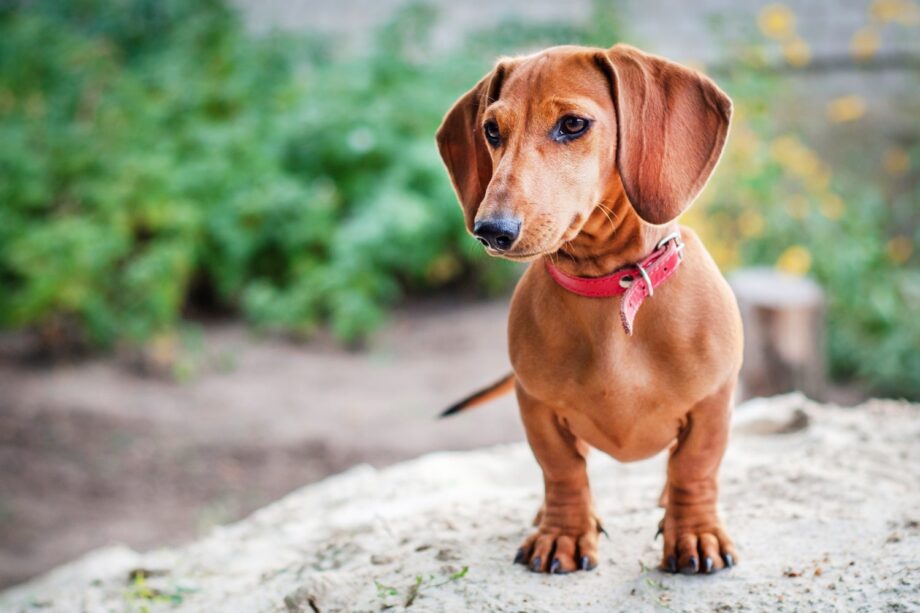 Some experts even believe that the Dachshund goes back to ancient Egypt, where similar dogs were featured in engravings and mummified in burial urns. Notable Dachshund owners include Andy Warhol and E.B. White. 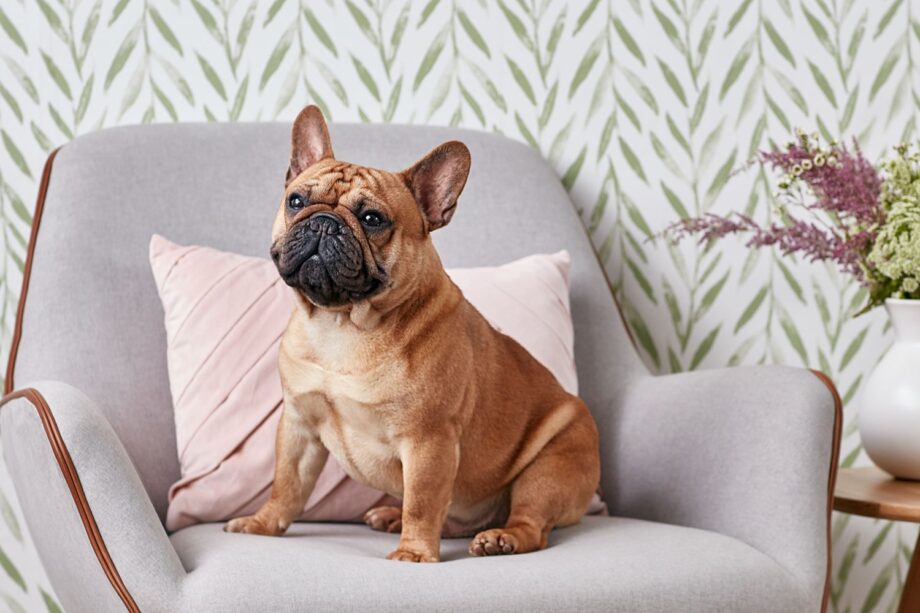 Frenchie fans are a fierce bunch. Few breeds inspire loyalty like the French Bulldog, which has won over legions of fans around the world (including the likes of David Beckham, Hugh Jackman, John Legend, and Jeremy Renner). French Bulldogs became popular in the 1800s, when they were introduced to France by English lace makers who were displaced by the Industrial Revolution.

They were considered a highly fashionable pet and were sought after by all, from high society ladies, to Parisian prostitutes, to artists, writers, and other creative types. 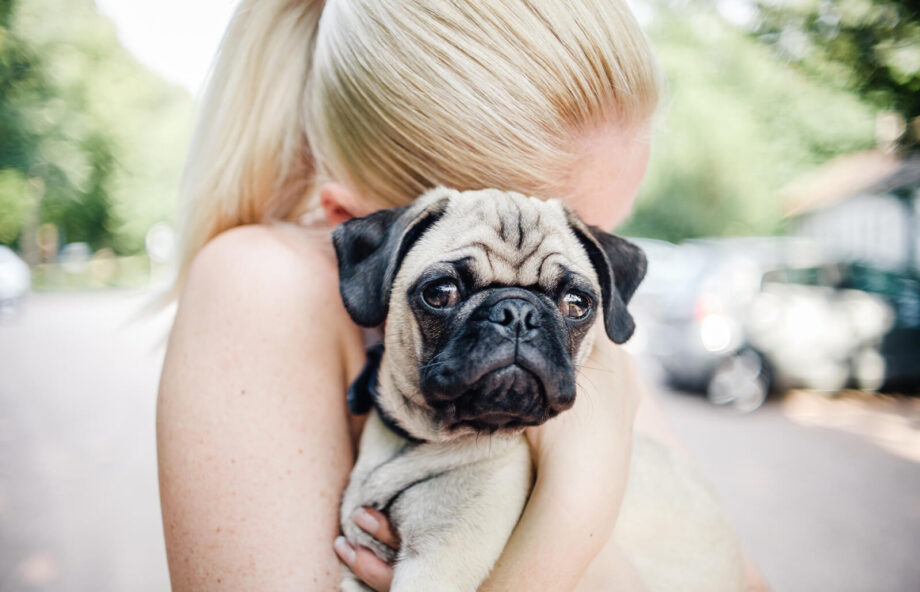 How could you possibly say no to that wrinkly little face? Believe it or not, the Pug has historically hobnobbed with members of society’s elite. After being imported from China to Europe by the Dutch East India Company in the 16th century, Pugs became a favorite of the House of Orange, William II and Mary II, Spanish artist Goya, English painter William Hogarth, Queen Victoria, and others.

These days the Pug prefers to mingle with Hollywood royalty, with starring roles in films like Men in Black, various fictional print media, and video games. 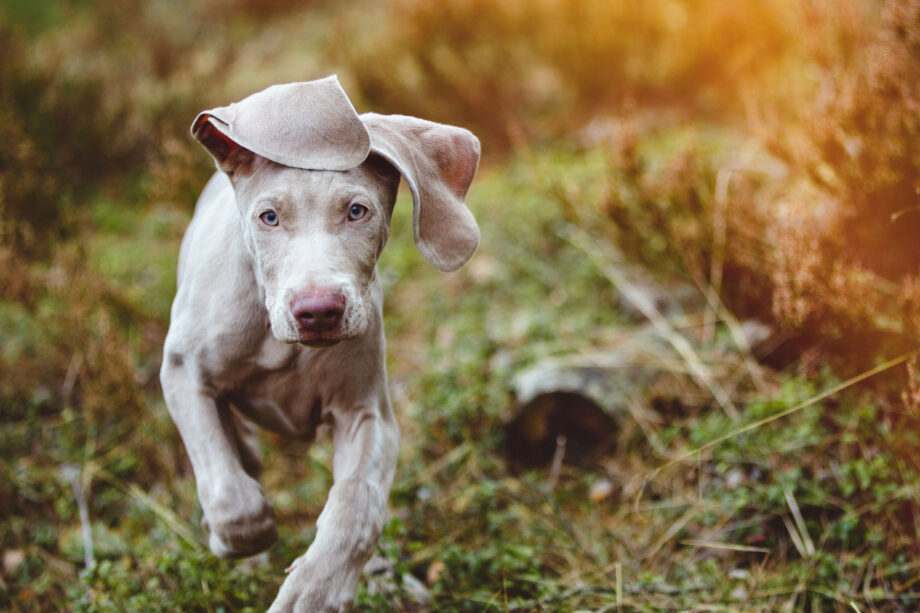 The Weimaraner was bred to be a noble-looking, reliable hunting dog exclusively for members of the higher classes. The name comes from the Grand Duke of Saxe-Weimar-Eisenach, Karl August, whose court, based in the city of Weimar, enjoyed hunting. The Weimaraner was so prized that, unlike other hunting dogs that were kept in kennels, the Weimaraner lived with the family.

Fun fact: two Weimaraners can be seen in the music video for “What’s My Age Again?” by pop-punk pioneers Blink-182. How’s that for a claim to fame? 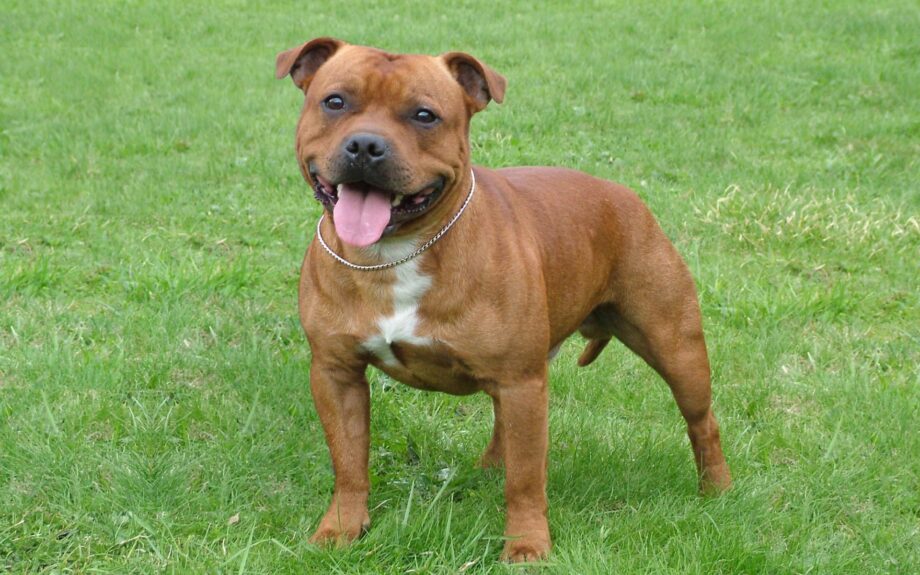 Also known as a Staffie, Stafford, Staffy, or Staff, the Staffordshire Bull Terrier is small but mighty. This little guy is descended from dog-fighting ancestors, making him a stocky and muscular breed that looks like a compact version of the Pit Bull. Early “proto-staffords” participated in bloodsports like bull baiting, bear baiting, and fights with other animals, and were prized for the quality of pluckiness or “gameness.”

Bloodsports are long gone, but the Staffordshire Bull Terrier is still a winner; intelligent, fearless, loyal, affectionate with humans, and relatively easy to train. 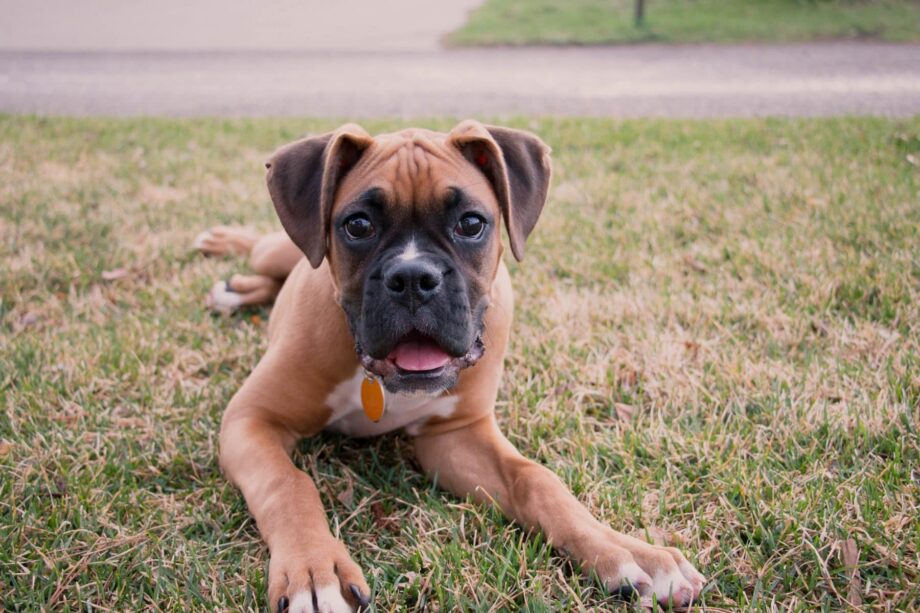 If you’re looking for big and badass, the Boxer might be the dog for you. The Boxer is a stocky, medium-sized, short-haired dog bred in Germany from the Old English Bulldog and the Bullenbeisser, a breed that’s now extinct. The breed is so badass, in fact, that it was used for military work during World War I and introduced to the general public by returning soldiers after World War II.

The name “Boxer” is supposedly derived from the breed’s tendency to play by standing on its hind legs and “boxing” with its front paws which, frankly, sounds too adorable to miss out on. 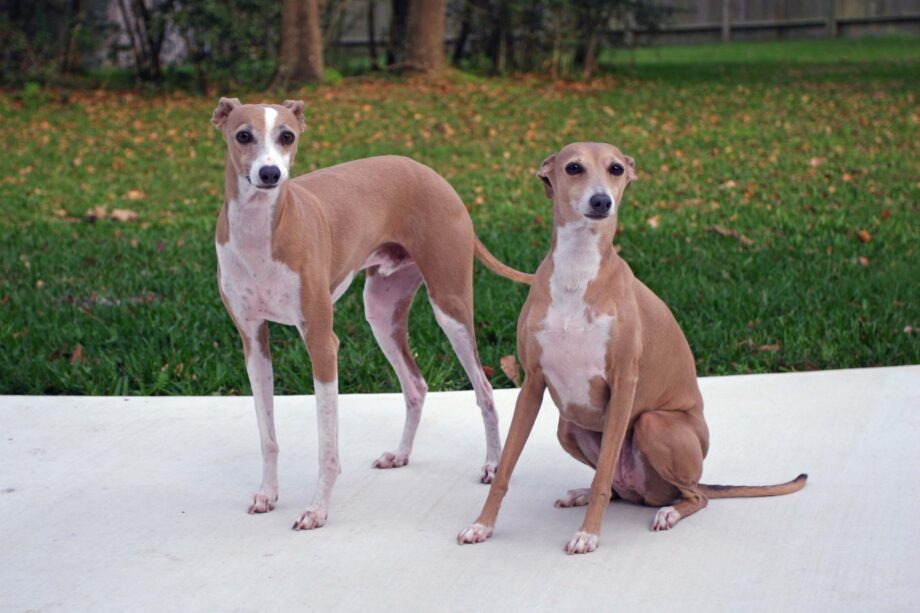 There’s something so loveable about those spindly little legs, and the incredible amount of power they pack. The name of the Italian Greyhound is a reference to the breed’s popularity in Renaissance Italy, where they were probably the only accepted companion dog. Pictorials of small Greyhounds have been found in Pompeii, and their ancestors were reportedly seen in Emperor Nero’s court in the first century AD. 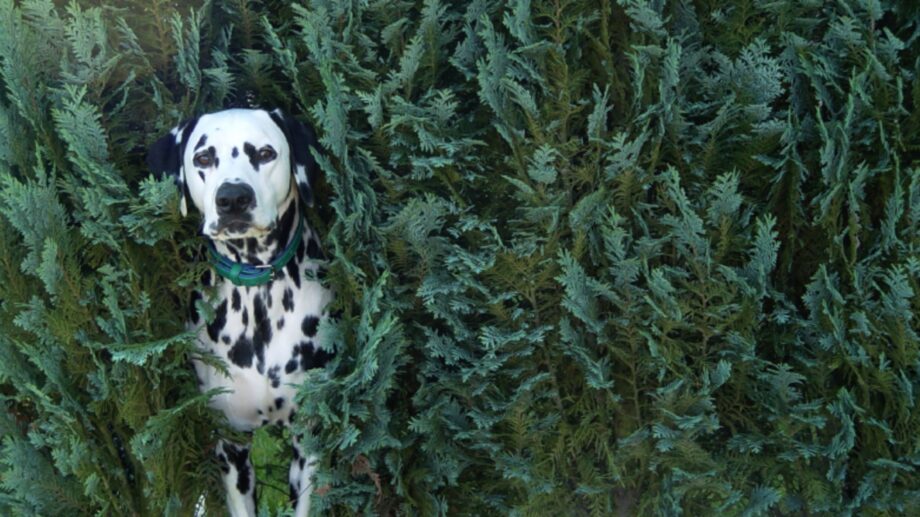 Let’s skip the obvious 101 Dalmatians joke and get straight to the heart of things. The Dalmatian’s roots can be traced back to the historical region of Dalmatia in Croatia, where the first illustrations of the breed have been found. Then, it was used as a guard dog and a companion to the nomads of Dalmatia. Now, the Dalmatian is often used as a rescue dog, guardian, athletic partner, family pet, and fire dog.

Dalmatians also have a strong hunting instinct and have been used as bird dogs, trail hounds, retrievers, or in packs for boar or stag hunting. They’ve even made appearances in the circus. 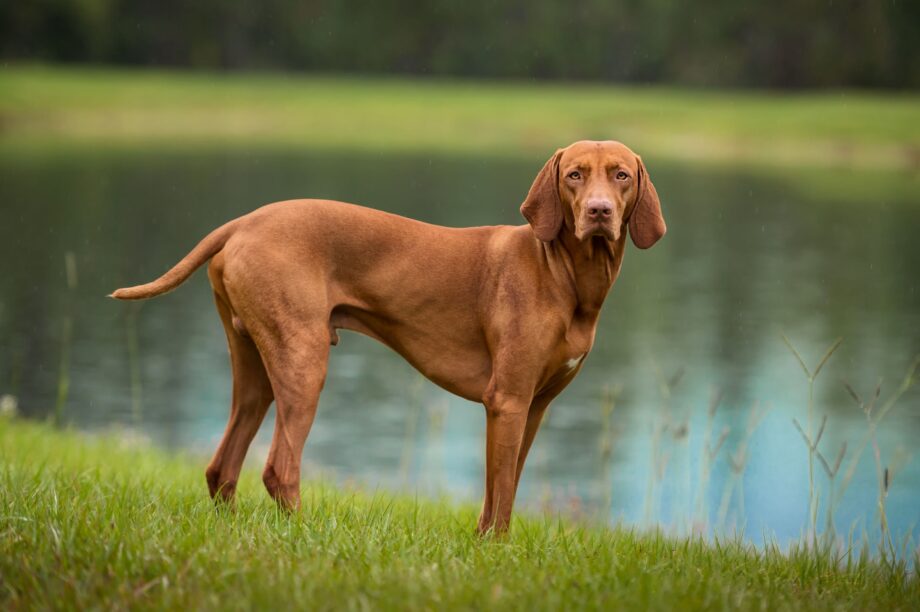 The Vizsla is a Hungarian hunting breed with an impressive nose, outstanding trainability, and a distinctive rust-coloured coat. The breed survived the Turkish Occupation, the Hungarian Revolution, WWI, WWII, the Russian Occupation, and several near-extinctions in their history to rise to prominence once again.

In addition to its hunting skills and beautiful appearance, it’s the temperament that really makes the Vizsla stand out: the breed is gentle, loyal, affectionate, and friendly with family and strangers alike. They are even sometimes referred to as “velcro dogs” because of their devotion to their owners. 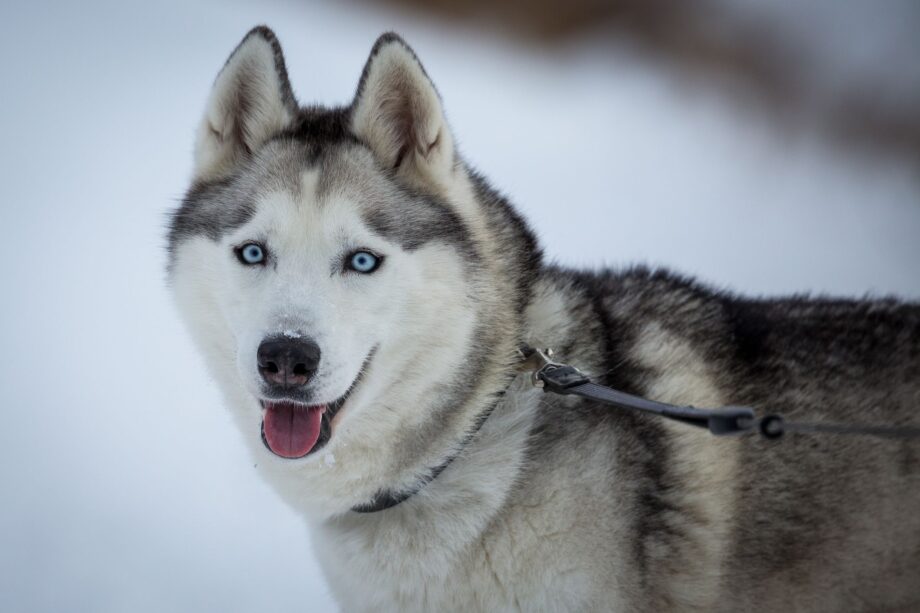 Who hasn’t wanted one of these at one point or another? The Siberian Husky is an active and resilient breed that originated in the extremely harsh, cold environment of the Siberian Arctic. They were bred to pull heavy loads across long distances in difficult conditions (sometimes up to 40 miles per day!), which made them ideal to be used as sled dogs when they became popular outside of Siberia.

The Siberian Husky is highly intelligent, making them a great choice for obedience trials, but also making them consummate escape artists and earning them a reputation for opening refrigerators and helping themselves to the contents.