Dogs are man’s best friend. And we all need a friend right now in 2020, when the state of the world is enough to make anyone feel lonely and sad.

It seems as if many Aussies are on the same wavelength, too. Not only have dog adoptions dramatically increased since the start of the coronavirus pandemic, but now prices for puppies from breeders are absolutely skyrocketing – particularly those for ‘designer’ dog breeds, ABC News reports.

‘Designer dogs’ are nothing new: while dogs have been crossbred for centuries in order to develop new breeds or produce desired traits, a particular trend that started in the 90s was to crossbreed poodles with other dog breeds in order to take advantage of the hypoallergenic qualities of its fur with other traits from other breeds. Labradoodles and the like are incredibly common household pets in Australia – where there’s more than one dog for every seven people.

According to Australian Dog Lover, the most popular dog breed in Australia is a ‘designer dog’ breed: the Cavoodle (a cross between a Cavalier King Charles Spaniel and a Poodle). Other designer dog breeds also feature in their list of top 10 breeds. They’re particularly popular with families, although it seems as if 2020’s puppy craze is being led by singles or couples instead.

Before the pandemic you could normally expect to spend anywhere from a few hundred bucks for an ‘oodle’ from a pet store to something in the low thousands for a puppy from a breeder, but 2020 has seen demand soar. Breeders around the country are now selling designer dog puppies for upwards of $10,000. DMARGE was able to find a seller in Port Macquarie, NSW selling ‘miniature Golden Bordoodle’ puppies for $7,500 each – as of publishing, all these little cuties have sold out. 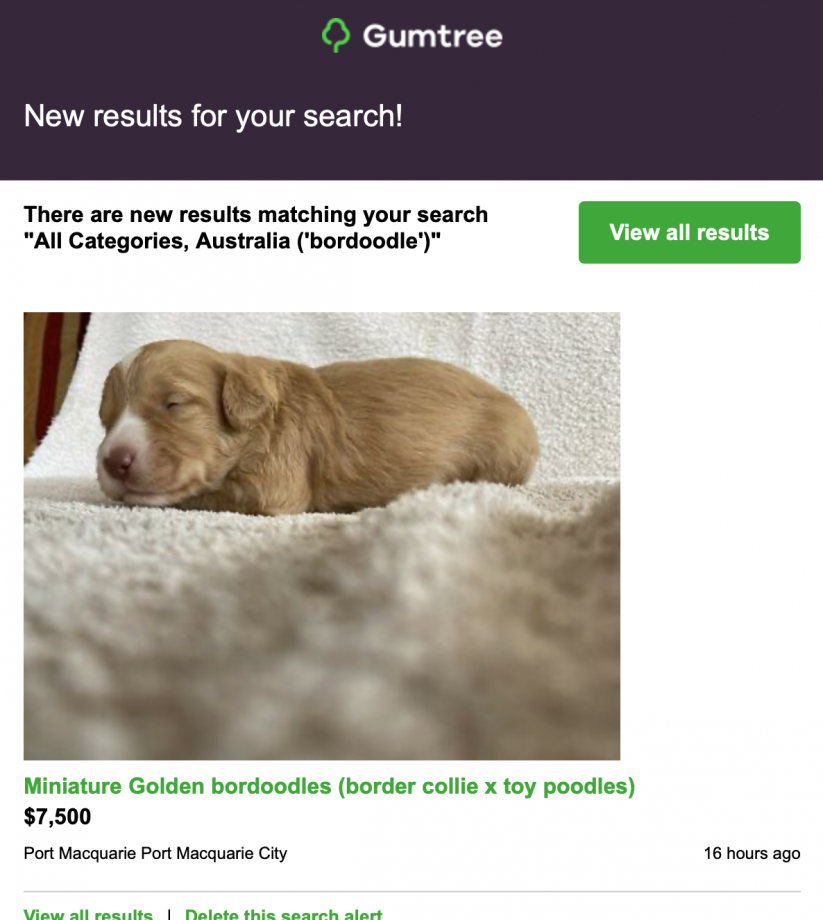 But the issue that’s really concerning here isn’t whether Australians are getting ripped off by these insane puppy prices, it’s whether or not this demand is driven by good intentions – or people just looking for a ‘quick fix’ for loneliness and boredom during social distancing restrictions. Will people abandon their puppies once we’re allowed to go back outside again, or will they keep their furry friends for the long haul?

A relatively recent case study was sparked by the 1996 live-action remake of Disney’s classic canine film 101 Dalmatians. The film’s success spurred a huge spike in demand for Dalmatian puppies, which many owners subsequently gave up for adoption after realising that ‘a dog’s not just for Christmas’. Many Dalmatians were euthanised, outraging animal rights groups. It was a particularly cruel phenomenon – puppies bred to meet fleeting demand only to end up having their lives cut short thanks to human hubris.

“Our surrender stats this year have fallen across the board in comparison to last year, which is promising to see thus far. It is possible surrender stats may rise when people return to work fulltime, but RSPCA NSW will always be there with our doors open to help any animal in need… currently we have seen a decrease in surrenders.”

“It is important for people to make sure the pet they are bringing into their household is right for them now and into the future,” Watson relates.

“All puppies and kittens are cute when they are little, but they might grow into large energetic animals that will need a lot of attention and care. Please make sure you know where your animal is coming from, which can be ensured by visiting the property where the dog is housed to see its living conditions, potentially meeting the mother and father if possible to see if there are any health concerns, and asking for any medical or vaccination records. It is important to also factor in that desexing, microchipping, vaccinations, and other medical assessments may not be part of the price so you might be up for additional costs in the near future.”

Now excuse me – I need to go home and feed my Shiba Inu.