Brogues have stepped a long, long way from the Scottish hills in which they used to frolic. Perfectly perforated, the OG wet-weather farm shoes have evolved into something more. For starters, the punch-hole design is now worn for decorative purposes – not draining water away from the marshes as it once did. In fact, it is this patterned detailing that makes brogues what they are today. And it’s exactly why they’re loved by many a stylish shoe maven.

However, brogues are often overlooked by the modern gent: yes, they are more casual than formal dress shoes, and are a touch more show-y too. But, there are so many types of brogues on the market, from traditional shoemakers to luxury brands, that there’s definitely a brogue out there for you.

Making the brogue en vogue again, here’s why you should consider brogues as your next shoe purchase, how to wear them, and where to get the best ones. They aren’t all equal.

What Is A ‘Brogue’ 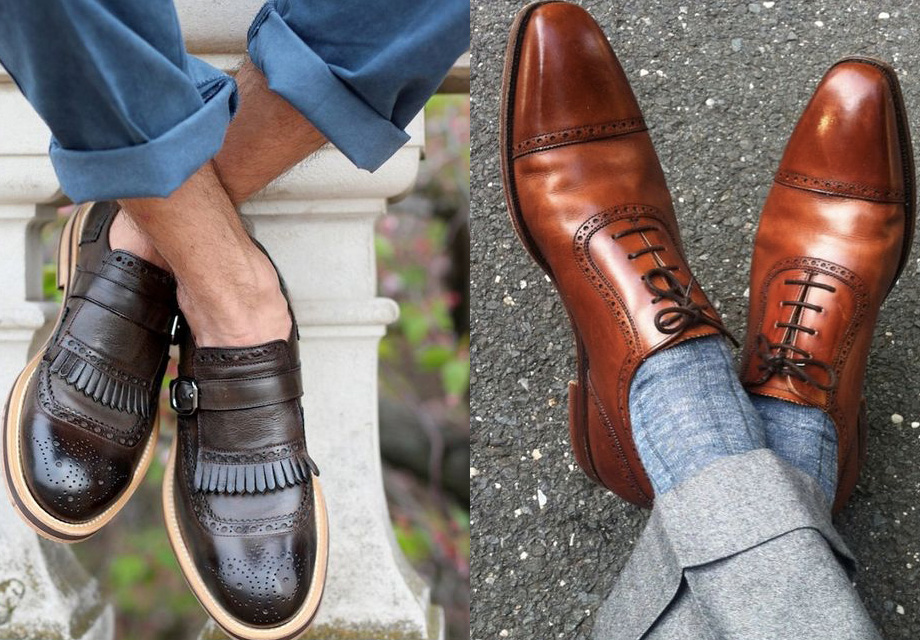 Before we start talking the benefits of brogues or how to wear them, we tapped Nick Schaerf, co-founder of men’s luxury shoe store, Double Monk, to clear the sartorial air regarding the brogue.

“A brogue is distinguished by a pattern of holes punched in the leather uppers of the shoe,” says Schaerf. “Most of the punching – known as broguing – appears along the seams of the shoe, although some brogues also have a punched motif on the toe, known as a ‘medallion’.

Where To Wear Brogues

There’s no ‘strictly speaking’ when talking brogues and the shoe forms they take. Today, brogues come as Oxford or Derby shoes, boots, loafers and even monk shoes, both single or double strap.

“Generally, you will find that lace up shoes or boots are more commonly brogued than monks or loafers,” says Schaerf. “This is because broguing is traditionally a country thing – originally brogues were designed for walking through the wet Scottish countryside and the holes went right through the leather so that water could escape – so it is usually found on walking shoes.”

Lately too, brogues have even taken on sneaker soles for a take on comfort that is looks dressier.

How To Spot A Quality Brogue Shoe 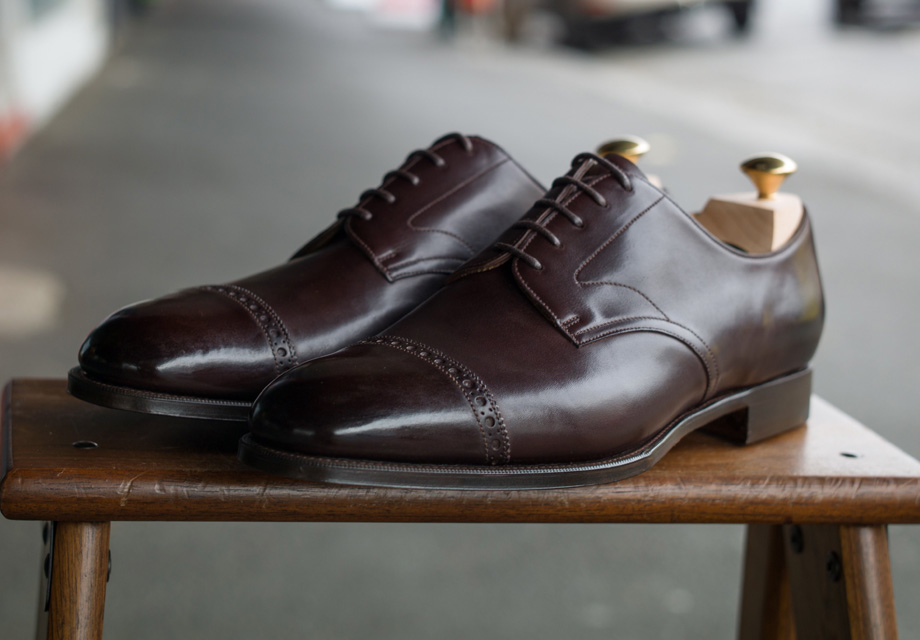 Just like any other leather dress shoe, stick to full-grain leather. “This means that the full thickness of the leather has been used, and that the top surface of the leather is untouched,” says Shaerf. “You should be able to discern the fine grain of pores on the surface.”

Other construction must-haves pertain to the shoe lining and sole/heel. “You want the shoes to be lined with leather and have either a leather sole with a stacked leather heel, or a high quality rubber sole such as a Dainite or Ridgeway sole,” adds Shaerf.

Finally, the sole should be made using the Goodyear welting construction method.

As mentioned earlier, not all brogues are the same. Mr Schaerf was kind enough to break down each type. Learn how to speak brogue, below.

Full or wingtipis the style with the most broguing. Every seam is brogued, including the characteristic ‘m’ shaped ‘wingtip’ seam at the vamp of the shoe. The wingtip brogue always has a punched toe medallion.

A longwing is a wingtip brogue where the wingtip continues right to the back of the shoe instead of angling down towards the sole. They have no toe cap patterning either, just edge perforations. It is a classic American style.

On a quarter brogue only the toe cap seam is brogued. This is basically a straight cap oxford, so it is a pretty formal shoe, and is actually a favourite of many London bankers.

The spectator is a two tone brogue, usually a wingtip with the toe, heel and lacing in a dark colour and the rest of the shoe in a contrasting lighter tone. This was a classic style in the 1930s and 40s, where it was considered debonair and rakish: you wouldn’t want your daughter going out with a fellow in spectators.

How To Wear & Style Brogues

Brogues with denim is one of our favourite combinations. Take a slim pair of blue or raw denim jeans, pair them with brown, black or blue brogues and you have a winner. You can wear them with or without socks. Roll the cuff to add some personal style to your look. 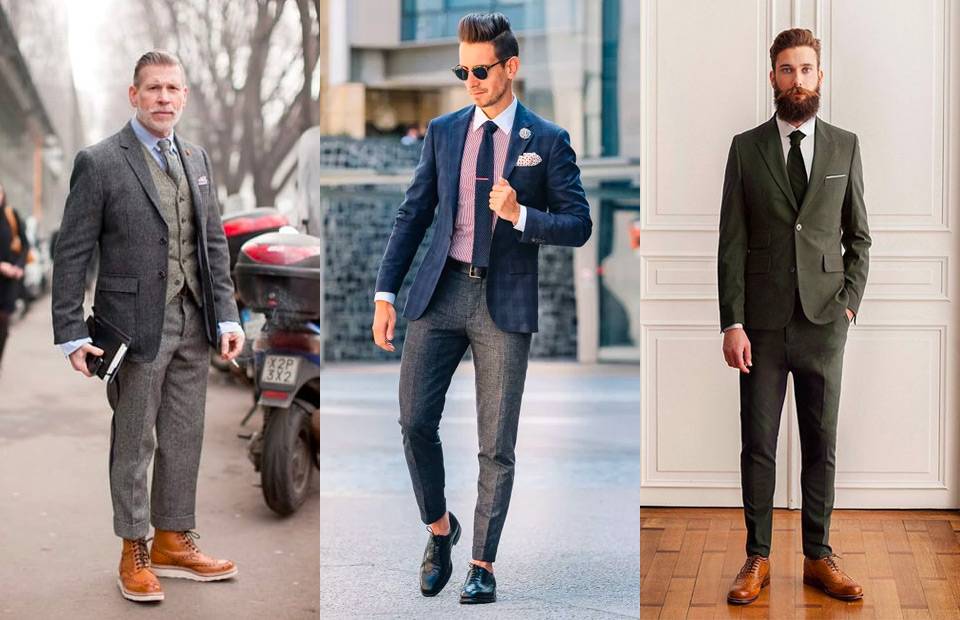 A very gentlemanly way of wearing brogues is to pair them with your suit. Brogue boots and shoes will both work nicely. Once again, socks or no socks is acceptable. 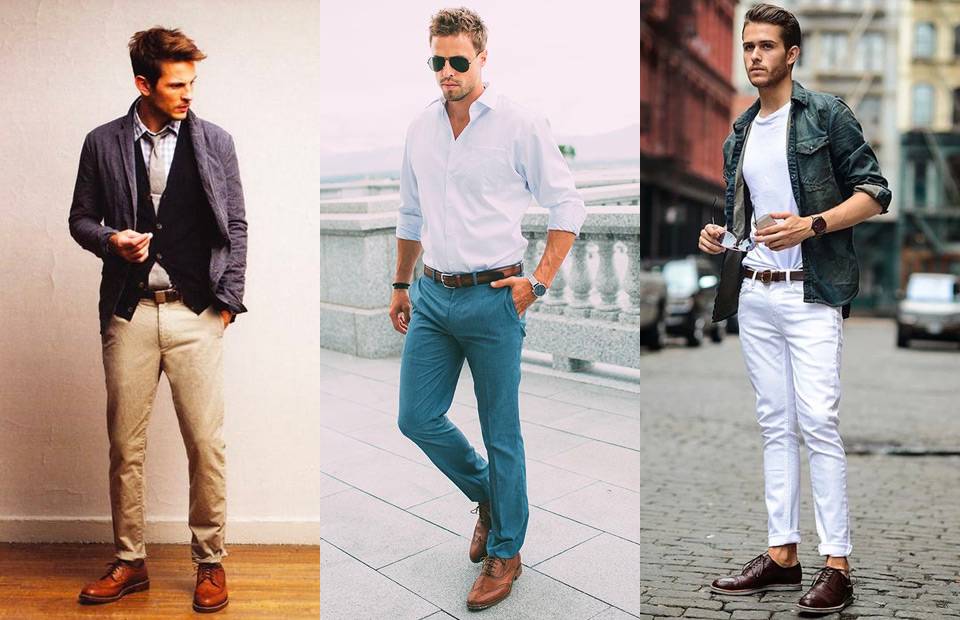 A smart casual essential is the brogue and chino combination. White, blue, khaki and even purple chinos will all work nicely with a pair of brown brogues. 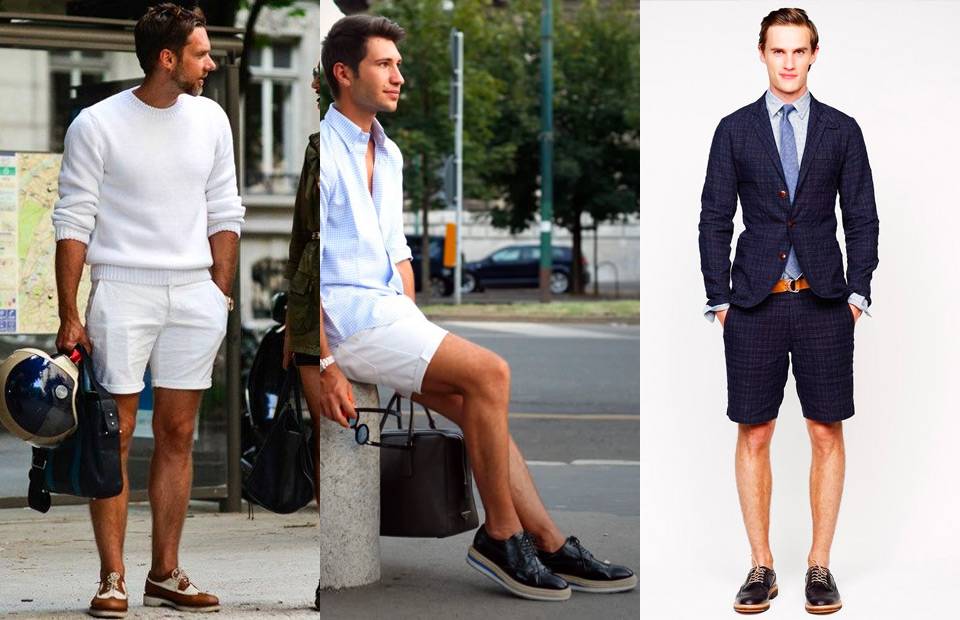 Lastly a killer combo for the warmer months is brogues and shorts. Ditch the socks and go for shorts just above or below the knee. Pair the look with knitwear, shirts and even a blazer. This is a great look if you’re heading to the polo.

While brogues will replace the common leather dress shoes in any given outfit, Shaerf says there are certain brogues that go better with specific dress codes, social settings and even certain trousers or pants.

For the work suit, look to either a quarter, half or full brogue. But that depends on the colour. “For example you could get away with a light-coloured quarter brogue, but not necessarily a wingtip brogue in the same colour. A monk is a classic style option that ticks the formal box too.”

For a formal suit keep the shoe colour classic and brogueing minimal. “Look to black quarter brogues with a mirror shine on the toe and heel.”

Settings where the casual suit shines, allow for the capabilities of the brogue to shine too. “Spectators are a great statement shoe, so they would look superb at events like the races or a summer wedding.”

Smart casual jaunts where a simple blazer and jeans combo is called for allows for more brogueing, and even some texture. “A semi brogue, and perhaps in suede. The advantage of the semi brogue is that it’s not too formal, but nor does it have the overtly country look of the wingtip.”

What makes a shoe a brogue?

A pair of shoes is considered a brogue if it has decorative perforations (called broguing), as well as serration along the visible edges. Brogue shoes have uppers that are made of multiple pieces of leather.

In the past, brogues are considered an outdoor shoe and not acceptable for formal occasions. Today, you can wear brogues with business attire and other formal wear.

How to choose brogue shoes?

Full-grain leather brogues are the best. Choose a pair with a leather sole with stacked leather heels. Rubber sole is also good, but make sure it is good quality like a Ridgeway or Dainite. 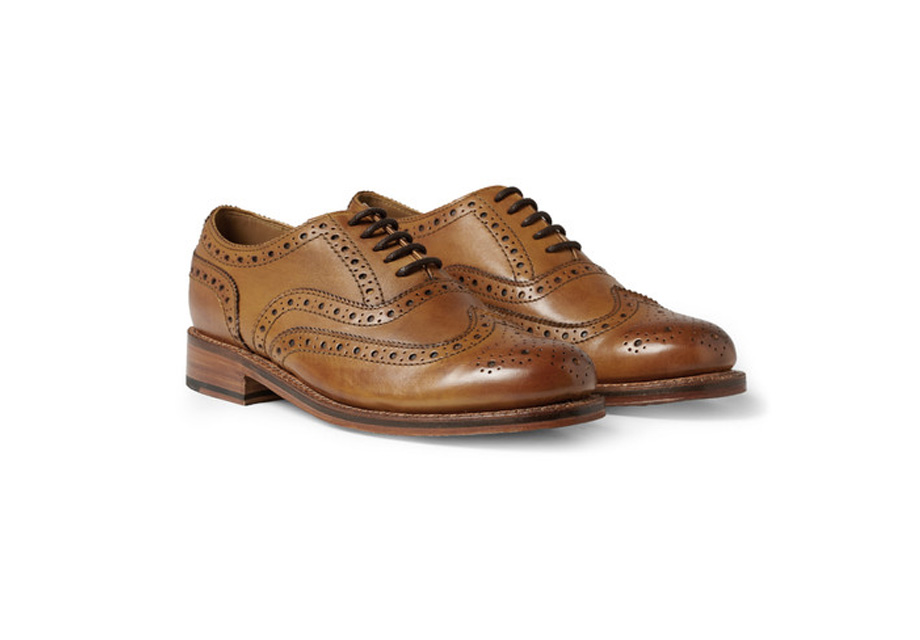 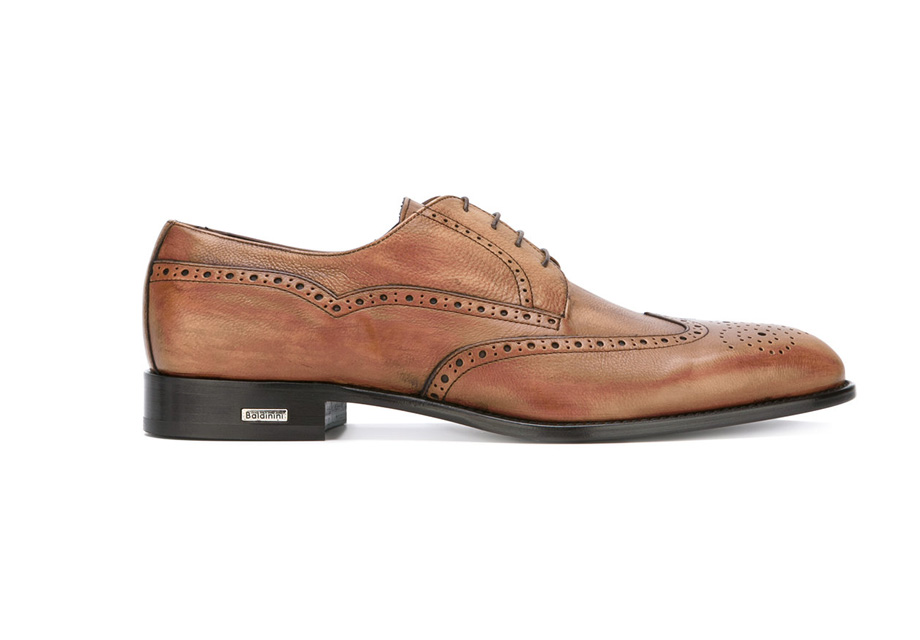 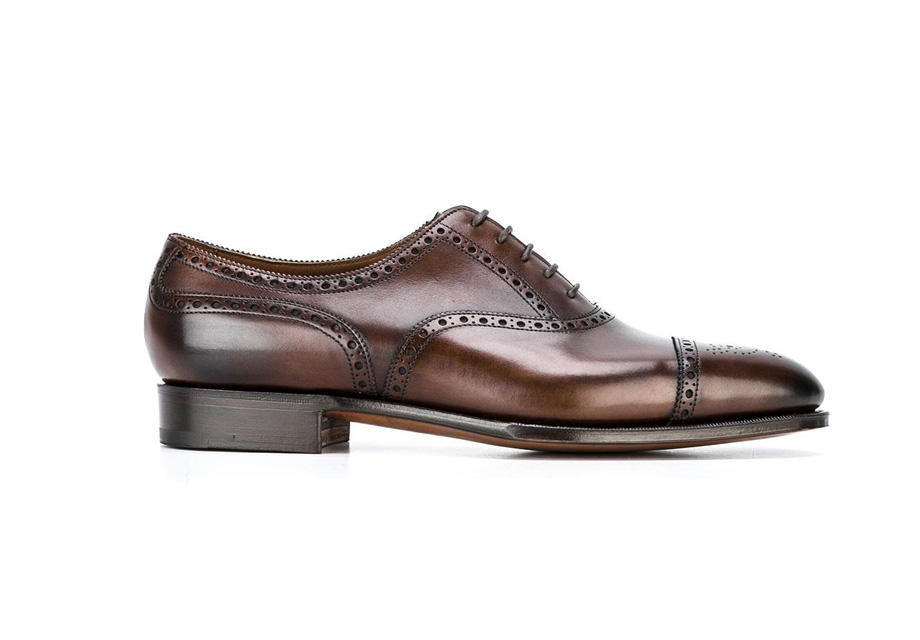 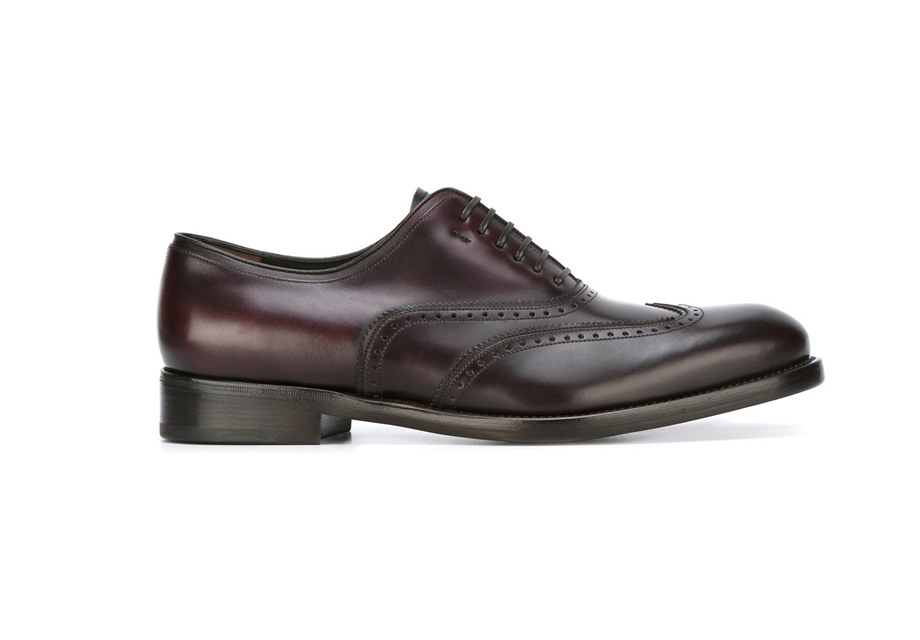 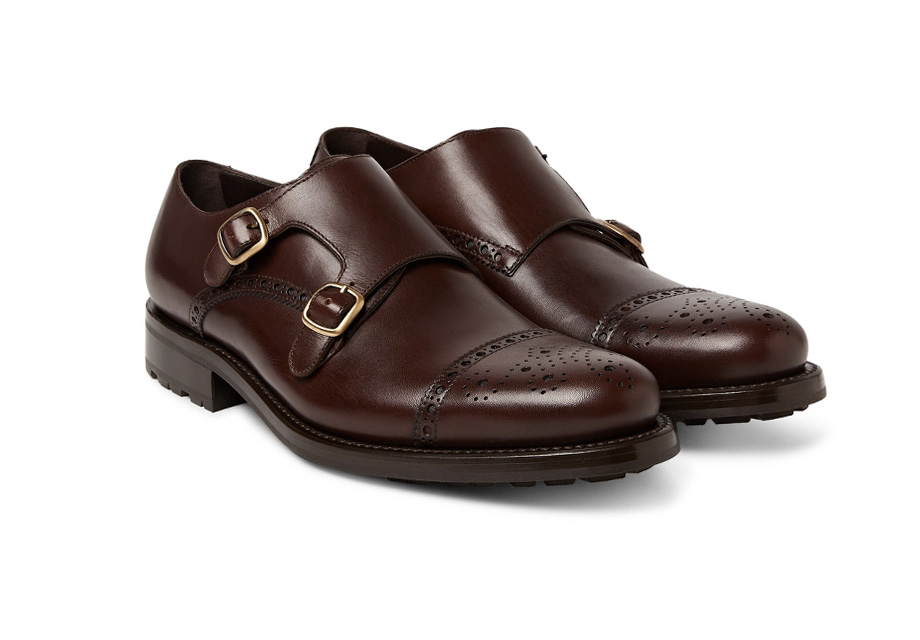 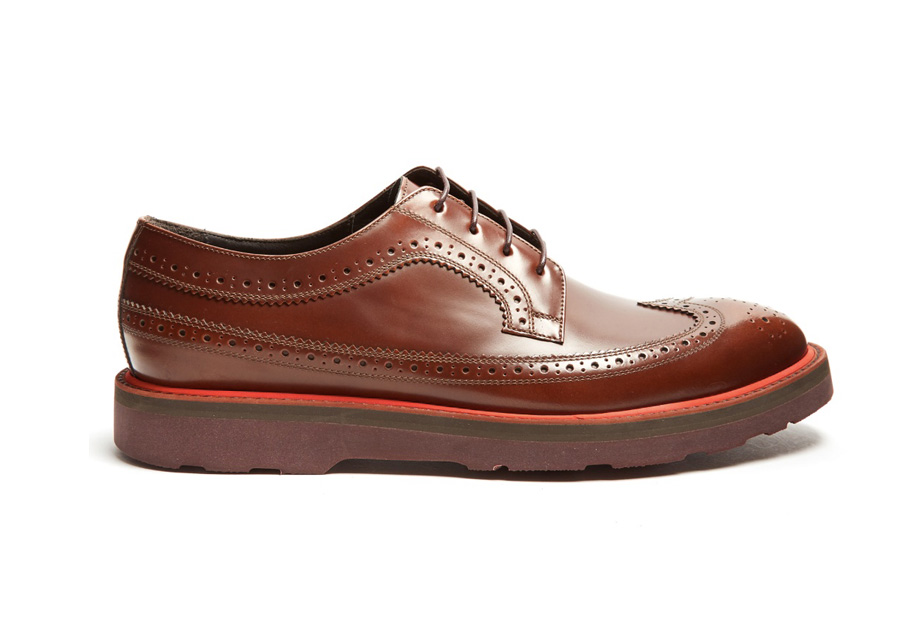 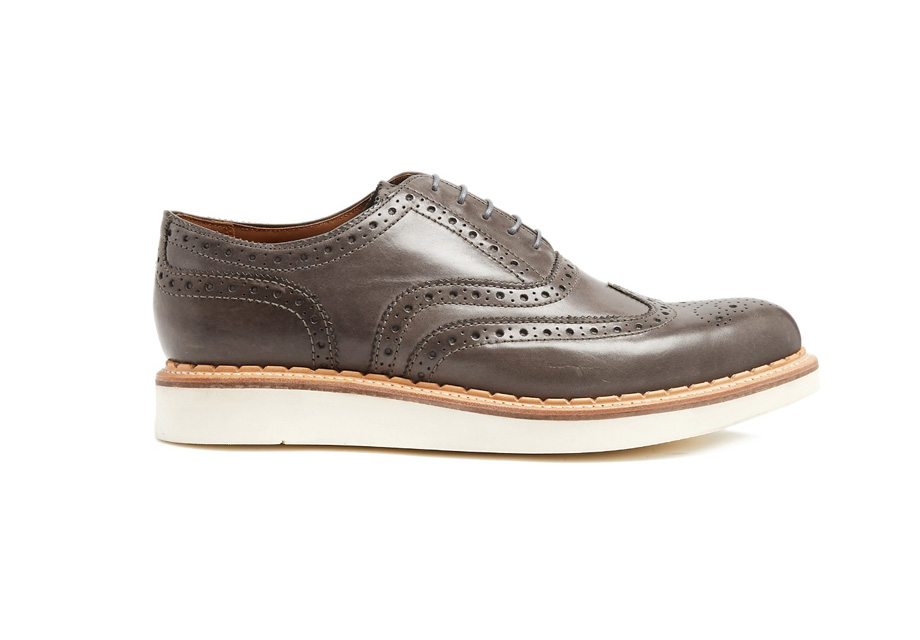 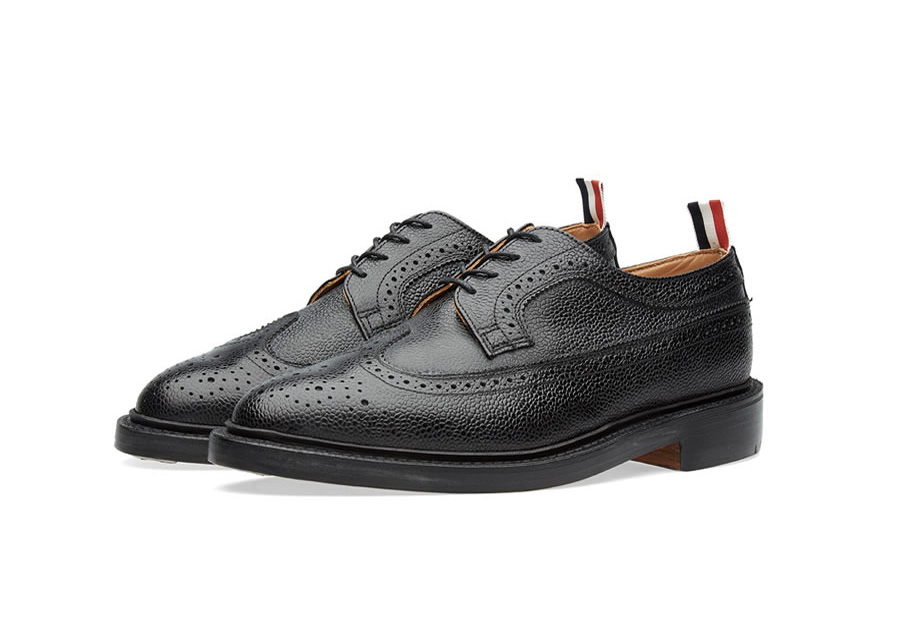 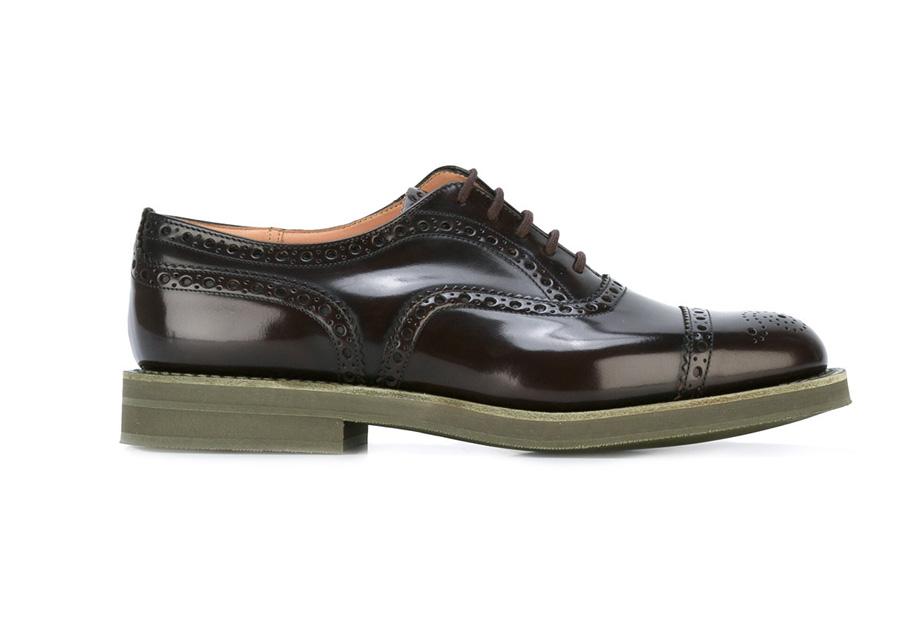 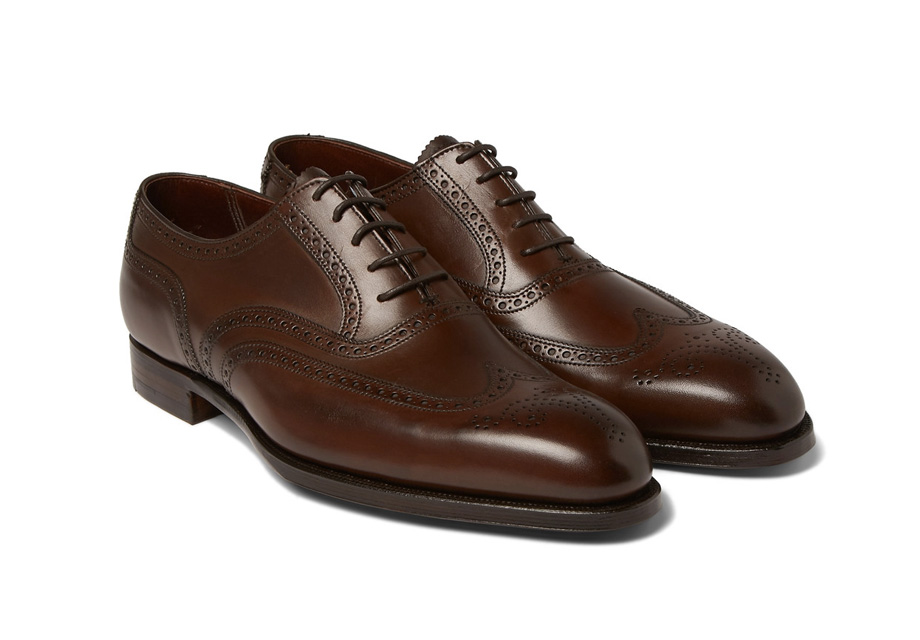 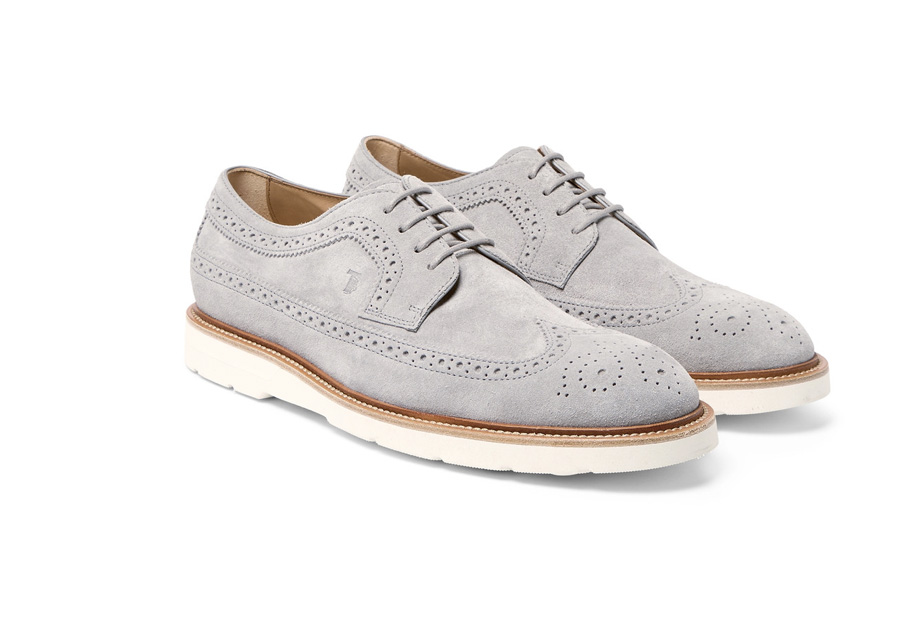