A Checked Suit Is The Secret To Timeless Style; Here’s How To Wear It

Plaid suiting is a sartorial style that could potentially outlast time itself.

The squared pattern is leaving its check on men’s tailoring; stamping jackets, trousers and the full three-piece suit. As the timeless pattern does a dance with modern colours, the check has come a long way since the Scottish kilt. And don’t worry, the masculine pairing of checks and a suit means there’s nothing pretty-in-plaid about it. 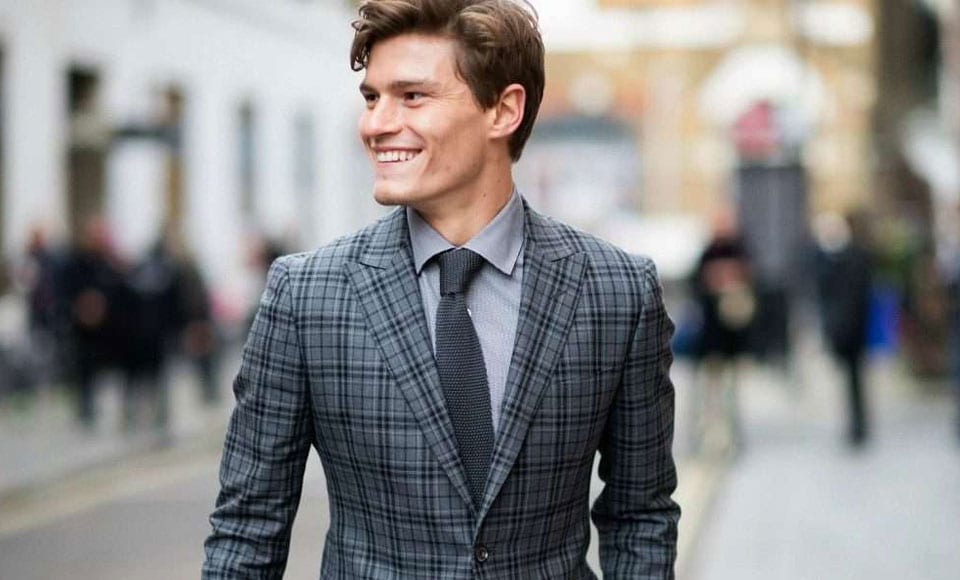 Plaid is the general umbrella term given to a piece of cloth that exhibits a checked pattern. And within the plaid family there are types of checks, such as tartan, windowpane, madras or gingham. Plaid finds its heritage in Scotland but has since found itself onto pretty much every continent (maybe not Antarctica, you don’t see penguins dressed in kilts).

Let’s take a look at the types of plaids worth check-ing, before learning how to wear them too. 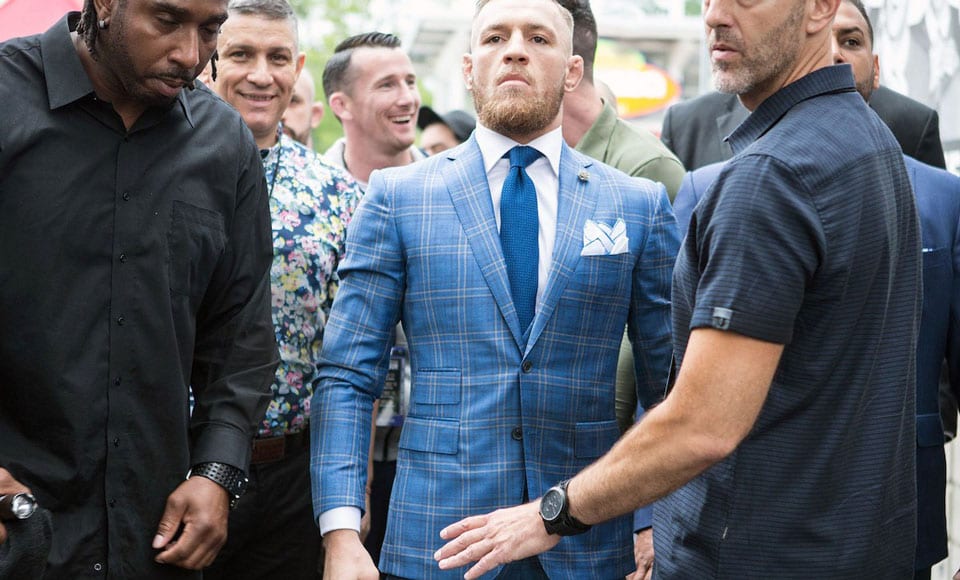 Tartan stems back to late 17th century Scotland, where it fashioned kilts and served as a symbol of rebellion against England. The Sixties saw the plaid hit men’s workwear shirting, before the punks took tartan back to anarchy once more in the Seventies. It’s the original plaid and today, comes in every colourway – not just red, black and blue. 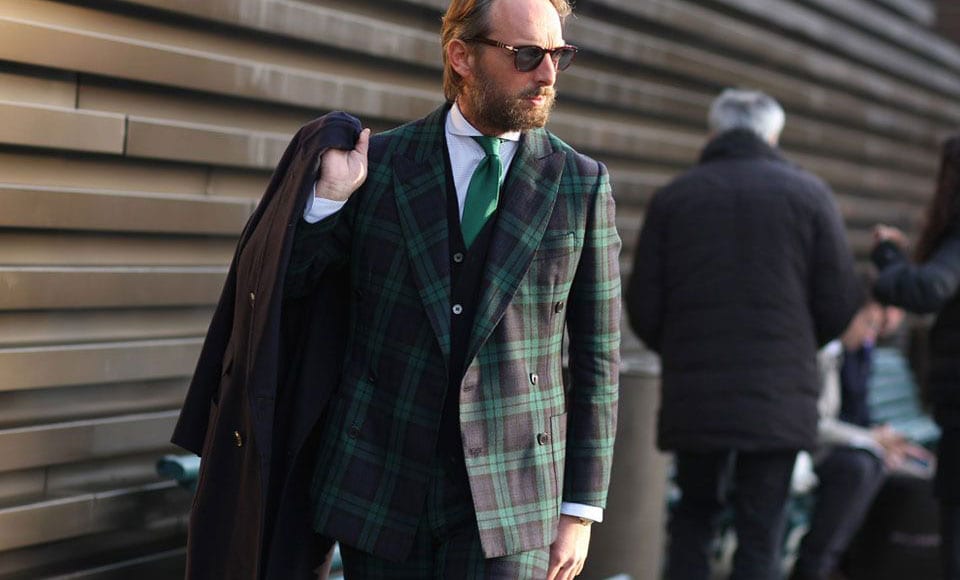 Blackwatch is a tri-coloured check recognised for its midnight blue and emerald green squares, separated by black lines. A Scottish clan tartan, it’s a refined check, perfect for gents seeking subtleties in plaid and a more traditional suit look. 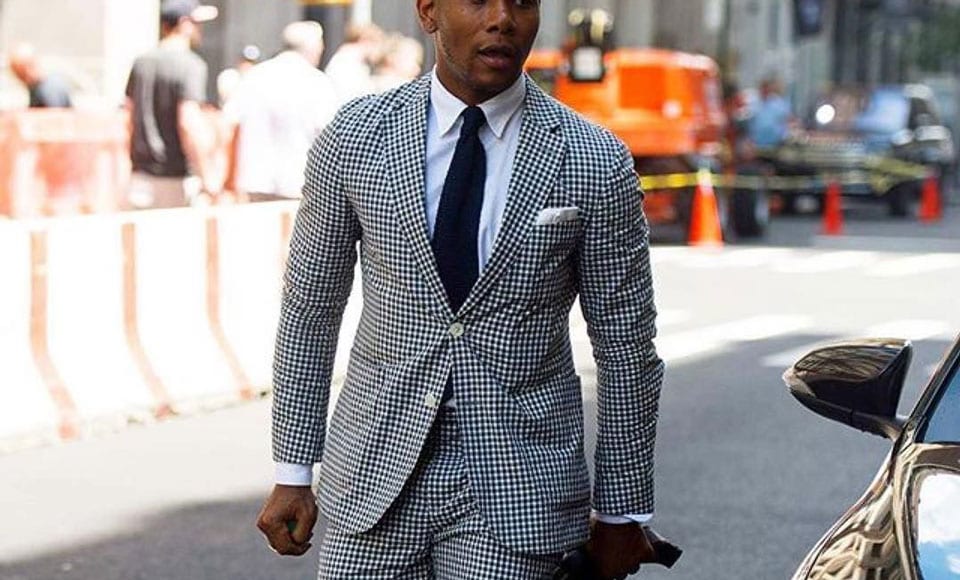 Roaring along with the British mods, gingham hit it big in the sixties. Consisting of mini square checks in two colors (typically white and one another colour), it has been termed the ‘tablecloth pattern’ by unknowings in the past, but the micro-check is spreading onto jackets and waistcoats of late. 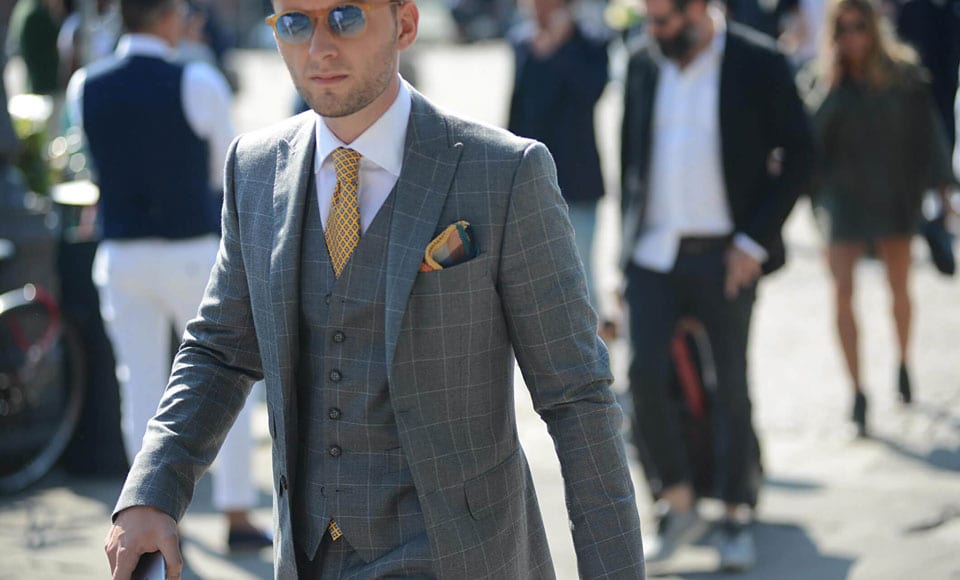 Big in the Forties (think Johnny Depp in ‘Public Enemies’), windowpane plaid consists of very wide checks, often in white or off-white. It gets its name from the fact that the pattern does indeed look like a series of window panes, which adds quite a bit of dimension and a huge statement to a suit, or separates. 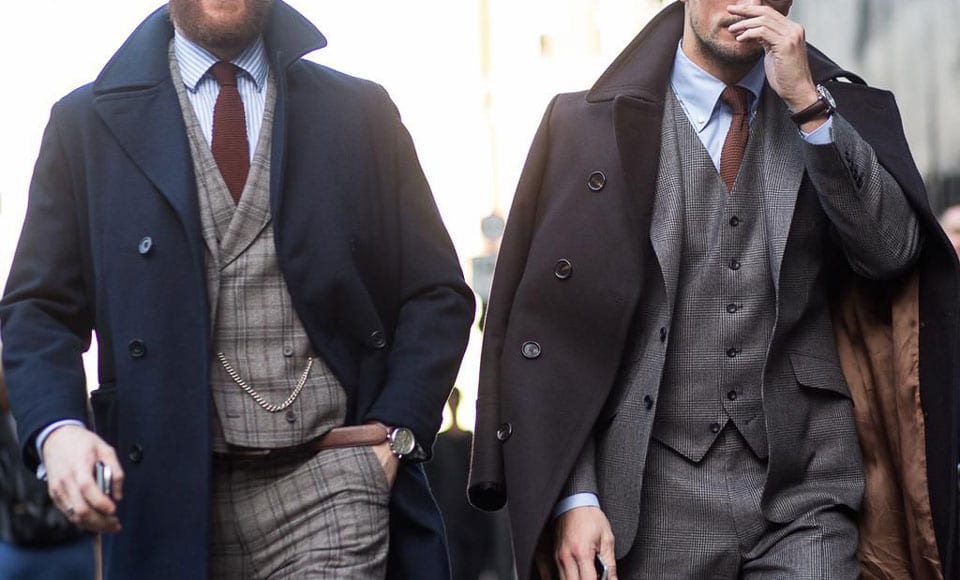 Also known as Glen plaid (taken from the Glenurquhart Valley in Scotland), the Prince of Wales check was dubbed so as the Duke of Windsor helped to popularise it last century. This pattern consists of tightly woven small and large checks in muted colours, usually greys, blues and whites. 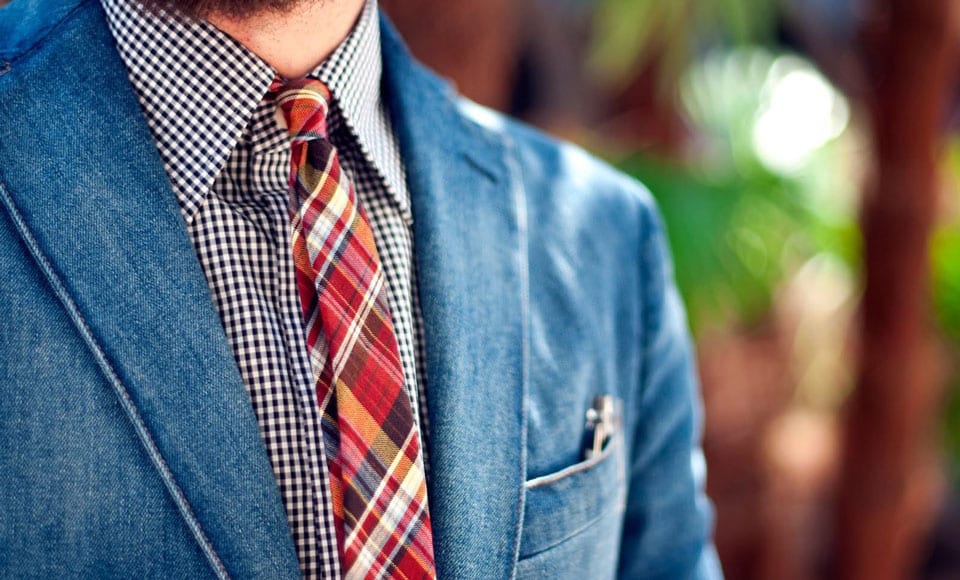 Madras print stems from India and comes in soft, vibrant colours – like those seen in an East Indian sunset. It’s preppy and summery, made up of checks and stripes, which are somewhat formed uneven. This gives Madras a visual depth and dimension.

How To Wear Checked Suits 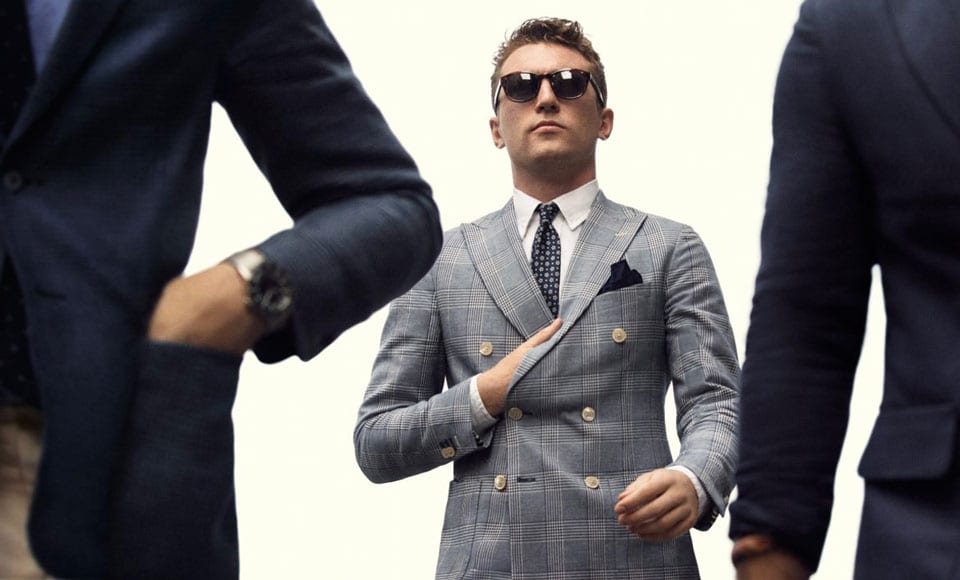 A full suit in checks is indeed the biggest statement. For work, opt for a grey Prince of Wales check in smooth, wool or a navy suit in gingham, both with tan shoes. While the bolder windowpanes and tartans may not be corporate enough, they make for a dapper summer suit, especially in cotton or linen.

Windowpane in grey and blue matches easily with two other big patterns: spots and stripes. The largeness of the check acts as blank canvas for a blue striped shirt under a navy, white polka dot tie; keeping the blue theme across each piece.

A grey, teal or white linen checked suit (with a dash of pink, green or yellow) looks great with a paisley tie and pocket square, ensuring the shirt is plain and neat. You can’t beat white, really.

How To Wear Checked Blazers & Jackets 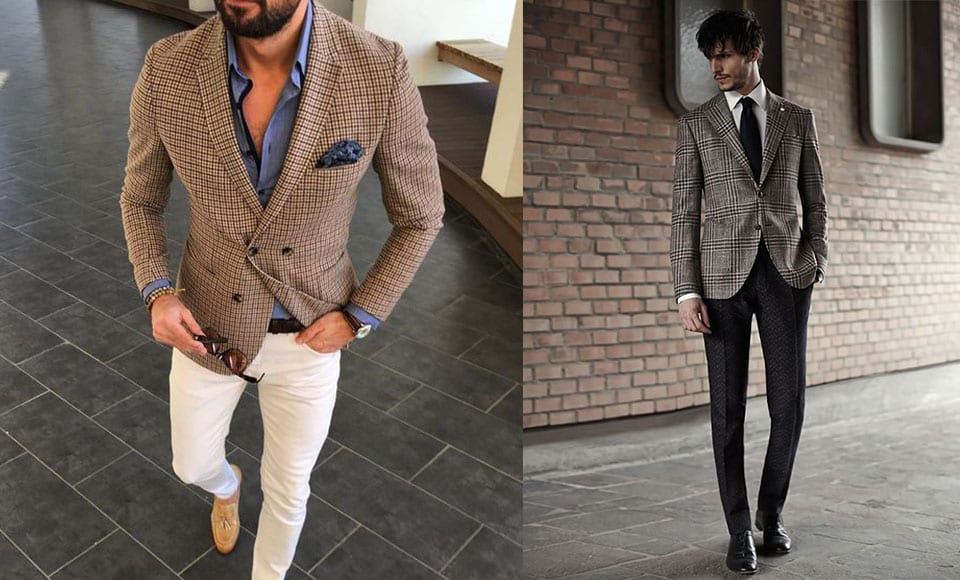 A checked blazer or jacket is the most common and safest option for gents exploring patterned tailoring. A jacket with textural tight checks in navy and black, over navy pants, a black tie and white shirt, is absolutely work ready.

Elsewhere, a light linen plaid in nautical blue over an tonal denim shirt and white trousers show just how fabric and patten-savvy you are; mixing in different subcultures (American workwear and the south of France) for a nothing-like-it summer look that will have everyone pining your style.

How To Wear Checked Waistcoats 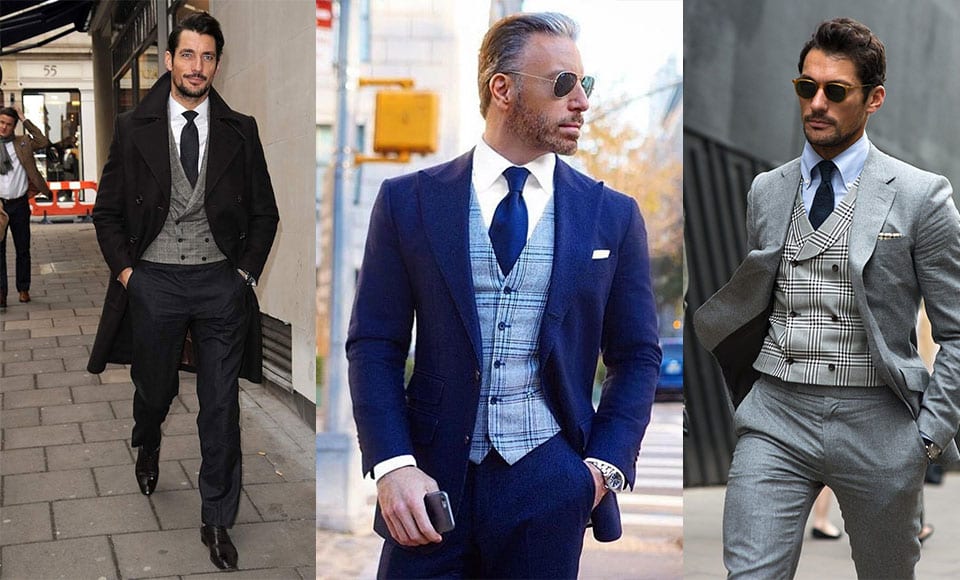 On its own or as a three-piece suit, the checked waistcoat is this season’s ‘it’ tailoring. The three-piece is sartorially timeless, so roll this way with neutral browns, navy or black with mid-size check and slightly woollen touch for winter. A tie is not essential, but the waistcoat must always be buttoned and add a muted-coloured pocket square like mulberry, layering the suit over a bronze-y tan top coat.

A two-piece suit gets a facelift with a contrast check waistcoat. Double-breasted adds another level of suave, opting for gingham or a small plaid to keep the look more formal. Keep the suit plain and light in summer, matching a hue from the check to make it more streamline.

How To Wear Checked Trousers 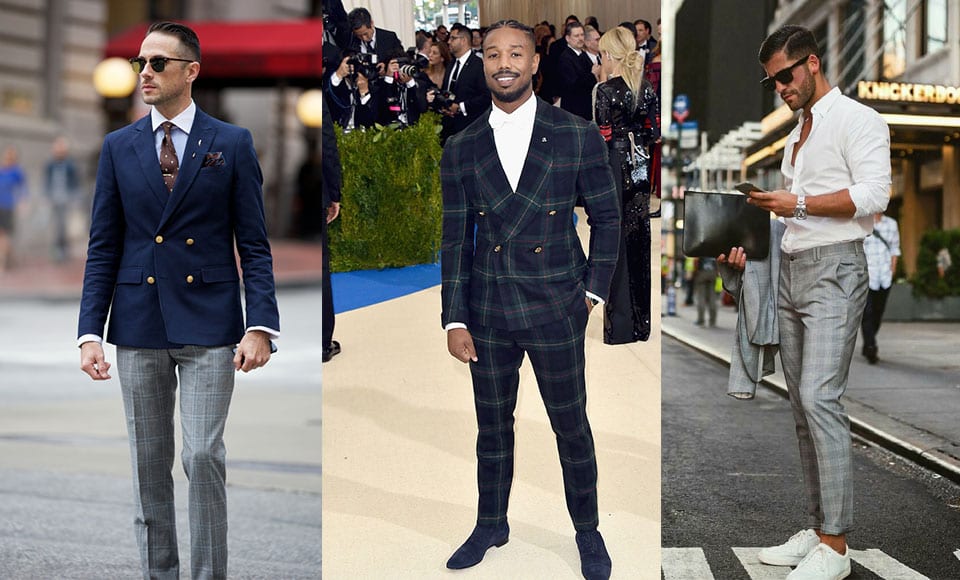 The road less travelled for the check is definitely on the trouser. It’s the most statement of ways to wear the pattern and the most foolproof when splitting a full plaid suit.

Go for a tartan or black watch trouser – in navy, grey or green – paired with a double-breasted  blazer in a complementary colour such as dark green or navy. An ice blue shirt keeps the colour scheme aligned; turned royal with a red gingham check tie. Finish the look with brown tassel loafers and Madras check pocket square.

If the check is more windowpane, the opennes plays well with sugary hues like pink and duck-egg blue. Opt for a texture wool or mohair fabric for more heritage take on the dandy pant.

Double-strap monks base out the look under a white linen blazer. Or try a black denim jacket for something more sinister.

Now go forth and get checked, you magnificent bastard.