Everything You Need To Know About Wearing Loud & Bold Prints

Colour is your friend if you treat it with respect.

For a long time, men have been expected to dress inconspicuously. Keep it to the staple navies and greys, anchor your outfit in one colour, and whatever you do, don’t out-dress your partner. The last one still rings true today (don’t do it, boys) but it’s fair to say that lots of guys on the menswear circuit are happy to be audacious with their sartorial decision-making, naysayers be damned.

You might hear a bit of yourself in that. You’ve possibly just bought a wicked loud print shirt that you want to introduce to the world, but you’re not sure how to go about it without earning a derisive nickname that’ll dog you even when your ashes are being sprinkled into the wind. Or maybe you are just a bit bored of the monochrome, single colour routine you’ve fallen into along the way. Nevertheless, variety is the key to a remotely-interesting life, and your clothes are no exception to this (hopelessly trite) platitude.

RELATED: These Are The Most Unforgivable Men’s Fashion Sins

Some guys love a bold print. Others wouldn’t touch them to save the lives of their beloved. Who knows who’s right. Either way, this guide will help you navigate the tricky world of loud prints, sans embarrassment. We’ve collected a (by no means exhaustive) selection of popular prints, alongside a few key pointers on how to include them in the rotation.

This is a selection of some, but not all, of the prints you can expect to find on the market. 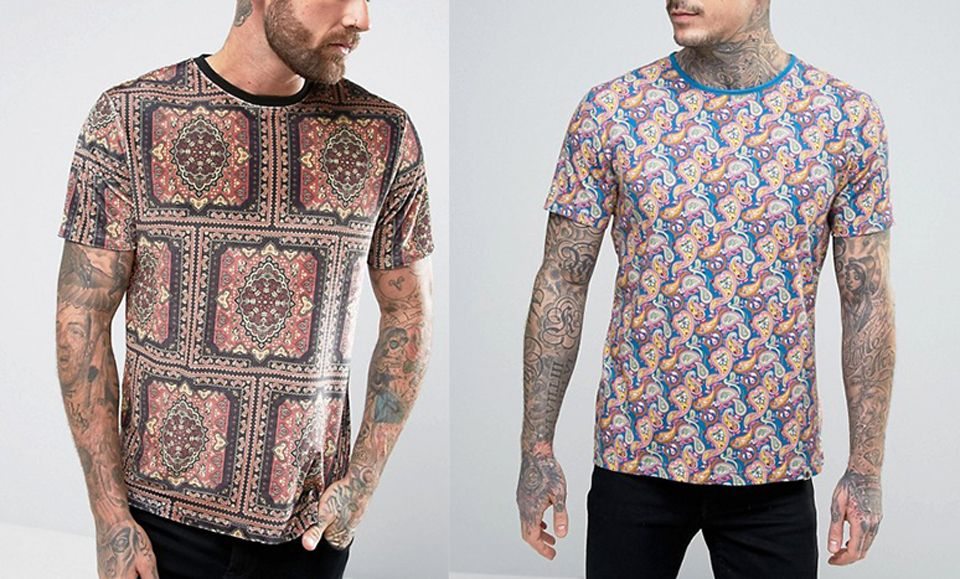 Although originally imported from Central Asia in the 18th century, this print derives its name from the township of Paisley, Scotland. During this period, local weavers produced shawls featuring the patterns they observed coming from India and Persia. It’s the teardrop or curled kidney bean pattern you see on old-guy vintage ties and at discount Persian rug stores. Frequently seen on accessories, but we’ve legit seen a paisley jacket recently (not that anyone was game enough to wear it). 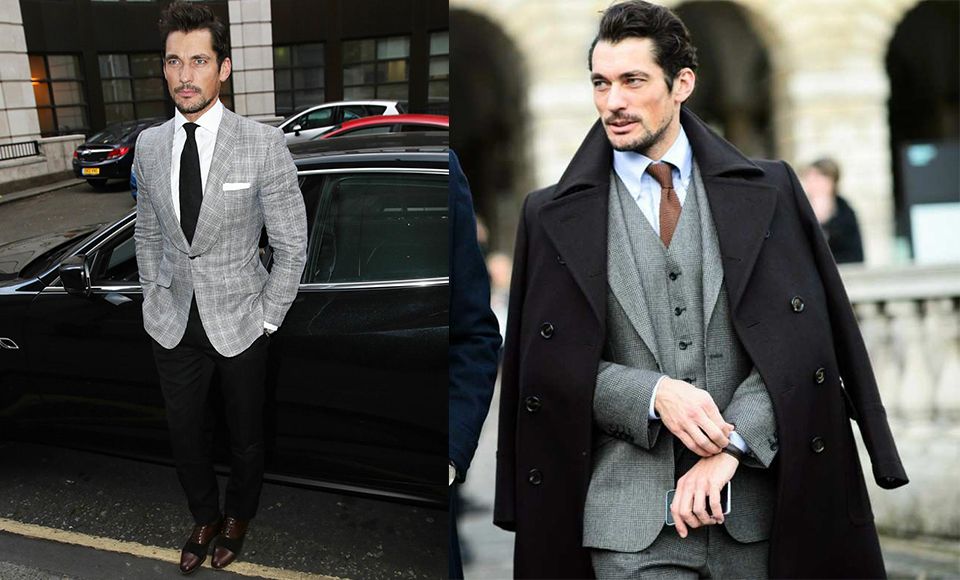 This popular pattern goes by glen plaid, glenurquhart check, and the Prince of Wales check. Whatever you call it, it’s usually associated with the sartorially gifted, rakish royal Edward VIII, who promoted the pattern as a young prince (although many say that’s where his talents ended). However, he certainly wasn’t the first person to make use of it, royal or otherwise. The Prince of Wales check is noticeable for its combination of two light and two dark checks with alternating stripes, intersecting to create an irregular but distinctive pattern. 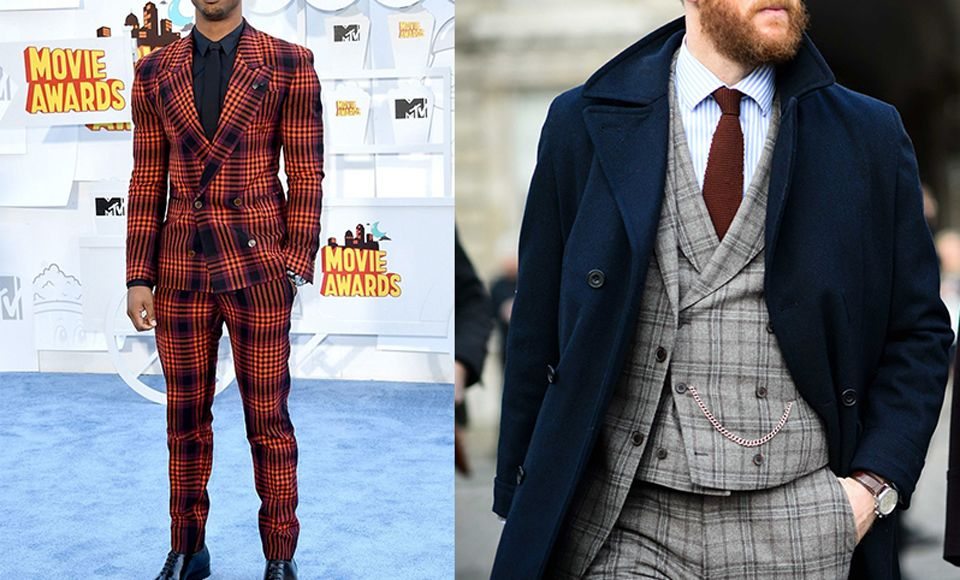 Although it nominally belongs to the big family of checked prints, gingham is actually derived from the Malayan word genggang, which means ‘striped’. These days, gingham shirts are an omnipresent feature in wardrobes and shop floors. Sometimes disparaged as the tablecloth check, the gingham print is pretty much the tomato sauce of menswear. Everyone probably has one stashed away somewhere. 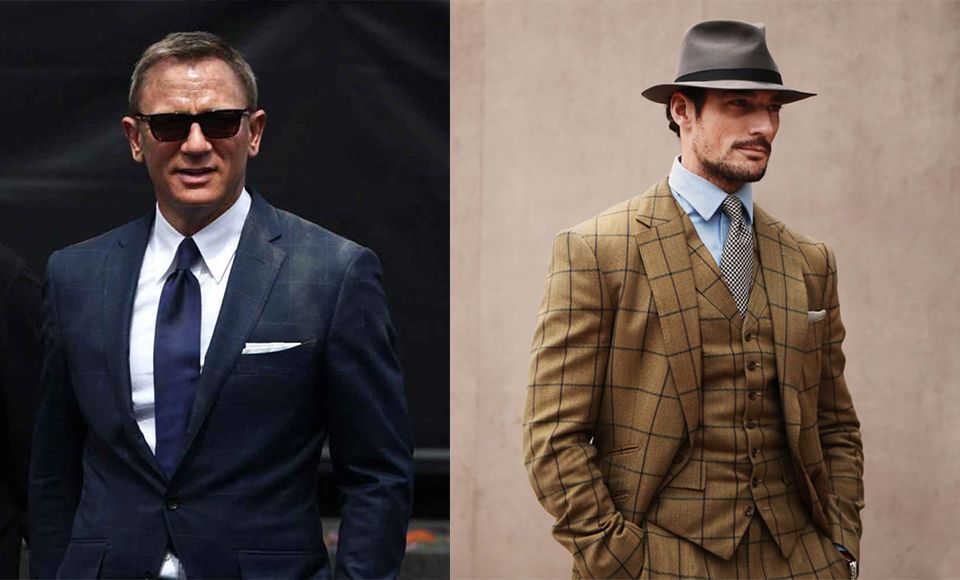 Popular on suits, overcoats, and shirts, the windowpane check is distinguishable from its glenurquhart brethren simply because it features an evenly-patterned singular check across the fabric. Once again, the dashing Edward VIII – by that time the Duke of Windsor – was fond of this pattern on his jackets. He was in good company, however, and this print enjoyed some popularity in the 20th century. It’s made a bit of a resurgence, particularly on statement blazers and sports jackets. 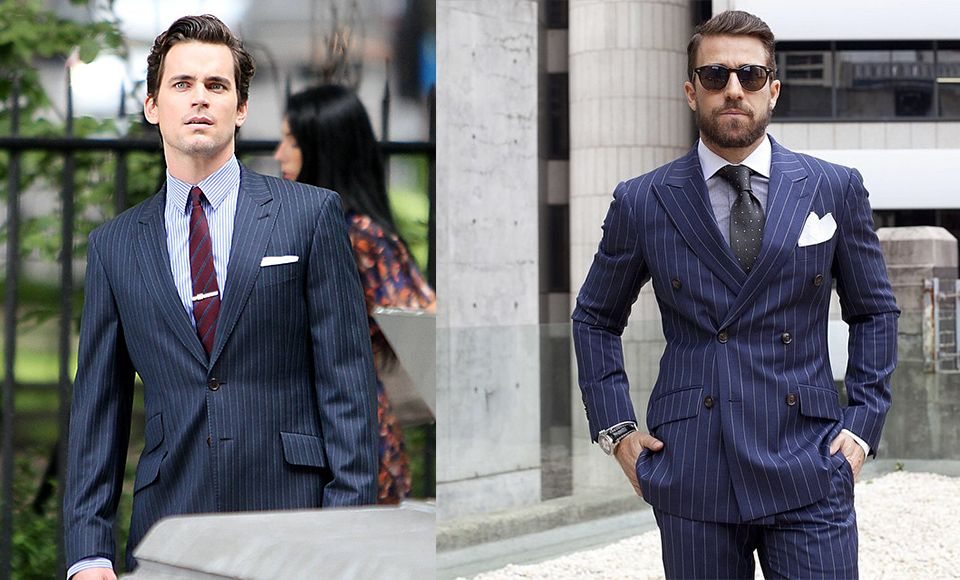 No one really agrees how stripes trickled down into the male wardrobe. Some say the motif was greedily plundered from historic sportswear. Others claim that English bankers were the progenitors of the style. Who knows. Today, striped patterns are famously associated with gangsters, Wall Street douchebags, and their various imitators. They also have a strong (and less douchey) affiliation with boating and other sports. Pin stripes are thinner than chalk stripes, although both are common in business wear. Bengal stripes are a common feature on men’s shirting – think the venerable Brook’s Brothers button down. There’s also an encyclopedia’s worth of the history of striped ties, which were used to denote affiliations to a regiment, tennis or golf club, or member’s only club. 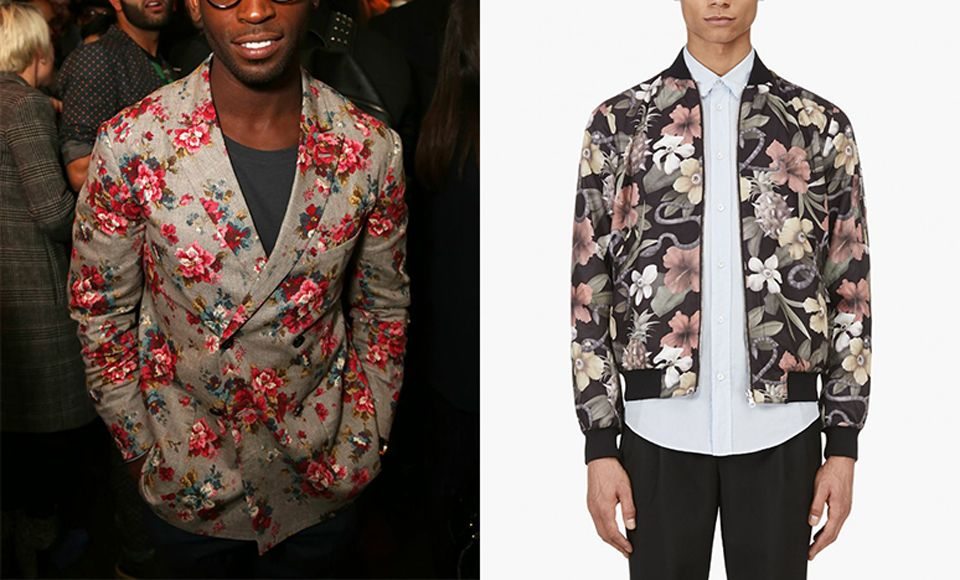 Flower power hasn’t always attracted a male audience. In textiles, florals have enjoyed a rich history in East Asia, from which they were originally sold to European traders and replicated. Florals are often combined with cultural motifs or symbols, particularly on the camp-collar and bowling shirts that are hugely popular now. There’s still some lingering hesitation towards floral prints in masculine sartorialism. Plenty of blokes think its effeminate, emasculating, and so on. That’s essentially bullshit. We like to think there’s nothing more emasculating than letting the judgement of other people determine your style (unless it’s something disastrous like a floral jacket & shorts combo). 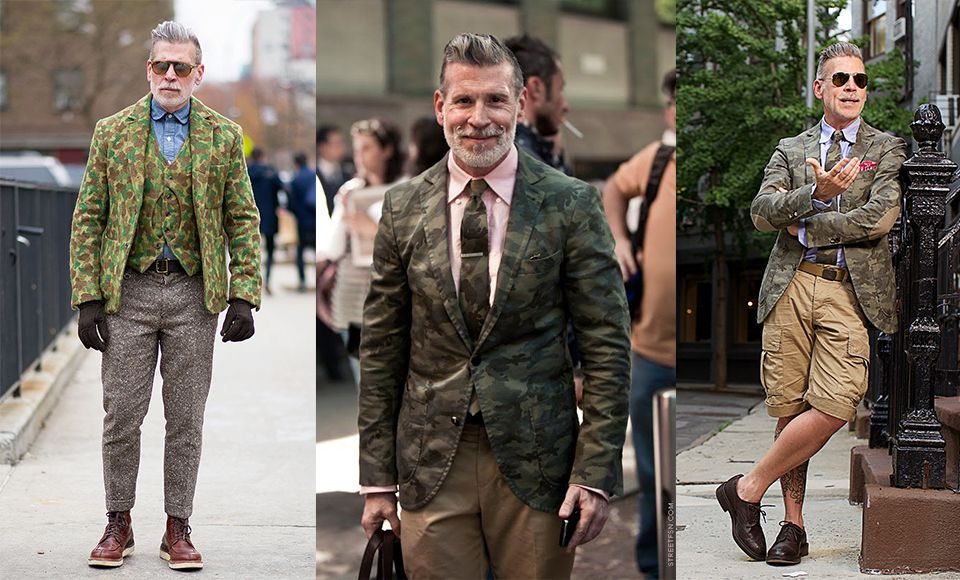 Like plenty of things originally conceived well outside the parameters of ‘farshun’, the art of concealment has been thoroughly reappropriated by designers on high-street who have no use for its original function. Soldiers have employing inventive methods to conceal themselves from adversaries for as long as history has been written.  However, the first widely-used camouflage pattern in modern warfare originated in Italy in the late 20’s. The rest of the world caught up shortly thereafter, although its use was primarily restricted to elite units. Although the trend has come and gone over the late 20th century, camouflage is still popular in urban streetwear. Recently, the odd camouflage tie or blazer has been observed in the wild.

Now that we’ve illustrated some of the key patterns doing the rounds, we’re going to set you up with a few simple tips on incorporating loud prints into your wardrobe and daily rotation. 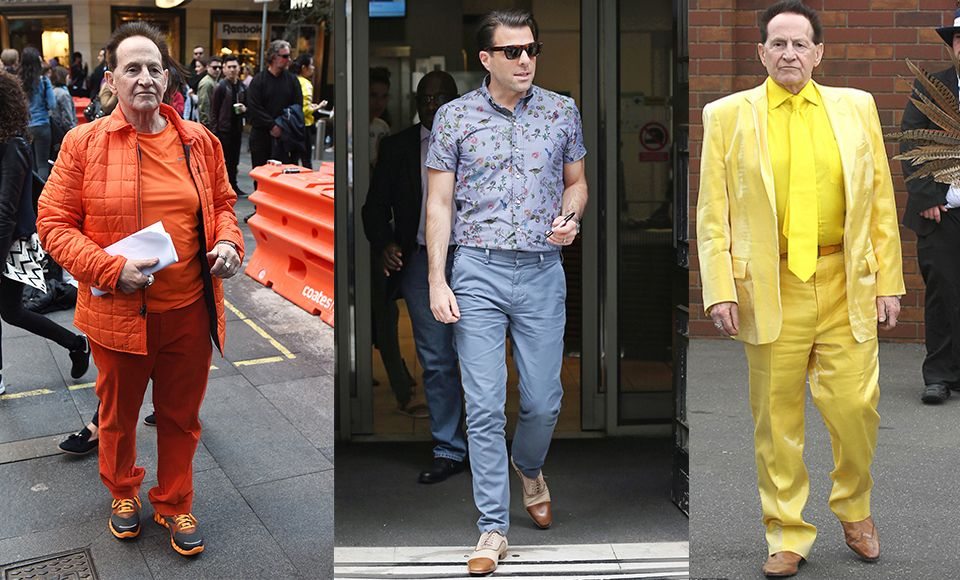 As above, no, yes, no. First thing’s first. Does the event or occasion call for a loud print? Look for a dress-code stipulation on the invite. Ask a mate whose been to this sort of thing before. This is because some events are particularly stringent on what you can and can’t get away with. A black-tie soirée with stringent dress standards, for example, might see you ejected by the doorman if you rock up with a paisley bow tie. Is it an engagement party or wedding? No one likes the wanker who sartorially upstages the groom. Is it a funeral? I won’t bother explaining that one. Yacht party or debauched end of year bash? All bets are off. Loud print that shit to your heart’s content (just don’t look at the after-action snaps or look your boss in the eye ever again). 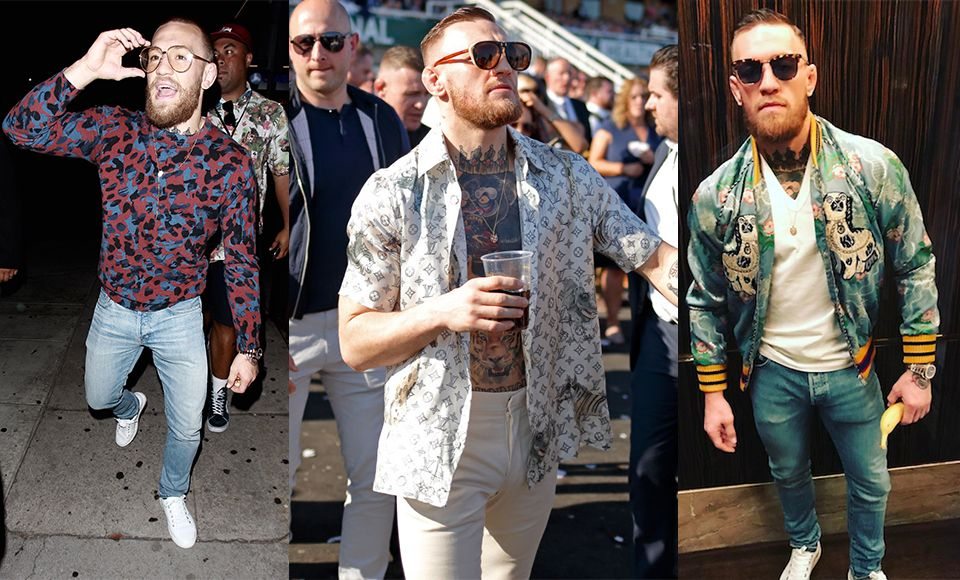 If you’re going to bring a loud print to town, stick to just one. Combining prints is a tricky business, and few blokes have the nous to cash in. Employing a single loud print ensures that it becomes the centre point of your outfit, and doesn’t have to compete with other patterns elsewhere. You’re less likely to commit a faux pas if you exercise restraint. For example, a bold floral print bowling shirt is best paired with plain navy shorts in summer. Party up top, business down below (or something). 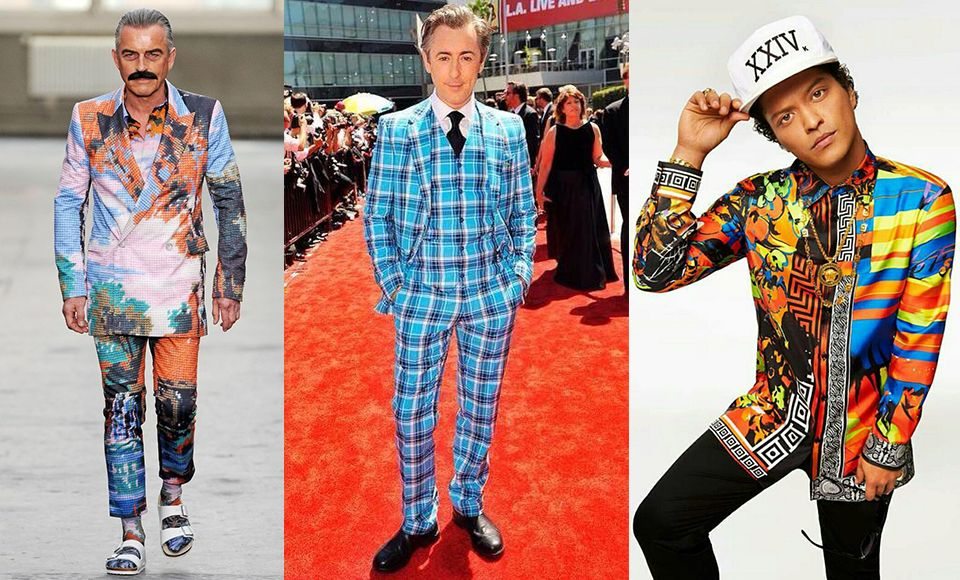 …but if you can’t resist, keep a few general guidelines in mind before you start throwing caution to the wind and chucking loud prints together like it’s your last day on this good earth. The first and best rule is to ensure that the prints aren’t the same size. If they are, they’ll clash and give people a splitting headache. It’s like sartorial friction. Furthermore, limit your print salad to two, and no more. I’m yet to meet someone who has the time or sartorial instincts to make three prints work on a consistent, regular basis. Anything excessive looks like you’re trying to attract attention or are a bit of a clueless numpty. Either way it’s not much of a panty dropper. 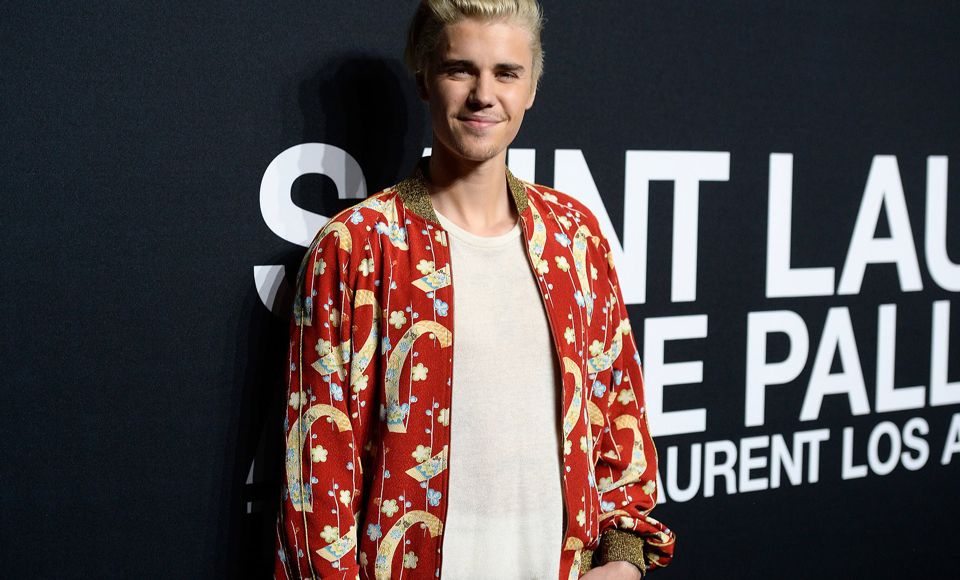 This one is highly subjective, but related to the second point. A loud pattern generally looks best if the rest of the colours in your outfit are understated and neutral. Mild, neutral colours sit in the background while the print occupies the centre stage. You want to give the print space to do its thing. Too much colour can overcrowd your style and make you stand out (not in a good way). You can, of course, experiment with colours as you please. But if caution is your priority, then use a neutral selection to let the print stand on its own.

Don’t wear the same loud print on regular rotation. Too much of the same schtick, and you’ll become the ‘loud shirt’ or ‘statement jacket’ guy, instead of Tom, James, Baz, or whatever.

Do ensure that any prints you combine are different sizes. Don’t give your companions a migraine in a tragic attempt to break sartorial boundaries.

Don’t wear too many prints. One is fine. Two is bold. Three is reckless abandon and hard to pull off without looking like you’re having a quarter/mid/twilight life crisis.

Do man up and wear floral. Real men don’t let locker room banter determine their wardrobe (unless your mates are telling you to stop wearing fedoras, in which case, listen to them).

Don’t let the pattern wear you. If you don’t have the cojones to pull it off, leave it at home. Otherwise, be confident in your choice.