When a company which started out making tractors finds their strength in supercars before deciding to make an SUV, a slight cause of concern is natural.

While there has been a trend for every car company to at least offer one family mover, Lamborghini believe it will help them double their revenue. That’s a lot of Lamborghinis at the weekend soccer matches but let us guide your reservations.

As a bonafide family man looking to reacquaint myself with some proper Italian pride, we put the brightest version of the Urus through its paces in typical everyday life from baby duties to the iconic Bunnings sausage sizzle run. Here’s what we discovered about this beautifully ostentatious beast from Bologna…which is oddly also one of the internet’s hottest memes at the moment (“You like?”).

Quick Facts About The Lamborghini Urus 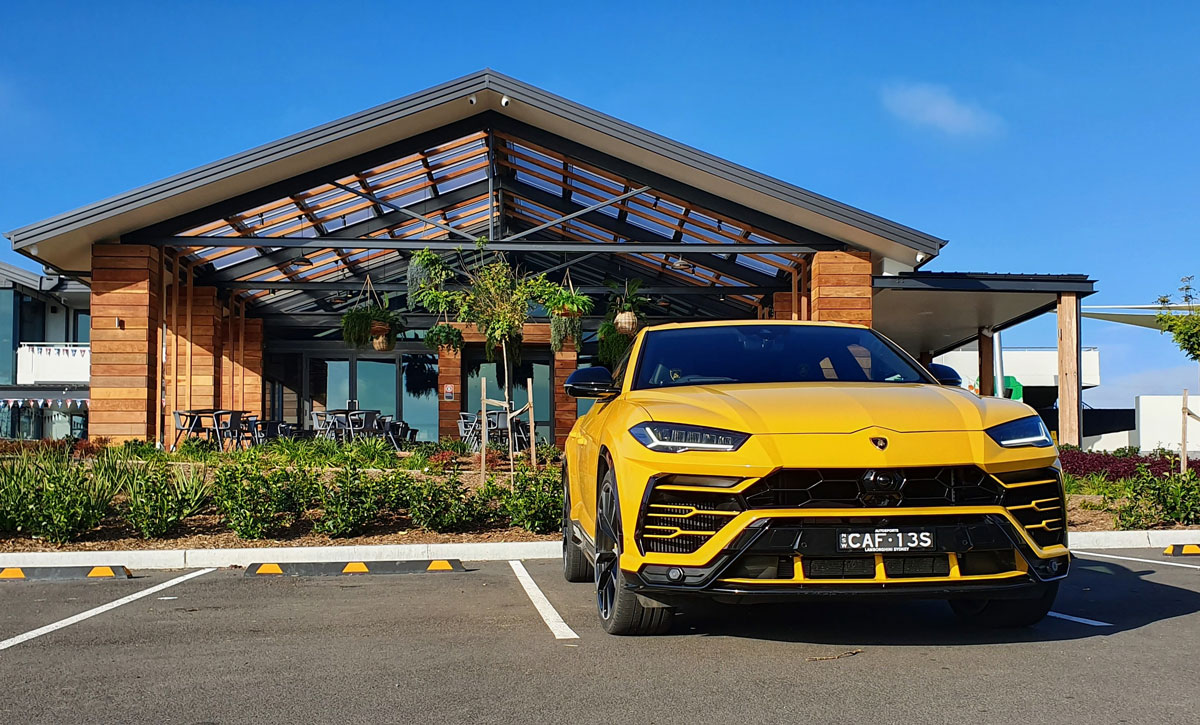 In non-car-design vernacular, it’s a bratwurst posing as a porchetta. Meeting the Urus for the first time, there is no doubt you’re looking at a Lamborghini. While it has more doors and seats, the front and rear of the Urus carry design traits seen in their two door supercars. The headlamps, grill and boot have design cues that even without a badge would tell you this came from the stables of Lamborghini.

2. Italian mother, German father. Inside the Urus is a hybrid “bitsa” 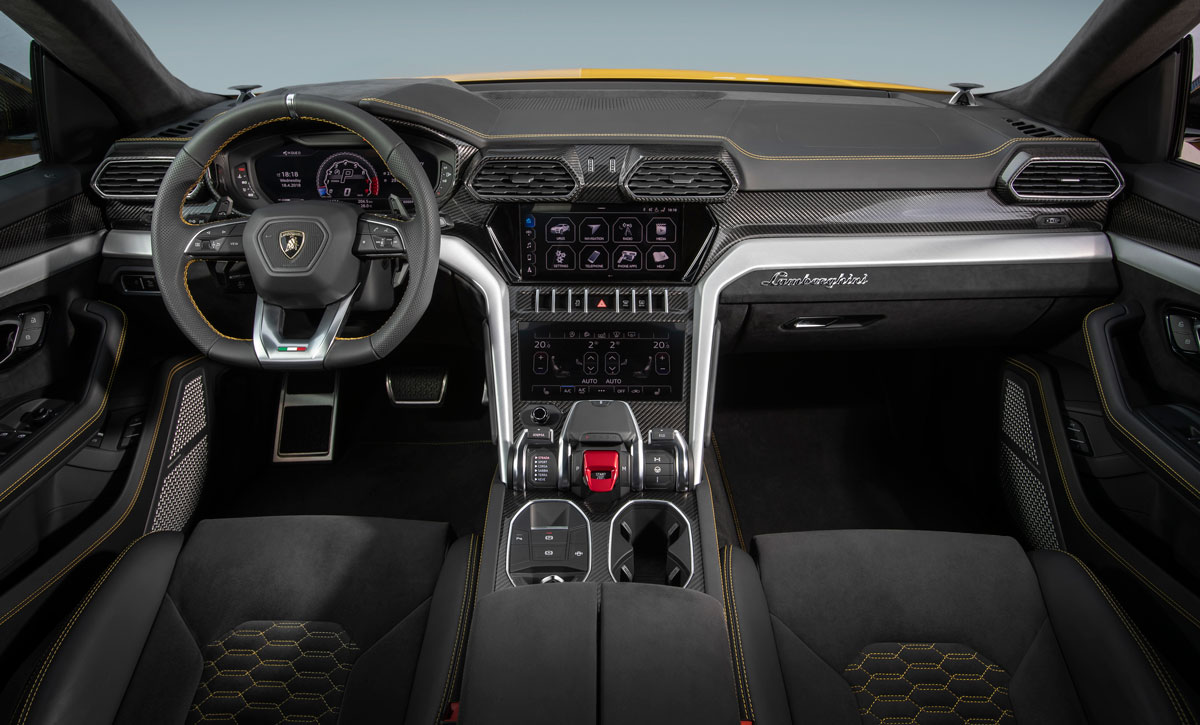 Stepping inside and you could be forgiven for thinking there was a large influence from Audi, and you’d be right. Most of the entertainment system, indicator arms, even power window switches appear lifted from Audi. While Audi make wonderful interiors and we welcome this, does it make the Urus less of a Lamborghini and more a dolled up Q7?

3. Despite being the most overweight Lamborghini, it’ll still turn heads

Driving the Urus on a multilane highway you’ll see more iPhones pointing at you than a B grade celebrity. Whether it was the passengers in the car behind us or the tradies pressing their faces against windows in the next lane, the Urus was a real head turner. Whether or not this is your thing, it’s certainly a Urus thing. 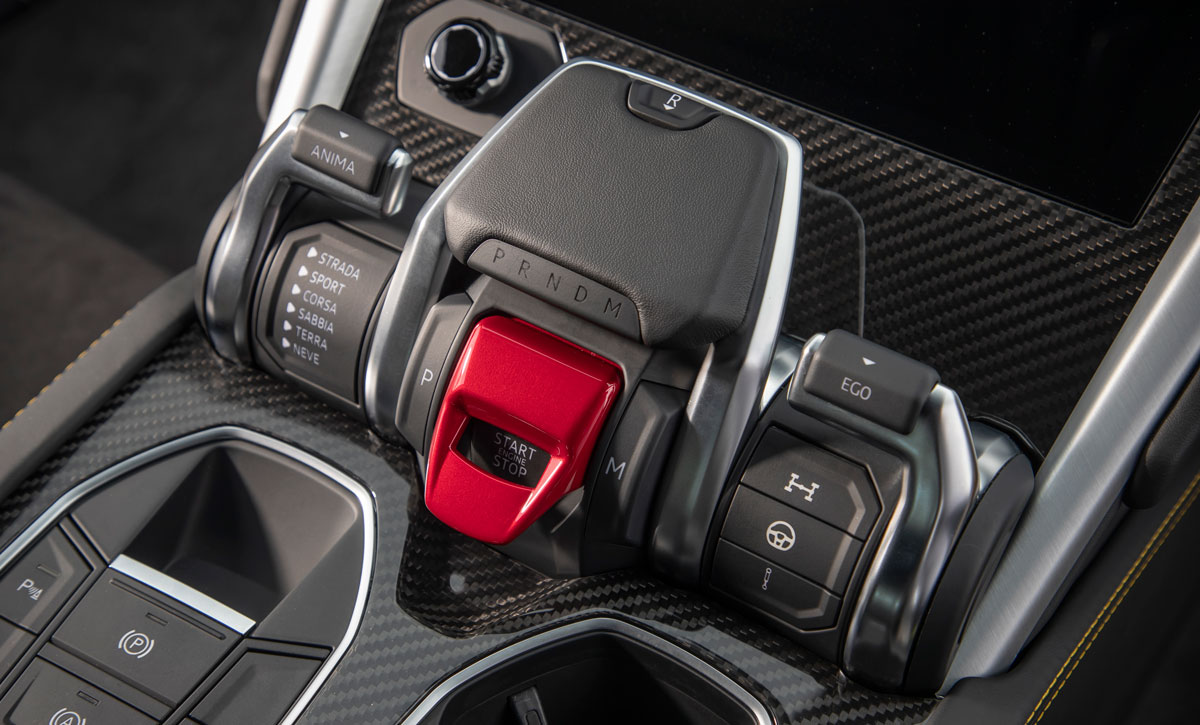 Firing up the Urus after flicking the jet fighter switch will awaken a twin-turbo V8. It shook the wine glasses in our kitchen and told the neighbours we were (temporarily) a cool family. While the Urus has a series of modes and even further controls to tweak suspension, steering and response, we did appreciate the noise difference between Strada and Corsa. In Strada, the Urus could purr along quietly and even shut off four of its cylinders in highway driving. But in Corsa, you heard and felt the heart of a true Lamborghini, and boy does its performance deliver. 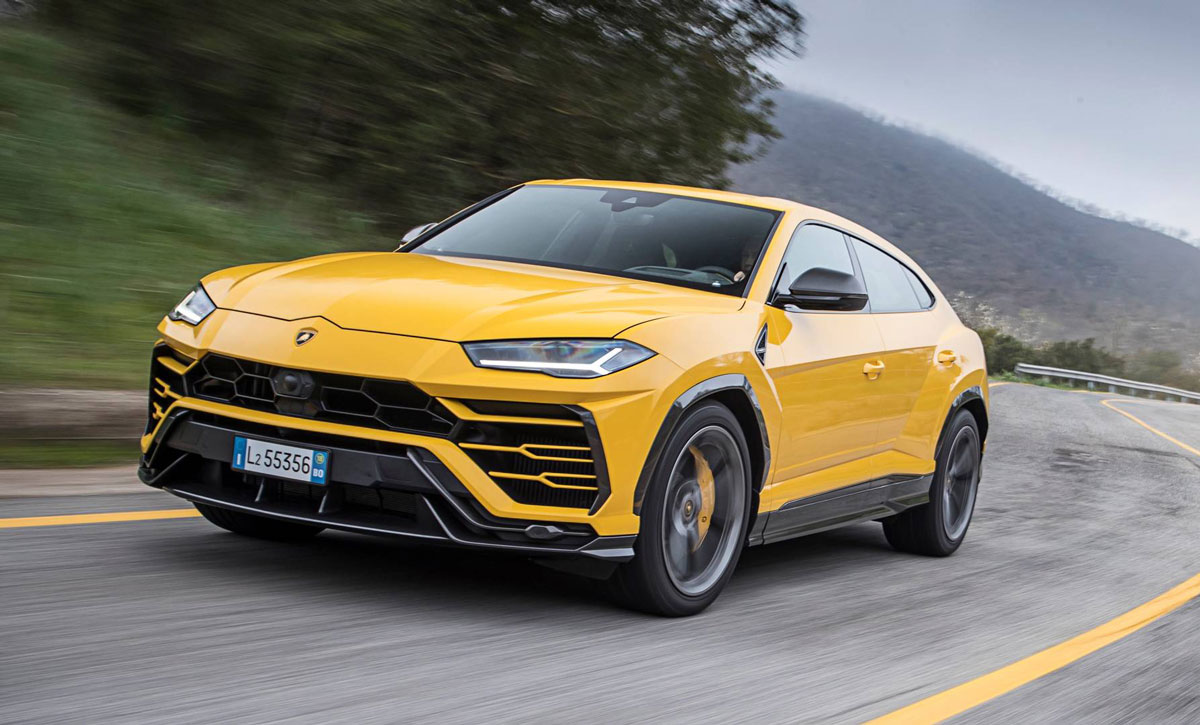 The Urus will take you from standstill to 100km/h in 3.4 seconds, the fastest SUV on the planet. It’ll make you giggle like a child at how impressive this feels from a vehicle that seats five in comfort. 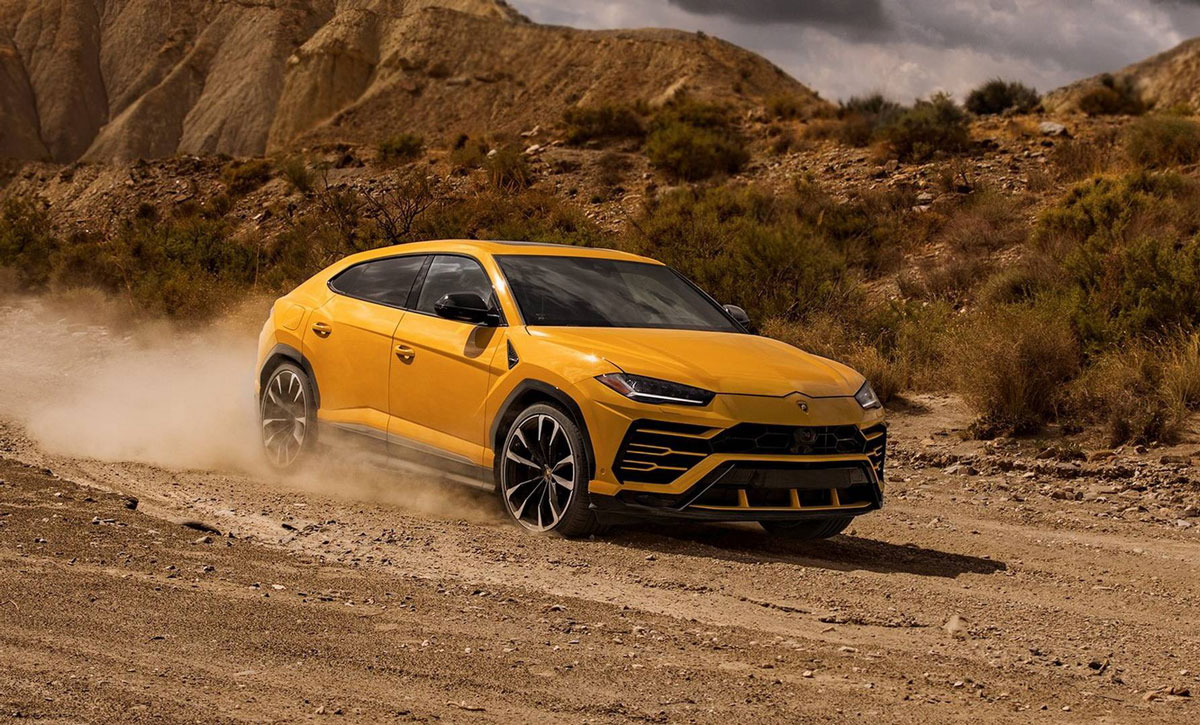 For the unsuspecting or from a distance, there is a good chance the Urus will be heard before it is seen. It is virtually impossible to lie to the missus about what time you got home because it didn’t just wake her up, it woke up the kids, too. Sure you could put the Urus in Strada to quieten the exhaust a little…but let’s be honest, you like it loud.

7. Stepping into the Urus is like checking into a day spa for influencers 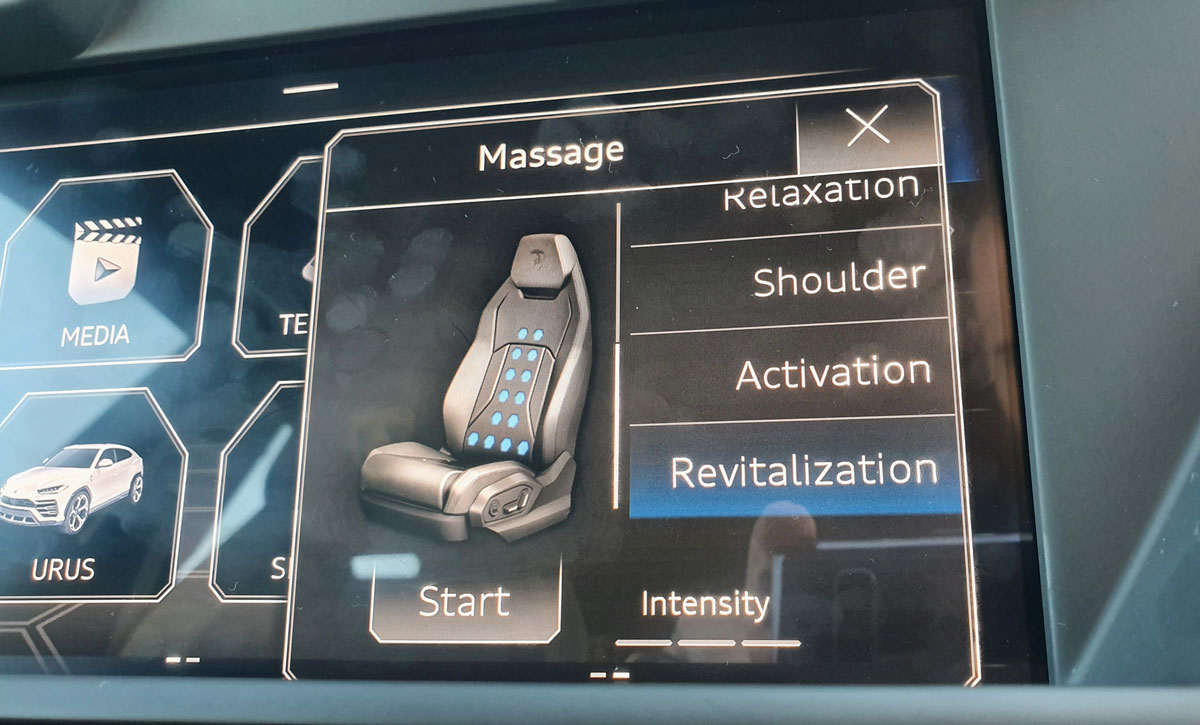 The confusing part about driving a supercar is that it normally isn’t the most comfortable of experiences. With the Urus there is an exception as this fire breathing bull has well upholstered seats with heating and cooling modes, but also a menu of various massages for the driver and passenger. It doesn’t just work at a standstill either, wherever you were driving, the seats could continue to give you a rub up and down your back that would keep you in the car long after you arrive at your destination.

8. The Urus can really sing…from the engine or the speakers 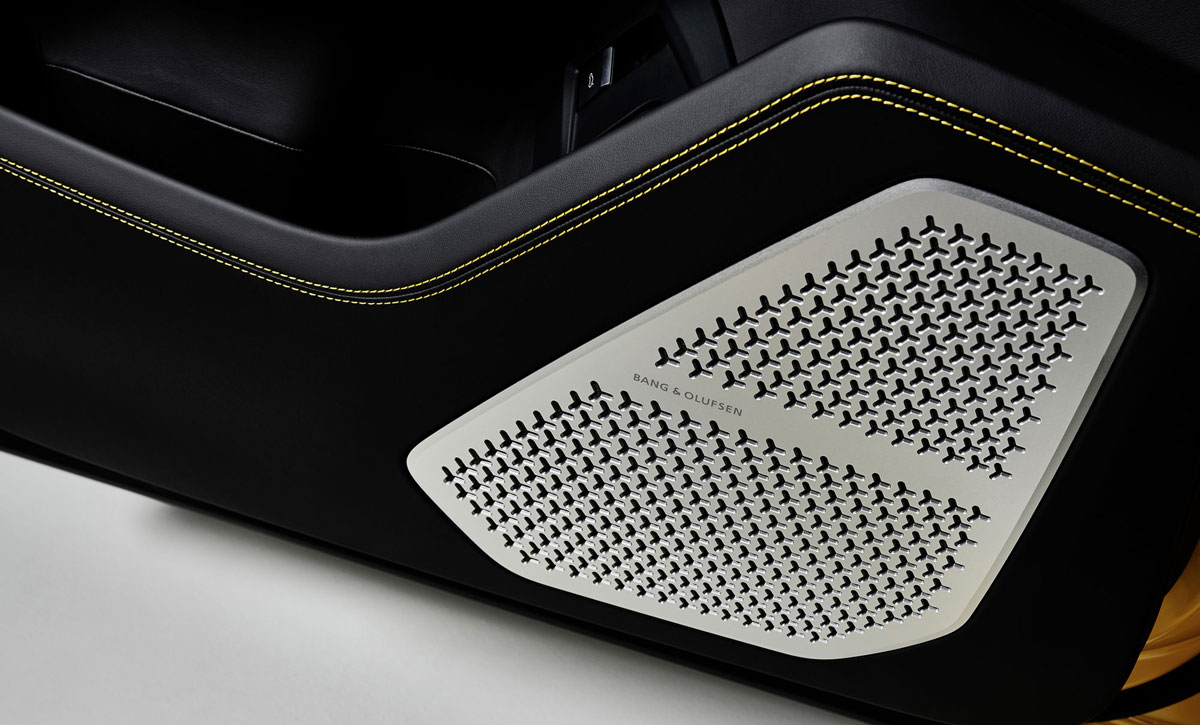 While we adore the sounds of a twin turbo V8 singing, the interior of this Lamborghini is also fitted with a Bang & Olufsen stereo with 3D surround sound. The front tweeters rise from the dash when you start the car in the same way a conductor steps up to the orchestra. With 1700 watts of power pumping through a total of 21 speakers, you’ll have Pavarotti in the passenger seat – or at least it will feel that way.

9. If you’ve got kids, the Urus provides free day care 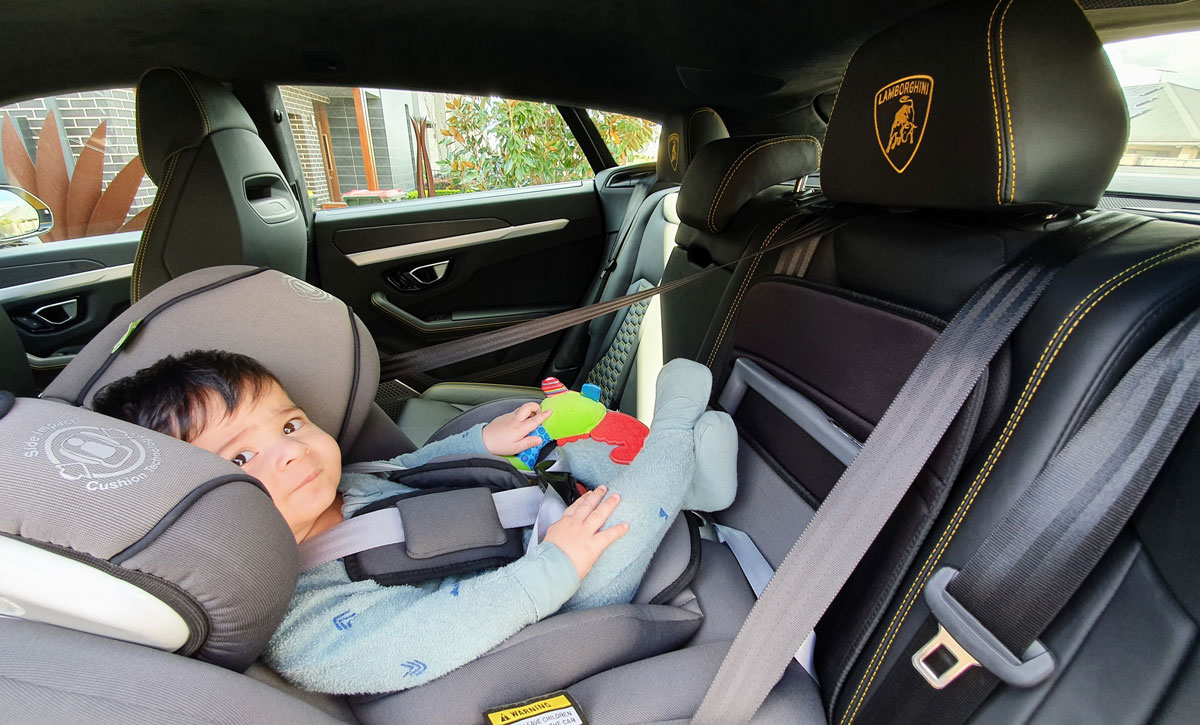 When couples progress to have a family, the routine is to buy an SUV and ditch the beloved coupe. If money is not a concern then the Urus might be the best of both worlds. Plenty of fun to drive but also a capable family car. The backseat seats three adults with ample leg room but also has ISOfix attachments for a baby seat.

10. The Urus has ample room to boot 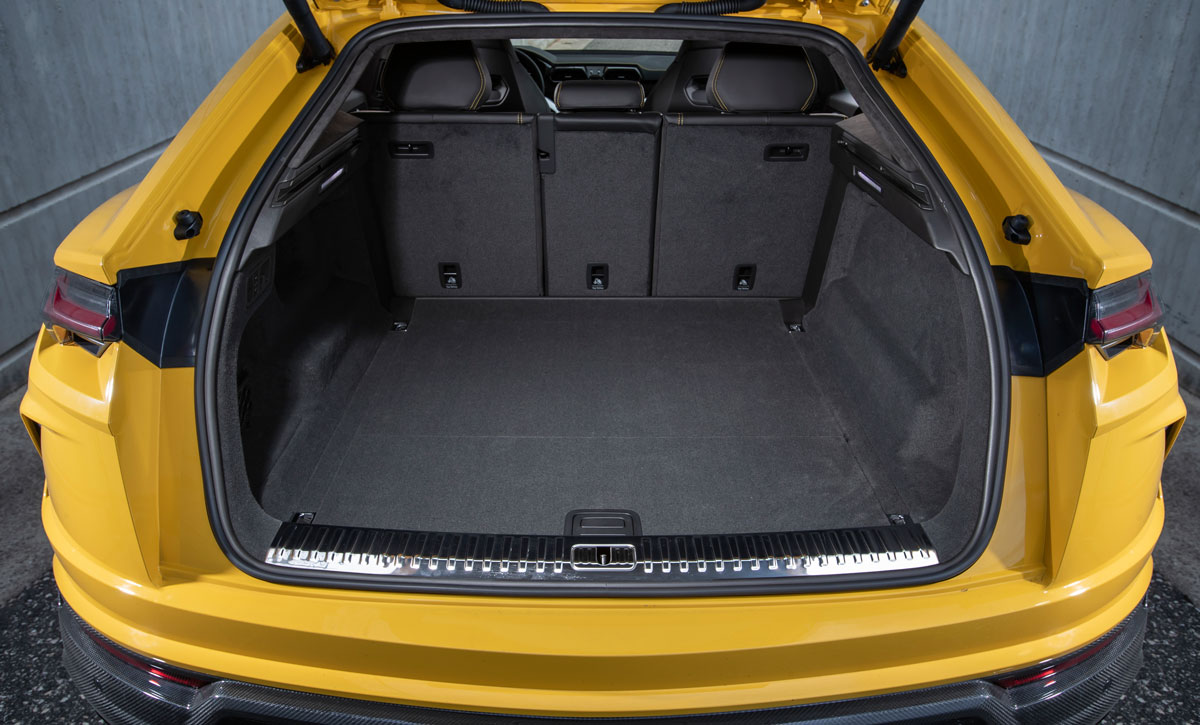 The boot is large enough for two large bags or a pram and barbecue. It was even a great match to our Bunnings haul with the rear seats down but we do suggest you add boot lining to avoid scuff marks. Sizeable IKEA flatpacks? Also a non-issue unless you’re buying a queen-sized bed or piano. With 12v connections in the back and at the front, the whole family could keep their mobile devices charged and entertained. This gave us enough time for a sneaky sausage sizzle at Bunnings but a word of warning: greasy fingers laced with BBQ sauce does not go well with Italian leather and flick switches.

11. This bull is surprisingly easier for the kids than the adults 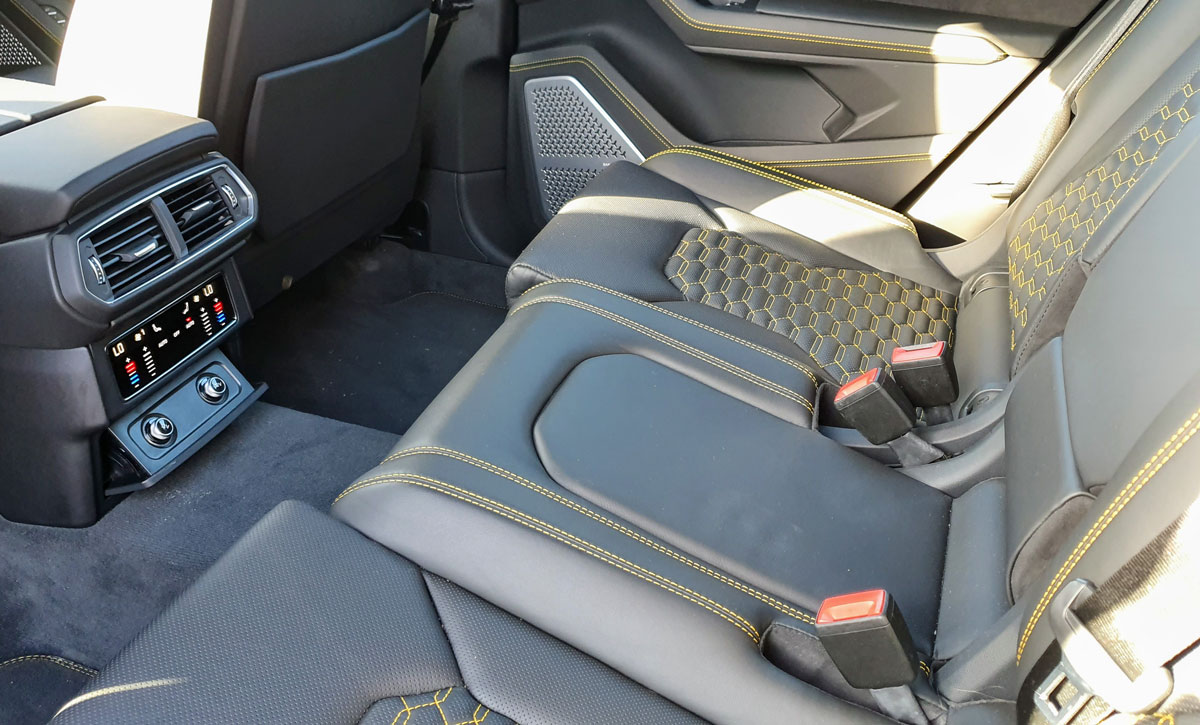 As SUV doors would be opened by kids and adults, we were forced to accept the boring door handles that a normal Lamborghini would not have. These look lifted straight off an Audi A3 and will please 12-year-old Jimmy as he jumps in the back, but it won’t look as sleek as it could have.

When it comes to family vehicles though, they’re generally “user friendly” and uncomplicated. Managing the automatic gearbox just to get moving was an unnecessary hassle. Engaging reverse is a large padded lever, moving into Drive required a flick of the steering wheel paddles and then Park was a dedicated button. This could be a lot simpler, and just created a level of confusion that is acceptable in a Lamborghini…but not a family SUV.

12. A wolf in sheep’s clothing or just plain confusing… 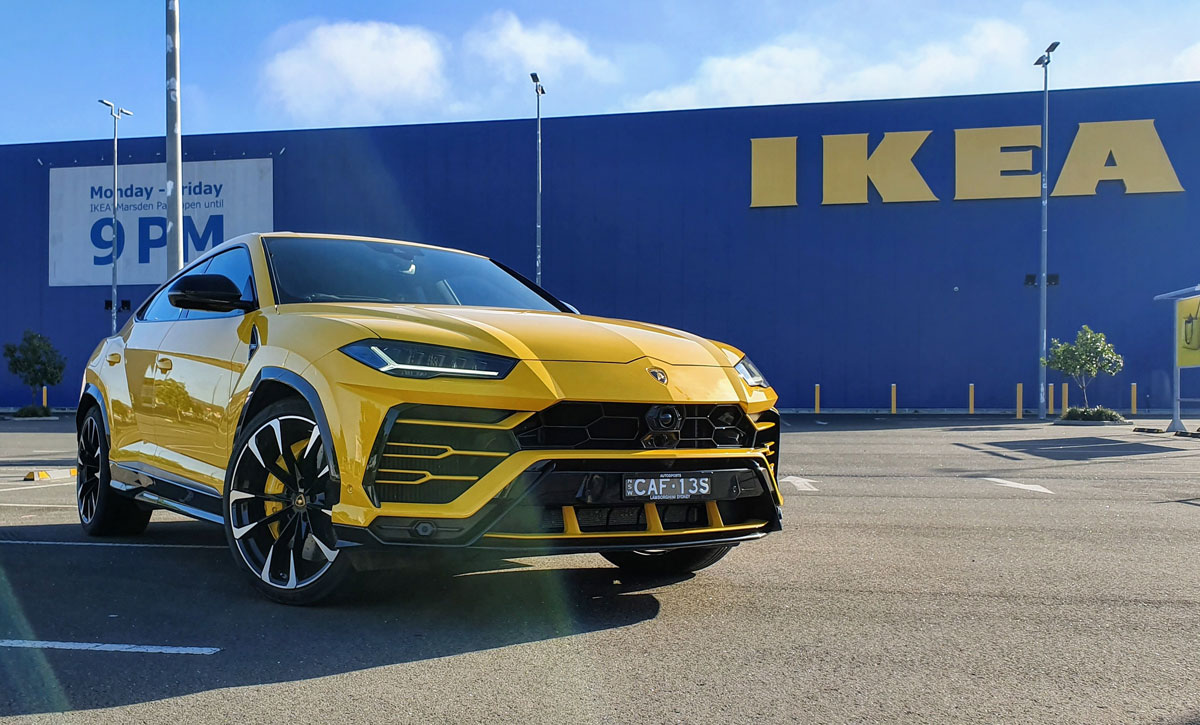 Lamborghini has done a wonderful job of mixing their supercar prowess with what is really a German SUV. It has lost a lot of its Italian flair along the way but at the heart still beats that of a raging Taurus. With the consolidation of car brands under large umbrellas it had to be expected that Lamborghini would look at the parts of other brands to produce the Urus.

It is in some ways unfortunate how much is lost by doing so, but also makes such practical sense that it is easy to swallow. For many, the price may be the biggest draw back as it can surpass that of a two door sportier Lamborghini. The way we see it, if you already own a Huracan, then the Urus is the best second Lamborghini you could buy.