The 2020 Formula 1 season is shaping up to be one of the most unique in recent history.

The two biggest global news stories have left their mark on F1: The Pandemic has seen seven of its rounds canceled (including the Australian Grand Prix in Melbourne), with many future rounds either postponed or up in the air. The Black Lives Matter movement has also left its mark: spearheaded by Lewis Hamilton, many drivers have taken a knee before races and spoken out about racism, both within the sport and more broadly.

But one of the other unique features of the season is how young the field is.

The 2020 F1 season driver lineup is one of the most youthful ever, with eight drivers under the age of 25 helming these insane cars: Charles LeClerc for Ferrari, Lance Stroll for Racing Point, Pierre Gasly for AlphaTauri, Esteban Ocon for Renault, George Russell for Williams, Max Verstappen and Alexander Albon for Red Bull… The youngest driver on the grid and one of the youngest in F1 history is McLaren driver Lando Norris, who’s only 20 years old.

These young guns represent a changing of the guard – their youth naturally infuses a different energy and attitude within the sport. This is best exemplified by Norris, whose most recent antics underscore this paradigm shift in F1 (as well as highlights his impeccable taste in timepieces).

After coming 8th in the Hungarian Grand Prix last week, the young Norris was spotted lending his McLaren teammates an extra hand stripping his car, getting hands-on with a ratchet under the vehicle. This moment of humility was contrasted with the $300,000 Richard Mille RM 11-03 McLaren Automatic Flyback Chronograph perched on Norris’ wrist.

Norris has quickly built a reputation for being a fierce competitor on the track whilst being charming and modest off the track. It’s not the first time the young Englishman’s offered to help out with non-racing duties for McLaren – he was spotted doing a tea run for Spanish F1 great Fernando Alonso at the 2018 United States Grand Prix.

As the name suggests, the RM 11-03 McLaren Automatic Flyback Chronograph was a collaboration between McLaren and Richard Mille, which sponsors the McLaren F1 Team. The highly technical timepiece features a case constructed from carbon and orange silica using Richard Mille’s innovative Thin Ply Technology method for layering carbon fibre. Orange is an iconic McLaren colour, and the watch is chock-full of design features that pay homage to the manufacturer. 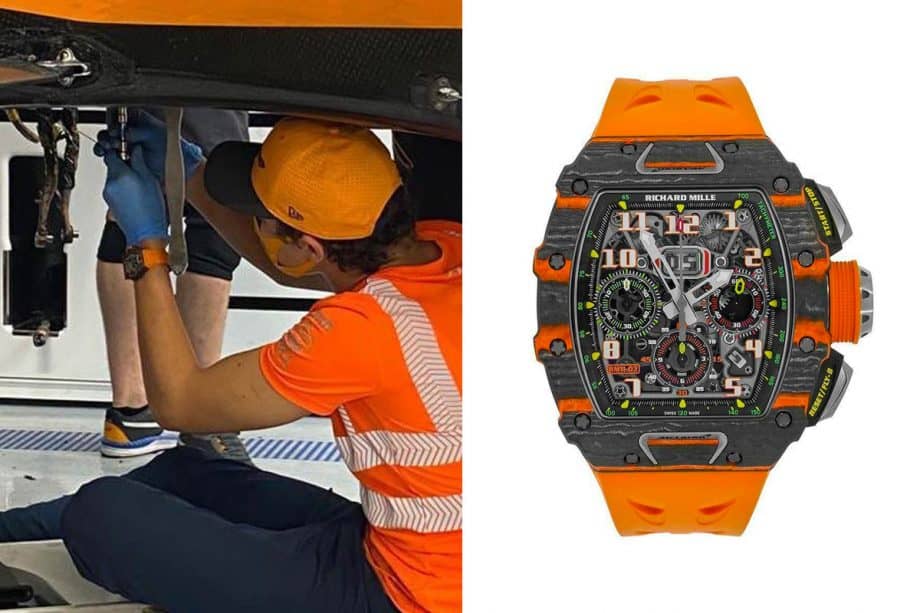 Despite being worth squillions and being able to enjoy the finer things like $300k timepieces, it hasn’t gone to Norris’ head. Indeed, wrenching on your own vehicle demonstrates a mechanical aptitude and humility that bodes well for the future of the sport.