Unless you’re living in a Mad Men era, where Don and Betty Drapers are lighting up like chimneys everywhere from the living room to the office cubicle, then you’d be fully aware that smoking is terrible for your health.

Apart from making you look (and smell) like a walking, talking ashtray, smoking can lead to a nasty bunch of life-threatening illnesses and diseases.

“It is well known that smoking causes emphysema, leading to chronic obstruct pulmonary disease (COPD)”, says Dr. Hui Chen, Senior Lecturer in the School of Life Science at UTS. For those who aren’t as up-to-speed on medical science, patients with COPD have significantly reduced lung function which means great difficulty in getting one of life’s most important tasks done: breathing.

If you’re a smoker, come wintertime and you’ll be more susceptible to colds and lung infections. You’ll be more prone to lung cancer, heart attacks and strokes (no surprise there), and ‘central obesity’, which according to Dr. Chen is where the fat tends to accumulate around the waistline. Smoking also leads to muscle loss, which combined with a fatter belly can mean an increase in diabetes – never fun for anyone.

Perhaps most pertinent to men, however, is the fact that smoking can decrease testosterone levels and affect sexual functions. “The chance of struggling with premature ejaculation is high with smokers,” says Dr. Chen.

Keen to avoid all of the above? Well, here’s how quitting smoking will affect you.

According to Dr Chen, the most prominent physical change when you quit smoking is everyone’s worst enemy: weight gain. “Some people use snacking to divert the temptation to puff on a cigarette. However, there is more to the story.”

The combination of coffee and cigarettes didn’t earn its reputation as ‘the supermodel diet’ for no reason. “Nicotine itself can suppress the appetite,” says Dr. Chen. This means that full-time smokers naturally tend to steer clear of fatty foods when they’re feeding a nicotine habit, but once the cold turley sets in, food is a former smoker’s main priority.

Unfortunately, it only gets worse. Apparently, nicotine is also pretty powerful when it comes to addiction. “Without it to satisfy the addiction pathway in the brain, junk foods like donuts and chips are used to make the pathway happy instead,” says Dr. Chen. “This is because the addiction to certain foods is controlled by the same pathway in the brain as nicotine addiction.” In fact, smokers who are trying to quit apparently seek junk food subconsciously, which means you’ll have little willpower when it comes to your 3pm chocolate cravings.

What goes up must come down, and like any drug, nicotine is a rollercoaster of emotion if you’re a smoker. “Nicotine in cigarette smoke can increase the release of happy chemicals in the brain, like dopamine and serotonin. This makes the smokers want more,” says Dr. Chen.

This comedown can be quite rough, resulting in crankiness (we’ve all felt the wrath of a smoker who is trying to quit). “The craving for a cigarette can also make people anxious and stressed.”

According to Dr. Chen, some smokers claim that lighting up can make them work more efficiently, but scientific research suggests the exact opposite. “Smoking can impair brain function, but quitting can definitely stop this effect.”

It’s not all bad news, magnificent bastards. Quitting smoking ain’t easy but it’s definitely conducive to you living a longer life. In fact, there’s a huge variety of health benefits from finally flushing that pack of smokes.

You could enjoy improved lung function and blood vessel health, improved physical and mental fitness, you’ll be less likely to get all sorts of cancers, and most importantly for those who care about their bank balance, you’ll be saving a lot of money.

According to Quit.org, if you smoke a pack of 20 cigarettes for an average $21 a day, you’d be saving almost $7,700 a year by quitting. That could get you 3 of these slick Dolce & Gabanna suits. Not bad.

So you’re finally ready to ditch the cigarillos. But how? While cold turkey might seem like the most badass Bear Grylls way to quit, it might not be the best option. “Using nicotine replacement to gradually wean from the nicotine addiction is a gentle way to quit smoking,” says Dr. Chen.

“At the same time, getting into the habit of regular exercise is beneficial as exercise can also increase the happy chemicals in the brain and at the same time prevent weight gain due to increased eating.”

If you’re still struggling, there’s always the option of channeling your inner Leonardo DiCaprio and going for a stylish e-cigarette, but be weary. “Although they’re not completely naive in terms of toxic chemicals in the vapour, they do contain much less toxins and smokers do have improved lung function after they switch to e-cigarettes,” says Dr. Chen.

So there you have it. Quitting smoking does sound like a pain in the arse, but if it means you’ll live longer and your girlfriend won’t have to keep kissing an ashtray, we say it’s definitely worth it. 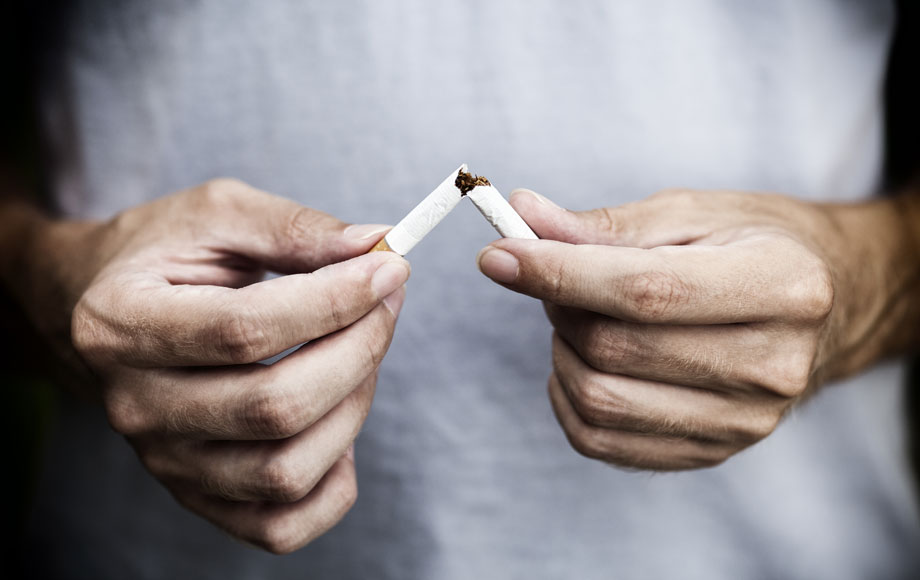