Rafael Nadal is one of the best tennis players of all time. The indomitable Spaniard, known as the ‘King of Clay’ due to his dominance on clay courts (like those found at the French Open) might be pushing 34 but has shown no sign of slowing down.

He’s also considered royalty in the watch world, thanks to his decade-long association with ultra-exclusive high-end watch brand Richard Mille. Despite Nadal’s initial hesitation to wear watches on-court, Mille and the Mallorcan have grown to have a particularly fruitful relationship. Nadal’s ultra-light signature models feature a unique combination of style, performance and versatility – not to mention they’ve become some of the most coveted (and expensive) watches in the world.

Ahead of the 2020 French Open, Nadal’s debuted yet another Richard Mille creation – the RM 27-04, perhaps the most unique (and innovative) Nadal signature model yet. 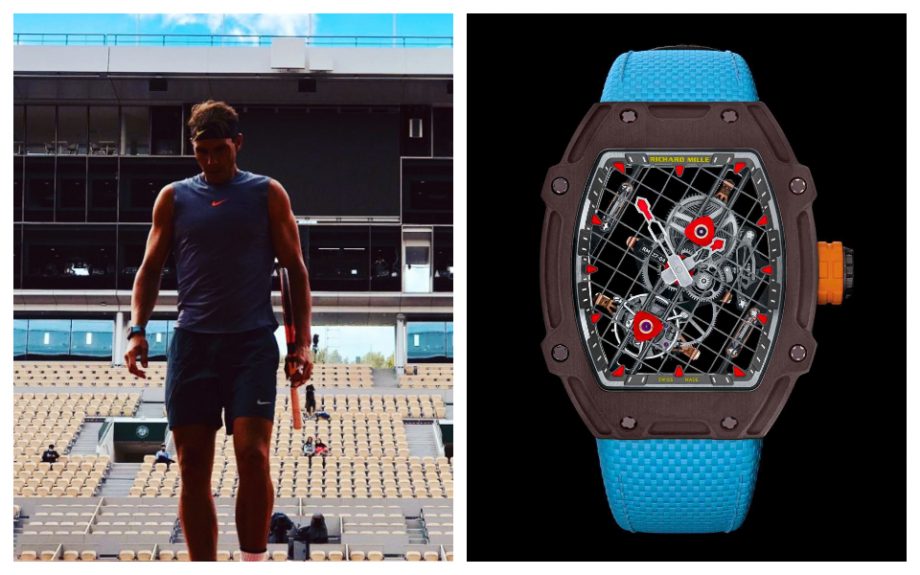 Limited to only 50 pieces and worth an estimated $1.2 million, this manual-winding tourbillon movement masterpiece features an avant-guarde design that fits perfectly with Nadal’s profession.

Instead of a dial, a single woven steel cable is strung across the interior of the watch, both aesthetically and literally like the way you’d string a tennis racket. The movement is then suspended from the mesh under high tension, apparently capable of withstanding accelerations of over 12,000G’s: a new resistance record at Richard Mille, according to the manufacturer. A skeletonised titanium baseplate underneath supports the structure.

Richard Mille is known for its use of novel materials in their watches, and the RM 27-04 is no exception: the case is made from a brand new material exclusive to the brand called TitaCarb. A material made from polymer reinforced by carbon fibre, TitaCarb is tough and light. Similar materials are used in the automotive and aerospace industries.

It’s the perfect watch for a high-octane tennis superstar like Nadal, who’s sure to wear it during all his matches this year.

The French Open – also called Roland Garros, after the stadium where it is held in Paris – is one of the four Grand Slam tennis majors, along with the Australian Open in Melbourne, Wimbledon in London, and the US Open in New York. Roland Garros is unique among the tournaments as the only one played on clay, unlike Wimbledon’s grass or the US’ / Australia’s hard courts.

Nadal holds a record 12 French Open titles, a record he’s keen to further bolster: he’s set to play his first match of the French Open later today against unseeded Belarussian 27-year-old Egor Gerasimov on Court Philippe-Chatrier. Nadal’s section doesn’t have any stand-out rivals except for Japanese world #35 Kei Nishikori, which Nadal may face in the third round.