Push that little ‘R.S’ button on the centre console and it will change your life. Okay, maybe we’re being slightly dramatic. But it’s the way the Renault Megane RS seamlessly switches between docile city-centric roller and a bright orange ball of fire on wheels that gets our emotions flooding.

For a week we got to put the latest 2018 Renault Megane RS through its paces in road trip mode, city traffic mode and our favourite, race mode. With little expectations as to how the French carmaker’s latest hot hatch would hold up against such a competitive market that includes the new Honda Type R, Hyundai’s i30N and VW’s Golf GTI, we can only say that this car deserves to be at the pointy end of that group thanks to its sensational engine, sure-footed driver feel, daily drivability (even in manual) and striking design. 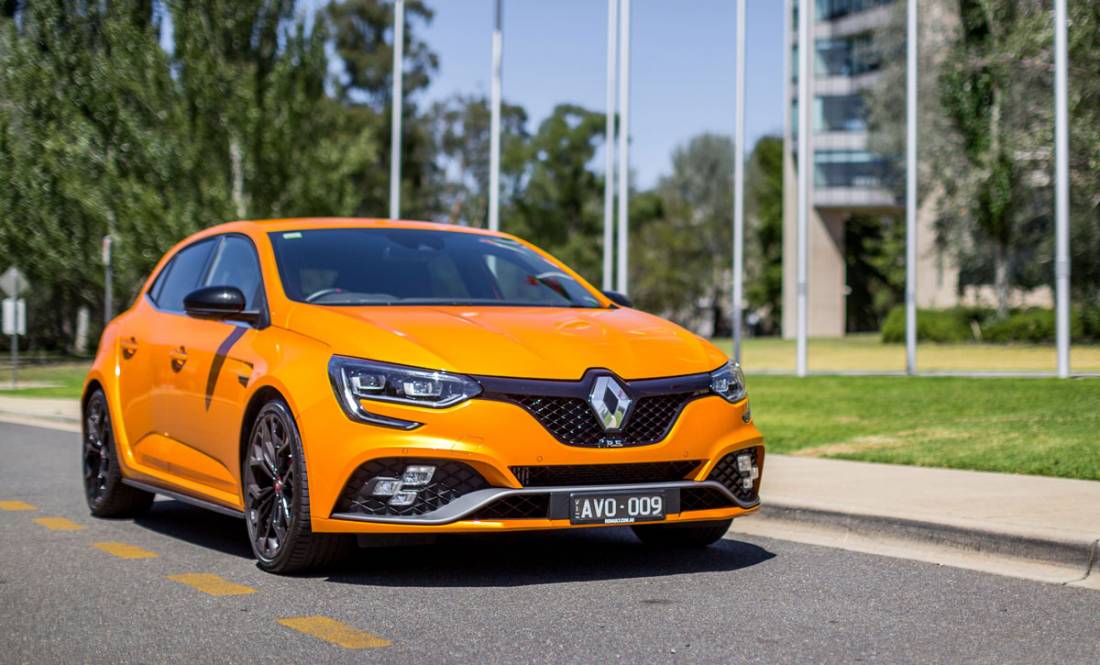 Hot hatches these days tend to be in a contest of their own when it comes to standing out. They need to be based off their more vanilla base-model sibling, but they also need to exhibit the ‘boy racer’ aesthetic that the segment demands. And sometimes this turns out very wrong (Honda Type R) and sometimes it turns out very right – in this case, the Megane RS. The car’s design takes the conservative lines of the standard Megane and adds girth to the front and rear thanks to pumped fenders that gives this car so much presence even when it’s not moving. We know this because we watched people staring at it as they walked by.

2. The car never looks like it’s an afterthought design 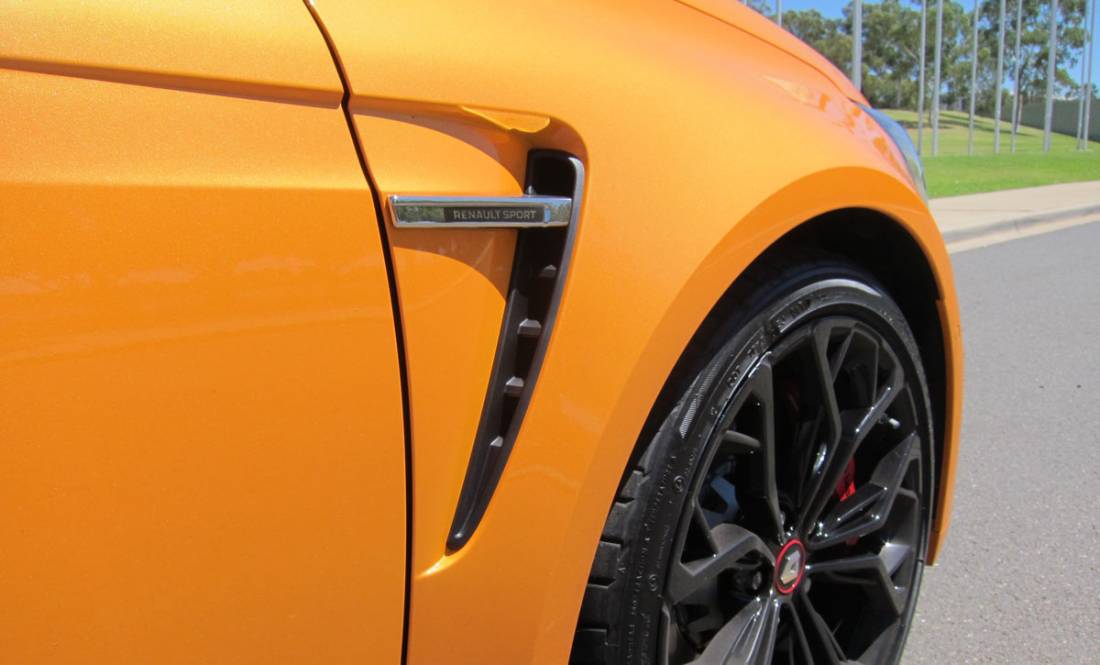 Sticking wider 60mm and 45mm composite panels to a car that runs on 19-inch wheels with big brakes can often look aftermarket. On the Renault Megane RS this is not the case. Lines and vents flow into one another and everything looks like it’s designed to be there. What’s the big deal? For a more mature enthusiast you won’t feel out of place as the car looks more like a gentleman’s hot hatch when compared to its competition. 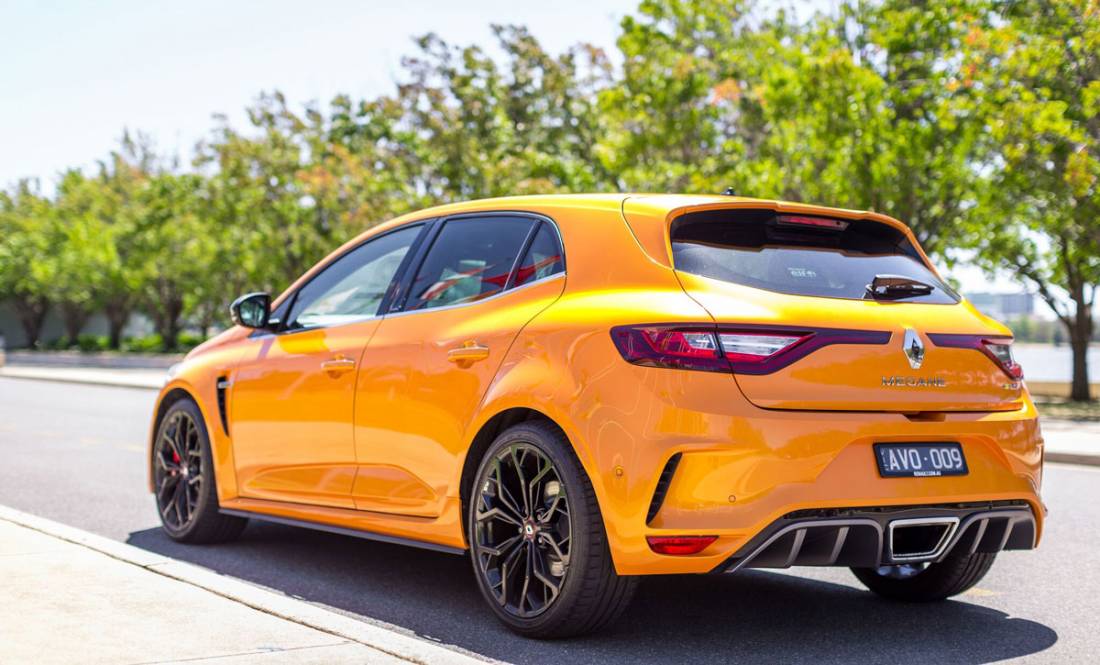 4. So much joy from such a small engine 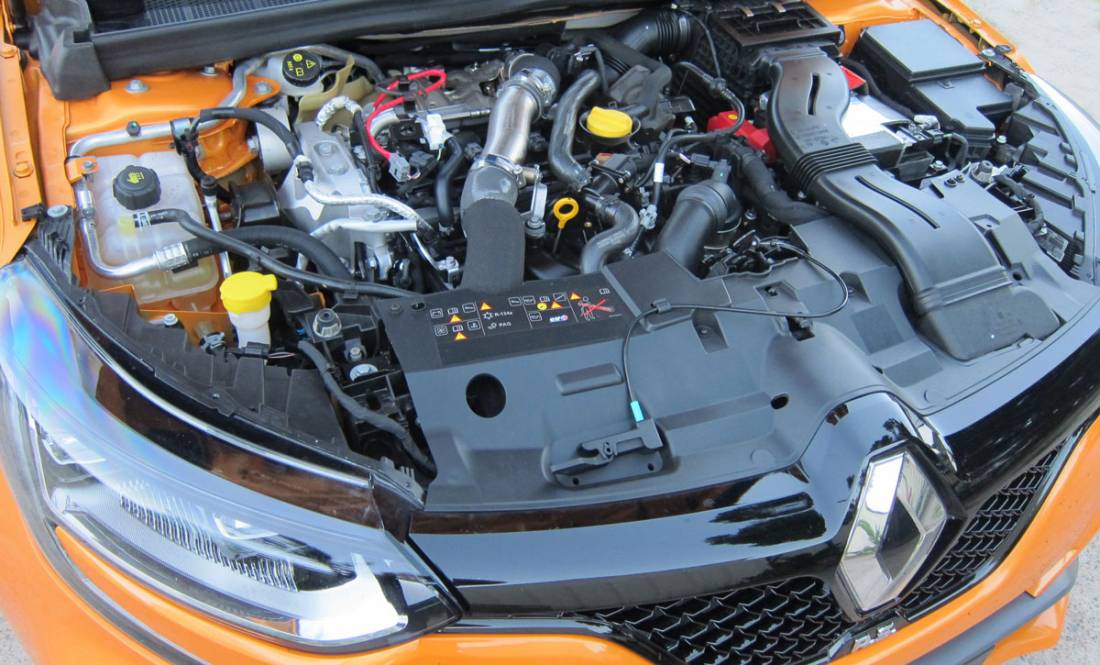 The Megane RS punches well above its weight and that’s thanks to a razor sharp chassis and a bloody sensational engine that’s been turned all the way up in the ‘fun’ meter – and this isn’t even the hardcore Megane RS Trophy model yet which arrives later this year. The power delivery from the 1.8-litre turbo is smooth and builds up continuously. Above 4,000rpm it really comes alive with exhaust pops and a rush that will put a smile on your face. We suggest you keep both hands on the wheel though when the power comes on.

5. It changes personalities at the push of a button 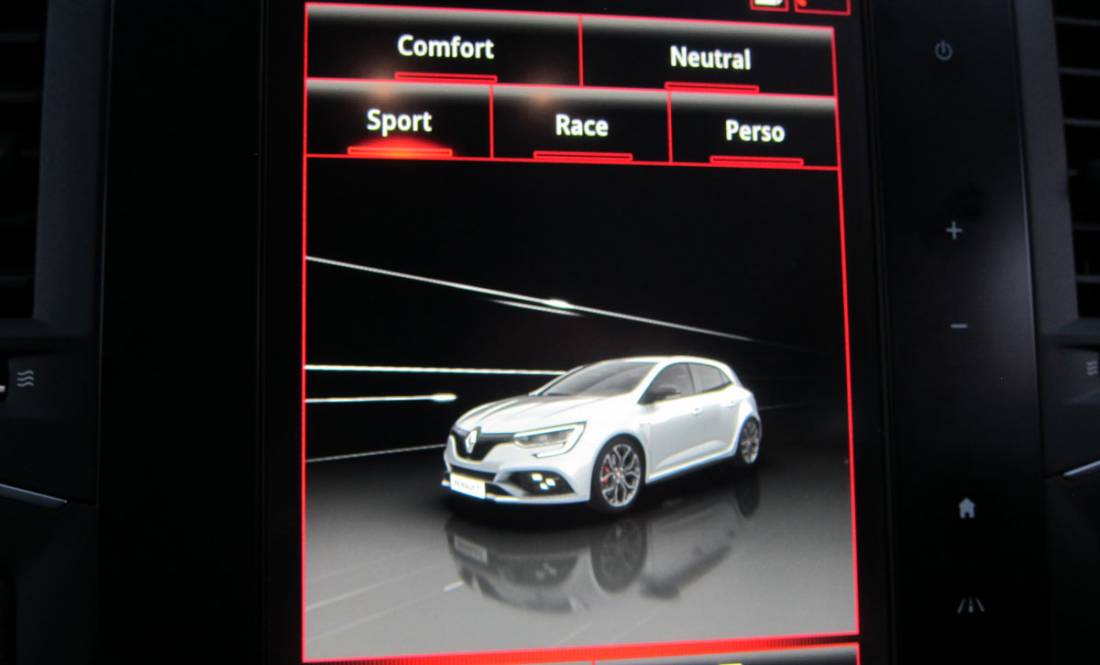 That little ‘RS’ button we mentioned earlier is your gateway to hot hatch heaven. What that means is that below 4,000rpm and in comfort or neutral mode, the car simply rolls around town like a docile city car and is, dare we say, efficient. No loud noises, no harsh suspension ride. It’s a common feature amongst many sports cars these days but in the Megane RS it just feels more welcoming and usable as a daily car. A big tick. And there’s also funky ambient lighting inside the car which correlates to the drive mode you’re in.

6. Focused interior with just a few minor things to pick on 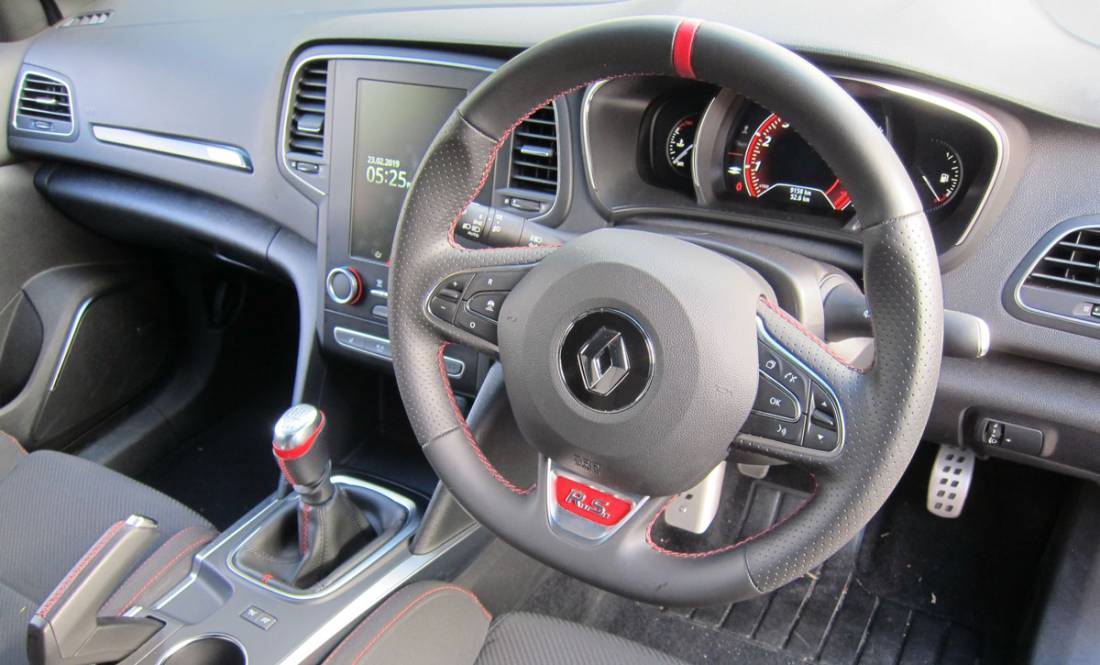 I’ve always loved the interior quirks of hot hatches. It’s like a mix of race car and economy car design which makes you giggle at times. The good thing about the Renault Megane RS is that it gets most of it right. There’s an amazing steering wheel that feels grippy and luxurious in your hands thanks to perforated leather complete with obligatory red strip for track drivers. There’s also the three pedals which are placed close to one another making for some great heel-toe downshift action (there’s no automatic rev-matching in this car – and rightly so, in our opinion).

7. We’re not fans of the gear knob 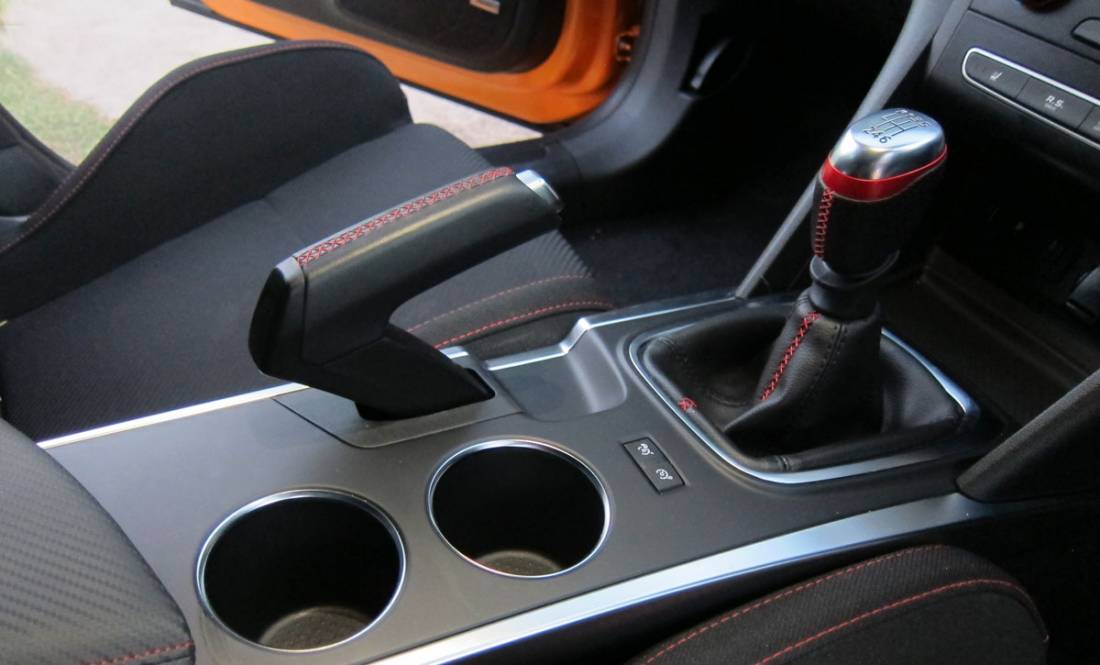 They got the six gears part right but Renault might have gone a bit overboard with the gear knob which is wrapped in leather, plastic, then another layer of satin chrome plastic on top. It looks cool but when you grab it it can make a squeaky noise which sounds a bit cheap. An all alloy or fully leather wrapped knob would have sufficed for something that is always touched. Either way it’s minor considering you’ll hear the sweet engine note most of the time.

8. There’s an odd combination of hard and soft plastic 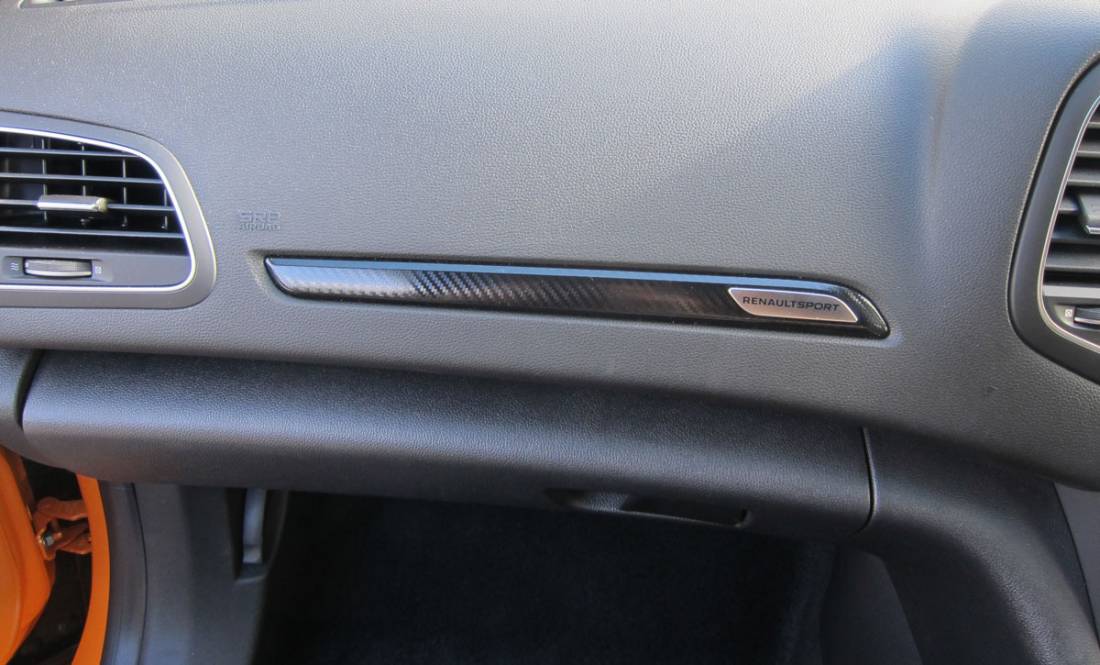 We noticed that the Megane RS had harder plastic on the bottom interior section and softer nicer-to-touch plastic on the dash. It could be an attempt to keep the cost competitive with other hot hatches, but we would have loved to have more of the nicer stuff throughout the interior – it is the range-topping Megane after all. Also, faux carbon trim – you’re either a fan or not. We’d probably do without it.

9. There’s a lack of buttons on the entertainment system 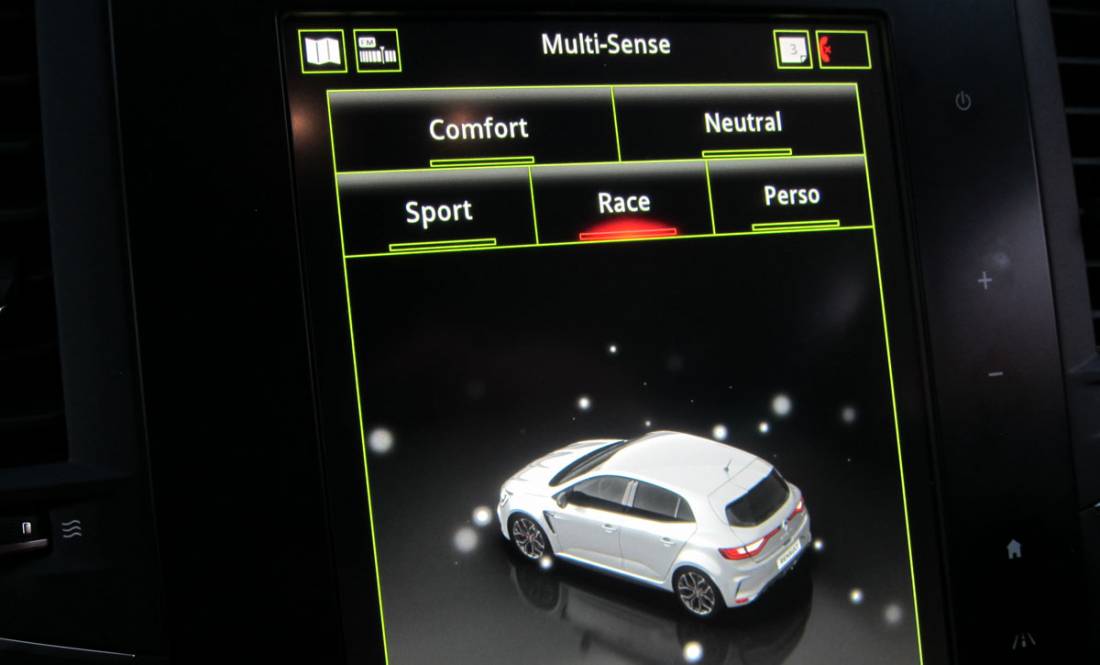 It’s they way of the future we suppose but even something as simple as toggling between Apple Carplay and the navigation system can be a task when there’s no tactile buttons to mash. In the RS it’s just one big touchscreen with a few buttons on the side. Most of the car’s settings and controls are done via this touchscreen and it’s hard to mess with when you’re driving. In other words, you’ll need to stop and look before you press. Not a bad thing perhaps, but it does take some getting used to. 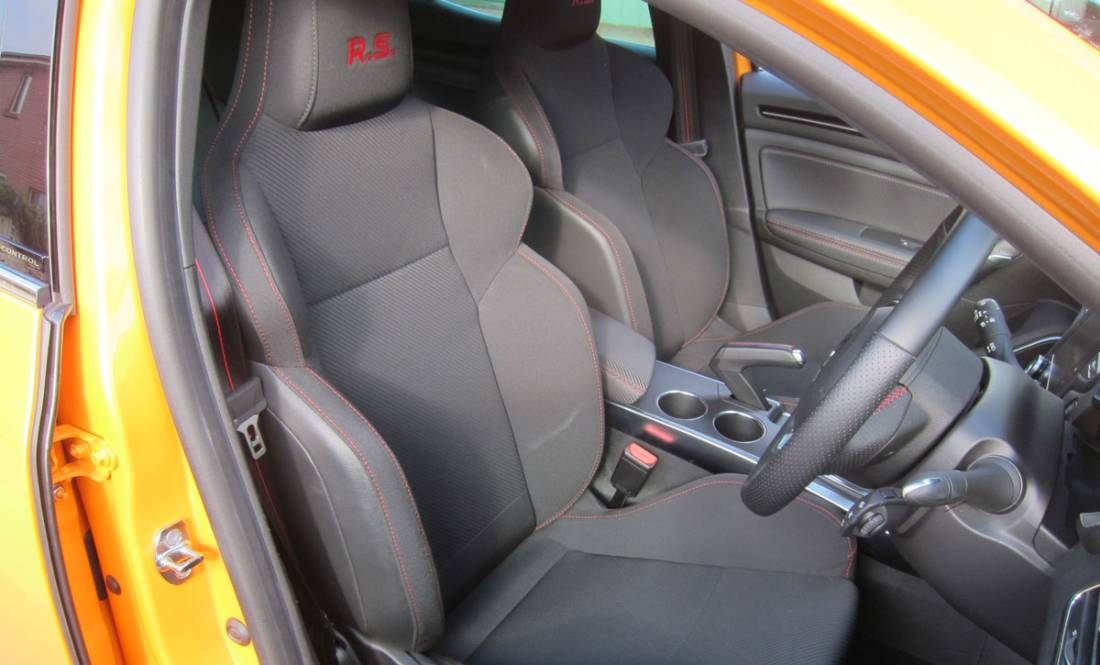 Apparently you can get grippy Alcantara inserts in the bucket seats, but our car didn’t get it. Nonetheless the French carmaker did an amazing job of creating a great seating position which places the driver low in the car but with enough scope for good vision in both spirited and normal driving conditions. There were zero issues with blind spots and seeing over the bonnet.

11. It’s more practical than you think 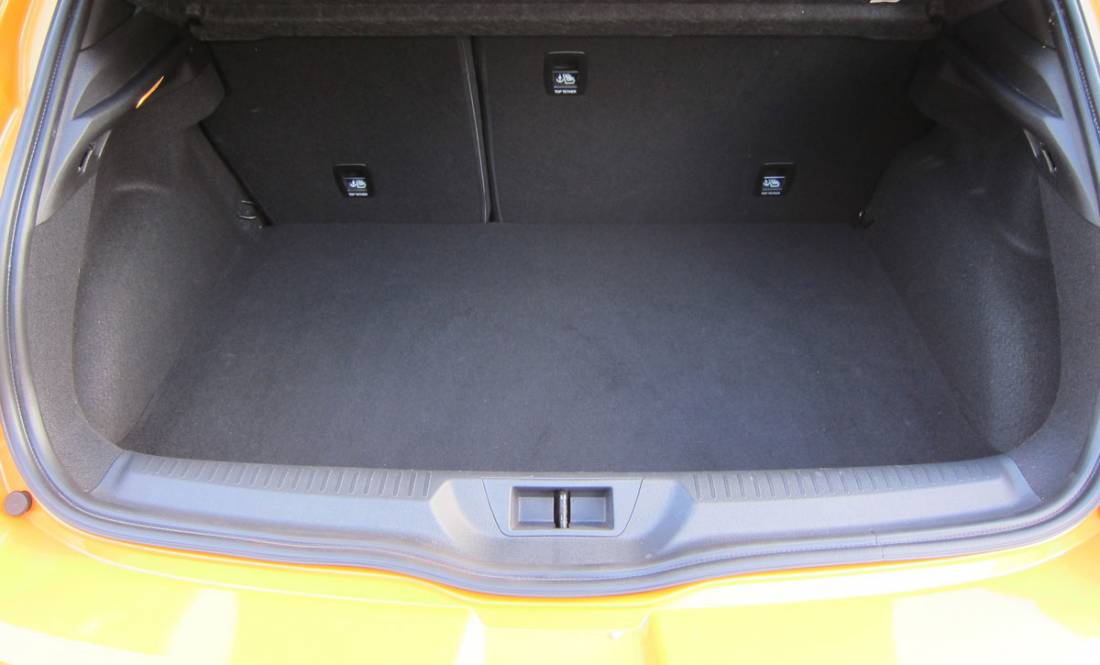 You know Renault is going after a bigger slice of the market when the RS comes as a four-door model (previous generations were two-door) and adds an automatic option for the first time. It might lose some of its appeal to traditionalists, but for current buyers its a win. Substantial boot space, ample rear seating and four-doors means the Megane RS is as user-friendly as it is fast. 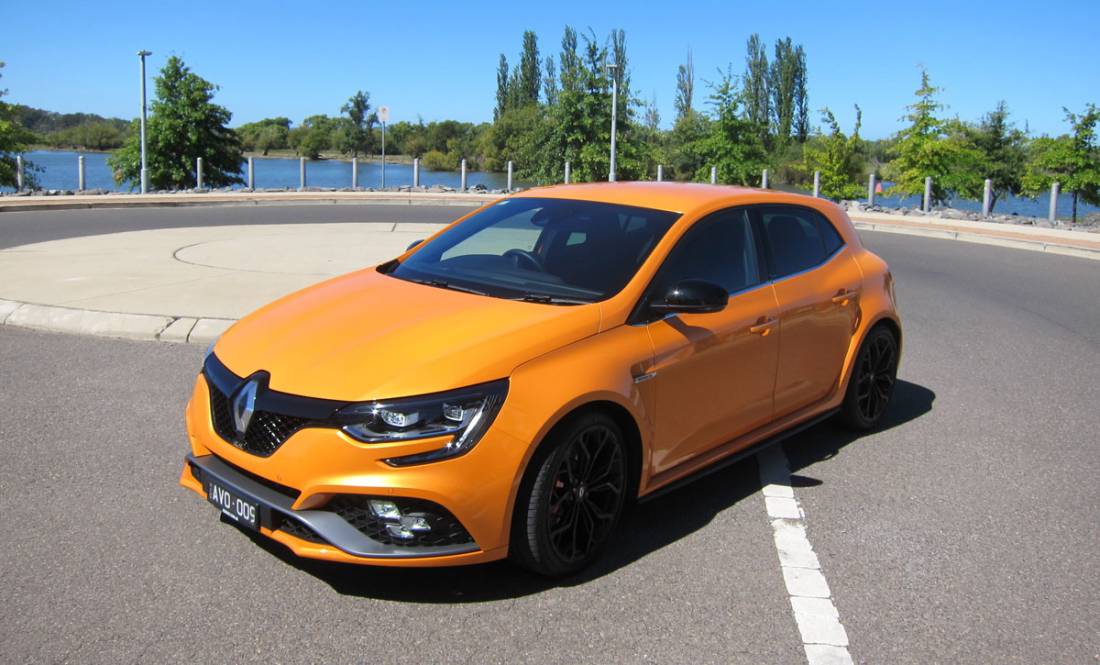 We’ll admit we were a bit worried when we noticed there was no adaptive suspension option for the Megane RS. Our worries were soon put to ease once we drove it. The car’s suspension is so well tuned that it doesn’t even need it. It’s super refined on daily/harsh surfaces, rides over potholes without breaking your spine and is effortlessly responsive around the twisties. How Renault pulled this off with 19-inch wheels and low-profile tyres is beyond us (it felt better to drive than my own Golf R with adaptive suspension). Two words sums it up: Responsive and compliant. 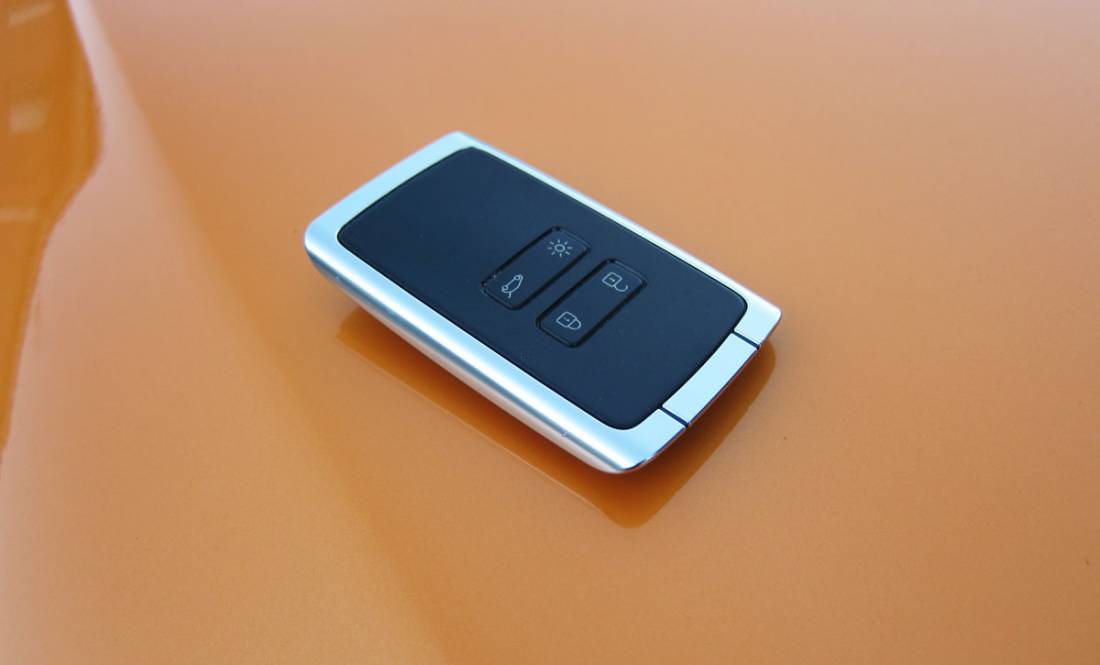 It’s not something most would take note of but we absolutely loved this credit- card style key fob for the Megane RS. Besides its keyless entry functionality, it fits nicely into any pocket without unsightly bulges. It’s also a surprisingly elegant appointment for a hatchback.