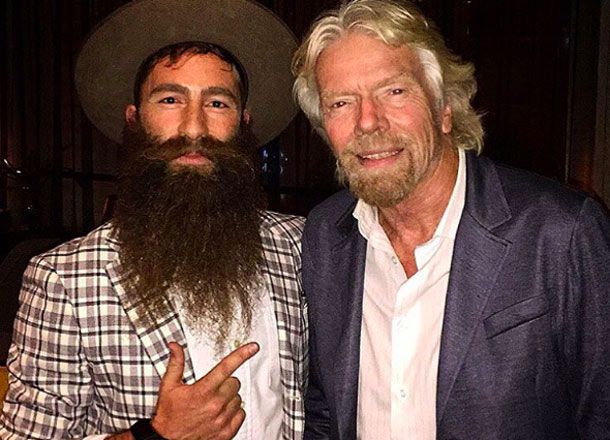 What do you do when you come face-to-face with billionaire icon Sir Richard Branson? Ask him to grow his beard, of course. Well, at least that’s what This Is Beard Season founder Jimmy Niggles did when he met the English business magnate last week.

In fact, Branson is the latest ambassador for This Is Beard Season, the Aussie organisation turning seriously impressive beards into life saving conversation starters to challenge the world to book a skin check for melanoma.

Niggles’ idea for This Is Beard Season was inspired by long-time friend Wes who tragically lost his battle to an aggressive form of cancer caused by melanoma in 2010 at the young age of 26.

“We were literally at Wes’ wake, and there were these old farmers in the corner of the bar who had amazing big farmer, wizard beards and we wondered why nobody our age were rocking beards anymore? This was 6 years ago, and nobody was growing a beard our age or younger, so we threw the idea around and thought growing a beard takes a fair bit of commitment…the same kind of commitment you need to go and get a skin check,” says Jimmy.

Today, Beard Season passes on the message through a dichotomy of personal interaction and social media. By simply meeting people, starting a conversation, and feeding those encounters through the Beard Season Instagram page, Niggles has seen the campaign gain incredible momentum and take on a wooly-faced life of its own.

Most recently, Beard Season took to the Australian Open of Surfing where an expert team from WA checked 116 peoples skin. “Out of those we found five Stage 2 melanomas – which is pretty much when you need to go straight to the doctor – and 29 early stage, or pre-cancerous, BCC melanomas. Nearly a third of everyone who got checked…it’s crazy.”

Now that the Beard Season phenomenon is a registered not-for-profit and generating a huge following overseas, Niggles has a new goal – the Million Dollar Beard.

“I want to sell my beard for a million dollars. I got to a point where I thought I can’t just shave it off tomorrow…it’s got such a big story now. I figured if I can sell my beard – take it off, put it in a glass case intact, along with all the stories of all the people it’s helped saved – then that would be a great way for a company or a philanthropist to come on board and help us take the next step”

So until Branson gets across the line with Beard Season, all Niggles asks is that you “Tag friends and family. Help us spread the word. Grow a beard if you can. It might just suit you. It’s a bit of a hair-brained idea but it’s working.”