Australia has a habit of claiming other countries’ citizens as our own, especially when it comes to actors. Sam Neill, Mel Gibson, Hugo Weaving… But one man we’re particularly shameless about claiming is Russell Crowe, who might just be the most Aussie non-Aussie on the planet.

Not only has ‘Rusty’ lived most of his life in Australia (indeed, he lives in Sydney and owns multiple properties across the country) but he’s given millions of dollars to Australian charities and owns a substantial stake in the NRL’s South Sydney Rabbitohs. He even had a short stint on the iconic soap opera Neighbours – how much more Aussie can you get?

Something else that makes him quintessentially Aussie (although you could just as easily argue it’s just as much a Kiwi trait as well) is his down-to-earth nature. Case in point: this heart-warming interaction he had with a fan on Twitter yesterday.

After writer and watch nut Daniel Gullotta guessed what timepiece Crowe was wearing in 2020 action thriller Unhinged – a Shinola Runwell Chrono – Crowe jumped in to confirm Gullota’s call, sparking off a wholesome exchange that’s delighted fans all over social media.

Celebrity watch-spotting is an underappreciated, thankless art. To have the celebrity in question chime in and confirm one’s educated guess, as well as actually have a bit of a conversation with you, is a truly rare occurrence – and one that speaks volumes about Crowe’s humble character. He’s just a good bloke.

Founded in 2011, Shinola is a Detroit-based watch and luxury goods brand that was created with the intention of reigniting the American tradition of watchmaking and bringing jobs back to Detroit. While their watches are assembled in the United States, they use Swiss movements provided by Ronda (who also provide movements for brands including Baume & Mercier, Eterna and TAG Heuer).

The Runwell was the very first model Shinola ever came out with and is available in a wide variety of sizes, materials and complications. Crowe’s is a 47mm chronograph model that almost looks like Shinola stuck an IWC Big Pilot and a Chopard Mille Miglia in a blender. 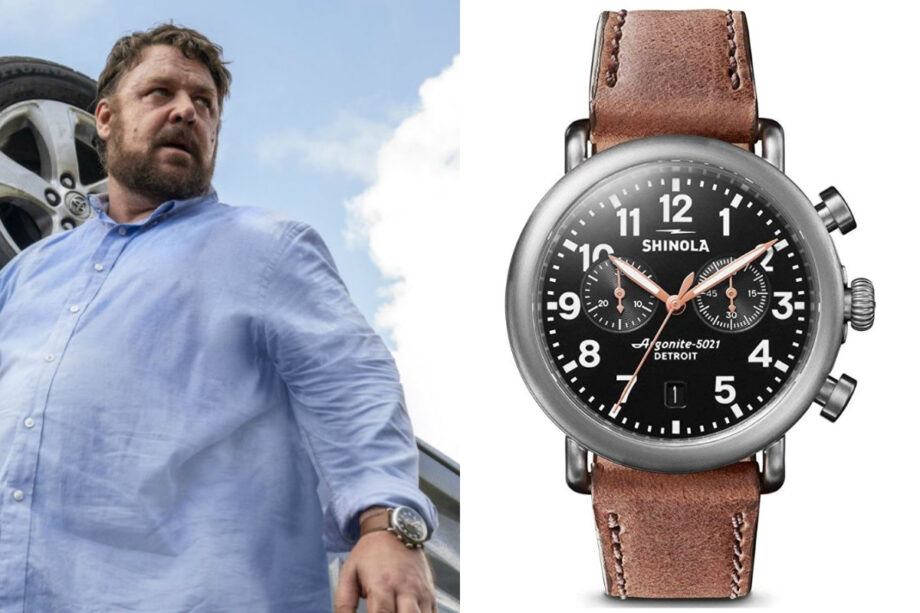 Unhinged tells the story of a single mum (played by Caren Pistorius) who is terrorized by a seemingly mentally-ill stranger (Crowe) following a road rage incident. Crowe seriously packed on the pounds to play the antagonist, Tom Cooper – a role that he absolutely nails, quite ironically. Ol’ Rusty used to be known for his short temper, so the fact that he’s happy to play such a role shows that he’s got a sense of humour. Very meta.

Crowe is also set to appear alongside fellow Aussie-ish actor Sam Worthington (born in England!) in horror film The Georgetown Project, which is currently in post-production.