Numerous actions can cause havoc on a plane. From passengers showing off their guns mid flight to screaming hysterically because their nuts were served in a packet rather than on a plate (true story), you might have thought you’d seen it all.

We’re here to tell you that’s not the case: one Ukrainian woman’s actions have just propelled her to the top of this absurd category of aviation literature (and seen her banned from all future UIA flights in the future).

Apparently frustrated by her Boeing 737’s tarmac wait time, the woman did what we all fantasise about doing when faced with a lengthy technical glitch or traffic controller stuff up – hop out the emergency exit to take some sun on the wing.

CNN Travel reports, “A minute-long video has emerged of the woman, dressed in a white top and light pink trousers, hanging out on the wing in front of stunned onlookers at Boryspil International Airport in Kiev, before being summoned back on board by the airplane’s crew.”

“The unidentified passenger, who was traveling on a Ukraine International Airlines flight from Antalya, Turkey to the Ukranian capital with her husband and children, was reportedly overheard saying she was ‘too hot’ and needed to cool down.”

Unfortunately, her desires weren’t quite in line with UIA’s health, safety and security regulations, and the woman has been banned from all future UIA flights (the incident took place on August the 31st). 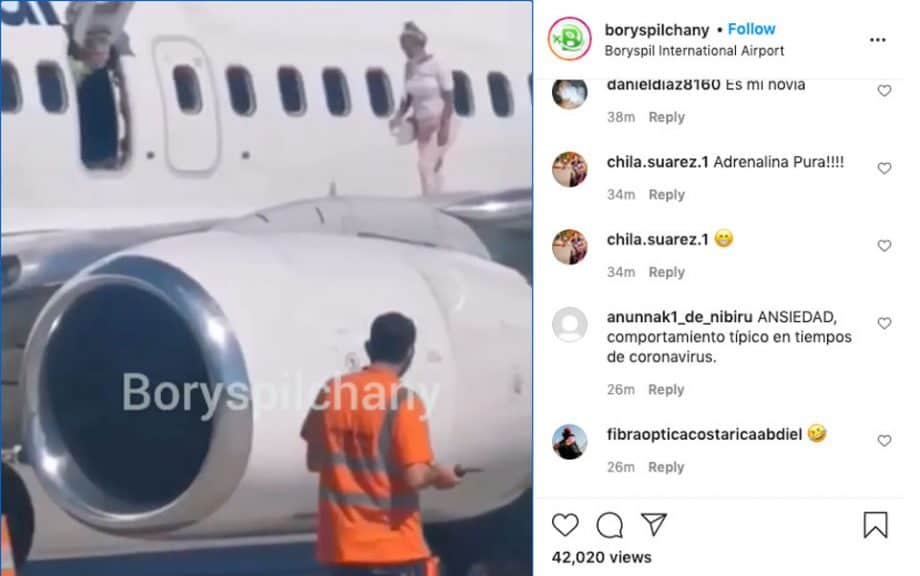 In a statement, UIA said airport security, police and doctors attended the scene, and it was determined the woman “was not under the influence of alcohol and/or drugs.”

The statement also criticised the woman for setting an inadequate “parental example,” and stated she may be subject to “an exceptionally high financial penalty in the form of a fine.”