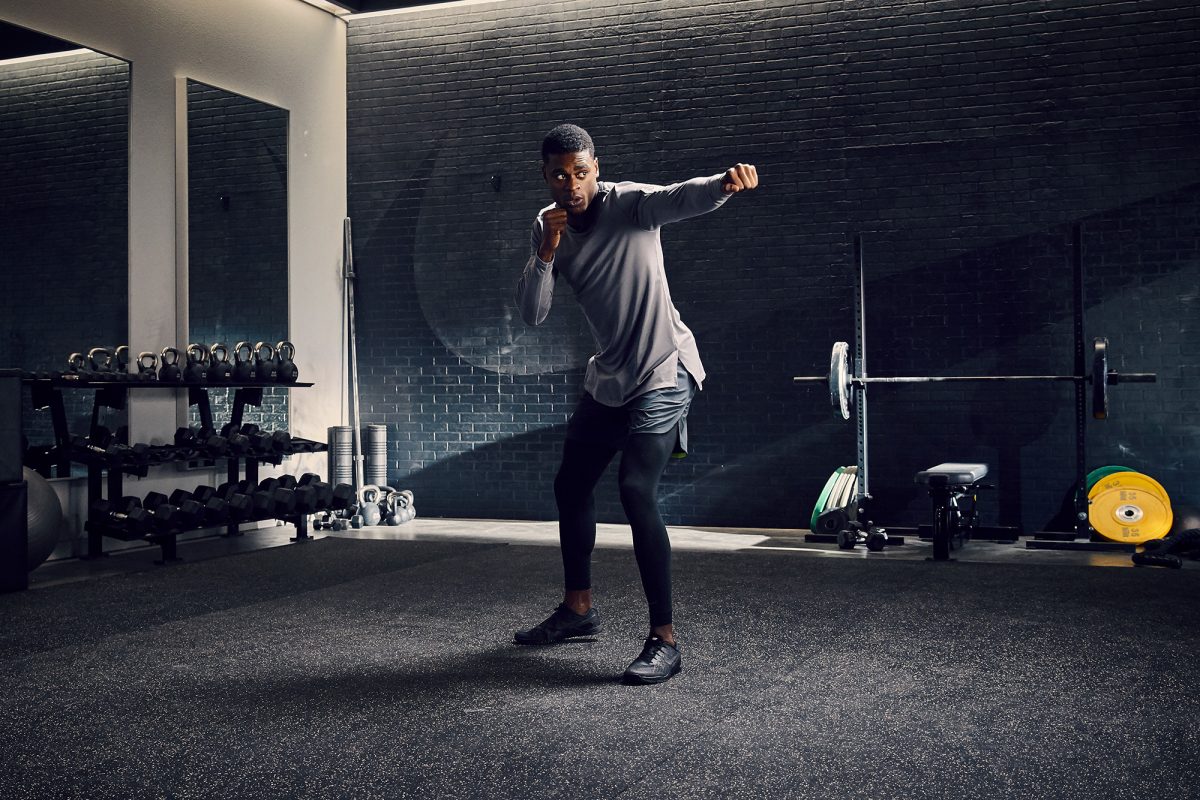 “Heading to the gym” is quite a broad term. It can mean anything from stationary cycling and CrossFit to circuit training and weight lifting. Many people rock up to their sessions a little underprepared, normally with a pair of running shoes that aren’t up to the task ahead. You wouldn’t head to soccer practice with a pair of ice skates – so why is going to the gym so different?

Choosing the correct footwear for gym activities is pretty important when you consider things like posture and injury when you’re spending a long time on your feet. Running trainers may feel like they are doing the job initially, but long term you’ll feel the damage.

Fear not, however, as there are plenty of pairs of gym shoes on the market that are made specifically for regular gym workouts. There are designs with sturdy soles that improve your balance and posture when lifting weights, lighter creations for intense CrossFit sessions and even a few hybrid numbers that are practical whatever you get up to within your gym’s four walls.

So, figure out what style of workout you perform most regularly and invest in a decent pair of gym shoes to help you perform to your very best.

What should I look for in gym shoes?

Your gym shoes must be stable, with the right mix of cushioning and support. Look for a cushioned shoe with a soft midsole to support the arch of your foot.

How often should I replace my gym shoes?

An exercise shoe is typically spent after five to six months of constant wearing. Cushioning deteriorates over time, so make sure to replace your pair regularly.

What are the best materials for training shoes?

Athletic sneakers must be made with strong, high-quality material that can handle a lot of pressure when you are flexing or squatting. For the upper section, the best choice will be synthetic leather or ripstop nylon. 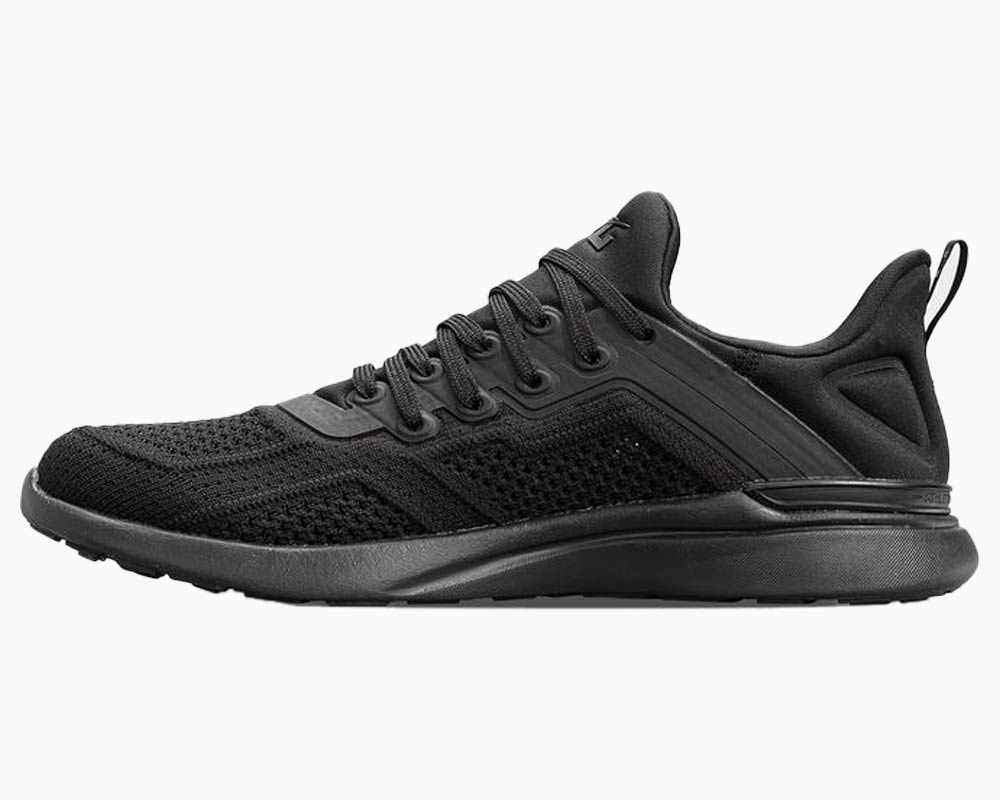 The wonderfully named Athletic Propulsion Labs cover that niche territory between luxury and performance. The Los Angeles brand was founded in 2009 by the Goldston twins, two siblings that don’t hold back when it comes to style and innovation.

Their TechLoom Tracer training shoe is actually the company's first. Engineered to be as comfortable as possible thanks to a moulded collar around the ankle and heel to provide optimum support. The combination of TechLoom forefoot and Propelium midsole give you stability and cushioning in all the right places, making them the perfect candidate for your next gym shoe.N
Shop Now 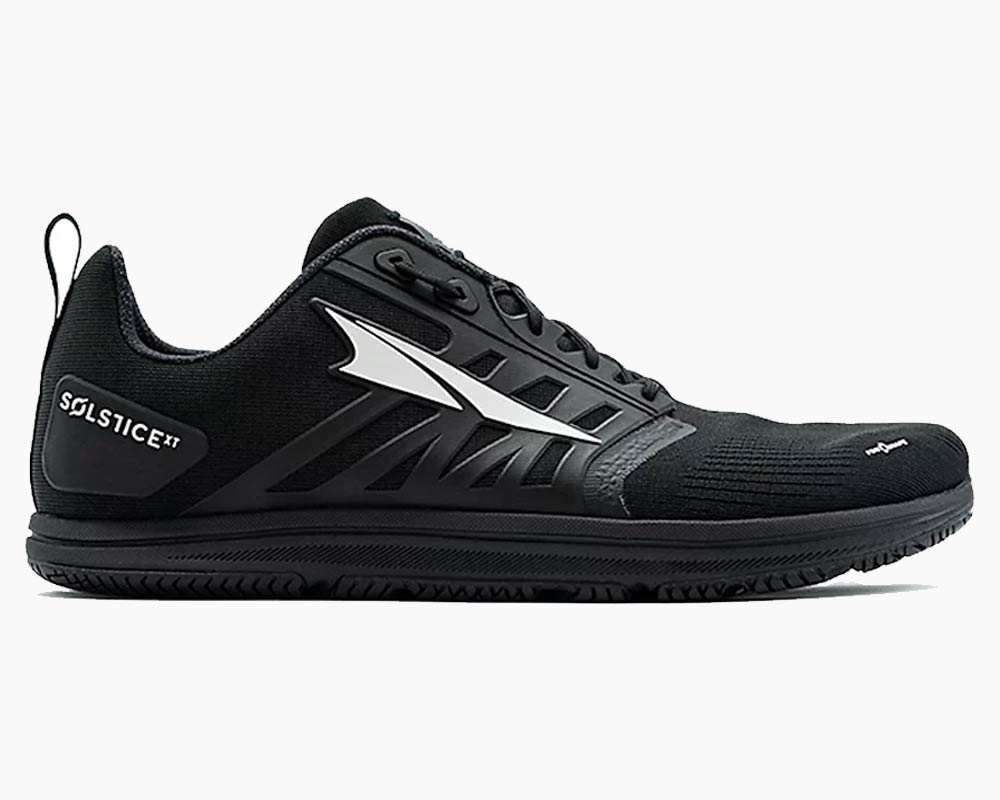 Altra Running was founded on the premise that runners could benefit from wearing a shoe that kept the toe and the heel at the same distance from the ground, as opposed to other shoes increasing the height of the heel. The design has proven incredibly popular with runners, and Altra has now applied the same premise to shoes for other disciplines too.

The Solstice XT are designed for use in the gym. Taking the FootShape design and adding a durable caged upper to help keep your feet stable, along with some cushioning to absorb shocks. The rubber outsole works both in the gym and on runs, making them a truly versatile pair of gym shoes.
Shop Now 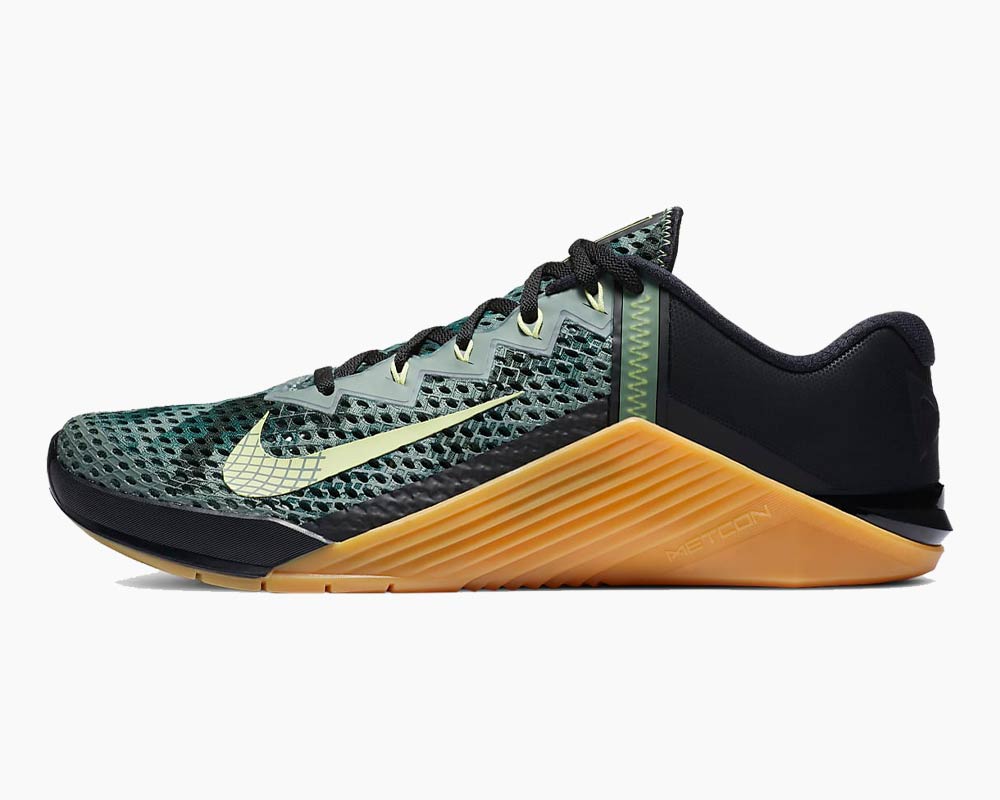 Nike really needs no introduction. The biggest brand in sports, Nike has been helping athletes of all levels achieve their best performances since its founding in 1971. Nike is constantly researching and developing new materials and designs to further assist you within whatever sporting discipline you participate.

The Metcon 6 is the latest iteration of Nike's high-performance training shoe. Claiming to be the most breathable version yet, your feet will stay cool (keeping your body cool in the process), while a solid and stable base, including a wider heel, will help you to lift heavier weights. They're pretty good-looking too, as expected, and can happily be worn outside the gym.
Shop Now 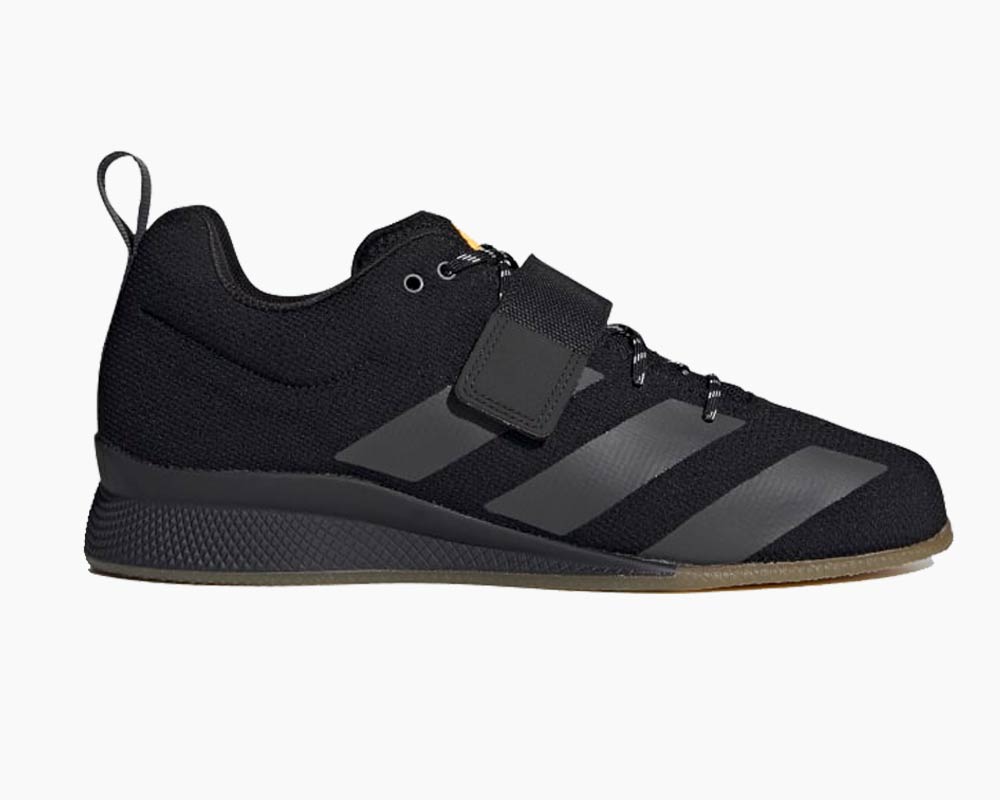 German sportswear manufacturer Adidas has tried its hand at just about every sport that is practised by more than ten people on the planet. They were one of the first brands to bring in straps for weightlifting shoes, to help fight against foot movement and ultimately reduce injury for amateurs and professionals.

These Weightlifting 2 Shoes are a modern take on this technology, combined with a look that will dazzle other gym-goers. They feature a breathable upper sock that helps promote natural movement, along with a non-compressive sole for support under heavy loads.
Shop Now 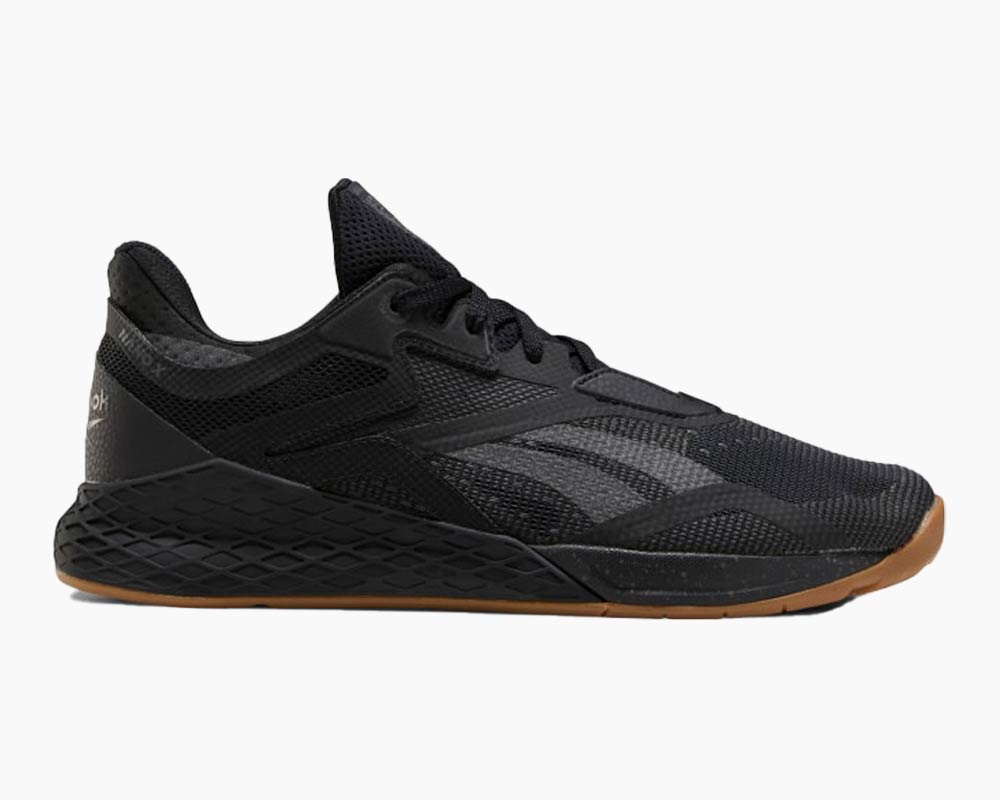 For a brand that was created in the grim industrial north of England, Reebok hasn’t done badly for itself. From high-performance sportswear to street fashion trends they definitely have more than one string to their bow, and even create standout gym footwear.

The Nano X trainer is made for CrossFit sessions, but can equally find favour with regular gym-goers who partake in intense workouts. It features a Flexweave upper to help handle dynamic movements, along with midsole cushioning for short sprints or running on the spot.
Shop Now 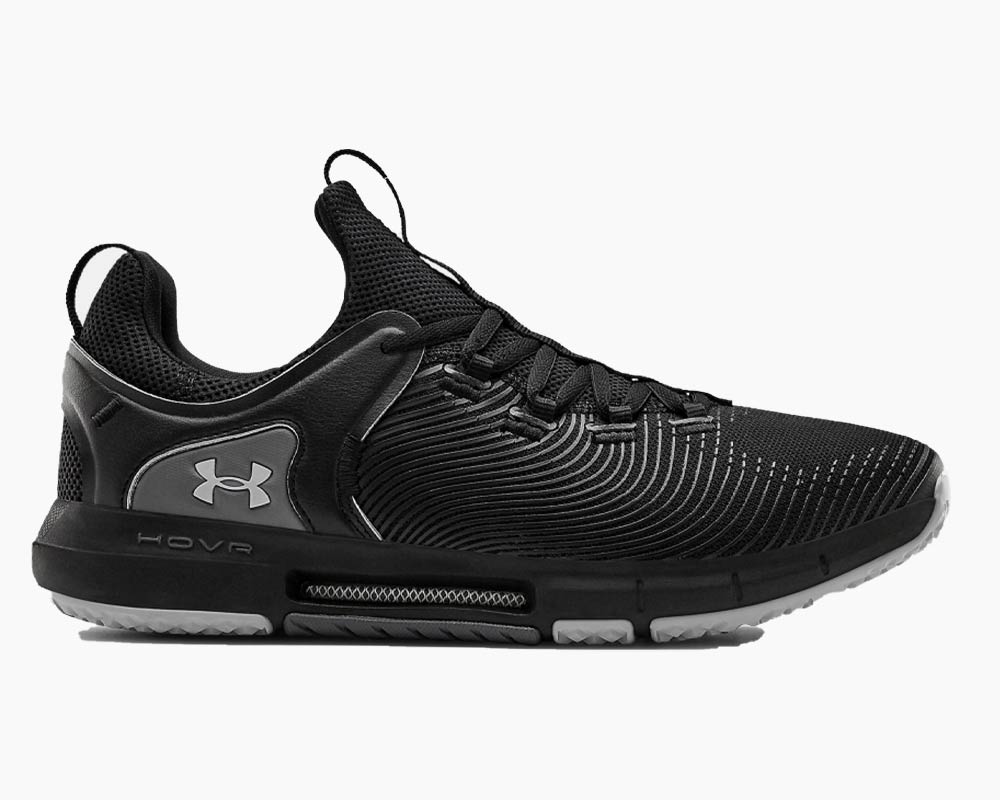 When Kevin Plank started Under Armour out of his Grandmother’s basement back in 1996, he could only have dreamed that one day his brand would be uttered in the same breath as market leaders like Nike and Adidas. Just shows what hard work and belief can achieve.

His designers have come up with this US HOVR Rise 2 training shoe. Part of the HOVR series of shoes that benefit from a specially-designed cushioning to return absorbed energy, they also offer a stretchy upper and a couple of pull tabs to help your feet slide in. Extra heel and side support helps keep your feet in place, while the rubber outsole allows you to move in any direction with full traction.
Shop Now 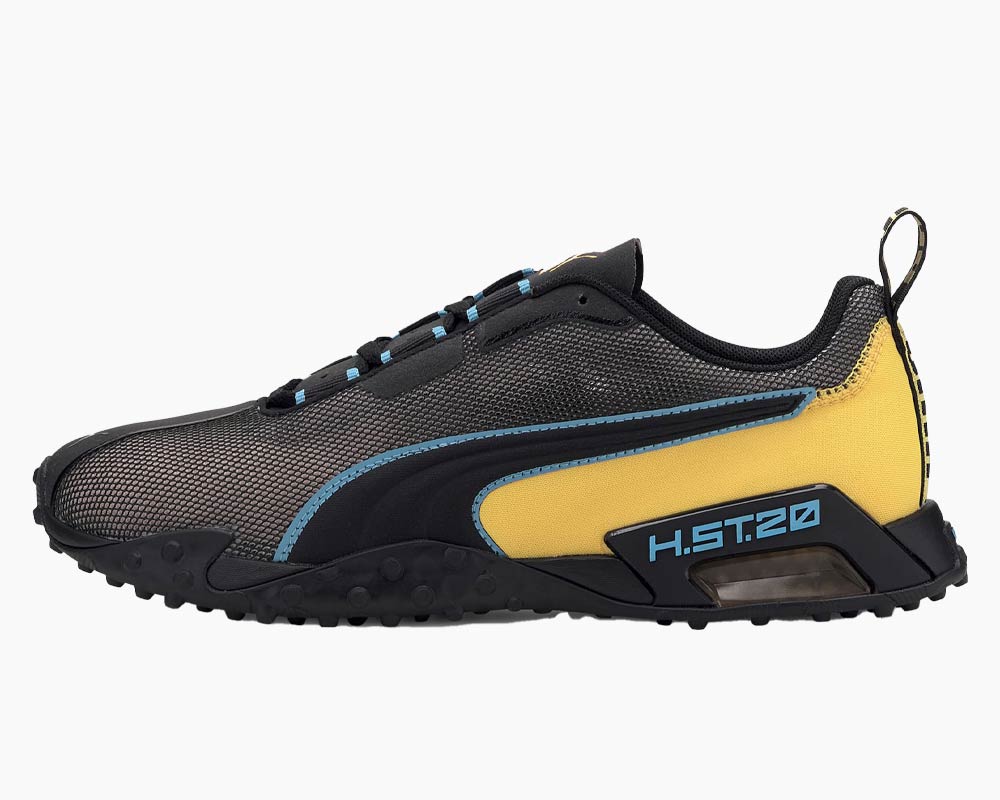 The Dassler brothers famously fell out over creative differences back in 1948. Adolf went his own way and created Adidas, brother Rudolf set up Puma. The latter may still sit slightly in the former’s shadow, but that shouldn’t take anything away from the brand’s huge success.

These H.ST.20 training shoe takes design inspiration from an early-2000s pair of running shoes, giving a handsome retro look. They're wholly modern, however, benefitting from Puma's LQDCELL cushioning system, which also works to add stability, while a HYBRID foam provides energy return to keep you moving on your feet.
Shop Now 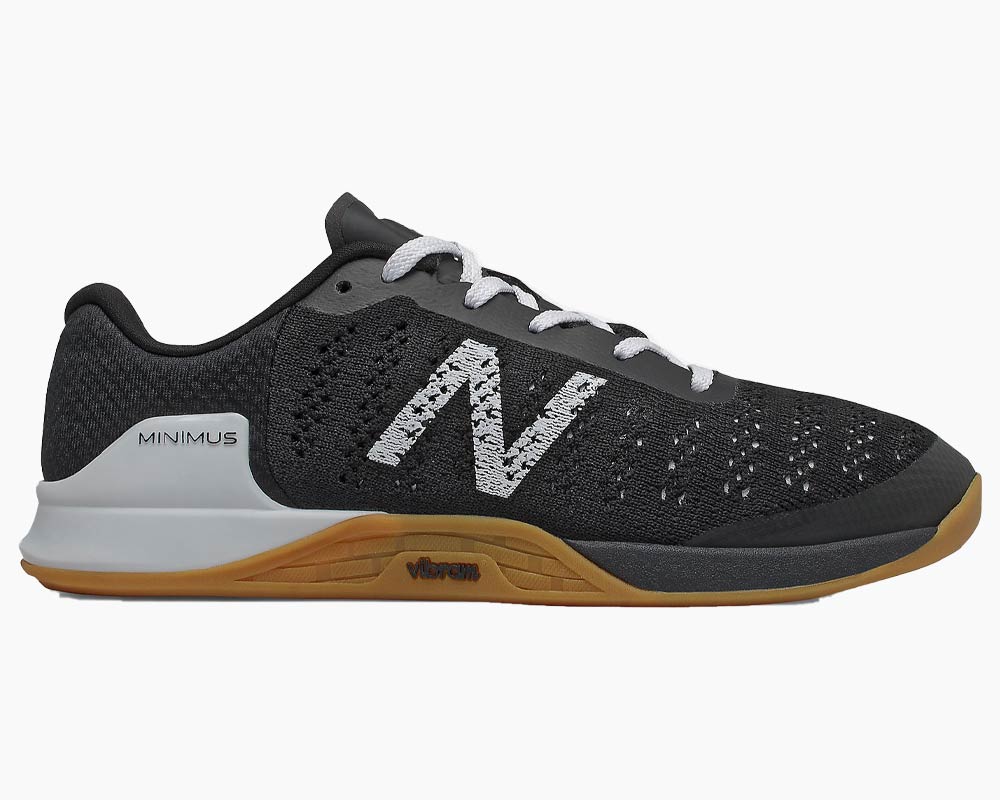 Another of the US sportswear giants is New Balance. This company found its footing (pun most definitely intended) in the footwear market, initially starting out developing insoles for those with no arches in their feet or who suffered from pronation. That expertise has since been channelled into collections of footwear that are loved the world over for their comfort, performance and good looks.

These Minimum Prevail training shoes serve up an incredibly stable platform with plenty of grip thanks to a Vibram outsole, while a REVlite midsole throws a decent amount of lightweight cushioning into the mix to help you be more sure of your ability to lift big. A knitted upper promotes airflow, and you can be assured of further stability thanks to a cleverly designed ankle collar.
Shop Now 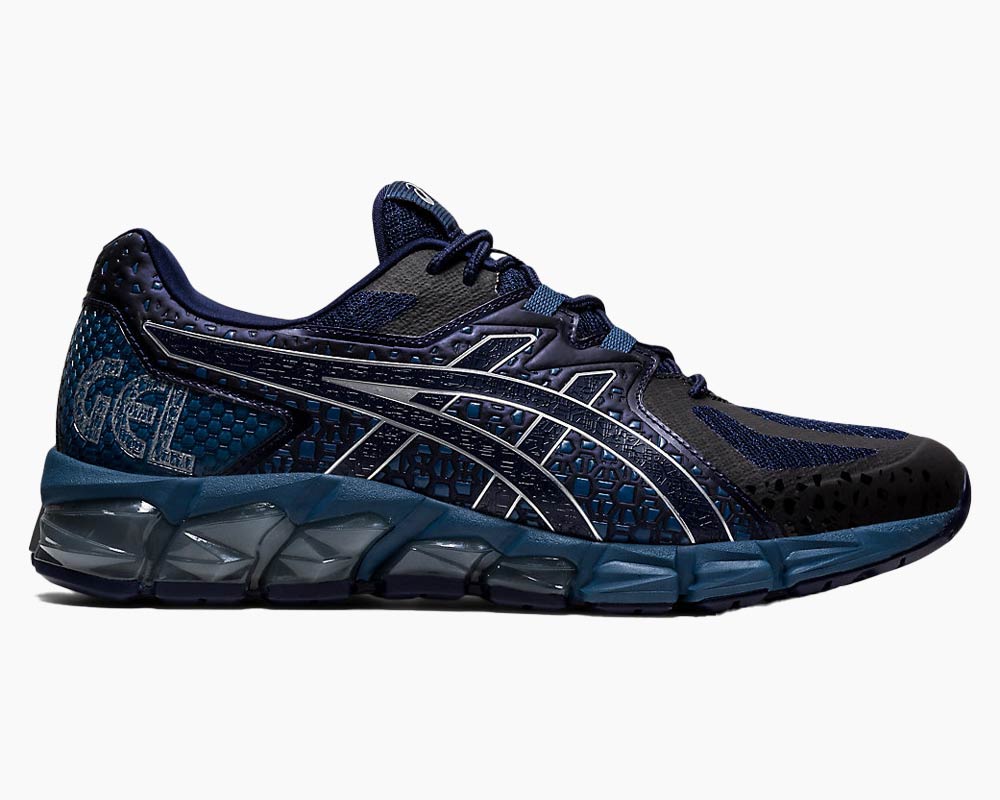 Japanese brand Asics has long had an esteemed association with running, thanks to its incredible Gel-Kayano running shoe, but the company's expert knowledge in all things sportswear and footwear have allowed them to produce a competent selection of gym and training shoes too. 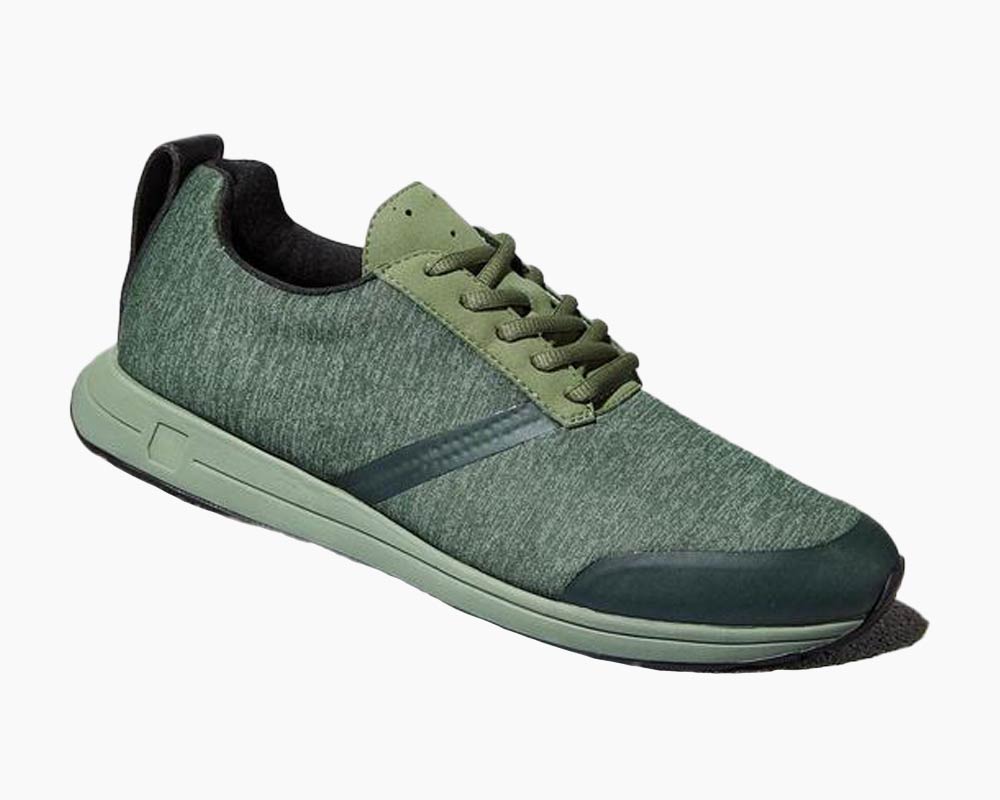 It may not be as big of some of its native brothers and sisters in the US sports sector, but York Athletics have had a big, positive impact on the sports footwear market. From their close association with NFL to more recent collabs with NBA stars, they’ve always been there on the fringes for the more fashion-conscious sportsman.

York Athletics' Henry shoe model is available in various colours, each of which determines which sporting discipline its best suited to. This Sweatshirt Fatigue model is made from a sweatshirt jersey material to provide a slipper-like feel alongside a breathable build. The solid rubber outsole gives full ground contact, meaning you can remain planted while performing deep squats or heavy deadlifts, and their casual appearance make them suitable for wearing out of the gym walls too.
Shop Now 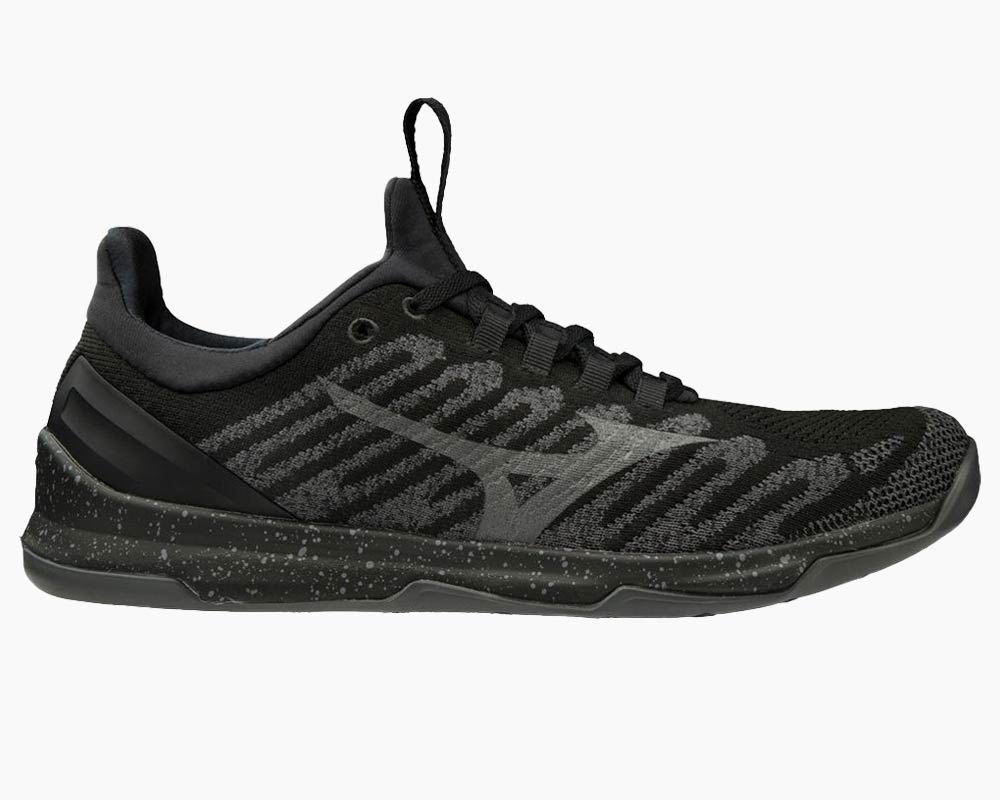 Japanese brand Mizuno has truly stood the test of time since starting out as a small sportswear store in Osaka in 1907. Although probably more associated with golf, tennis and baseball, they do like to branch out, a great example being these TC-01 trainers that promote balance and awareness during gym sessions.

They’ve been made with fully knit upper for maximum comfort and movement, and a 4mm lox drop for just the right amount of stability during exercise.
Shop Now 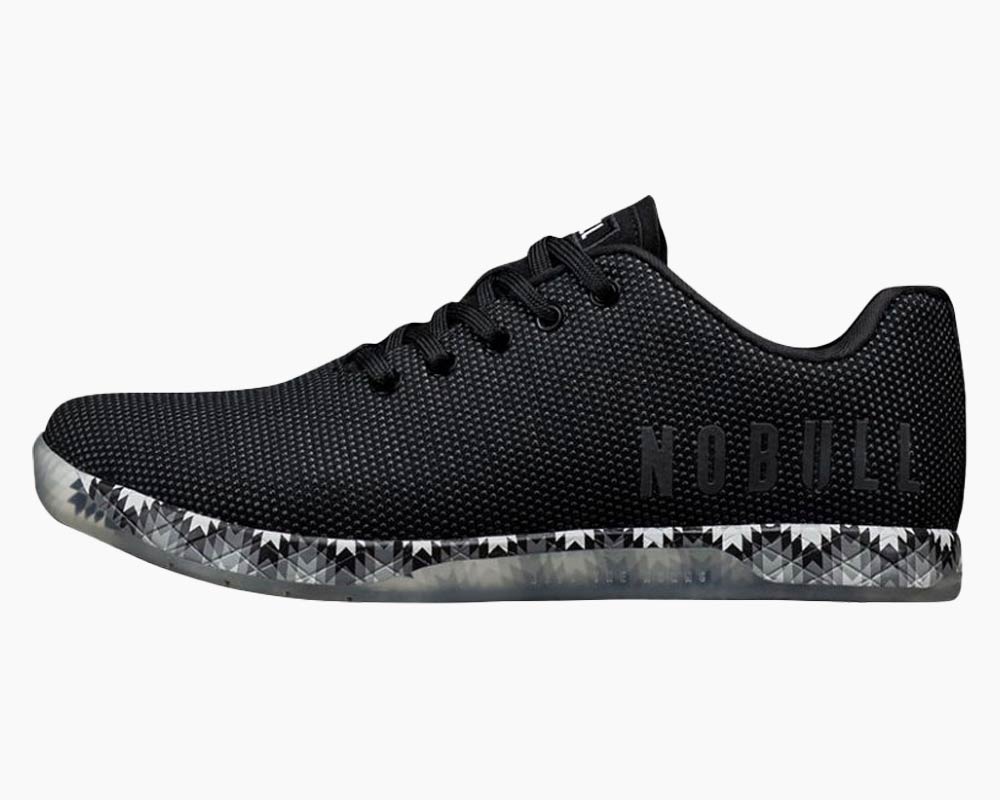 You have to have a big pair to quit a job as Reebok’s head of strategy, or even more so, it’s global creative director, but that’s exactly what Marcus Wilson and Michael Schaeffer did in 2014. Why? Because they saw a gaping hole in the CrossFit footwear market that they wanted to fill. The end results in NoBull, a brand that designs great looking gym that offers total reliability.

These Patchwork Trainers feature a 360-degree mesh layer to protect your toes on zombies and rope climbs, whilst also tightening your grip. A flat outer sole also provides fantastic stability during lifts whilst breathable fabrics offer both comfort and peace of mind.
Shop Now