While some watch manufacturers have models that are considered ‘must-haves’ for avid watch collectors – the Rolex Submariner or the OMEGA Speedmaster, for example – few brands come close to the outright exquisiteness presented by luxury Swiss watchmaker Jaeger-LeCoultre.

The company, founded in 1833 by Antoine LeCoultre, has an enormous number of accolades and patents to its name, which include the world’s smallest movement, the first keyless watch and the groundbreaking Atmos Clock, which generates its power from temperature and atmospheric pressure changes.

Suffice to say, Jaeger-LeCoultre is an absolute master in the field of horology and one that demands the respect of watch enthusiasts around the world. No wonder they’re called “the watchmaker’s watchmaker”.

Jaeger-LeCoultre was originally known as LeCoultre & Cie from 1866 until 1937. ‘Jaeger’ came along thanks to a partnership with Edmond Jaeger, a Paris-based watchmaker who worked with the French Navy. In 1903, Edmond set Swiss watch manufacturers the task of actually producing ultra-thin movements he had designed and invented. LeCoultre accepted and succeeded with the LeCoultre Calibre 145. LeCoultre was also – in 1903 – the exclusive movement supplier to Cartier, after the French jeweller made a fifteen-year agreement with Jaeger (and LeCoultre produced all of Jaeger’s movements). It was this collaboration that eventually spawned the Jaeger-LeCoultre name.

With over 1,200 calibres, 400 patents and hundreds more inventions, picking the very best Jaeger-LeCoultre watches to buy right now isn’t the easiest of tasks. However, just as LeCoultre accepted Edmond Jaeger’s challenge, we have accepted this challenge ourselves and present to you the coolest JLC watches to buy this year. 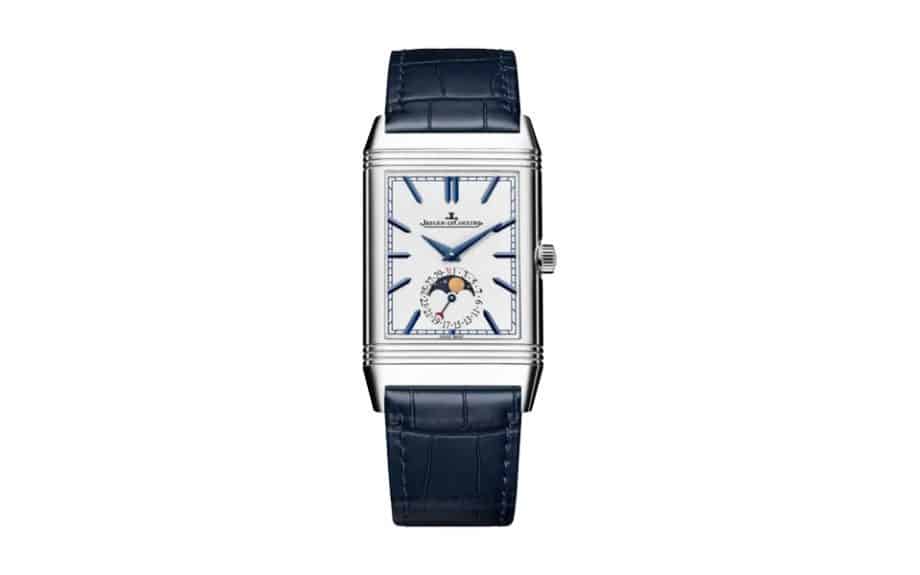 The Reverso is an absolute classic; not just as a Jaeger-LeCoultre timepiece, but in the entire history of wristwatches. First launched in 1930, the Reverso was designed to be worn by British Army Officers in India, where it also needed to be able to withstand the rigours of polo matches. The dial can be flipped over – or reversed – so that the face would be concealed and therefore protected from mallet strokes. Its square face helps lend it towards being worn in more formal settings, but its Art Deco styling and pure aesthetic suit casual applications as well.

This version of the classic Reverso uses the watch’s signature rotating case to feature two time-telling faces, both of which feature day/night displays. Essentially, this makes it two watches in one: flip over the face for a totally different aesthetic. 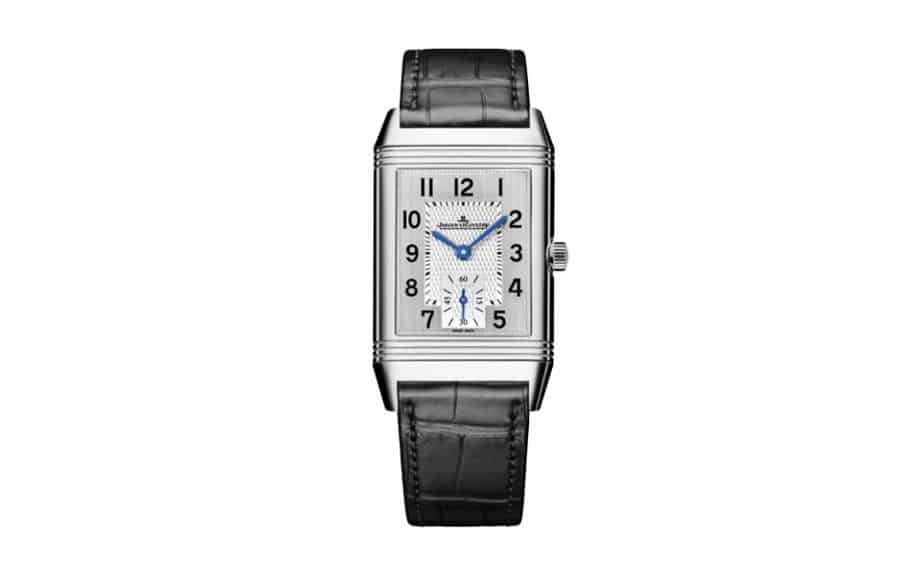 This Reverso Classic Medium Duoface is a slightly more restrained take on the Reverso. One face features Arabic numerals, some funky blue second hands and a small seconds display at 6 o’clock, while the other features straight indices and swaps out the small seconds for a 24-hour display. A masterclass in clean design, it’s a perfect daily wearer.

JLC’s manually-wound 854A/2 calibre is running the show, responsible for displaying two separate time zones (one on each dial) had has a generous 42-hour power reserve. 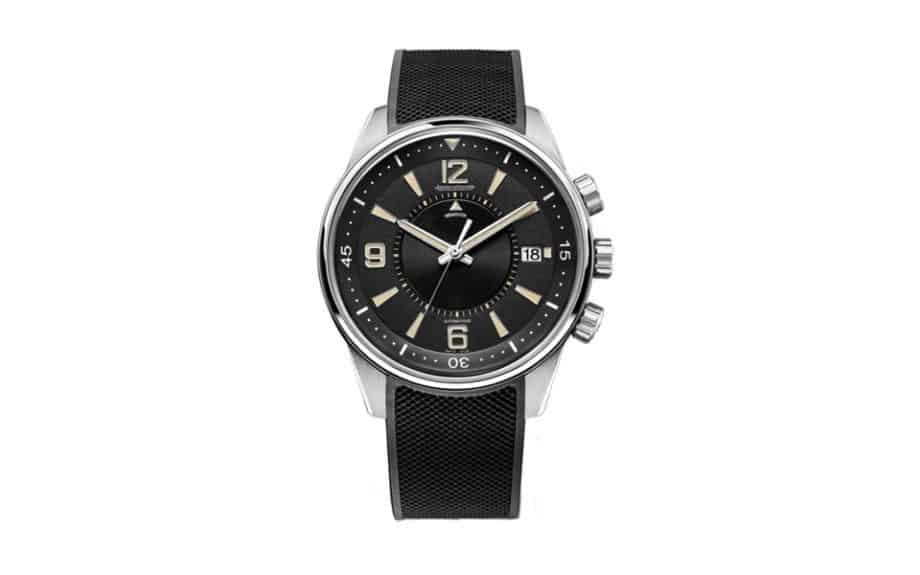 The Polaris Memvox is another equally iconic model from the JLC history books. First released in 1968 as part of the Polaris series, the Memovox edition has the extra selling point of a mechanical alarm, or “voice of memory” – JLC first launched a standalone Memovox timepiece in 1950 – which was designed to assist divers to tell them when it was time to resurface. To set it, you need to use the crown found at 2 o’clock, which rotates the internal bezel upon which there is a small triangle. Simply move this to the time you want the alarm to go off at, and you’re done.

This particular model of the Polaris Memvox was released to commemorate the watch’s 50th anniversary and is limited to 1000 pieces. The coupling of a black dial with off-white hour markers and hands (both of are treated with lume) give it a thoroughly vintage feel that helps it acknowledge its roots. It is, however, a completely modern affair with a rubber strap adding to its sporting credentials. 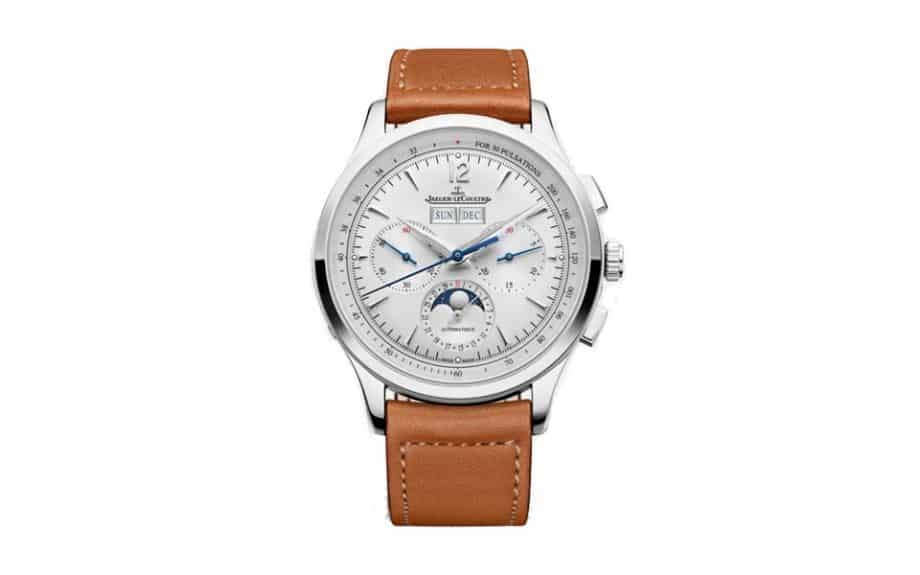 JLC introduced this clever watch in 2020, but the Master Control family of watches has been around since 1992. The family has always played host to intriguing, technical complications, and this watch is no exception. This particular timepiece is a first for JLC as it combines a full calendar (day, date, month) with a moon phase indicator. To facilitate this, JLC designed and developed a brand new movement: the JLC 759, which has no fewer than 356 parts and also boasts a healthy 65-hour power reserve.

We’ve picked out the stainless steel version as our favourite, but this watch can also be had in a new Le Grande Rose Gold colour, which has palladium added to JLC’s top-secret formula to help prevent the natural oxidation process, leaving it shiny for years and years. 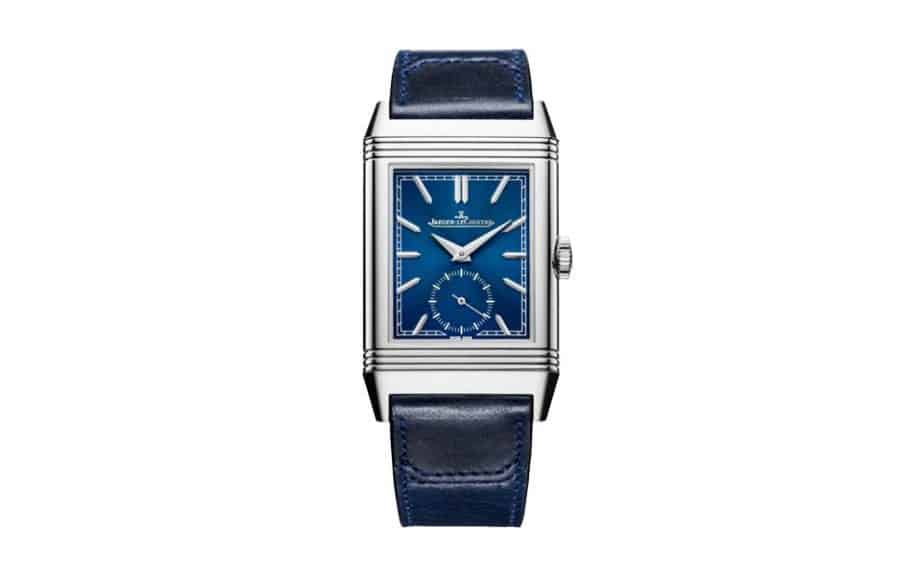 The Reverso Tribute is a completely different series to the Reverso Classic because, as the name suggests, it is a tribute to the original model released in 1931. The Tribute series is also where you’re more likely to find various complications integrated into the dial. This Small Seconds edition is one of the more simple editions, offering just a small seconds complication, but it also introduces a blue dial (the Classic models only get white dials, and the Tribute can also be had in burgundy and green).

The dial is what will attract many to this watch, as the sunray finish paired with an applied lacquer give it a sort of 3D effect that can only be really appreciated in the flesh. Throw in a Casa Fagliano leather strap (the Argentinian company makes some of the finest leather riding boots in the world) in a matching colour and you have yourself an incredibly premium, incredibly comfortable timepiece. 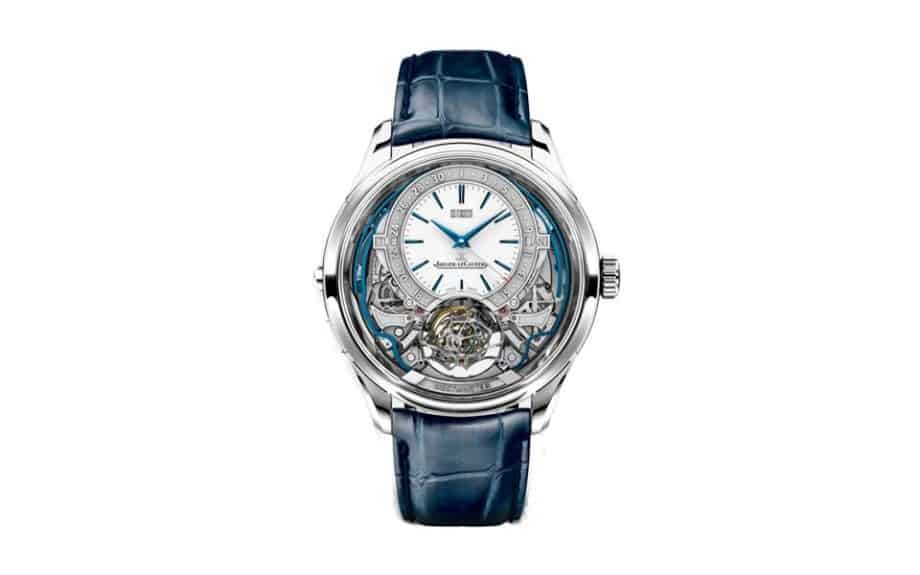 If ever you needed evidence to prove that JLC really is a cut above the rest of the competition, then this mouthful of a watch is it. A monumental feat of engineering, there’s a lot going on with this watch. Your eyes will no doubt be drawn to the gyrotourbillon, or multi-axis flying tourbillon: this complication was invented by JLC and sees a regular tourbillon cage mounted inside another cage, so that it rotates on both vertical and horizontal axes, thus eliminating the effects of gravitational forces.

Elsewhere there is a minute repeater with Westminster chime to indicate the quarters between hours and minutes, again, no easy accomplishment. Oh, and then you also have a perpetual calendar, a walk in the park for a manufacturer of JLC’s calibre. In fact, the JLC 184 movement inside has 1056 parts, all in a case that is just 43mm wide and 8.9mm high. Hats off JLC. 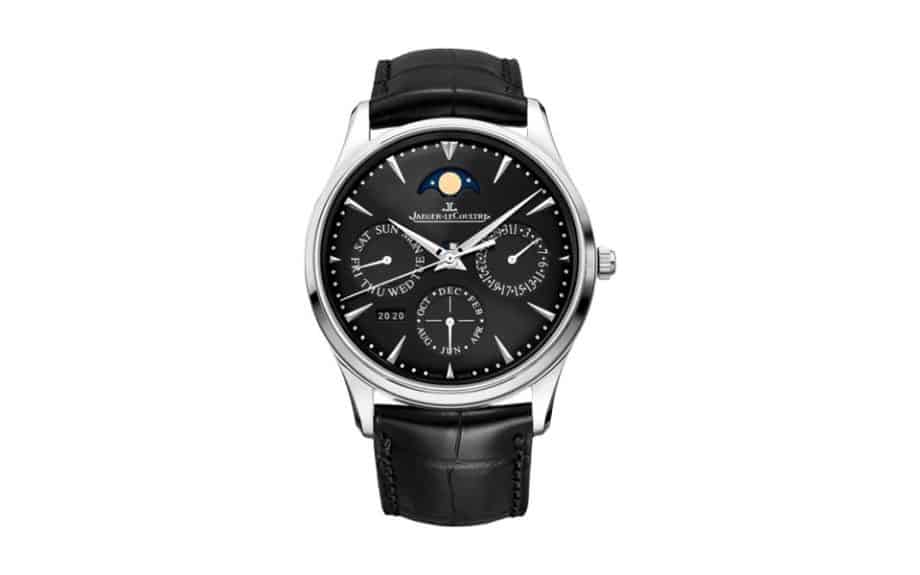 Jaeger-LeCoultre’s Master Ultra Thin line of watches has always been revered within the watch community. For JLC to pack in various complications with different models, yet keep the timepieces much thinner than you’d expect, is no easy task. This model complete with perpetual calendar – launched in 2013 – is testament to that, coming in at just 9.2mm thick, which is, quite frankly, insane. That slim frame is made possible thanks to JLC’s calibre 868: a 4.72mm thick ultra-thin modular perpetual calendar movement that has been used before.

While it can also be had with either a rose or white gold case for those who love their precious metals, the stainless steel option should make a lot of watch fanatics particularly excited, as it makes a perpetual calendar that bit more accessible.

How much is a Jaeger-LeCoultre Watch?

Because of their use of complex movements and precious metals, Jaeger-LeCoultre watches can demand high prices. The most affordable route into the brand is with a Reverso, which will set you back less than $10,000. However, models such as the Master Grande Tradition Gyrtourbillon Westminster Perpetual will cost you well over $1 million.

Do Jaeger-LeCoultre watches hold their value?

This is a tricky question to answer, but in general, no, JLC watches will not hold their value. At least, not compared to other brands such as Rolex and Patek Philippe. Select JLC models may be able to command a higher price than what you paid if you ever sell it, but it would need to be in an incredibly clean condition to have such a chance. You should buy one because you love it, not because you think it's going to make you a packet.

What is the best Jaeger-LeCoultre watch?

A very subjective question. For us, we love the Reverso for its ability to have its face flipped around. It's an icon. The Master Control Chronograph Calendar is another favourite too. But since JLC offers a wide range of timepieces with a generous selection of complications used throughout, you should have no issue in finding the best Jaeger-LeCoultre watch for you.