Adelaide is a city with a strong entertainment, dining and nightlife scene. The city centre, meticulously designed by Colonel Light, has resulted in distinct areas being formed, such as the East End and West End. These defined areas have since taken on their own character, making it easy to decide where you want to go, depending on what you’re looking for.

When it comes to pubs, Adelaide more than delivers. While it’s certainly true that the East and South East areas of the city centre are known for their restaurants, bars and clubs, pubs are, in fact, dotted around the entire section between North and South Terraces. Did someone say conveniently laid out pub crawl?

Pubs can be separated from bars through the simple fact that they’ll usually have a far more extensive food menu to accompany the drinks on offer. Also, while pubs are slowly transitioning into offering cocktails, they’re not going to rival those that you can drink at dedicated cocktail bars.

But which pubs should you be visiting in Adelaide? If you’re a local, you’ll probably already have your favourite(s), but if you’re new to the city, then you’ll do well to sample the service and drinks selection offered by those on this list to establish your new go-to.

So here’s our picks for the best pubs in Adelaide... 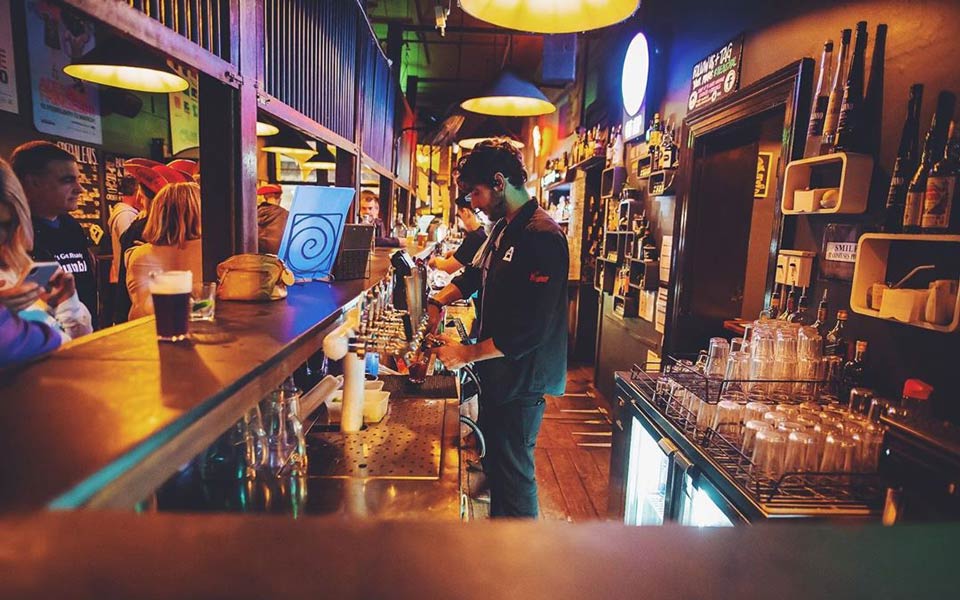 1/11
The Austral is pretty much an Adelaide institution. Located in the city's North East, a stone's throw from the Uni of SA, this pub has welcomed all manner of patrons through its doors since it opened in 1880. Today, The Austral takes advantage of its SA setting, which is reflected in the drinks menu. Craft beers are sourced from local breweries and wines all come from the region's wineries, including the Barossa and McLaren Vale, which are served alongside traditional pub grub.
Address: 205 Rundle Street, Adelaide, 5000
Phone: 08 8223 4660
VIEW 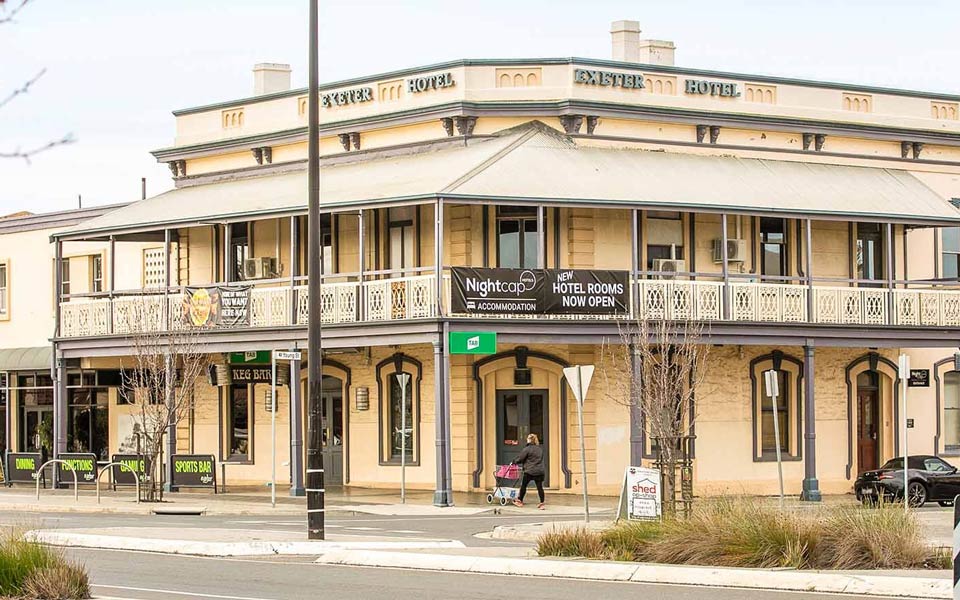 2/11
The Exeter Hotel was named and opened in 1851 by Robert Radford, an Englishman from Exeter, England, who moved to Adelaide from Tasmania in 1850. If the walls could talk, they'd have plenty to say, as the Exeter has seen its fair share of drama over the years.
Today, the pub, in a similar fashion to The Austral, places local drinks front and centre. Coopers Brewery beers are all on tap, but a further selection of craft beers can be found in the fridge, alongside a healthy selection of local wines. With a weekly-changing menu and live music every night, The Exeter is a pub to visit everyday of the week.
VIEW 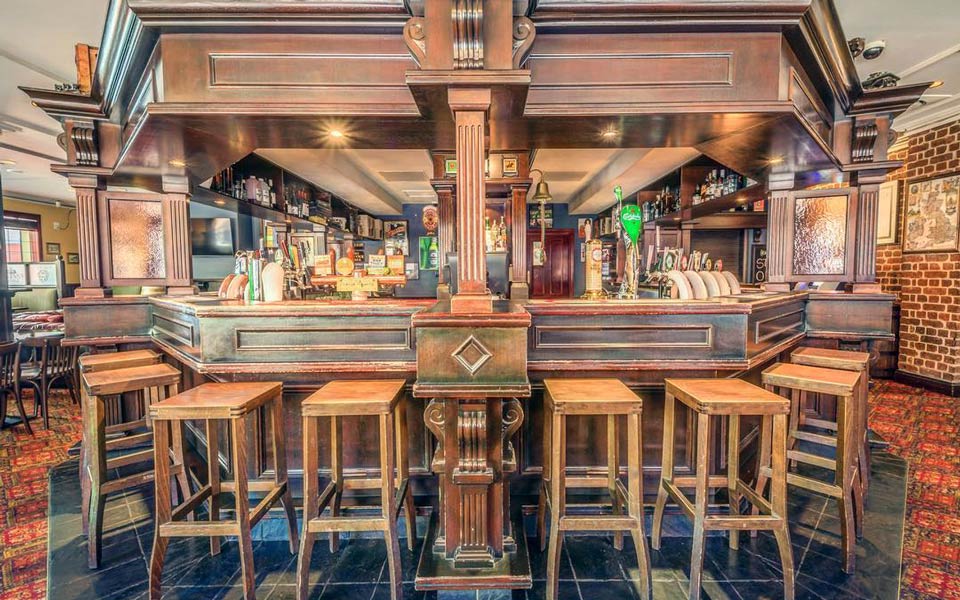 3/11
For a quintessential British pub experience, head down to The Elephant. Slinging beers and pub dishes to patrons since 1998, The Elephant has come to be known for its live entertainment and as a perfect meeting spot for friends and family no matter the time of day. The beer selection comprises local, national and international flavours, while the food menu is decidedly British with an Australian twist.
Address: 1 Cinema Place, Adelaide, 5000
Phone: 08 8227 1633
VIEW 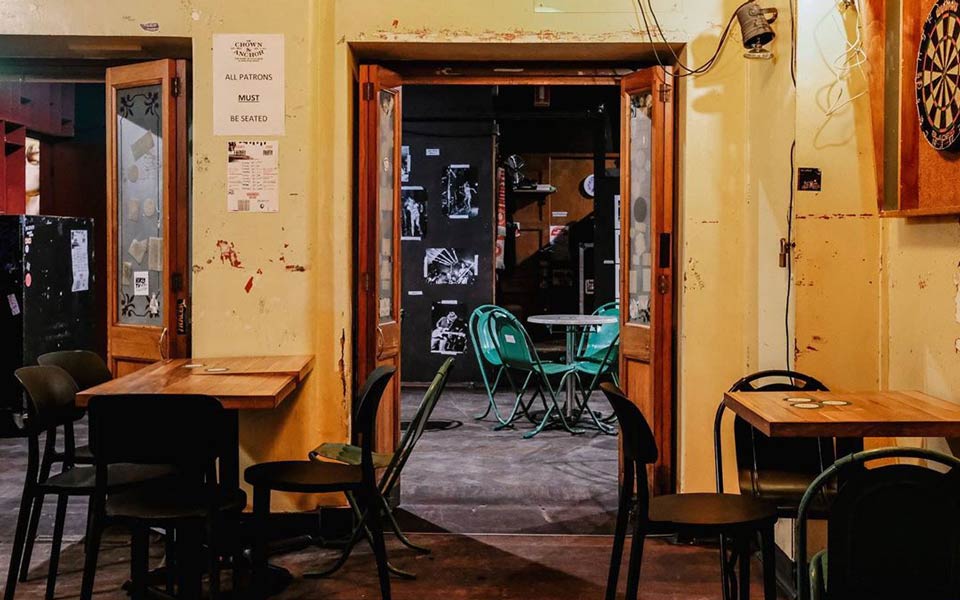 4/11
Affectionately known as 'The Cranker' among locals, this pub – also built in the early 1850s – is on the grungier side with regards to atmosphere and décor. It's this association with the punk-fuelled days of yesteryear that has seen it become well known for being a live music venue and a lot more 'simple' when it comes to what to expect from a pub. Local brewery Coopers has remained the resident on tap for several years, although you're welcome to sample a couple of others (the bar staff just might not be that happy about it, is all).
Address: 196 Grenfell Street, Adelaide, 5000
Phone: 08 8223 3212
VIEW 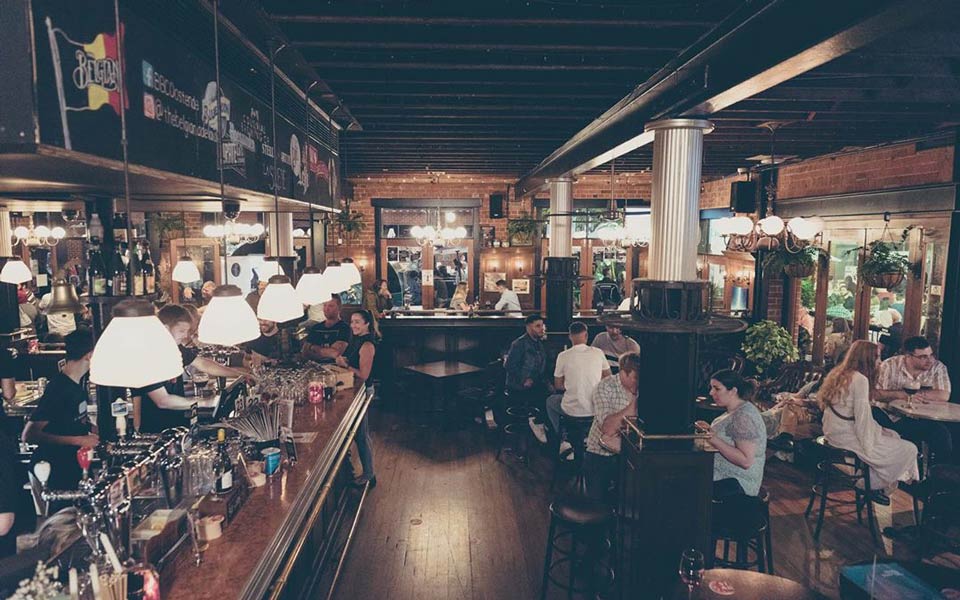 5/11
For a refreshing change from local drinks and eats, the Belgian Beer Cafe offers, as its name suggests, a whole heap of Belgian beer. That's not to say you can't enjoy a local brew, it is in Australia after all. With some 80 beers available to choose from, you're not left wanting for more. The food menu reflect a combination of European and Australian influences, although bowls of Mussels are the real draw here.
Address: 27-29 Ebenezer Place, Adelaide, 5000
Phone: 08 8359 3400
VIEW

6/11
The Havey, as it is commonly known, was one of the first pubs to be built in Adelaide's South East corner along with the Arab Steed (which is featured in a bit). It hasn't changed a great deal since it was built, although it receive some much needed renovations in recent years. It's a popular jaunt for the younger crowd who use it as a meeting spot before moving onto Adelaide's assortment of clubs.
Visit for a bite to eat and you'll be presented with a limited, yet well thought out menu filled with dishes you'll actually want to eat while drinks are sourced predominantly from local suppliers to show off everything Adelaide has to offer.
Address: 162 Hutt Street, Adelaide, 5000
Phone: 08 8223 3680
VIEW 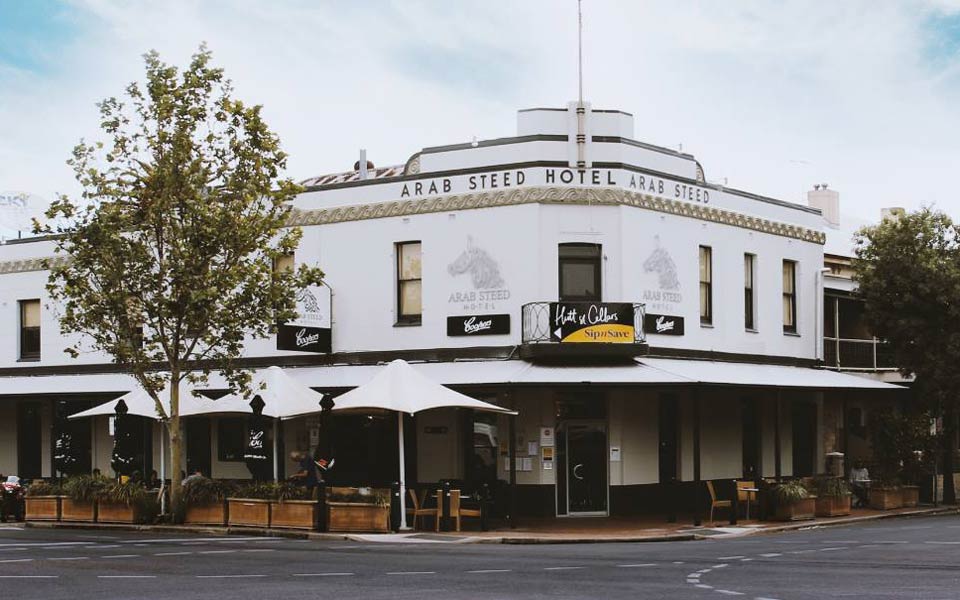 7/11
The Arab Steed Hotel that is found just down the road from the Havelock was built around 1878 (after the original single-storey building was knocked down). It's similar in style to other Adelaide stalwarts The Austral and Exeter, although the verandah was a much latter addition in the 1930s.
The pub has been under the ownership of a husband and wife team for just over three decades, and in that time they've rotated the food and drinks menu to adjust to local tastes (the food menu features Asian-inspired dishes alongside traditional pub fare), as well as keep the building looking as good as it does. No visit to Adelaide would be complete without a visit to the Arab Steed.
VIEW 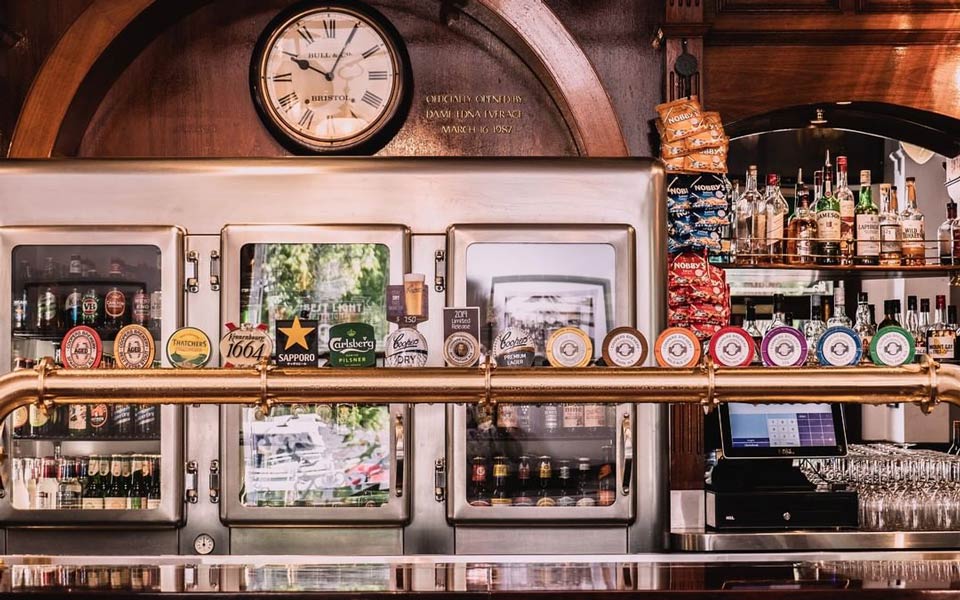 8/11
One of the most famous beer exports to come from South Australia is Coopers. The company's brewery was founded in 1862 and quickly put SA on the map for craft beer. While you could pay a visit to the brewery, that would mean leaving Adelaide city centre. To savour the entire range of Coopers brews, head to The Original Coopers Alehouse at The Earl instead. This CBD staple brings together Adelaide's famous beer and some delicious food under one roof, that makes for a perfect spot to watch live sport or to hold a function.
Fortunately, if you're somehow not a fan of Coopers, then you'll find a strong selection of other domestic and international beers, alongside a handful of ciders. Food includes giant schnittys and steaks that will challenge even largest of appetites.
VIEW 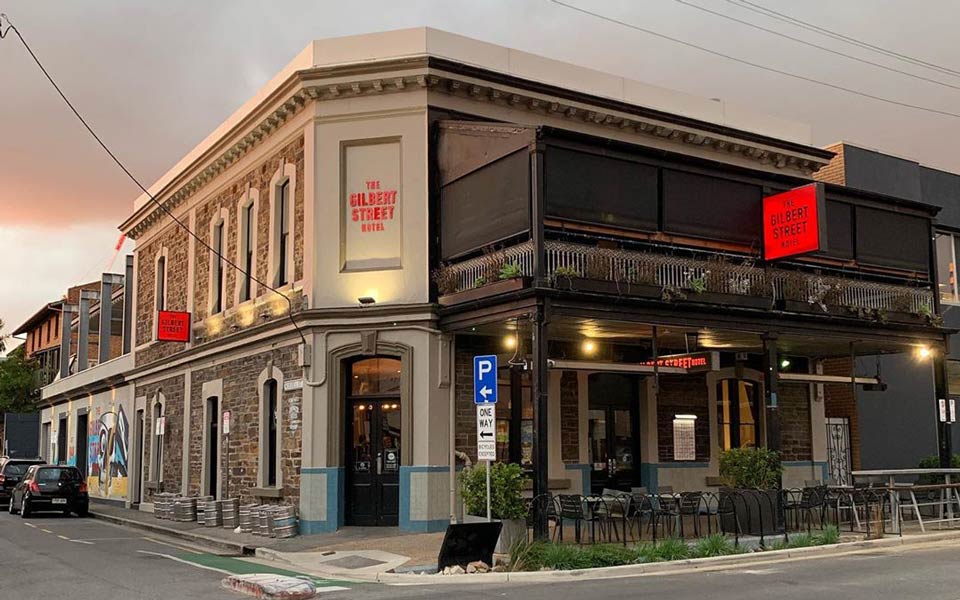 9/11
Conjure up an image in your mind of what you want your perfect pub to look like and we reckon it will look something like The Gilbert Street Hotel. Nestled in the south west of the city, Gilbert Street boats an incredibly welcoming (and large) beer garden that makes it an ideal weekend boozing spot. Beers on tap are rotated regularly and are sourced from all over Australia.
Weekday happy hours, live music and meal deals only add to the appeal of this iconic pub and if you plan to visit on a Wednesday or Thursday night, you simply have to have what are widely regarded as the best buffalo wings in Adelaide (pre-orders recommended).
Address: 88 Gilbert Street, Adelaide, 5000
Phone: 08 8231 9909
VIEW

The Duke Of Brunswick

10/11
The Duke of Brunswick or, the DOB, is on a mission to become the most social pub in the whole of Australia. By that, it means it wants to be the host of as many community group meet-ups as possible, along with being a pub that welcomes anyone and everyone through the doors.
The same community spirit is exemplified through the range of food and drink. The DOB was one of the first pubs in Australia to offer gluten free beer on tap, and you'll even find a generous selection of alcohol-free spirits and beers for those who have pledged a life to sobriety. Whatever your poison, you'll find it at The DOB.
Address: 207 Gilbert Street, Adelaide, 5000
Phone: 08 8410 7079
VIEW 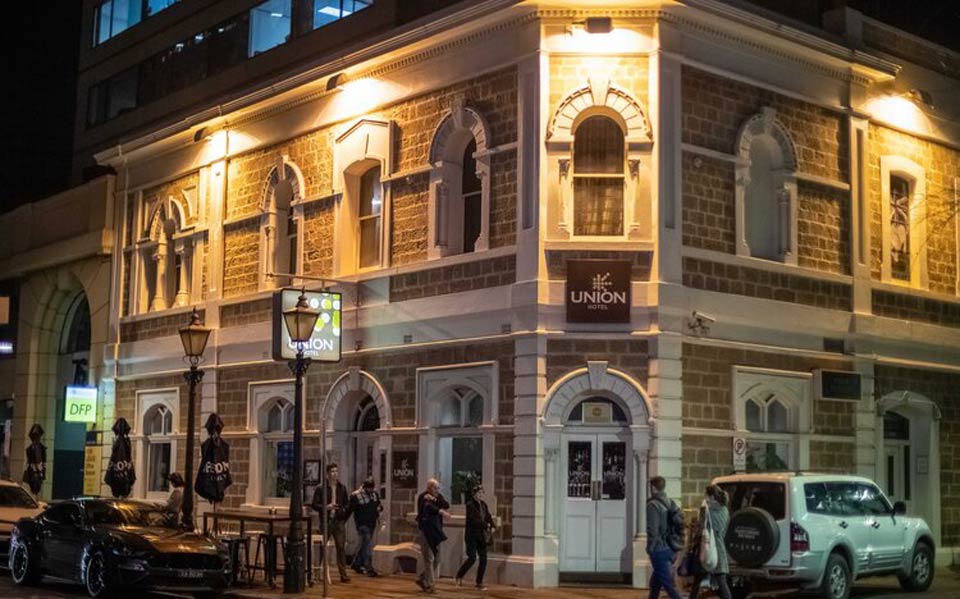 11/11
The Union Hotel could be the perfect pub destination. Not only does it offer a central location and a warm atmosphere, but it's a pub you go to just as much for the food as you do the drinks.
Not only will you find a comprehensive choice of tap and bottled beers catering to local and international brands, but the food is of fine-dining quality. Yes, traditional pub favourites are on the menu such as burgers and schnittys, but they are out of this world tasty, and equally good looking.
Address: 70 Waymouth Street, Adelaide, 5000
Phone: 08 8231 2144
VIEW
Watch This Next
273635
load more