It’s no secret that Australia is one of the true pioneering countries of surfing, and is home to some of the best breaks in the world that command a wave of surfers both local and international. Of course, not everyone is a seasoned pro and everyone needs to start somewhere, and fortunately, there are plenty of beaches and breaks that are perfect for learning to commandeer a board.

Once you’ve got the skills to pay the bills – and all the gear from some of the best surf shops around – you can start tackling some of the countries’ trickier waves that will only result in feelings of absolute elation when you don’t wipeout. Sydney is home to its fair share of world-class surfing beaches and breaks that cater to everyone from beginner to pro, and the very act of driving between them is just as awesome as the surfing itself, such are the scenic journies you’ll find yourself on.

While we could easily list all the surf beaches in Sydney in this piece (there’s around 70), we’ve instead chosen to curate a list of just the very best, taking into account beaches that work best in various winds – some, for example, are at their peak in southerly winds while others work better when the wind comes from the north – and how busy they tend to be. After all, nobody really likes to surf with a crowd around them, no matter the skill level.

We’ve also broken it down to separate waves that are better for learners and those who really know what they’re doing – thanks to first-hand knowledge from our resident surfing expert.

So, pack up your boards and take a trip to the very best surfing beaches and surfing spots Sydney has to offer.

Not just the filming location for Home & Away or a millionaire’s paradise, Palm Beach does, in fact, have some great surf, particularly at the northern end of the beach. However, the north is better suited to competent surfers, while the southern end is far more gentle when the wind is coming from the south, proving popular with beginners for a consistent set of waves that are a good size for learning how to duck dive and get up on your feet.

A gem within the Northern Beaches is Collaroy, which, like Palm Beach, caters for both amateur and pro surfers. It’s the southern end that will suit beginners, however, thanks to the Long Reef Point that protects the southern end from swells. But when a southern swell hits, expect to be gifted consistent waves that are well-sized for learners.

Curl Curl as a standalone beach is one of the very best in Sydney, but it’s the Northern end that will have beginners chomping at the bit to catch some waves, although, only on small days. Waves break right and left, so both regular and goofy riders will be at home, and when waves do break during offshore west and north-west winds, they’re consistent at a couple of feet.

Moving further down the coast we come to Freshwater beach, which is a prime spot for beginner surfers, along with those who are looking to progress into more intermediate territory. The waves that break flow all the way into the beach, so ample time for perfecting your stance, and rarely reach above two metres in height. As an extra piece of trivia, Freshwater is the beach that Hawaiian surfer Duke Kahanamoku introduced Australia to surfing in 1914.

Literally just around the corner from Freshwater is Manly beach, which is split into quarters: Queenscliff, North Steyne, Manly and South Steyne. We’re focusing on the Manly section here, and the southern end specifically, due to it being more sheltered. You’ll want to try your hand catching some waves when winds are southerly, as this is prime time for some consistently surfable waves.

Fairy Bower is a point break, rather than a beach break, but even if you’re a beginner you shouldn’t let that deter you. The break at Bower has several elements to it, and beginners should steer clear of the first two: “Winki” and “Suck Up”, and aim to catch the wave formed during the final part, dubbed “Race Course”. However, because of the changing sections of the wave, Fairy Bower is a good spot to put your amateur skills to the test so you can advance your surfing skill.

Bondi isn’t just one of the most famous beaches in Sydney or Australia, but is one of the most famous in the world. Despite the crowds that descend upon the sprawling sands every day during peak summer, it’s also a good spot for learning to surf. You’ll want to head to the northern end in particular, as it’s protected by the headland. Beware though, waves in the northern end can get big during big swells, so keep an eye on the reports.

Cronulla is in its own little bubble in the Sutherland Shire, offering everything you could really need from coastal living. That includes some fantastic surfing spots, and there are plenty to keep anyone from beginner to advanced perfectly happy. For the beginners, head to the far north end of the giant stretch of sand in ‘Nulla, to Greenhills Beach. Being situated further away from the main hustle and bustle of Cronulla, you’re less likely to bump into crowds, which is a bonus. Plus, Greenhills serves up plenty of smaller waves that are simply a dream to learn on.

About 40 minutes further down the coast from Cronulla is where you’ll find Stanwell Park. We’ll admit this isn’t the best spot to learn if you’ve never set foot on a board before, but once you’ve got a rough idea of what you’re doing, there’s nowhere better. Stanwell Park (Stanny) is a completely exposed beach break that is always serving up some sort of surf. Optimum conditions call for a southeast swell combined with a northwest offshore wind, but if you’re not able to head here during such a moment when the planets align, you’ll still be able to get up onto a wave of decent height.

Ok, now we’ve got the beginner waves out the way, it’s time to start talking about the monster breaks that form a good chunk of Sydney’s coastline. The majority of these waves are reef or point breaks, as opposed to beach breaks, so aren’t technically surf beaches, but they’re well worth checking out if you want to put your skills to the test. Reef breaks have the advantage of serving up consistent waves due to the reef beneath barely moving, so they can present a good chance to progress your skill – just try on the beaches first if you’ve never been or are still at a beginner level. 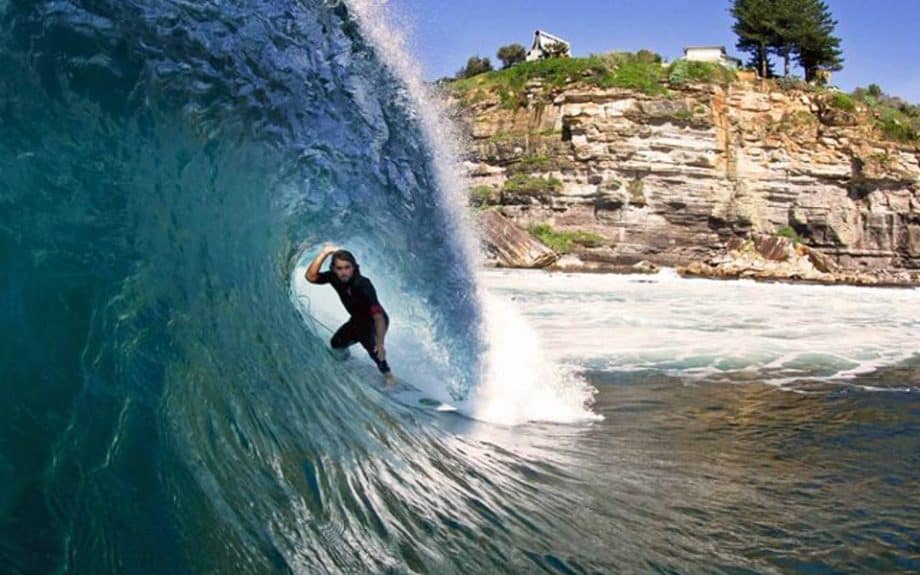 Right at the top end of North Sydney is Avalon beach, and while the beach break may be good for surfing, it’s the Little Avalon reef break that can really separate the men from the boys. It’s been compared to Shark Island in Cronulla (which features later) and so is ideal for bodyboarding and shortboard surfing. Waves here can reach over 6-foot if conditions allow, so you’ll want to make sure you get some serious practice in before tackling those bigger breaks.

This surfing spot has amassed a serious following not just with the locals, but worldwide. It’s not a wave that works every single day of the year, but when it’s on, it’s on. The minimum size you can expect at North Narrabeen when conditions are right is 3ft, but waves can easily reach 8ft or more. You should really only head out if you’re experienced.

Another point-break that only really works when waves start at around 5-7ft – they’ve been known to reach 16ft and more in particularly stormy conditions. Nevertheless, if you choose to surf Dee Why Point, be prepared to celebrate after you’ve caught a barrel. A tube section forms straight away from a steep take-off, followed by a wall section. If surfing in low tide, it will usually tube again. It can be daunting just thinking about heading out at Dee Why Point, but make it and you’ll have a surf to remember.

North Steyne is a quality beach break that is usually bigger than the waves you get down the rest of Manly beach thanks to the offshore bombora channelling the swell. If the swell is coming from the east then you’re onto a cracker of a day’s surfing. Just – and we can’t stress this enough – don’t drop in on the locals.

Deadmans in Manly is renowned for serving gigantic waves during mega swell – it was the site of the “best wave ever surfed in Sydney” in July 2020 – and as many experienced riders claim, make sure you watch a few waves come in first before you head out and kill yourself. Attempt it and succeed, however, and you’ll go down in the history books.

Bronte Reef, or ‘Bunnies’, is a reef break just south of Bondi that offers something for everyone, as it is made up of several sections during the break. It will occasionally barrel, so always worth getting onto a few waves just in case you can get yourself into a tube, but ultimately, surfing here is pure fun.

Another huge, demanding wave is Cape Solander – the break itself is called Cape Fear – nestled between Botany Bay and Cronulla. When big swell hits Sydney’s coastline, people flock to Cape in their hordes, either to surf the giant waves or to spectate and marvel at the guys who dare risk it all for glory. Waves here can easily reach 10ft but make sure you know what you’re doing if you wipeout, as there are numerous rocks around just waiting to punish you. Oh, and there can be sharks around too.

For even heavier and scarier waves, Voodoo is a spot not to be missed. Really, you should only be attempting to surf here if you’re incredibly experienced, as to even get to the break is a good 500m paddle. When it’s on (usually between December – March), it can be incredibly fun, but scary at the same time. Underneath you is pure rock, so be prepared to take some bumps, but make it out the L-breaking wave and you’ll feel like you’re on cloud 9.

This is another reef break that is only for seasoned pros or experienced bodyboarders. It’s a heavy reef break that can be incredibly unforgiving since it breaks onto sharp rocks, and with it being relatively shallow underneath, you’re more than likely to get a serious thrashing if you wipeout. Surfers can only really take the right-hander in good swell conditions, and occasionally the jet skis will come in to tow you in. Bodyboarders meanwhile have the luxury of going in either direction.

Where can I surf in Sydney?

There are numerous beaches you can surf in Sydney. Manly is one of the most popular, followed by Bondi Beach. Head further up the Northern Beaches for great beginner waves or down the coast to Cronulla for some of the heaviest around.

Can you surf at Cronulla Beach?

Yes, Cronulla Beach has several surf spots that cater to beginners and pros. Greenhills Beach is better for beginner level surfers while spots such as Point and Shark Island are for those who dare to brave heavy waves.

Can you surf at Bondi?

Bondi Beach is a great place to learn to surf since there are several surf schools around to cater to a large number of international tourists in the area.