Boxing is a sport that has an incredibly long history, with many historians claiming the first evidence of fist-fighting sporting contests dating back to the 3rd and 2nd millennia BC. However, hand-to-hand combat has most likely been a fixture of all mankind since the dawn of time. It seems we’ve never been able to resist a brawl or a bust-up, then.

Today, boxing is a multibillion-dollar sporting enterprise, with some of the biggest names earning tens of millions of dollars just for one fight – we’re looking at you, Floyd Mayweather. As a fitness discipline, boxing has myriad health benefits, including the burning of fat, increased cardio fitness and increased strength, and it’s even been proven to be a fantastic stress reliever. Letting your anger out a punching bag or somebody’s face (legally, we might add) is a surefire way to calm you down.

If you want to get into boxing, you could go to a regular gym and hope it has a punching bag lurking around somewhere, but for the very best training, you’ll need to go to a dedicated training gym.

Fortunately, for Sydneysiders, the City is home to a fair number of boxing gyms, all of which have the sole purpose of turning you into a champion fighter. But rather than have you go off and search for one, we’ve done the hard work for you (maybe not as hard as boxing itself, but you get what we mean) by curating a list of the very best boxing gyms Sydney has to offer. 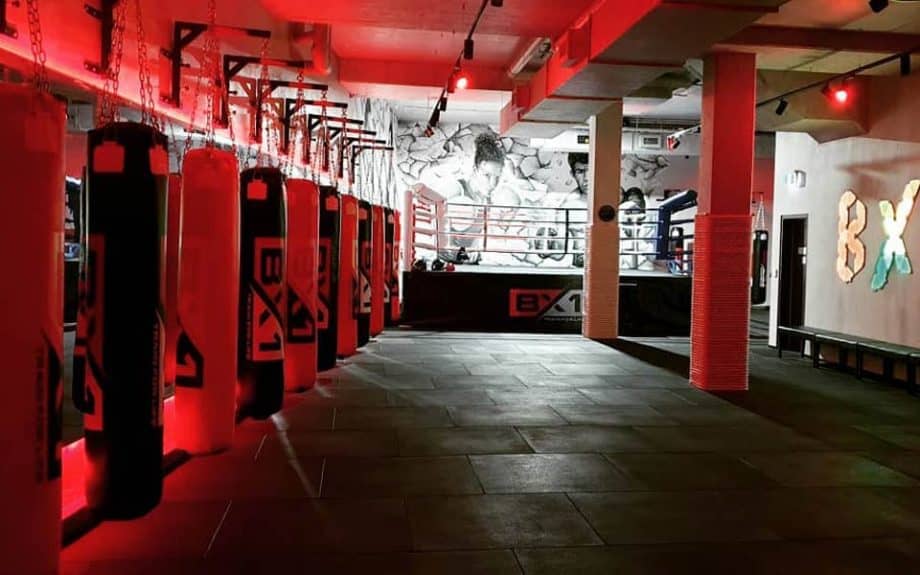 BX1 in Neutral Bay takes the classic boxing gym and gives it a wholly modern twist. Everything here is state-of-the-art and uses the latest technologies. The changing rooms and showers, for example, are just as good as your bathroom at home. Head downstairs to the training floor and you’ll be instantly hit with the realisation that this is a place where you’ll definitely be able to learn the art of boxing, with several punching bags lining the walls that all lead toward the main boxing ring.

Head coach Bill Temm has over 50 years experience in combat sports and has found himself a teaching style that is both incredibly effective and incredibly fun. The rest of the coaching team are all well-experienced within boxing and combat sports, so you can expect a top-notch education. 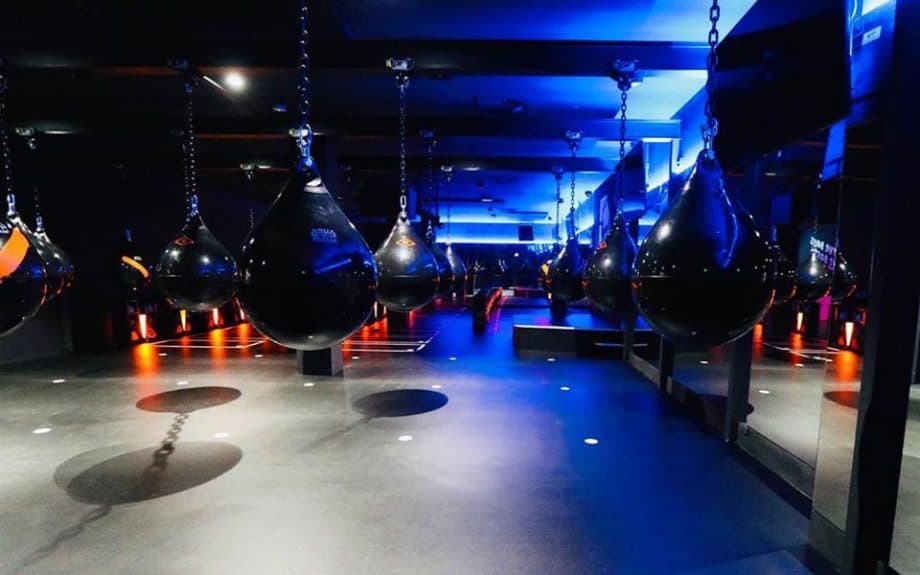 Hustle Boxing isn’t your conventional boxing gym, in the fact that you don’t train to eventually take on one of your peers in fist-to-fist combat in a ring. Instead, it takes the practice of boxing and turns it into a full-body workout that will have you sweating like you never have before.

In a similar fashion to other Instagrammable fitness studios, Hustle Boxing’s main floor isn’t too dissimilar to a nightclub, with little lighting, neon signs and pumping music. You take up a spot on the floor and follow along with the instructor at the front. Each spot has its own punching bag to strike, and classes last for 50 – 60 minutes. You’re also required to put your body through various floor exercises, ensuring you leave the gym a much fitter version of yourself. 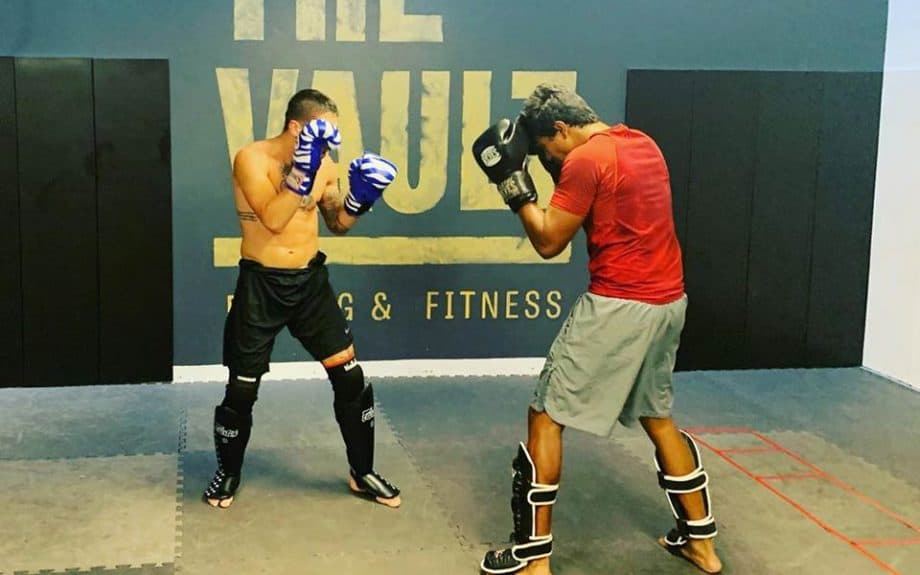 Vault Boxing & Fitness is a gym that does put a strong focus on boxing and its related disciplines (think kickboxing and sparring) but adds in others such as strength, mobility and conditioning, which serve to back up what you learn in boxing classes. It’s a class-based gym, with each class being capped at 10-12 people, meaning you can be sure you’ll receive an intimate and effective education.

If boxing is your main aim, however, then Vault offers a ‘Learn to Box’ course, which places a strong emphasis on learning the very basics of boxing, before opening your eyes to further teachings. You’ll be reaching a pro-level in no time.

The gym itself is a stone’s throw from Central station, is set over three floors and has all the modern facilities you could want. Better still, memberships for unlimited weekly classes start at $34. 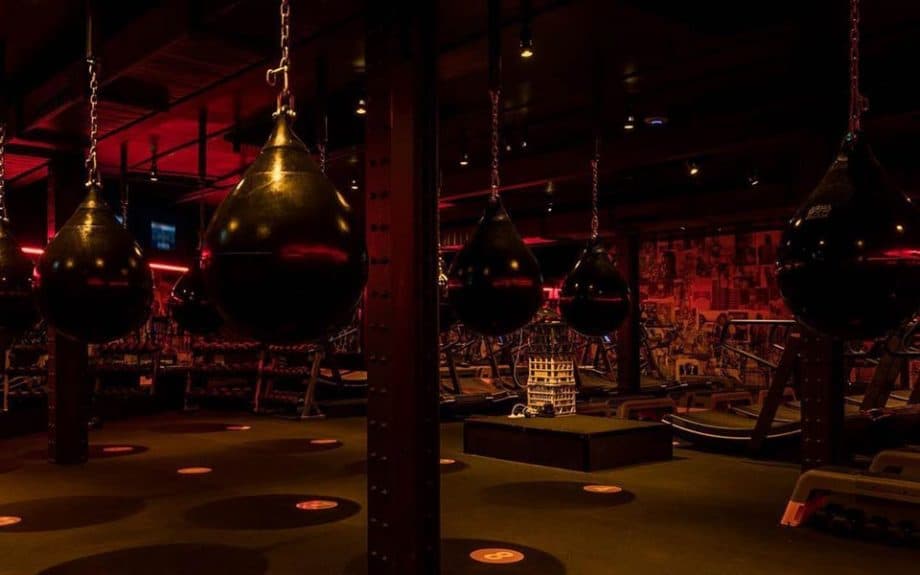 Undercard works in a similar way to Hustle Boxing, in that it is a group-based fitness environment with your own dedicated, water-filled punching bag at your workout station. It also comes complete with a fully-fledged soundsystem that will make you think you’re in a Berlin nightclub.

Each day at Undercard offers up a different workout routine, changing from lower body focused workouts one day, to upper body the next, and boxing & cardio another. If you want to hang up the gloves you can always partake in Undercard’s strength and conditioning classes, which as with the boxing classes, change on a daily basis.

To really hone your boxing skills, you can sign up to Undercard’s boxing workshop with Australian Commonwealth and Olympic boxer Luke Jackson. The four week course will see you progress from the learning the fundamentals to sparring with the best. 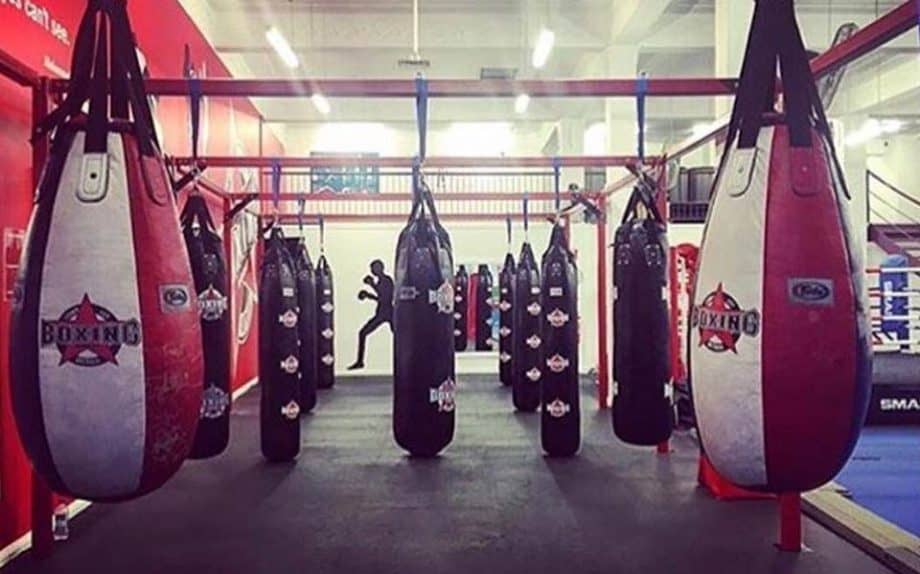 Boxing Works in Kings Cross is owned and operated by Larry Papadopolous, the wrestling skills coach for both the Sydney Roosters NRL team and the Sydney Swans AFL team. He knows his craft, then, and stresses that the entire coaching team at Boxing Works aren’t just some personal trainers who have passed exams to get their jobs.

Instead, they’ve competed in the events and disciplines they teach, so are well-versed in teaching you how to not only learn the correct technique, but to avoid injury too. The Boxing Works gym is home to a centrally-located 5m boxing ring, 18 punch bags, as well as a full suite of cardio equipment, weights, wrestling mats and a power cage and lifting platform. So, not only will you be able to learn how to box, you’ll be able to bulk up into a heavyweight hitter.

If boxing doesn’t turn out to be your thing, you can enrol in Boxing Works’ BJJ, MMA, wrestling or Ju Jutsu classes. 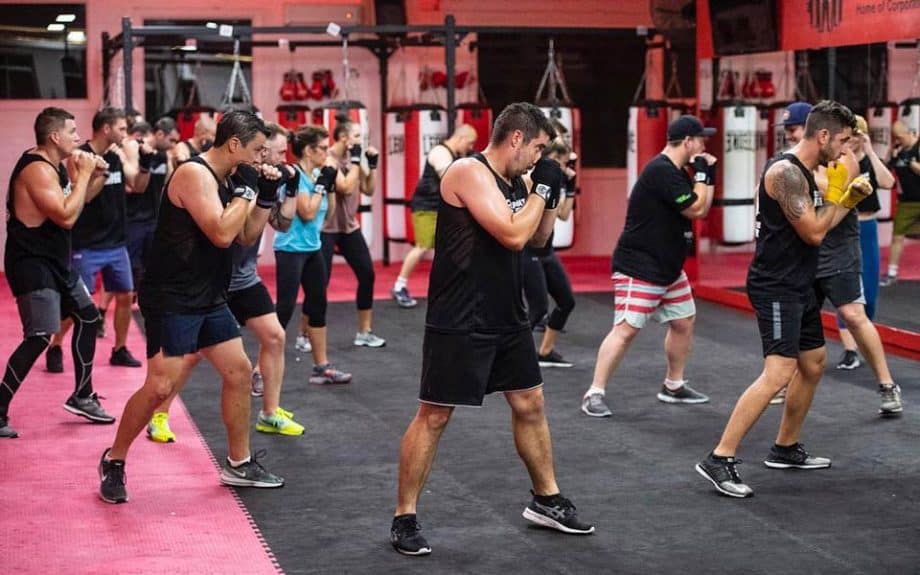 Corporate Fitness Centre welcomes people of any fitness level into the gym. It’s primarily a boxing gym, with several classes through the day and week, designed to teach the basics of boxing as well as more advanced techniques for those ready to progress to the next level. The main boxing floor plays host to a large number of punching bags, which envelop a four-metre boxing ring, as well as the floor area where classes take place.

Corporate also makes use of some of the very latest in feedback technology, with software being able to tell you how many punches you’re throwing, the intensity and the velocity, making it easy to see how you’re improving. For those who really want to take things to the next level, the Corporate Fighter package will put you through 12 weeks of training where you will work towards competing in an actual fight with a fellow first-timer. 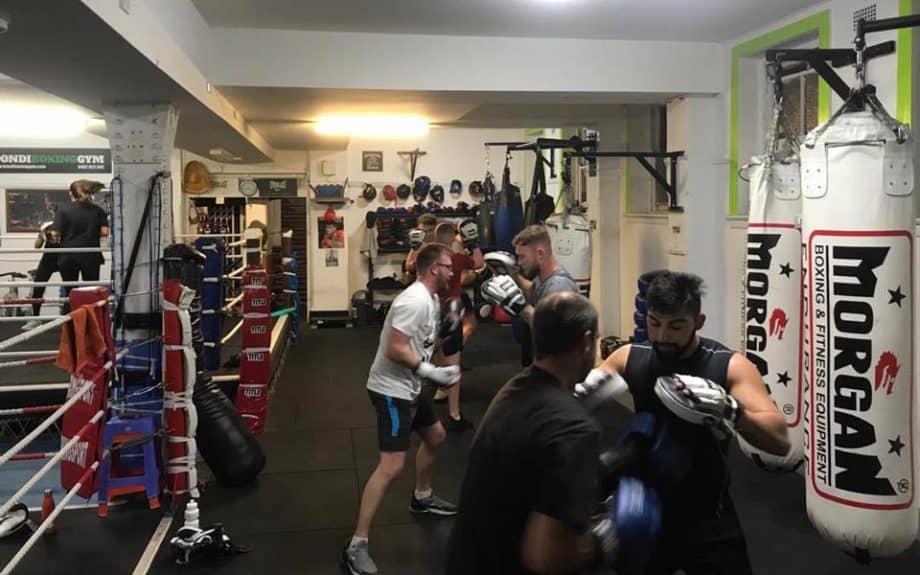 For those living further out in the Eastern Suburbs, Bondi Boxing Gym could be your new go-to. Not only does Bondi Boxing Gym teach boxing from beginner to advanced levels, but you can also engage in some MMA action by way of Muay Thai boxing too. Fitness Boxing is on the cards as well, which adds in more conditioning elements to provide a full body workout.

Head boxing trainer and owner Maydad Ronen is an experienced boxer and trainer, having taught in both America and New Zealand, with the US Youth Olympic boxing program being a current client. His gym is very traditional in its layout and design – there’s no Berlin nightclub to be found here – with a central boxing ring and some punching bags hanging around the room. 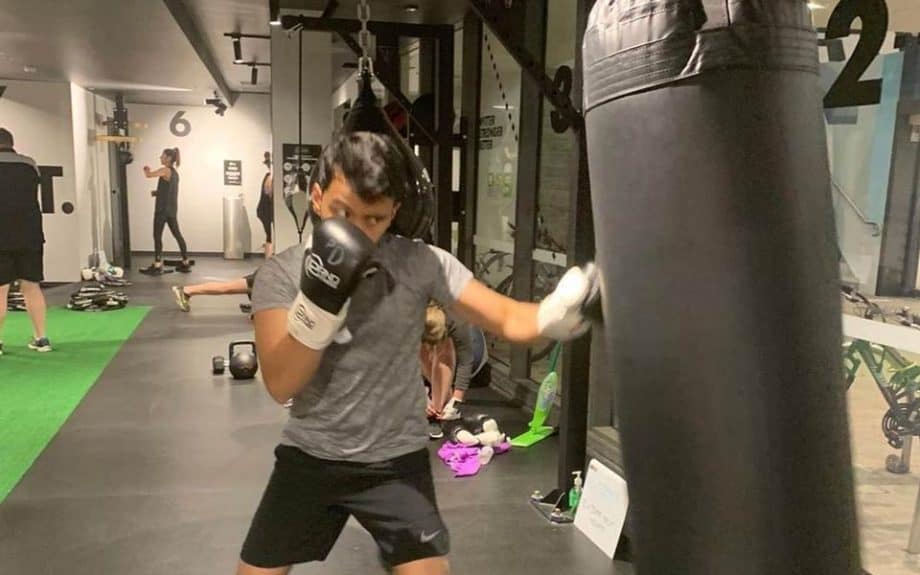 Being named after the maximum number of rounds in a boxing match, 12RND Fitness has a unique approach to boxing workouts. Each workout comprises 12, 3-minute rounds with a 30-second rest between each. You’re free to sit out any rounds if you wish, with a traffic light system letting know either when it’s safe to join in, or when a bout is about to end.

This traffic light system runs continuously throughout the day, so there aren’t any set class times, but whenever you choose to turn up, you can be guaranteed several rounds of circuit training. It’s not just boxing you’ll be doing here, though, as the gyms are also stocked with a range of other fitness equipment to ensure your entire body can build the muscle needed to keep you fighting until the very last round.

12RND is a franchise (there are 78 in total in Australia), so there’s a good chance there will be a studio near you. For the purposes of this piece, we’ve singled out the North Sydney studio.

What are the health benefits of boxing?

Boxing is a fantastic form of exercise that has myriad benefits to your health. Not only does it improve your overall strength, but it can also benefit your cardio fitness, core strength and can help you lose fat. It's even been proven to be a great stress reliever.

Is boxing better than the gym?

Boxing and going to a regular gym are two very different disciplines. Boxing will cause you to become lean and strong while going to a gym will allow you to bulk up more. It all depends on what your personal goals are.

What is a typical boxing workout?

Boxing isn't just all about punching a bag. You will also need to train your speed by skipping and running, and sparring will help improve your reactions.

Barbers In Sydney: The 25 Best Sydney Barbershops To Get A Great Haircut

The Best Sydney Golf Shops To Maximise Your Game