Conor McGregor‘s name might have been made in the ring, but these days he’s also a contender for best dressed man (who could also break your legs).

His style reflects his brash, ‘give-no-fucks’ presence, whether he’s spending quality time with his kid or trash-talking his way through a press conference.

Here, we break down some of McGregor’s key looks and give you a taste of how this ex-plumber has gone from featherweight champion to one of the most stylish gents of the decade. 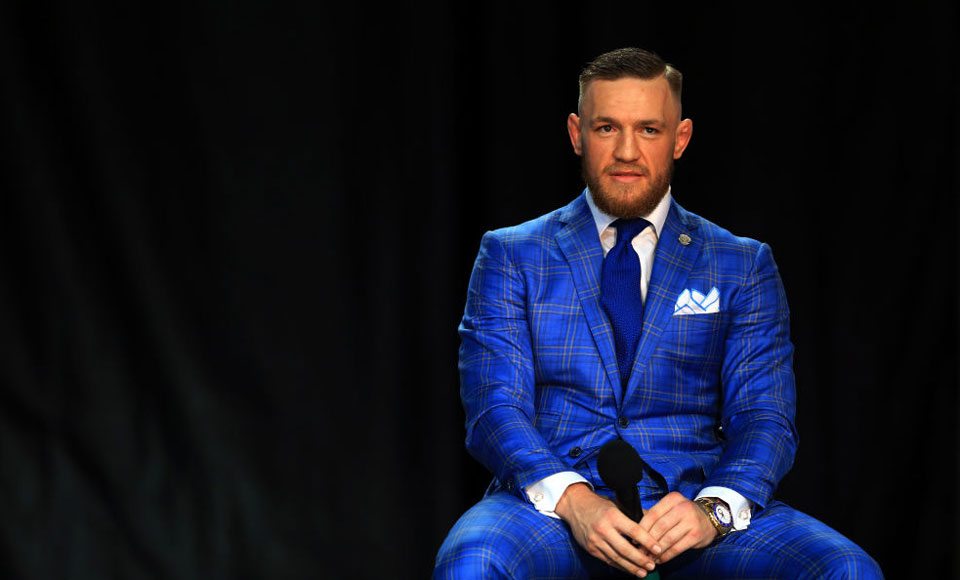 The big man isn’t beholden to any style ‘rules’ or conventions, but there’s a few consistencies across his various looks that are worth mentioning.

Almost without exception, McGregor wears everything in a slim fit. It never looks like he’s being strangled or about to pop a seam, but it makes the most of his athletic physique. He avoids embarrassing pattern clashes, and tends to stick to one big pattern backed up by plain colours.

Lastly, he always wears good, clean shoes that are as expensive as the rest of his outfit – he doesn’t cheap out at the last second. In saying that, he’s Conor McGregor. He can and does break any of those as he likes. 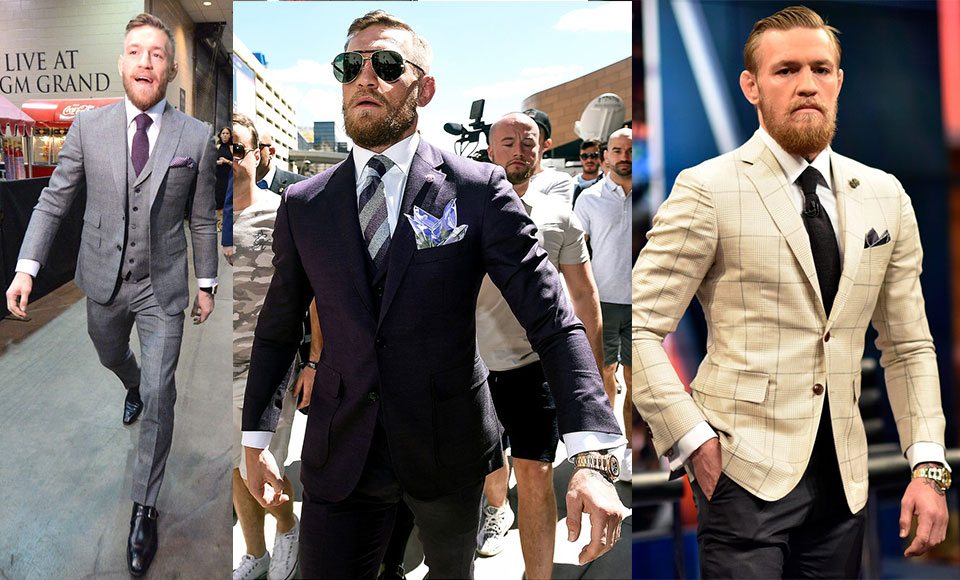 McGregor favours the traditional three-piece suit, not that we’d argue with him on that. This grey three piece features a subtle Prince of Wales check, vastly improved by the addition of a purple tie and pocket hankie.

Note the little things: he shows a little bit of shirt cuff, the waistcoat isn’t too long or too short, and the lapels are proportionate to his tie. 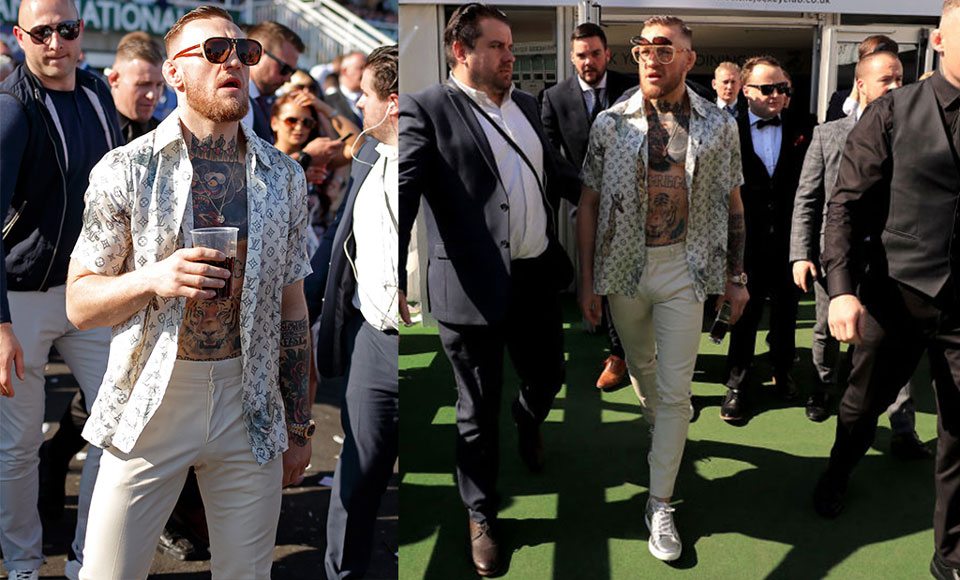 For all its bluster, McGregor’s style is unusual in that most of what he wears can go with other wardrobe staples.

McGregor’s opted for a matching cream shirt and trouser combo, stuck to his general rule of one pattern over a plain pair of trousers.

The monster sunnies add a bit of swagger than not many blokes can pull off, but we wouldn’t be surprised if he subbed out the lager for a diet coke. The biggest draw is the silver and gold Patek, indicating he knows a good watch when he sees one.

Just remember to button up the shirt if you go for a similar look. 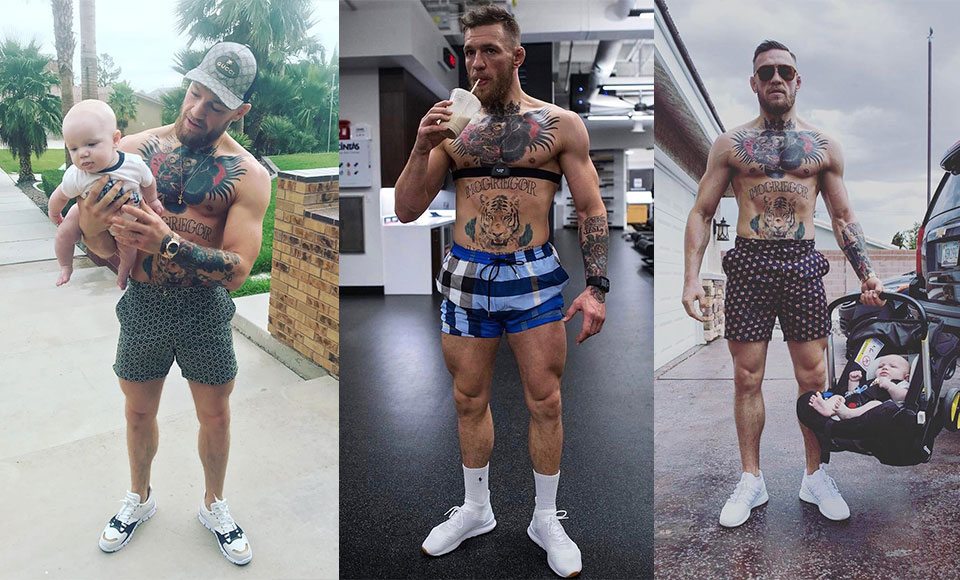 Shorts so short your uncle that played footy in the 70’s would blush, and sneakers (Air Max?) so white you wonder if they only left the box for the photo.

McGregor’s gym style doesn’t include any rubbish Tap Out shirts, back to front caps, or hoodies ‘so he can warm up properly’. He could kick your arse in ten different ways and the way he dresses training for the big day reflects that.

Our only question – how does he plan to kick people so high in those shorts? (We’ll leave it to a braver man to ask). 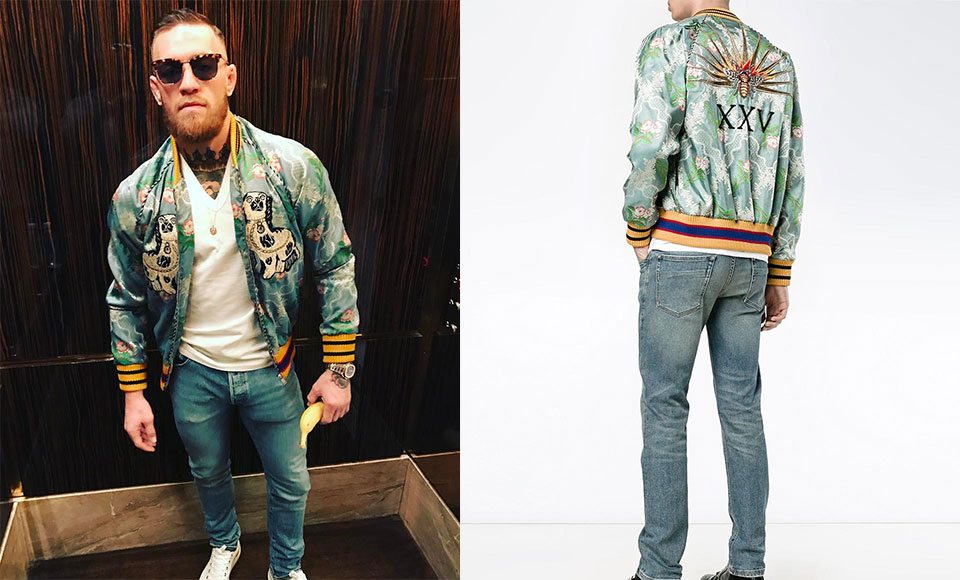 Statement pieces are a staple to McGregor like white shirts and fresh socks are to us mere mortals.

Here, he’s gone for a floral bomber with matching dog embroidery on the front (Gucci, who else?) but he’s been careful to contrast it with a plain white shirt, jeans, and white sneakers.

Everything is built around the jacket, and he doesn’t try to cram prints in anywhere else. He could get rid of the jacket and look like a normal (albeit tattooed and shredded as f**k) bloke in a flash. 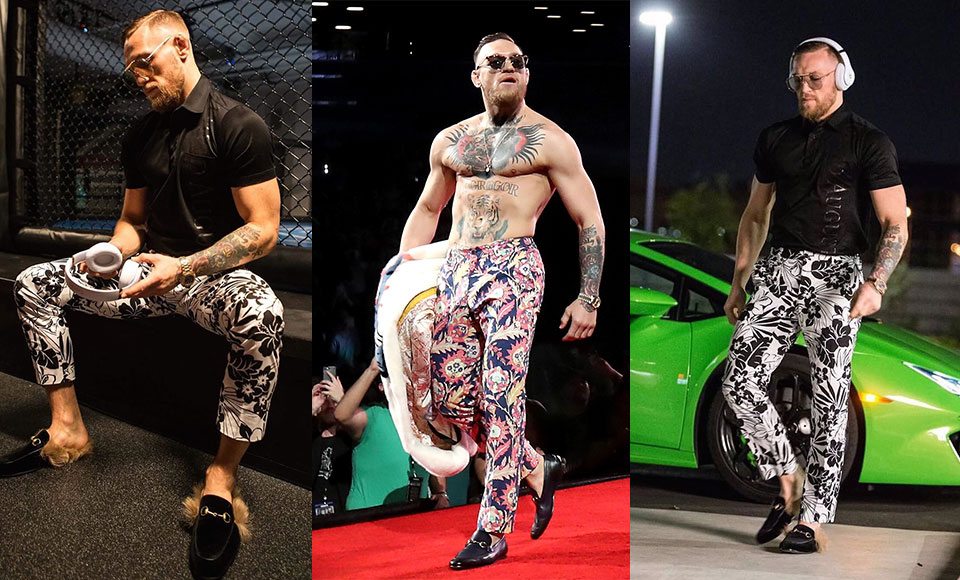 McGregor is a student of the ‘business up top, party down below’ ideology.

Here, McGregor wears a (really snug) black shirt to contrast some bold and beautiful floral pants, both by his partner in crime David August.

Note the colour coordination and finishing touch with Gucci slides. It’s a brave man that can dress on this wavelength, and we wouldn’t be surprised if he got some inspo from Nick Wooster (the modern architect of funny pants). 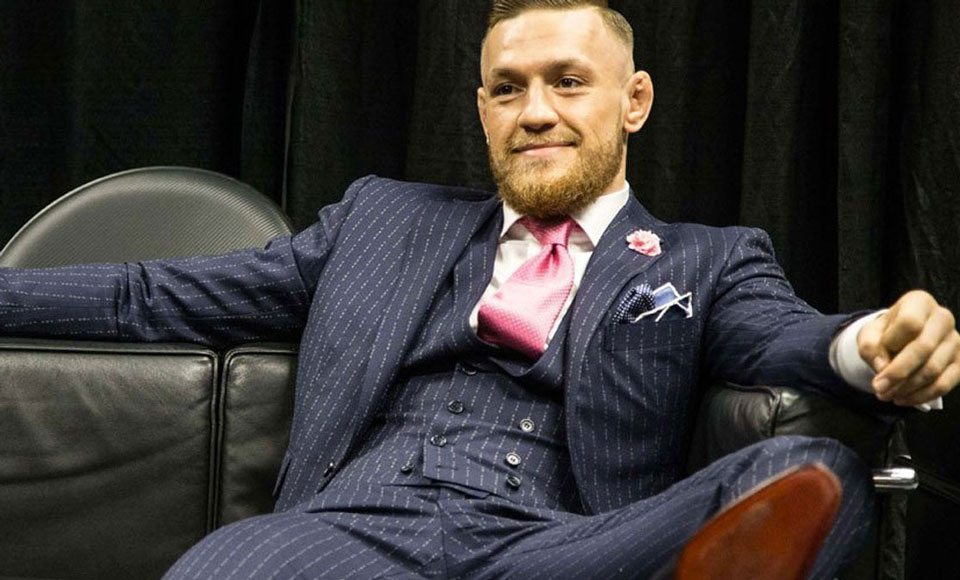 At first glance, this David August suit resembles your typical corporate nine-to-fiver look. He starts with a pink tie and matching lapel flower, which is a little too coordinated for our tastes, but otherwise, everything else is on point. A crisp white shirt, quirky ticket pocket, monk strap shoes, and a slim cut could see him as a law or finance guy in another life.

The only obstacle to that illusion? The ‘pinstripes’ happen to spell out his thoughts about Floyd Mayweather, in typical McGregorian understatement.

We haven’t seen it replicated, but it’s only a matter of time. McGregor is set to launch a collaboration label with August sometime soon, so we wouldn’t be surprised if we see stuff like this in the future.

How To Get Daniel Craig’s Style; The Last Bond

How To Get Kanye West’s Style; The Master Of Zero Cares Fashion

Gianluca Vacchi’s Before & After Transformation Will Blow Your Mind

How To Get David Gandy's Style; The Best Dressed Man In London

How To Get David Beckham's Style In Five Easy Steps