We’ve all heard of the Running of the Bulls, a 10-day fiesta where you get chased down cobblestone streets by day and consume too-many copas by night. But as much as this Mexican ( Basque?) standoff between animal rights activists and revellers is a world-class party to behold, there’s an even weirder one off the tourist trail: Los Escobazos.

Los Escobazos takes place in Jarandilla de la Vera, a small village  no where near Pamplona, in Spain’s Extremadura region. Known for: ham, pork, bushwalking. Not known for tourism, nightlife.

Celebrating the immaculate conception with a scene straight out of hell, the literal meaning of Los Escobazos is “the broom hits.” The problem with translating it is escobas are “brooms” in the same way AK47’s are “pistols”. These ~bundles of sticks~ start off 20cm wide and one metre long, wielded by kids. But as the night goes on, escobas 3 metres long, wider than Señora Kardashian’s hips start to appear, hoisted by groups of 10 or so villagers. The idea throughout the night stays the same though—run around “sweeping” (read: hitting) people with your flaming implement. All in honour of Santa Maria.

How The Night Progresses 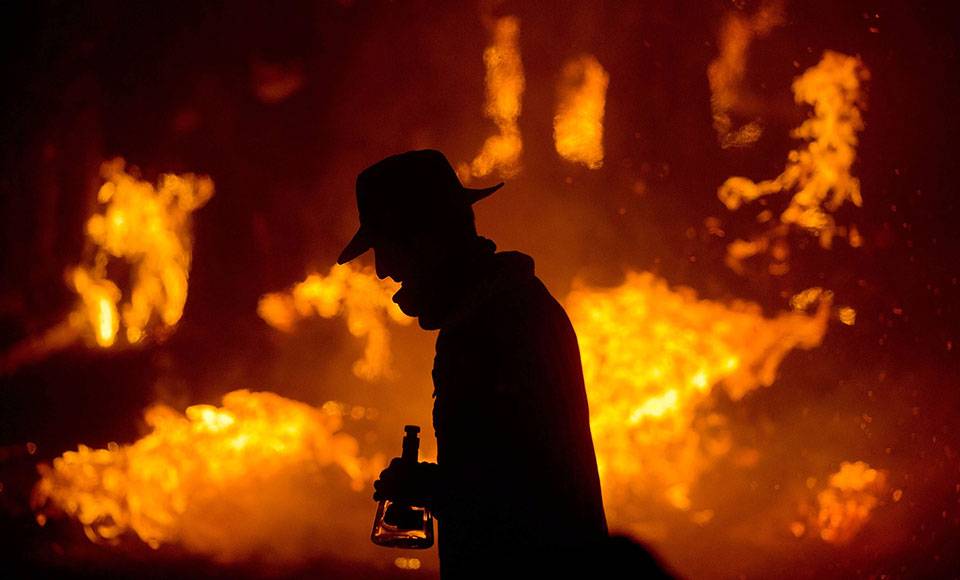 At this point the town plaza is full of “refuelling stations” (fires), and people, young and old, running madly with flaming brooms. Whilst drinking aniseed liquor from pigskin bladders. And although you’re not allowed to hit above the waist, the flames often extend well overhead. This is accompanied by chanting, which reaches a crescendo as the clock strikes midnight. At this point the “fire fighting” comes to an end and a religious procession comes out of the church, flanked by horses bearing Virgin Mary banners. Everyone then makes their way to a three story tall, christmas-tree-shaped pile of wood, which is not-so-promptly set alight (they don’t set it on fire until the entire procession has arrived).

This catholic celebration of the sweet Virgin Mary didn’t come to look like a satanic cult all on its own. Although the exact origin is unknown, locals say the tradition stems from ancient shepherds, who would light their way down the nearby mountain with blazing torches, then have some fun putting them out when they got home. Ever since this unspecified date, Los Escobazos has been held every year on the 7th of December.

At the beginning of the night, before they bring out the flaming, tree-sized ‘brooms’, you could be mistaken for thinking it’s just a quirky equivalent of Halloween. People chat in tapas bars, kids swipe pint-sized escobas around the plaza, and a particularly repetitive (albeit catchy) hymn is sung.

But then the wine-fuelled bravado kicks in. It’s at this point, as the chanting grows louder, that you realise this is no commercialised public holiday. Nor is it a festival that caters to inebriated antipodes—guiris are welcomed, but receive no special treatment. Buy a cheap, plastic, fireproof(ish) suit from the ultramarino if you can.

For those harbouring inner pyromania or masochistic aspirations: absolutely. You are far more likely to get injured (albeit less fatally) at Los Escobazos than you are at The Running Of The Bulls. It also feels like more of an adventure, because it’s well off the gap year trail, and you’ll be more of a novelty to the locals than you are in many other places. You might melt your shoes, and get a few singed leg hairs, but other than that you’ll be fine.