How To Wear Camouflage Print, Without Standing Out Like A Sore Thumb

When out in the jungle, or on safari, camouflage is traditionally worn to help the wearer blend in with their surroundings. That’s not exactly the case when wearing it down the high-street as part of a look, with the intention there being to rock a print not attempted by many people.

But while camouflage may be used as a means to differentiate yourself from the crowd and to stand out, there is still a right and a wrong way to go about it. Fortunately, you have plenty of options when it comes to wearing camo, with the print being used for t-shirts, jackets, pants and all manner of accessories, for those who wish to play things a little safer when adding the print into their look.

Lining them up one by one, let’s take a look at the key camouflage pieces to help you stand out, without looking out of place. 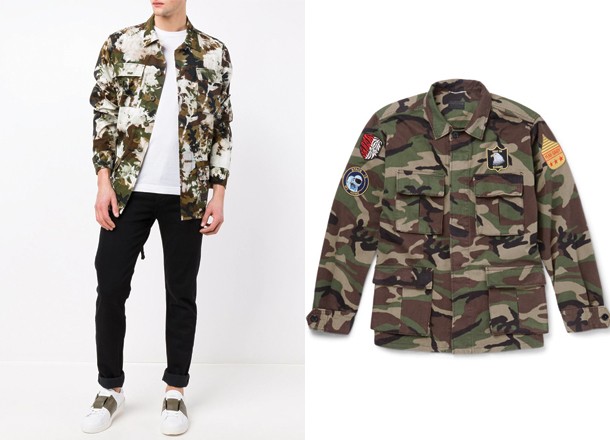 Getting specific, it’s the field jacket – and the coat’s army origins – that make it a no-brainer camouflage companion. But, as menswear forays into the fashion-forward, the field jacket takes on starker camo-colours (bright khaki) and bolder army accents (flashy patches and logos) that work in making the top layer stand out as a statement piece.

While the print has changed, the jacket’s fit has certainly returned to form, with designers adopting a military-inspired boxy silhouette and multiple utilitarian-style pockets, making it just as stylish as it is practical. For a fashionable weapon in the awkward in-between season, layer an open camo shirt-jacket over a plain white t-shirt, black jeans and sneakers, keeping the under pieces monochrome for a cleaner platform from which the camo-coat can launch. 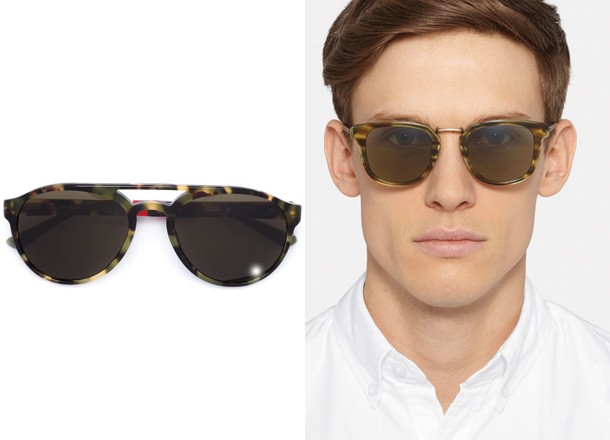 More a pacifist in regards to army print? Accessories are a great way to get a little burst of camouflage into your wardrobe. While sunglasses are literally an in-your-face take on the season’s military fascination, you’ll fare well without too much prior training to pull it off.

Why? Camouflage sunglasses are similar in pattern and hue to tortoiseshell. Helping camo’s cause, designers are releasing classically-styled sunglasses for men – D-frame to acetate aviators – that are lightweight but sturdy and far from boisterous. So as a camo rookie, you’ll be comfortable wearing the army print, before you progress up the camo ranks to sergeant. 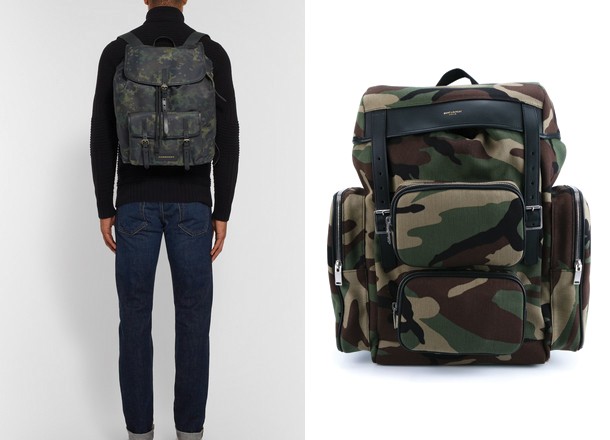 A less incognito accessory for camouflage is the backpack. Living up to its utilitarian way, the backpack remains functional in form (strapped to the back), but also relishes in the rebellion of misspent youth as a schoolbag carryall.

This season, designers are releasing canvas-printed models with a plethora of pockets and buttery black leather trims, lifting the luxury up notch. But they’re more affordable than their all-leather fellows. Bucket varieties – with a drawstring top closure – as well as satchel-esque designs are big among high-end brands too. Whatever your material and model of choice, the camo-backpack makes for an on-point work bag (in darker hues) and something off-duty in more distinct shades, adding interest to a typical black sweater, jeans and white sneakers ensemble. 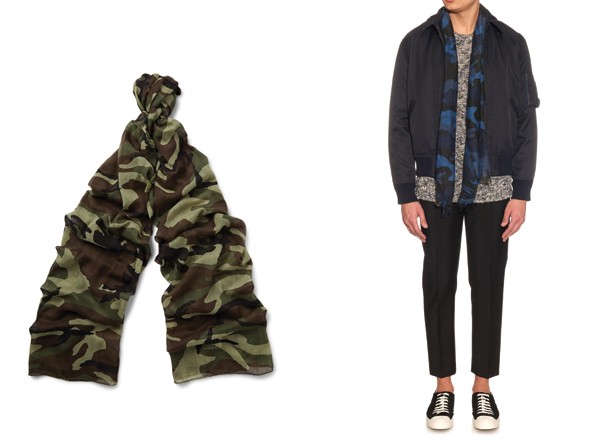 The ultimate depth-addition to any ensemble, the scarf takes a military stance on layering with camouflage. But not too heavy-handed. Made from fine gauge wool, designers are crafting remarkably lightweight scarves that are mid-length and made to hang undone and symmetrical, across the front of waffle-knit sweater, chastened by an open bomber jacket.

Coming in various shades of blue too, the camouflage print makes it a cool change up from the typical tartan checked or striped scarves a lot of men will be wearing this season. Get a camo one in a lush silk-cotton blend, and you’ll be wearing it whatever the season, and for years and years to come. 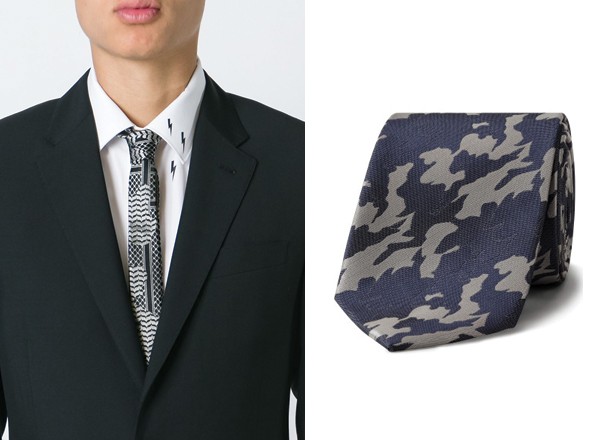 Camouflage can even have a place in the office. Before the thought of a camo-print suit fills you with sartorial fear, we’re talking more the finer things in workplace attire: ties. The traditional olive green in camouflage takes a demotion, replaced by navy, making it more office-ready with a white shirt and sharp charcoal suit.

Fancier still, camo-print has been modernised by some designers, constructing shapes from graphic, digital-looking patterns that still carry the camo aesthetic. The subtle geometry of the tie gels intimately with stripes on tailored blazers, and printed bombers and shorts in summer. Just keep the shirt white, and overall palette neutral; playing around with tone and shade to suit your taste. 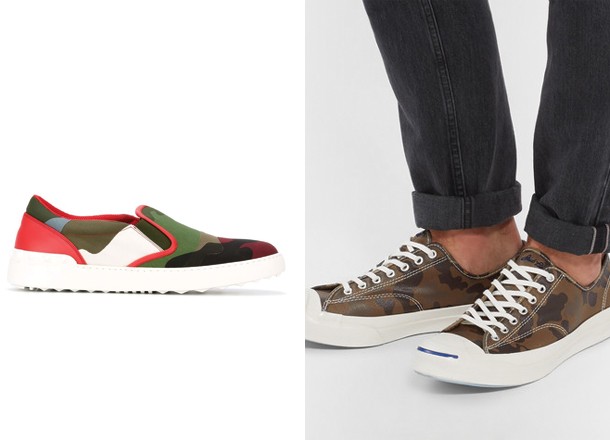 The sneaker is a sartorial staple for men now. And with luxury brands jumping on the sneaker run, designers have had to find new ways to dress the sneaker, making it look anything but gym-ish. And prints such as camouflage have been enlisted.

This season the camouflage colour combinations get more interesting and so do the sneakers who are recipients of the print. Slip-on sneakers that combine khaki colours with pops of vivid red or blue, are the perfect mix of active accents with utility charm. Wear with a soft-shelled two piece suit and t-shirt for a dressier weekend look or go super urban with jogger pants, a tee and nylon anorak. And leave the socks back at base-camp.