It’d be dumb to dub double breasted blazers as dated, stuffy, grandpa-esque. A sophisticated cut, the double-breasted suit has been adapted for the modern market. And we’re relishing in its timelessness.

The double-breasted fit has been spotted on the shoulders of some of menswear’s most stylish clothing – Lino Leluzzi, Lapo Elkann and David Gandy. Ideal for the man who wants to pack a style punch, double-breasted blazers or suits in quality fabrics, neutral or subtle prints and a slim, tailored fit makes the perfect addition to your wardrobe. You’ve got nothing to lose really. Going DB isn’t double the trouble, but it’s double the fun.

Buttons and buttonholes came into fashion in the 13th and 14th centuries, when tailored clothing replaced draped and pinned garments like cloaks. The new construction necessitated a row of buttons that held the inside and outside layers of fabric together. To maintain the symmetry of the garment, a matching row of buttons was added on the opposite side. By the 1800s, frock coats were in fashion and came in both single- and double-breasted styles. As long coats gave way to shorter jackets in the late 19th century, the double breasted style took on a more familiar form. Double breasted blazers as we know it today originated from naval reefer jackets, more commonly known as pea coats. Anchors, away.

What Is A Double Breasted Suit

The term ‘double-breasted’ refers to a coat or jacket with two parallel columns of buttons and overlapping front flaps. The typical double-breasted blazer has one to four rows of buttons, only one or two of which are functional. A ‘number-on-number’ structure is used to describe the construction of a specific jacket, in which the first number is the total number of buttons and the second number is the number of fastening buttons below the lapel.

So, for example, in the case of original double breasted blazers with six buttons total and three to close, the term “six-on-three” would be used. Another functional button, called the jigger or anchor button, is concealed inside to hold the overlapped layers together and strengthen the fastening. The lapels are most often peaked, and the left lapel typically fastens over the right.

Like a regular suit – man’s most flattering fashion item – the double-breasted cut broadens the shoulders and brings in the belly. But, it does favour certain body types more than others – a style for leaner men. A larger gent’s build will be widened by the double-breasted structure, creating an unflattering optical illusion. However, if you’ve got the build for it, a double-breasted suit emphasises the broad shoulders/narrow waist silhouette or ‘V’ – considered the ideal male shape.

Where To Wear Double Breasted Suits

If you’re attending a more formal or semi-formal event (in a setting with conservative people who may not understand your choice of jacket), stick to single-breasted, because a double version will certainly stand out. But, when cutting loose and showing off your sartorial mastery, come a summer party, wedding or Saturday night out with the lads, the double-breasted blazer is a daring departure from the single-breasted status quo.

How To Wear Double Breasted Suits

Unlike the good-old-days, today’s double-breasted blazers are sleekly tailored and cut shorter. The jacket sits close to the body but doesn’t hug, and the armholes are cut higher to create a cleaner look. The shoulders are natural, soft and tailored rather than sharp and bulky (no more 80s Wall Street stockbroker). Overall, it makes for a double-breasted suit that retains its original sense of elegance while embracing modern minimalism. Here’s how to rock it:

The office is the perfect place to sport a double-breasted suit, standing out from the corporate crowd. For everyday work, simpler is better, opting for a 6×2 button constructions. Fasten the middle button while leaving the bottom undone, and keep it that way – standing or sitting down. The anchor button should also remain fastened at all times.

For the purist, select a pinstripe navy number. While contemporary guys should look to charcoal based out with tan monks – this season’s work shoe.

“Double breasted suits are a statement on their own, so don’t feel like you need to go over the top with loud prints and patterns. It’s also important to build your staple colours like navy, grey, black and maybe a subtle check if you’re feeling a little game.”

For winter and cooler temps, opt for double breast two piece suit with 4×2 button construction in textured woollen fabric. With a peak lapel and slightly longer cut, the jacket even doubles as a a top coat. A roll neck sweater is the perfect layering piece, sticking with a fine-gauge cashmere/wool blend for a luxury finish.

Aesthetic, its a clean look (without a bulky scarf and add outerwear) and is a fresh alternative to a shirt and tie combo. Just fasten the top button of the jacket, and the anchor button, keeping them both closed to keep the heat in.

“We wear double-breasted suits undone a lot more than we used to. If you are going to button them up, leave the bottom button undone like any conventional suit – the last button is always left undone.”

Smart casual dressing is easy with the double-breasted suit. The easiest way to dress down the jacket’s formality is the split, pairing the blazer with chinos or dark denim. As a general rule, the more unstructured the jacket, the more casual it is. Keep the shirt and tie for a smarter look or inject a knit or crew neck t-shirt into the mix for pared back look. Likewise, your footwear can go anywhere, from leather derbies to tassel loafers. Oxblood is a nice alternative to black or brown.

“Try trousers and waistcoat in one pattern and the blazer in contrasting pattern and colour,” says Jeff Lack.

“A matching suit is always good, but don’t be afraid to mix and match your colours. If you want to play it safe, start with a double-breasted navy blazer and beige trousers.”

White trousers and the double-breasted blazer are like two peas in a rakish pod. The jacket’s seafaring roots – with links to the peacoat – make it the perfect blazer for summer. And a sharp outer layer when going for that clean nautical look. A white collared shirt in crisp cotton is the perfect base, letting a royal blue or red jacket helm this style boat.

A navy knit tie and white dial slim watch with a navy, red and white canvas strap and are key accessories. As for blazer details, look for a grainy linen-silk blend for a texture and contrast white buttons are very de rigeur this season. Ties in the white trousers nicely. Just add suede loafers.

Denim never dies and proof of that is its compatibility with the double-breasted suit blazer. The rule is to pair skinny jeans with double-breasted blazers, but not just any standard blazer.

“I wouldn’t do a plain double-breasted blazer with denim but a patterned one – some sort of check would be good.”

And the big no-no in the double-breasted-denim game?

“A plain navy double-breasted blazer with blue denim will make you look like you’ve accidentally split up your suit, or soiled your trousers and just needed to put some jeans on.”

In other words, trust in the blazer patterns if you’re going to rock jeans.

Staying casual is one thing but staying cool is another. When the weather heats up there’s no need to ditch the double-breasted suit.

Jeff Lack says it’s a slightly more relaxed look, so you’re allowed to wear it with a t-shirt and sneaker combo. But be wary of the quality of your tee and sneaker choice.

“When wearing a double-breasted suit with sneakers, make sure they’re a pair of clean white tennis shoes and stay far away from casual tees (ripped, raggy and weathered) as they are too casual,” adds James.

A crew neck tee in a plain colour like white will do the trick nicely.

For the rare occasion where the mercury is as high as the dress code, it’s time to call on an unlikely wardrobe ally. The tailored short. There are clear rules to rocking shorts with your double-breasted blazer to avoid looking like a car salesman from the Bahamas.

“It would have to be a really light blazer fabric so linen, cotton or seersucker double-breasted shell with shorts. And again, don’t button it up. Leave it unbuttoned,” says Jeff Lack.

Rebecca James adds that accessories such as pocket squares and spectacles tucked into the chest pocket are also welcome with this lighter look. When it comes to polo duties, a man can’t go wrong with a nice pair of shorts, a tucked-in shirt and double monk straps or loafers.

What is a double-breasted suit?

The term 'double-breasted' refers to a coat or jacket with two parallel columns of buttons and overlapping front flaps. The typical double-breasted blazer has one to four rows of buttons, only one or two of which are functional.

Are double-breasted suits good for the office?

If you want to show off your style prowess, then yes, absolutely wear a double-breasted suit to the office. However, for many, a single-breasted suit will prove to be a much better option. 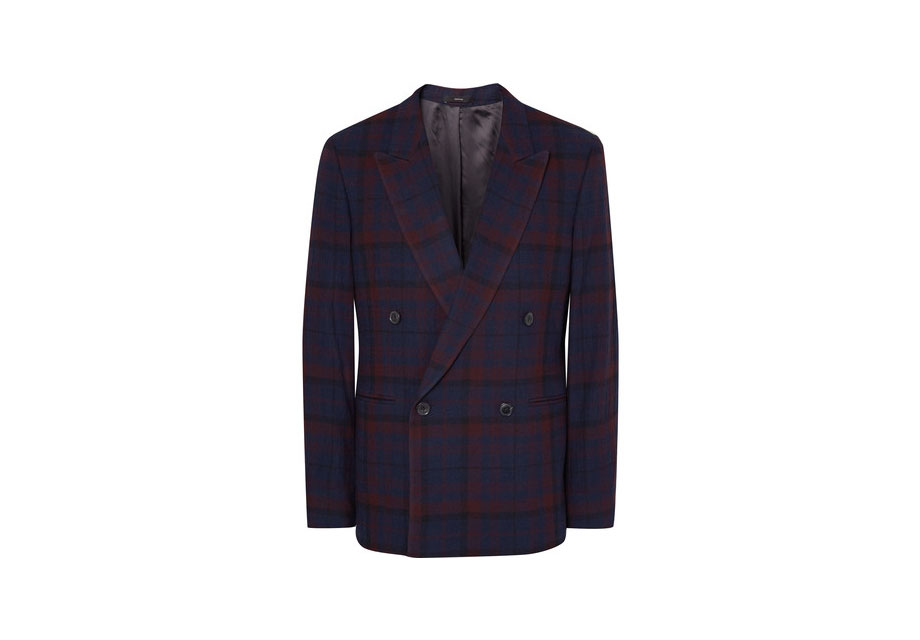 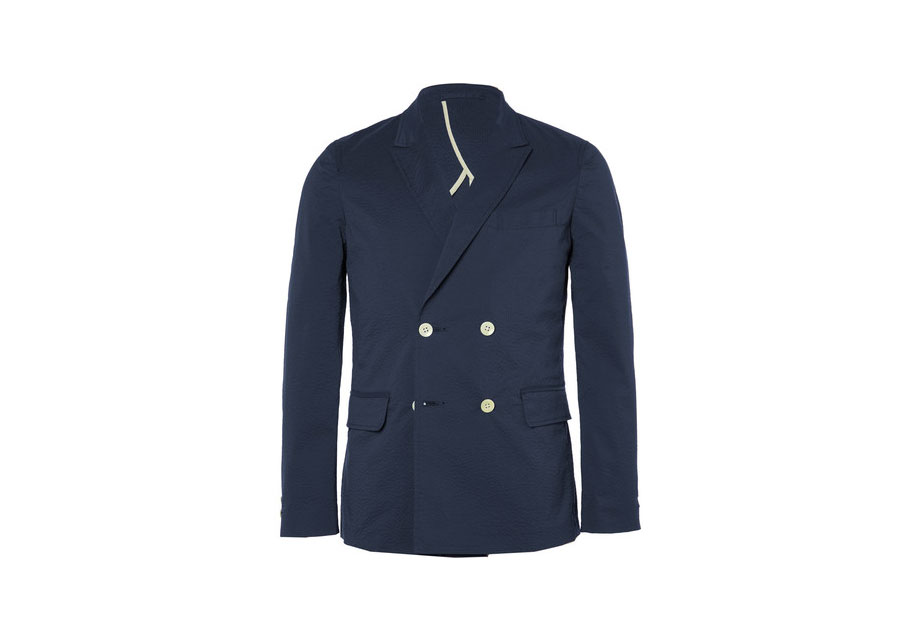 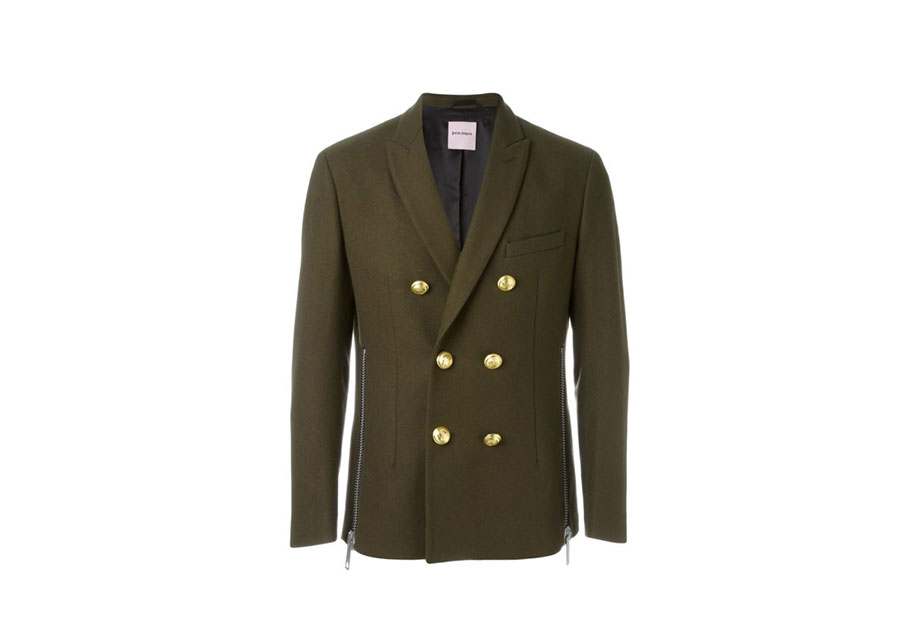 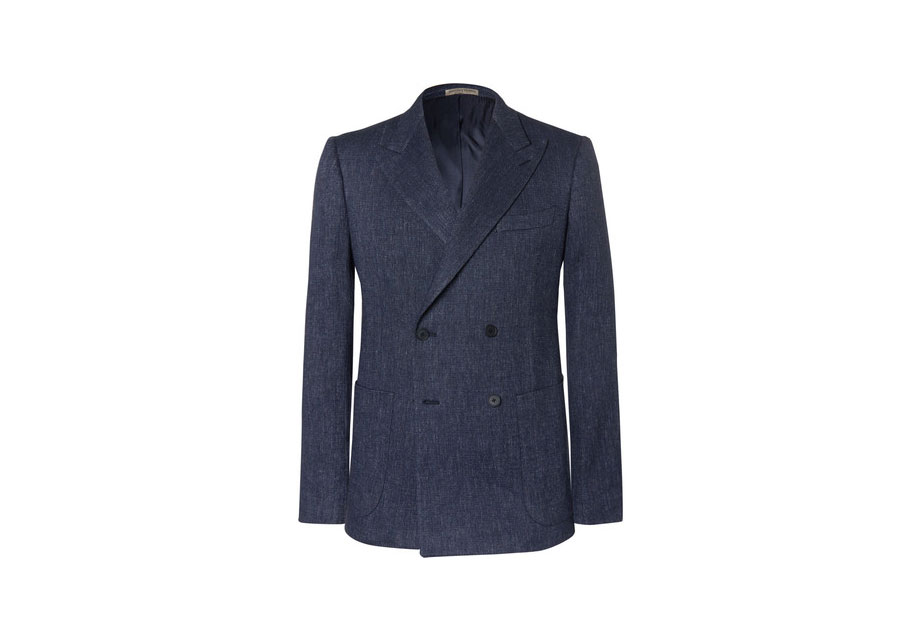 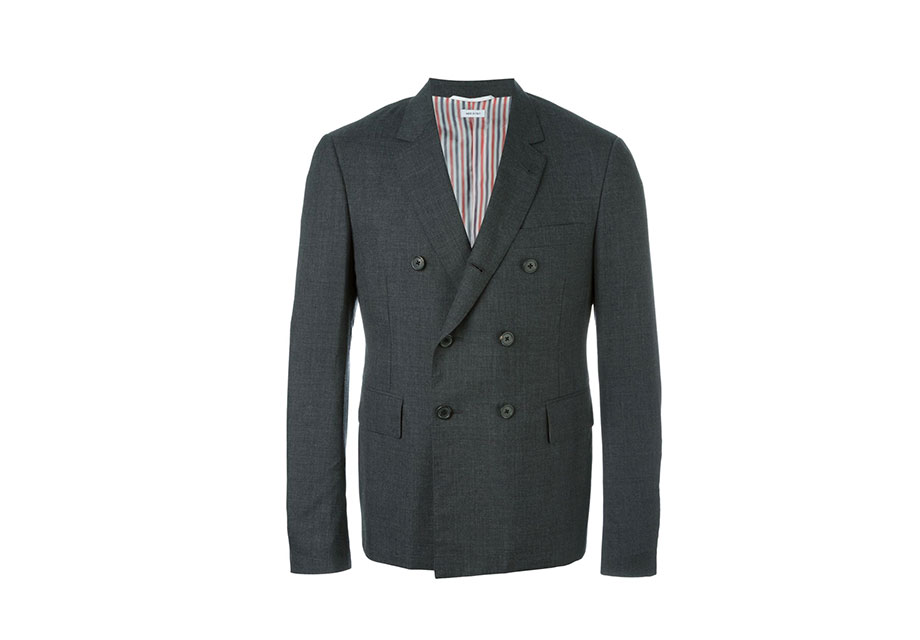 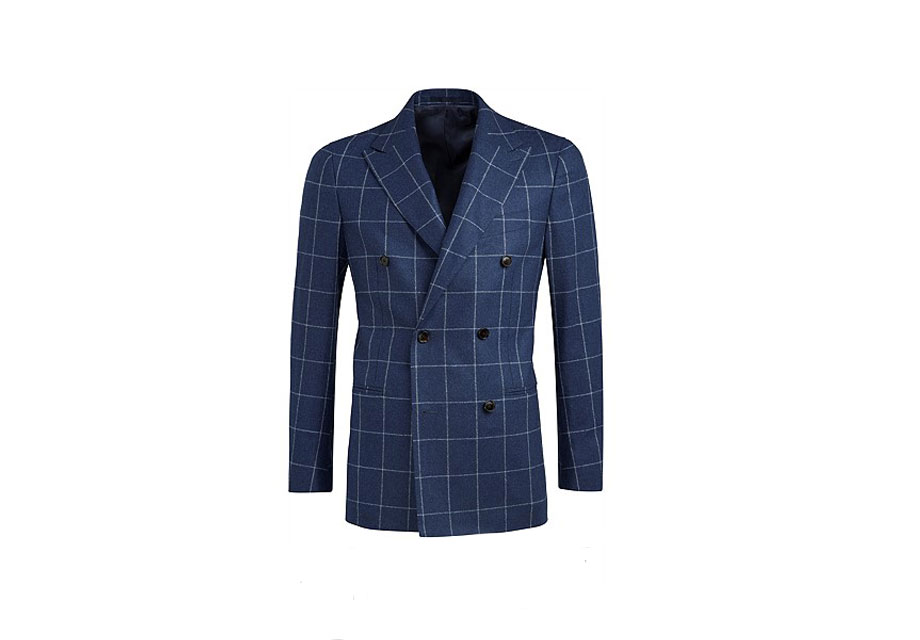 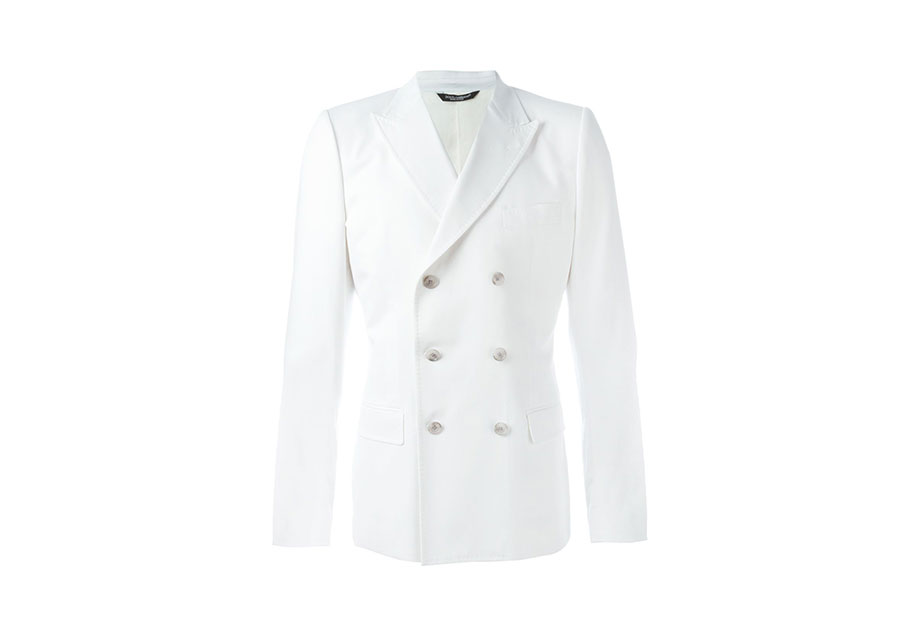 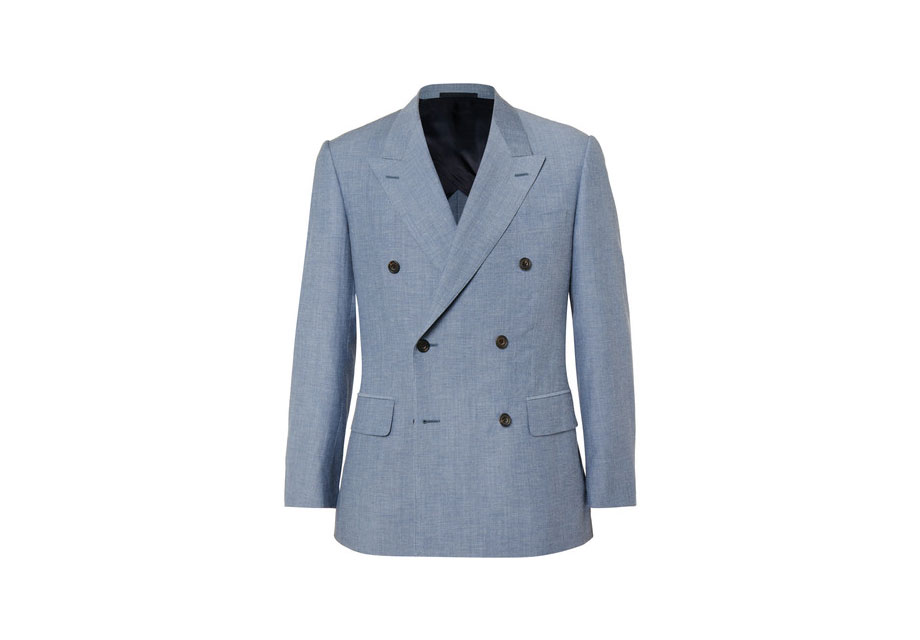