There are two things we can be sure of in the world of Formula One. Firstly: Lewis Hamilton is one of the greatest drivers to have ever graced the tarmac. And secondly? Lewis Hamilton will continue to experiment with his personal style.

No sooner have we seen the British motoring ace don an outfit that wouldn’t look out of place in The Matrix, he has now been spotted in France looking well-prepared for a weekend festival.

Turning up to the Circuit Paul Ricard ahead of this weekend’s French Grand Prix, Hamilton found himself posing in front of the Mercedes team truck in head to toe black and green. Not quite the same shade of green as can be found on his Mercedes-Benz F1 car, but it’s good to see he’s trying to help fly the flag for the seven-time Championship winning team (who are currently sitting in an unusual second place behind main rivals Red Bull).

It’s Hamilton’s boots that have most tongues wagging, however, and as well they should. Hailing from Italian luxury fashion house Bottega Veneta, they’re appropriately called the Tire Boots. Something no doubt close to Lewis’ heart. Retailing for US$1,200, the vegetally-tanned leather Chelsea boots certainly make a statement. 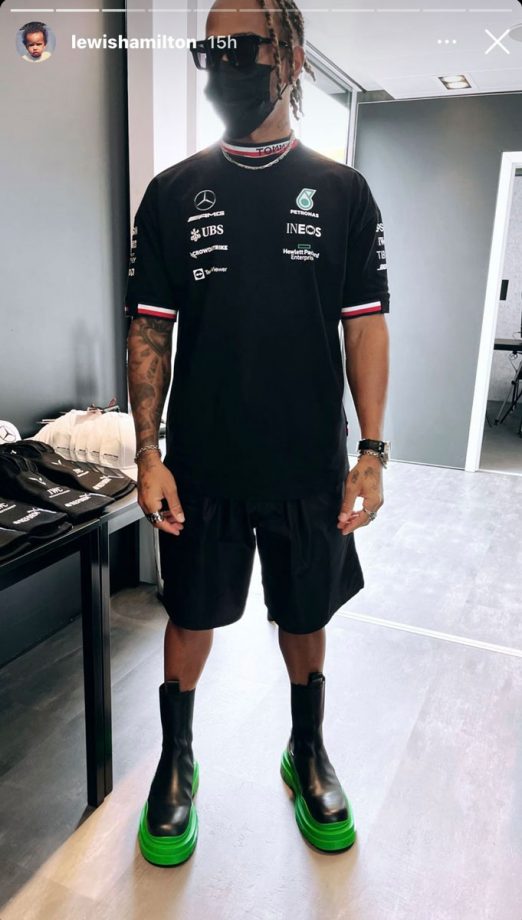 In fact, Hamilton was clearly so enamoured by his latest acquisition that he even chose to wear them at any given notice, even when changed into his customary Mercedes-Benz attire.

An outlandish outfit for many, but just another day in the life for Lewis.

He goes into the upcoming weekend second in the driver standings, four points behind Max Verstappen, where he’ll be hoping to improve upon his 15th place finish at the previous race in Baku at the beginning of June.