This year has been challenging. But adversity brings opportunity. So as jets stopped flying and passports gathered dust in draws, summer 2020 offered incredible potential for European residents to explore the destinations of their dreams – sans crowds.

It goes without saying this comes with risks. But if you’re young and over there, we’d argue: why not. It seems we’re not the only ones with that mindset: European tourists can currently be seen drinking rosé all day in Croatia, hiking in Spain and posing awkwardly by the pool in Greece (Instagram doesn’t lie).

As we reported last week, some have taken it too far, with ‘rogue’ Mykonos parties sparking new Coronavirus fears in Greece. That said, for those with the money to spend and the right mindset, for the time being (provided confirmed cases don’t get out of control) there are some incredible deals to be had.

Enter: the following photo. Posted on Thursday by 4.5-star hotel Cavo Tagoo Mykonos, the image depicts ‘high end content creator’ @missangievilla with her partner @jeremyaustiin in what can only be described as paradise.

The image was posted by Jeremy a few hours earlier, captioned, “Finding new reasons to fall in love all over again at the one and only @cavotagoomykonos.”

It’s not the only location the couple have been snapped at (or posted of) this European summer. A stunning picture from Italian locale Merano gives Mykonos a run for its money.

Right now though, it appears the couple is currently staying at the luxurious Cavo Tagoo Mykonos hotel, where prices start at $1,063 a night. 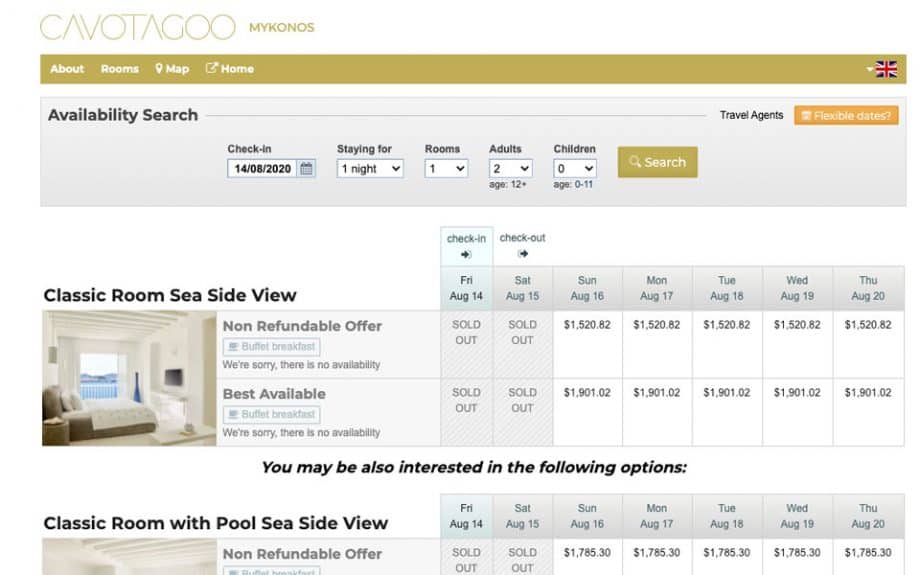 This isn’t the first time Cavo Tagoo Mykonos has given its followers a severe case of envy. Cavo Tagoo Mykonos appears to have been operating on a ‘FOMO as usual’ basis of late, showcasing everything from the pool views of their sister hotel in Santorini…

… to the outrageously ‘grammable sunsets in Mykonos.

Not to mention the outlandish food, drink and spas.

Perhaps the most jealousy-inducing post can be traced back to February the 2nd, a simpler time just before all the travel bans came into full effect, which shows a blissful moment many of us could really do with right now.

It’s not just Australians wishing for this. Comments like “can we escape the lock down for here already” and “missing it!” left beneath various Cavo Tagoo Mykonos photos show some high profile Americans are a little salty they are unable to fly the coop this for this northern hemisphere summer too.

However, since the set back in Victoria (and as cases hover on a knife edge in NSW), Australia’s travel bubble negotiations, even closer to home – with countries like Bali and New Zealand – have been put on ice. So Europe remains, for now, a pipe dream.

For those looking for an alternative, it’s not like we’re short of luxury options right here though.