Whether it’s because your boss has finally stopped wearing suits or you’re going somewhere upmarket in town, learning to mix and match separates is a worthwhile skill to have on your sartorial CV.

As business workplaces becomes more casual and the lounge suit continues to fall into disfavour, shedding the suit and mixing up separate jackets and trousers is becoming an exercise with which more and more men are becoming familiar.

However, it’s not quite as simple as grabbing your favourite suit jacket and a pair of chinos and hoping for the best. But like any part of men’s fashion, all it really requires from you is observance of a few basic rules.

Here, we’ve simplified the separates game. It’s not too hard, gents, and definitely not the most important thing you’ll do with your week (we hope).

Get Your Patterns Right 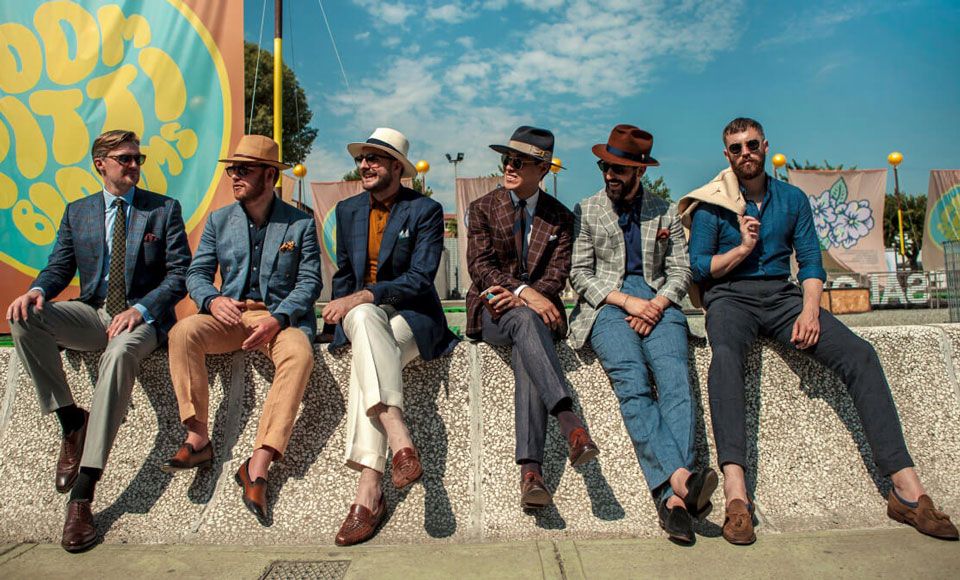 Wearing separates should encourage you to be bolder than you would be in the office. It’s more than fair to incorporate patterned separates when most of your wardrobe is plain navy or charcoal, but some small caveats apply.

Sure, no one wants to look like they leapt out of a department store catalogue. But going the other way (i.e., peacocking) is probably more ruinous for your closely-guarded reputation in the long term. Stick to one big pattern. For example, a windowpane check jacket over plain trousers.

Keep the rest of the story as simple as possible. Too much on the pattern front says suggests you’re a bit clueless or trying too hard. But if you are feeling a bit of reckless abandon, you can combine patterns by remixing different sized shapes.

Our guide on how to do prints will tell you everything you need to know. 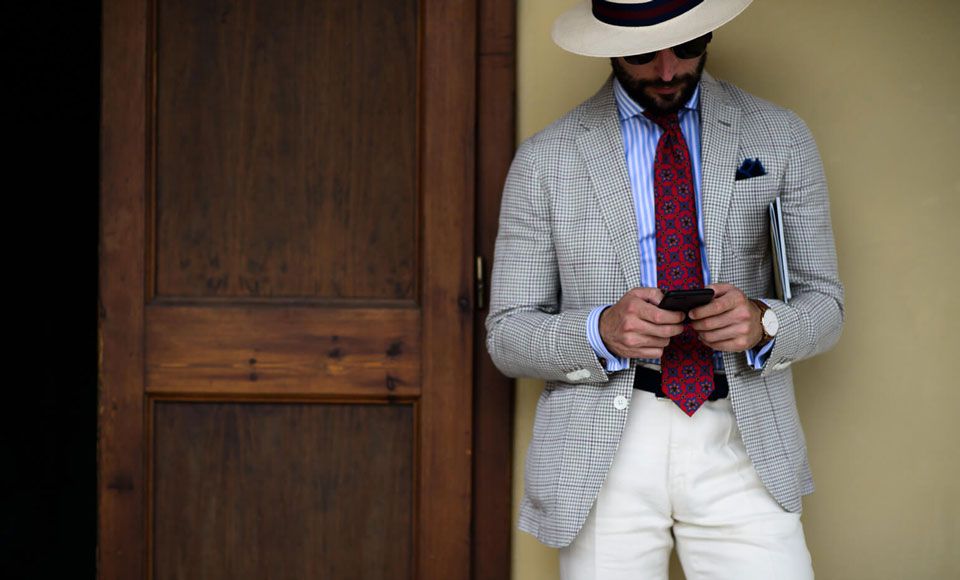 The classic two-piece suit is a reliable source of anxiety management for most guys – it does most of the colour arrangement work for them. Separates aren’t so simple.

First up, avoid colours that are too close, such as navy and a softer blue. Doing this creates the impression that you’re trying (and failing) to produce a close match up. But don’t go too far the other way. Too many colours can be visually overwhelming and create a sartorially confused impression that won’t

Stick to one colour as an anchor and build the rest around that. For example, a navy herringbone blazer with a white shirt and cream pants. Or, a brown tweed blazer and indigo jeans. This is a solid base for you to experiment with varying shades depending on your skin tone and the season.

Lastly, and your mileage may vary on this one, but we’d recommend avoiding black with separates. It’s a harsh colour in daylight, and tends to clash against most colours. Stick to dark blues and greys initially, paired with a neutral. 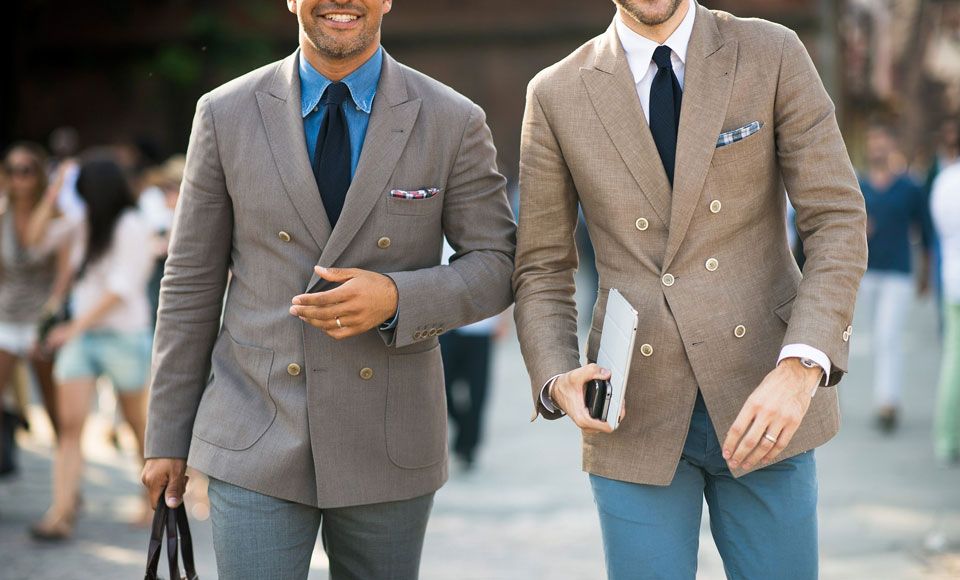 Make sure the rest of your outfit carries the effect

As remodelled country attire, sports jackets were historically made in coarser weaves both to distinguish them from their city brethren and to enable men to dress more informally.

This is still mostly true today. Generally, jackets with pronounced texture are less formal than plainly woven garments. This is something to consider if you’re worried about dress code stipulations on an event invite.

Additionally, you should think carefully about sports jackets that are finely woven or shiny. These have an annoying tendency to resemble stranded suit jackets that have lost their bottom half along the way. Even worse, you might look like a stingy bastard trying to make do with your corporate Monday-to-Friday kit.

If you do end up wearing separates in a fine fabric, make sure the rest of your outfit carries the effect. For example, a finely woven wool-silk-linen blazer with superfine merino wool trousers. 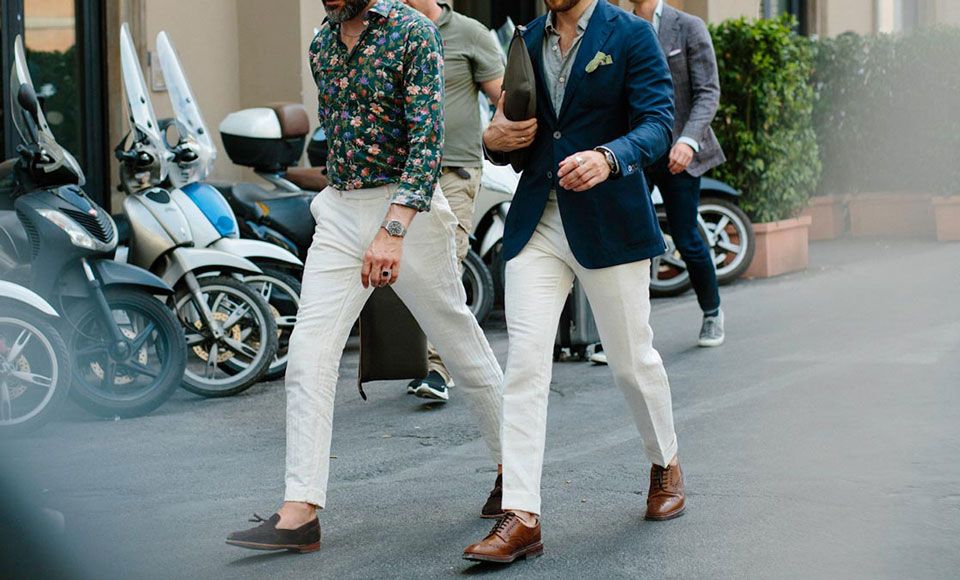 Here’s where you can have a bit more fun

Here’s where you can have a bit more fun. Due to the underlying informality of wearing separates, you can spruce up your kit with small details.

These will help produce a point of difference from your everyday working outfits (and give you an excuse to showcase those suspect stocking fillers that haven’t left the wardrobe yet). Whether that’s a floral pocket hankie, suede belt, or lapel pin, you have more flexibility to experiment compared to the office.

Just don’t over-accessorise like you’re an #menswear ‘influencer’ – pick one or two little additions and leave it at that. Don’t wear more bling than your better half.

Your choice of footwear with separates is much more generous – no such thing as ‘no brown in town’ with a casual blazer and pants. Loafers should be at the top of your list. Chocolate brown (tassels optional) works with most colours and levels of formality.

Chelsea boots aren’t far behind, especially for winter, and can be dressed up or down easily. If you’re feeling bold, luxe white sneakers can give you a crisp overall look (just don’t wear them to the club). 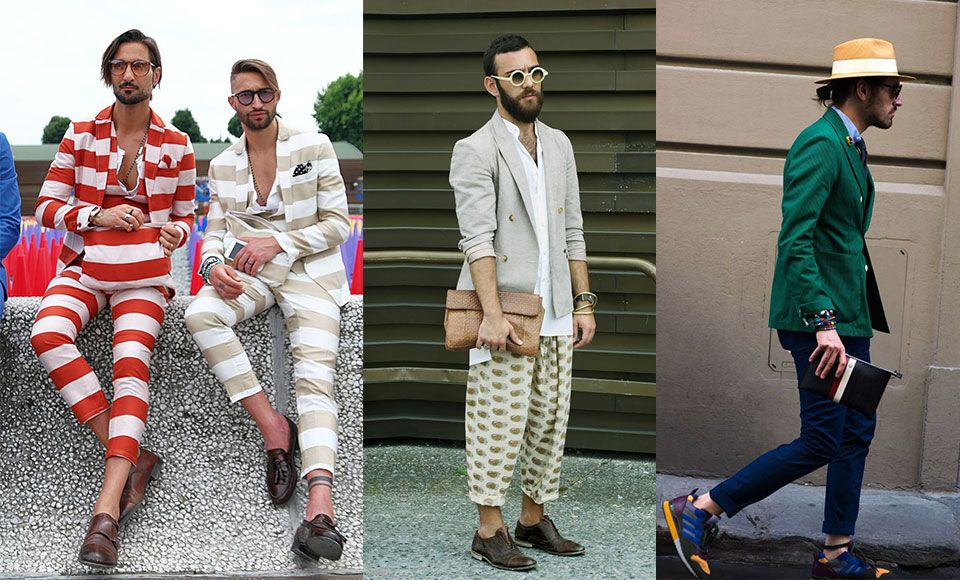 Your guiding light for suit break-ups

Do invest in staple colours first

You get more mileage out of navy and grey than salmon pink or aqua (and won’t look like a #menswear Instagram tosser).

Pick one, run with it, and avoid the temptation to dandify your way into the silent mockery of your peers.

Do play with texture

The whole point of separates is to explore options you don’t have access to with a lounge suit. But try to keep the textures in the same family. No s150 superfine merino jackets with thick herringbone pants.

Do think about having a seasonal rotation

Linen or cotton for summer and wool for winter. It’ll prolong the life of your garments and limit discomfort during climatic extremes.

It’s better to sit on the understated end, than look like you’re a castaway from Fashion Week.