There are a lot of freedoms Europeans have no one else does. But it’s not all drinking in public (without the need for a brown paper bag) and going topless on the beach. The liberties extend to up in the air too.

In Australia, pet dogs can only fly in the hold, generally, as cargo. This involves making a booking with the freight division of the airline, dropping them off at the cargo terminal, waving goodbye as they’re loaded along with cargo into the hold, and then you picking them up at the cargo terminal at the other end after the flight.

“Only service dogs can be carried into the passenger cabin of the aircraft,” Qantas states. Likewise, Virgin Australia’s website reads: “Working in collaboration with pet agents, we are able to accept cats and dogs to travel in the cargo hold of our aircraft.”

In contrast, various European airlines, including Swiss Air, permit pets in the cabin.

Professional snowboarder, Olympic bronze medalist, 3x World Champion, 6x XGames medalist and US Open Champion from Australia Scotty James on a recent flight from New York to Switzerland showed Those Down Under what they are missing out on, posting a bunch of pictures and clips of his furry pal and posting them to Instagram.

James was flying from New York to Switzerland. Further posts show he (and his furry friend) made it safe and sound.

Swiss Air pet rules read as follows: “Each passenger is permitted to take a maximum of two animals with him/her (in an approved transport container).” 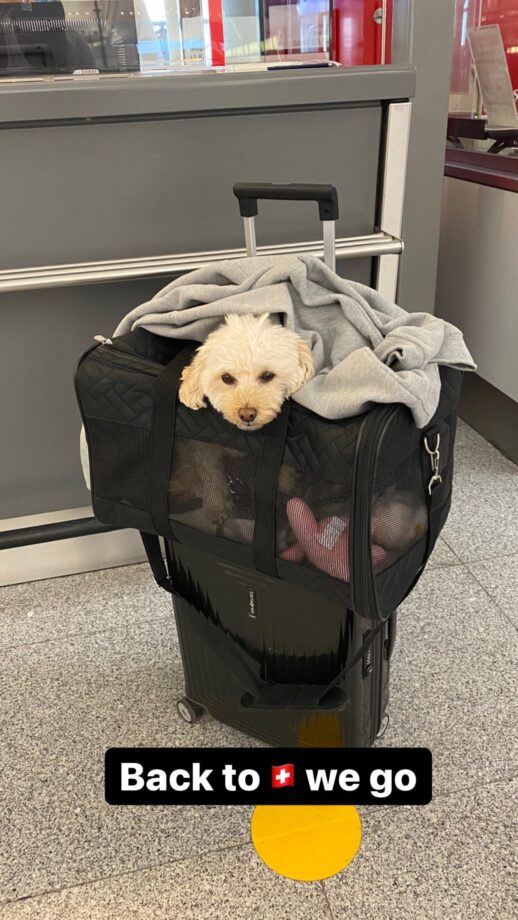 Transport can be in the cabin and/or in the hold, the rules page continues:

It’s also worth noting not every European airline has this policy. Ryanair, for instance, does not allow pets on board, unless they are assistance or guide dogs.

It’s also worth noting that Swiss Air’s policy is set to change. A new announcement on the carrier’s website reads: “Effective 1 January 2020, the transport of snub-nosed (brachycephalic) breeds of hares, rabbits, dogs, and cats in the cargo hold will be restricted. This does not apply to bookings already confirmed for travel after 1 January 2020.”