Forget non-social distancing runners and crumbling airlines; there are a bunch of never-to-be-repeated shots of Sydney’s beaches you need to see ASAP.

That’s thanks to photographer and founder of Salty Wings, Jampal Williamson, who has captured Sydney’s most iconic and popular eastern suburb beaches like you’ve never seen them before – completely empty.

With Australian residents staying at home (and with beachgoing, up until yesterday, being banned in all of the Eastern suburbs) a truly once in a lifetime moment has been captured in a collection of jaw-slackening photos.

As Jampal puts it, “I wanted to capture Sydney’s iconic beaches in their natural, untouched state. The result revealed a collection of eerily beautiful stills. A moment in time most of us will never forget. It was incredible to see these deserted beaches in an isolation all of their own when they would otherwise be absolutely packed to the rafters.”

Providing a uniquely Australian view into these unprecedented times, the collection contrasts stark ‘before and after’ self-isolation images.

The collection shows some of Australia’s most iconic beaches – which are capable of drawing crowds like flies on any given day – in their most natural and surreal state.

Captured in early April from a helicopter, the beaches captured in the shoot include Bondi Beach… 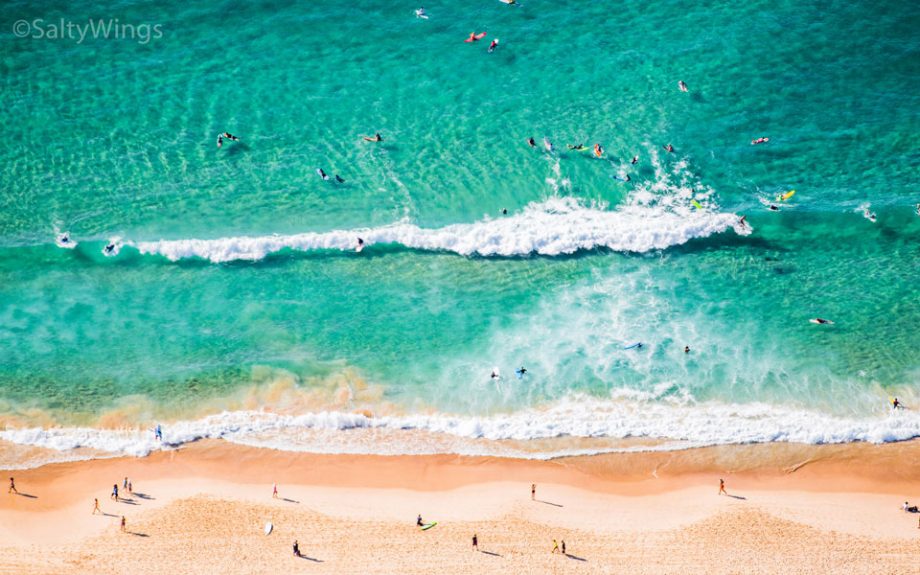 Clovelly Beach, Tamarama Beach, Coogee Beach, Gordons Bay, Manly Beach, Maroubra Beach and – of course – the ever resplendent Bondi Icebergs (which can be found at the south end of Bondi Beach, and which has been emptied of water).

Photographer Jampal hopes his shots capture a positive aspect of the current situation in Australia and showcase Sydney’s incredible natural beauty. Having spent the start of 2020 travelling across Australia to photograph the Eastern coastline, Jampal made the decision to self-isolate in New South Wales after his home state of Western Australia announced it was closing its state border.

Improvisation for the win.

In any case, a selection of the photos are now available to order as prints on the Salty Wings (a website/ company Jampal runs with biz pal and mate Michael Goetze) with more images from the shoot scheduled to be made available in the coming week.

Making a name for themselves in their first two years (the duo started Salty Wings in 2016), they sent their drones on a 20,000km journey along the coast of Western Australia, capturing its expansive, breathtaking, earthliness in high resolution. With an extensive knowledge of the Western Australian coastline, both Jampal and Michael are fascinated with remote and unique landscapes.

Salty Wings have since expanded their horizons by continuing their travels to all corners of Australia. They are on a mission to create a gallery that all Australians can be proud of – something we can all draw inspiration from right now.