Looking for the best rooftop bars in Sydney? Look no further. Sydney has a vibrant nightlife scene and being able to enjoy some drinks on a rooftop where you can look down on the people below or gawk at the skyscrapers around you, is an experience loved by many.

We’ve rounded up some of the very best rooftop bars in Sydney for you to enjoy either a nighttime tipple or even a daytime drinking session at the weekend with friends. All of them offer great views, great atmosphere and above all, a great selection of drinks.

Here is a selection of great rooftop bars in Sydney

In this Sydney rooftop bars story…

Step on out to the rooftop bar of Sydney’s most awarded pub come rain or shine – a retractable awning will protect you should the heavens open – and enjoy a vast selection of beers, wines and cocktails. And, don’t forget the full food menu comprising both small and big plates, making ELM Rooftop Bar in Sydney a perfect inner city sanctuary to enjoy a weekend lunch with friends.

It’s a little bit dirty and certainly a notorious place amongst long-time locals and tourists alike, but Dots Rooftop bar, perched on top of Hotel Sweeny’s is another Sydney CBD rooftop bar perfect for sampling the latest Australian beers. Located smack in the middle of the CBD with great views of the surrounding streets leading down to Darling Harbour, it’s certainly not all that flashy, but the music is good and few places are more vibrant across the weekend from top to bottom.

Take a trip to Newtown and take yourself up to the rooftop bar at Websters Bar. Revel in 1950s Australian nostalgia by way of memorabilia, rustic BBQ pits and turf flooring, all of which culminate to provide a perfect night in Newtown. With a huge selection of whisky to choose from, alongside an extensive wine list and beer taps, you could quite easily while away the hours. If you want a city experience without actually being directly in the city, Websters Bar is the best rooftop bar for you.

The one rooftop bar in Sydney that really sits within a high-rise, the people at The Rook are the first to take the more global idea of a proper rooftop bar and stick it high above the pavement of the Sydney CBD below. What sets the Rook apart as a bar lies within its exclusive collection of liquor, gourmet burgers and, wonderfully, freshly caught lobsters.

It’s crowded as hell most weekends, but the rooftop bar at the Glenmore has a view of The Rocks you’d otherwise have to trek it up to Observatory Hill to replicate. Nowhere else can you get such sweeping views of the harbour while holding an overpriced alcoholic beverage in your hand, and its seclusion from Sydney CBD means it’s a great post-work haunt during the week. We’re inclined to say The Glenmore is hands-down the best rooftop bar in Sydney.

The Brigade Rooftop at Light Brigade has brought a truly cosmopolitan feel to the Eastern Suburbs as if they didn’t have enough of that already. Nonetheless, few rooftop bars will ever manage to capture the terrace-style feel of the Light Brigade, sitting 83-metres above sea level and with a curved art-deco bar slinging out Gatsby-style cocktails and wood-fired pizza for the eager masses, this is a Sydney rooftop bar you have to check out when you just want to unwind.

The rooftop bar at the White Horse Hotel on Sydney’s Crown Street isn’t the largest ever. But it gets a mention because it’s such a welcoming space and one where you’ll enjoy some fantastic drinks whilst sitting above one of Sydney’s liveliest streets. With a small, but delectable food menu also on offer, the White Horse Hotel rooftop bar in Sydney is the perfect midweek jaunt for Sydney locals.

Zephyr is the latest to join Sydney’s growing list of rooftop bars and this one may well take the Martini as one of the city’s best. Perched atop the Hyatt Regency and walking away with multiple awards for Best Hotel Bar, Zephy is a stylish drinking space that takes full advantage of Sydney’s harbourside views of Darling Harbour. Fun, boujee and an open breeze combined with amazing drinks and a view of Sydney like no other make Zephyr the place to be at the moment. 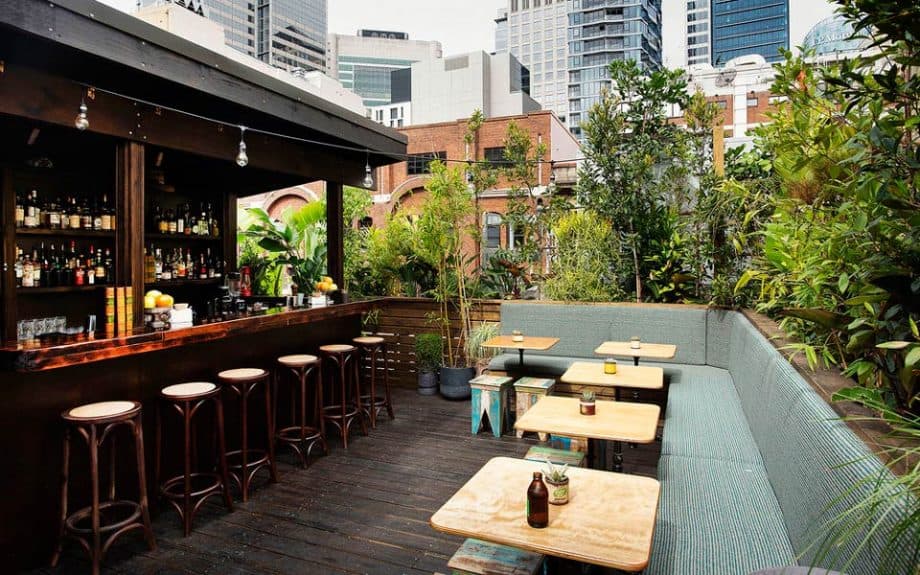 The brainchild of Dre Walters (previously of Kittyhawk and The Lobo), Old Mate’s Place is easy to pass by and around the time of opening, you would only know about it by word of mouth. It has since earned itself a reputation as being one of the best rooftop bars in Sydney, not only because the selection of cocktails on offer is second to none, but because the rooftop space plants you firmly in the centre of surrounding high rises, giving you a totally unique perspective of Sydney.

Finding a rooftop bar in Sydney that looks directly out over the beach and ocean can be surprisingly difficult, which is why the rooftop bar at Coogee Pavilion is an absolute must-visit. With no less than four bars on just the rooftop alone, situated both inside and outside, there is plenty to enjoy. Couple this with a great range of cuisines including Middle-Eastern mezze plates or chargrilled chicken and, not to mention, the incredible views, and you have yourself the quintessential Sydney rooftop bar.
Coogee Pavilion Rooftop