If there is one thing we can be sure of, as long as the earth is turning, we’re never going to be short of ways to buy, sell and trade assets. We’ve transitioned from physical assets such as money and gold to digital currencies and crypto-assets such as Bitcoin and ETFs. The latest digital asset now doing the rounds? NFTs.

Although having been ‘a thing’ since 2015, NFTs have only really taken off in 2021 and are already proving to be bought for millions of dollars. Whether they really are the ‘next big thing’, remains to be seen. For now, the only questions we can effectively answer are what are NFTs, what can they be used for, how can you get them and ultimately, why should you care?

Allow us to explain all.

What Is An NFT?

It stands for ‘non-fungible token’, but what does that actually mean? Well, if something is non-fungible, it means it is unique and cannot be copied. Say, for example, when you were at school, you traded your apple for someone else’s chocolate bar, you haven’t received the same thing back. On the contrary, if something is fungible, it means it can be traded for something of the same value, i.e. a $10 note being swapped for two $5 notes; they have the same value.

An NFT is, therefore, a unique digital file that is uploaded to an NFT auction market – there are several of these, but some well-known ones are KnownOrigin and OpenSea – where it can then be purchased using cryptocurrency. However, where things can get a little confusing is in the fact you can create infinite copies of said digital file – prints of an original piece of artwork, for example – but the NFT is an original copy.

As Geoff Quattromani, founder of the Technology Uncorked podcast, says,

Whoever uploaded the NFT digital file in the first place is able to retain copyright of that asset so that they can then choose to sell more NFTs in the future, but if you buy the NFT, you have an original copy, and this is what makes them so valuable. But there doesn’t just have to be one NFT file, there can be multiple, which we’ll come on to a little later.

It’s because of these uses that Geoff does indeed see NFTs as “having a future.”

“I think it has become a relevant step in the evolution of the internet, it allows ownership of digital assets to be recorded. Everything is a fad until is isn’t, although the current hype, however, is making it sound like a land grab of digital assets that have perceived value over and above what is real.”

What NFTs Are There?

While it is true that pretty much any digital file could be uploaded, bought and sold as an NFT, it is currently proving popular within the digital art world. Just like art collectors in the real world spend millions on original paintings, the same is true in the digital landscape. And we really do mean, millions. Digital artist Beeple sold an NFT at Christie’s for an unprecedented US $69 million. 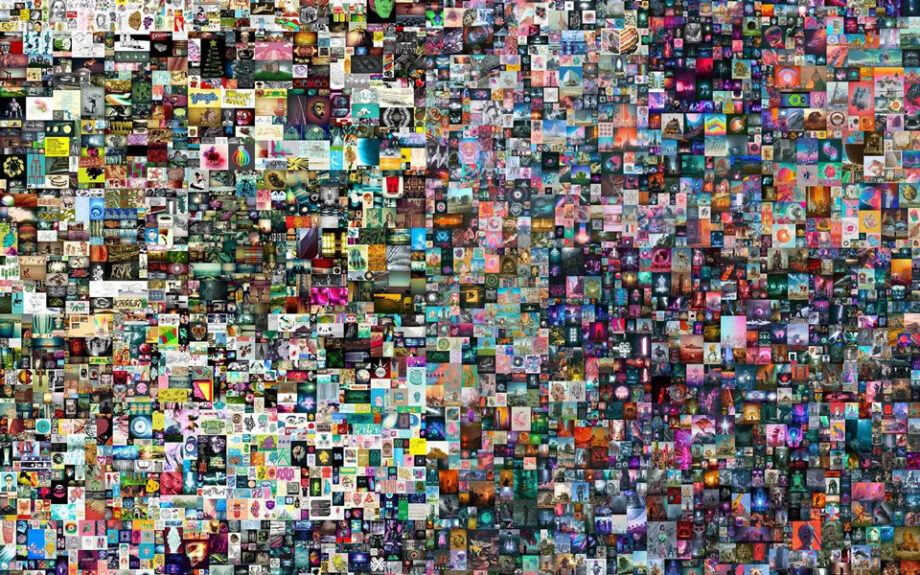 This NFT was a JPEG entitled Everydays: The First 5000 Days (pictured above) ,and was purchased by MetaKovan using just over 42,000 Ether (Ethereum crypto-assets). Despite the high figure, MetaKovan didn’t receive the copyright to the image, but did get some rights to display it.

Likewise, as we mentioned earlier, you can easily right click on that image above and save a copy of your own. But you won’t own the original, so basically, it’ll be worthless.

One contributing factor of the insane figure is that someone genuinely deems Beeple’s work to be collectible, just like someone else views Picasso’s as the ultimate in physical art, but also because it’s a major flex. The owner of the NFT will be able to one day sell it for (hopefully) a profit.

And, as we mentioned earlier, while Beeple’s artwork can be viewed online and you can even save a copy of the image on your computer or phone, you won’t own the original. Think of it like owning a soccer shirt autographed by the entire team.

Music can also be sold as NFTs. US rock band Kings of Leon made their most recent release When You See Yourself  available to buy as an NFT, although they didn’t put a limited number on it. Instead, you can buy it anytime during a two-week run that ends on March 19th. With your NFT you receive a digital copy of the album and a physical copy on vinyl, which will be printed with your unique NFT token number.

Canadian musician Grimes has also had some success with NFTs, selling around US $6 million worth of digital art via the Nifty Gateway platform. There were 10 NFTs available, some however were one-of-a-kind pieces, while others were available in their thousands, each selling for more affordable sums of money that accumulated to big bucks.

Geoff adds, “Artists in any medium will now be able to solidify their work online, it reduces copyright risks and helps creators receive recognition. Almost anything online could become an NFT but that doesn’t mean it should be.”

“When the dust settles and people like Jack Dorsey collect over 3 million dollars for a poorly worded tweet, we’ll start to see NFT mature and it become a normal part of the online marketplace.”

It’s not just artists and musicians that can benefit from NFTs either, as model Kara Del Toro – who has a “passion for modelling and digital content” – recently dropped her own NFT on the OpenSea platform, a 1 of 1 token that grants the owners access to a folder of 10 never-before-seen content.

She says her decision to go down the NFT route came “after taking a deep dive into the rabbit hole and crypto for the past few weeks.”

“It’s super addicting and fascinating to me, and I put so much energy, love and effort into my job as a model. Modelling, creative directing and digital content creation really is an art form to me, and I thought it would be cool to give the buyer the opportunity to own a piece for themselves.”

Speaking to what makes NFTs unique, Kara adds, “I think the coolest thing about an NFT is that the buyer doesn’t just get to view the token, they actually own it. It’s one of a kind and can never be duplicated, think of it like a unique signature.”

“That makes it super exclusive and much more valuable.”

“The image itself could be replicated, but the token cannot. It’s an investment they can sell later if they want to.”

As for whether Kara thinks NFTs really have a future, Kara echoes Geoffs comments, “It’s a bit of a mystery right now. It’s fun and I hope to be using NFTs in the future. It could easily be a bubble that could pop any time. Some may think it really is the future, maybe we will be NFTing everything from houses to textbooks, there are lots of possibilities.”

One thing we haven’t really be able to fully explain just yet, is how you actually buy an NFT. We know its based on Ethereum, but in what form does the content creator receive payment?

Kara tells DMARGE, “You’ll need Ethereum to mind an NFT and typically to purchase one as well. So yes, you’ll need crypto and a crypto wallet. You can then hold onto your Ether or you can convert it to USD or whatever currency you use.”

Are There Any Controversies Surrounding NFTs?

Yes. One, mainly. The blockchain NFTs run on is what is known as a proof-of-work. Bitcoin also works on the PoW and requires people to ‘mine’ for it, which uses lots of electricity. PoW is a little tricky to fully explain in layman’s terms, but essentially, it isn’t particularly energy efficient.

The NFT market has grown,
As eight-figure auctions have shown.
The overall price is
A worse climate crisis
For art you pretend that you own.

This means NFT trades have high carbon footprints, which means bad news for the environment.

There is also the very obvious point that NFTs aren’t going to be easy to understand by every Tom, Dick and Harry. While you don’t exactly need a Phd in quantum mechanics to understand them, they are a little harder to condense than simply cash money exchanges.

Geoff adds, “Like anything, the average Joe would need to want to understand NFT and its uses, and if they wanted to learn about it they will.”

“Marketplace are being set up already for NFT trades to occur and even traditional auction houses are getting on board” – such as the aforementioned Christie’s.

“Digital content is worth what someone is willing to pay.”

What Are NFTs FAQ

What is an NFT?

An NFT is a non-fungible token, meaning it is something unique that cannot be traded for something of equal value and it cannot be copied.

It is uploaded to an NFT auction market and usually bought and sold in cryptocurrency, such as Ethereum.

What are some examples of NFTs?

Artists and musicians are currently championing NFTs, with bands such as Kings of Leon and digital artists such Beeple selling their work in NFT format, sometimes for millions of dollars.