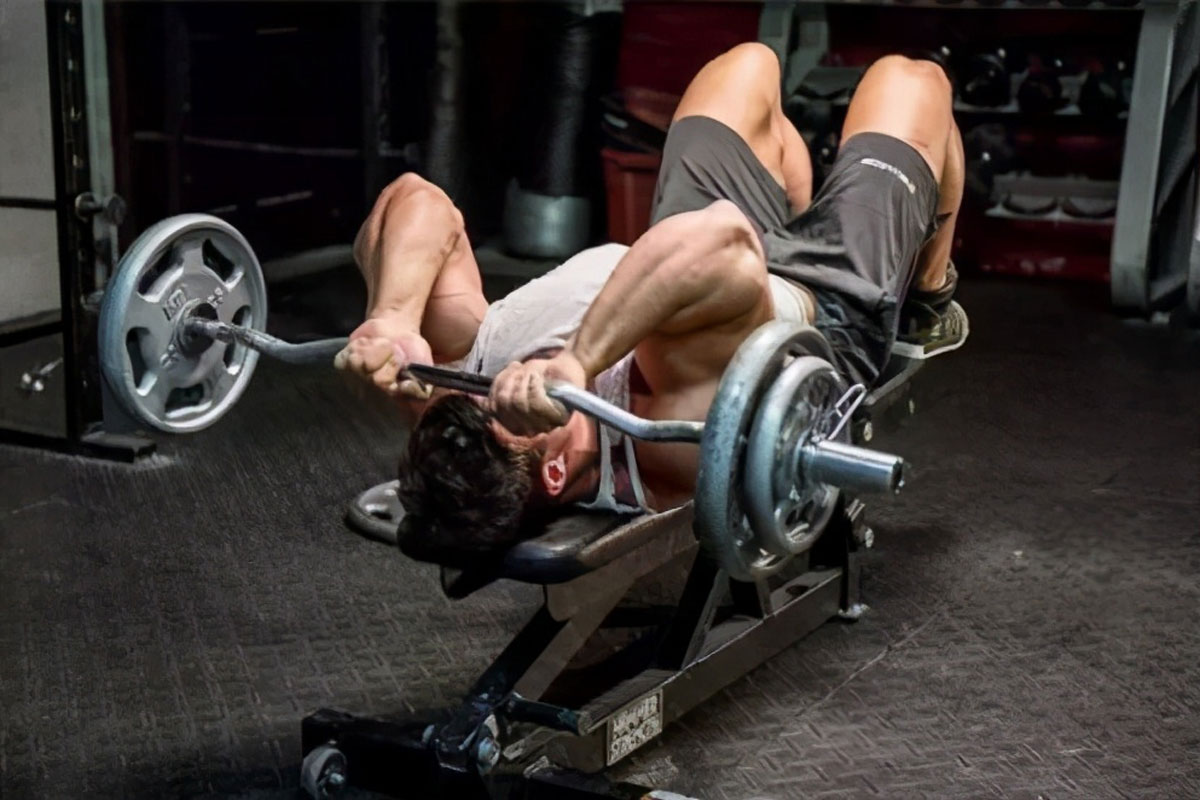 It’s always great to have big arms. Not only aesthetically pleasing, having big arms can also indicate one has some serious strength, and is able to lift heavier objects with ease. Naturally, to build up the size of your biceps, triceps and even shoulders, you need to complete a series of arm exercises to help target these muscle groups.

But, while it is possible to target these muscle groups with a series of arm workouts, you’ll benefit far more from adding in some other movements, such as compound exercises, to build up strength in the rest of your body, which can further help you with lifting heavier weights.

After all, your upper back and even core are required to be strong and stable to help you perform pull-ups or barbell bicep curls, for example, so adding in extra moves to your weekly routine is an absolute must.

Having said that, there are a huge number of arm exercises you can include in your workout routines that will have your arms busting out of your t-shirts in no time.

What Muscles Are In The Arms?

Understanding what muscles are in the arms shouldn’t prove much difficulty for many. You’ve got the biceps and triceps, which make up the main bulk of the upper arm. There is also the deltoid muscle, which is essentially your shoulder, along with the muscles in the forearm which aid with moving the wrist and hand.

However, as we mentioned earlier, other muscle groups are brought into play to assist with moving the arm, such as your chest muscles (the pecs). Your lats in your back also play a part, and the rotator cuff muscles which attach to the scapula in the upper arm, aid with moving the shoulder.

This is why it is important to not place the sole focus on just the biceps and triceps.

After all, it’s far more beneficial to complete all reps effectively, than to only perform a few of them before feeling fatigued. Leave the ego at the door and you’ll soon reap the reward.

Before you even think about picking up a barbell or a pair of dumbbells, it’s important you warm up first. The easiest and most effective way to warm up your arms for your arm workout is to perform similar moves to the ones in your routine, but just with much lighter weights.

These can include bicep curls, tricep kickbacks, and arm rotations, with your elbow kept close to your body, and rotating your forearm from facing forward around to your side in a 90 degree angle.

Resistance bands are also a great piece of equipment to use, and you can use these to perform standing band pull aparts, or rotating your arms from out in front of your, over your head and out behind you, to prime your rotator cuff muscles.

With your body warmed up, you can move onto performing some serious lifting.

Starting with everyone’s favourite and most obvious arm workout, the bicep curl. Bicep curls can be performed using a straight barbell, and ez bar or a pair of dumbbells, and within that, you can perform them standing, you can sit on a bench, or you can perform what is known as the concentration curl (which we’ll talk about a little later).

It’s important you perform bicep curls slowly in order to place the maximum amount of tension on the muscle, and that you complete a full range of motion without using any swing for momentum.

How to perform: Standing with your feet and hands shoulder width apart, take hold of either a barbell, an ez bar of a pair of dumbbells. An ez bar is the best piece of equipment to use to help prevent injury to your wrists.

With your arms straight down in front of your thighs, curl the barbell or dumbbells up, bending at the elbow, until your hands meet your shoulders. If performing a dumbbell curl, you can elect to curl your arms in an alternate fashion.

Performing triceps extensions lying down, also known as skull crushers, are one of the best arm exercises for building up the triceps muscles. By lying down, you isolate the muscles to do all of the work – although your core does get a bit of benefit too – allowing you to build up incredibly well defined triceps in no time.

How to perform: Lie down on a bench and take either a dumbbell in each hand, a plate weight or an ez bar. Dumbbells are probably the best piece of equipment for this arm exercise, because they cause each arm to individually move the weight involved.

Hold the dumbbells with a neutral grip – palms facing inwards – and start with your arms straight up above your head. Bend your elbows so that the dumbbells move behind your head until you feel a good stretch in your triceps.

Hold here for a second, before extending your arms back up to their starting position to complete one rep.

Another arm exercise to torch the triceps is the close grip push-up. It takes a conventional push-up, but sees you placing your hands close to your body, putting extra focus on the triceps muscles.

How to perform: Get yourself in a regular push-up position, but place your hands so they’re inside shoulder width. Lower your body down until your chest is nearly hitting the floor and push back up, forcing your hands into the ground.

You should feel a serious burn in your triceps. Push yourself up until you’re back in your starting position.

Sets: 3 sets with 8 to 10 reps per set
Tempo: You can go at your own pace, but the slower and more controlled, the better

As mentioned earlier, the concentration curl is one of the best arm exercises for giving you some serious bicep peaks. When you’re performing this move, it literally looks like you’re concentrating on it the whole time, hence the name.

How to perform: Sit on a bench and take a dumbbell in one hand, holding it with an underhand grip. Rest your elbow on the inside of the knee of the same side you’re holding your dumbbell.

Starting with your arm straight down, curl your arm upwards until your hand gets close to your shoulder. Hold here for a second and squeeze, before extending your arm back down to the starting position.

The bench press is one of those movements that works multiple muscle groups. Not only does it target the chest, but your arms also stand to benefit from the movement, making it a truly versatile exercise that you have to include in your workout routine.

To help further target your arm muscles in particular, you can perform a close grip bench press, which sees your moving your hands to inside shoulder width, and performing in the same way.

How to perform: Lie down on a bench with a bench press rack. Grab the bar using an overhand grip and with your hands slightly wider than shoulder width (unless performing a close grip version of the move).

Lock your shoulder blades down, bring your feet close to the bench for stabilisation. Raise the bar off the rack and slowly lower it down towards your chest, until it is a few centimetres away from your sternum.

Pushing yourself down into the bench and your feet into the floor, slowly return the bar back up to the starting position. When viewed from the side, you want to see the barbell moving up and down in a smooth vertical motion.

The overhead press predominately works the shoulders, but since a set of big biceps will look out of proportion to a small set of shoulders, it’s a move you need to include in your workout routine to get you really popping out of your t-shirts.

The overhead press can be performed using a barbell, or you can perform a dumbbell overhead press, which can place extra emphasis on the shoulder muscles since you’re using individual weights

How to perform: Stand with your feet shoulder width apart and your knees slightly bent. Holding a dumbbell in each hand (or a barbell with an overhand grip) start with holding them above your shoulders.

Keeping your elbows facing forward, extend your arms and push the dumbbells up above you until your arms are straight. Return to the starting position above your shoulders to complete one rep.

As you get further into the reps, you may find them slightly more difficult to perform. If this happens, either drop the weight, or use the bend in your knees to give you a small push of energy to help you get the dumbbells up above you.

To get even more definition in your triceps, the triceps kickback is one of the essential arm exercises you need to add to your routine.

Start with dumbbells below your stomach, slightly above your knees. Making sure you keep your upper arms close to your body, straighten your arms until they are parallel with your body. When you reach the end of the movement, with your arms straight, hold for a second to apply extra pressure to the triceps.

Slowly return to the starting position to complete one rep.

When it comes to arm workouts, your biceps and triceps steal most of the limelight, but what about your forearms? That’s where the reverse curl comes in. Not only does this monster of an arm exercise work your biceps still, but it places extra focus on your forearms, and even your grip strength. This not only provide plenty of benefits in the real world, but it enables you to eventually lift heavier weights, because your grip is able to sustain heavier loads.

How to perform: You can perform a reverse curl using either a straight barbell or an EZ bar. As with other curling movements, the EZ bar takes away some of the strain placed on your wrists, but it will likely come down to personal preference. What is unlike other curling movements, however, is that you’re not going to be able to reverse curl the same weight that you biceps curl, so forget about even trying, at least not until your strength improves.

Load up your bar with a light weight (you can even start using just the weight of the bar to begin with) and hold it at shoulder-width with an overhand grip. Start with your arms down in front of you and the bar close to your thighs, then curl the bar up as you would a regular curling movement, i.e. until your hands meet you shoulders. Slowly lower the bar back down to the starting position to complete one rep.