When it comes to fashion and style, we here at DMARGE are always keen to point you in the direction of high-quality menswear such as a pair of white leather sneakers, a well-fitting suit, and a denim jacket for all occasions. But being based in Australia, we’re all too aware of the surf community, and with the gnarly waves, wipeouts, and long blonde hair, comes a specific way of dressing.

There are plenty of places you can go to pick up some surf-inspired threads, but we’ve picked out the best online shops to get you started. Some are the official sites of some of the biggest surf companies in the world, while others are a one-stop shop for everything you need, from tees to jackets to accessories.

What do surfers wear on their feet?

Water shoes and sandals are great choices, but they must be slip-resistant. Choose a pair with flexible and lightweight outsoles with a good grip. They must also be form-fitting, so your feet will not slide around.

Can you wear sunglasses while surfing?

Absolutely, but choose a pair with a tight-fitting strap and the ability to float. Polarized lenses are also a good option since they help cut down glare and allow you to spot corals and rocks below the water surface.

Is it easier to surf on a long or short board?

If you are a beginner, go for a long board. They are easier to paddle and better suited for dropping into big waves and swells. Short boards have less foam so they are harder to balance and stand on. 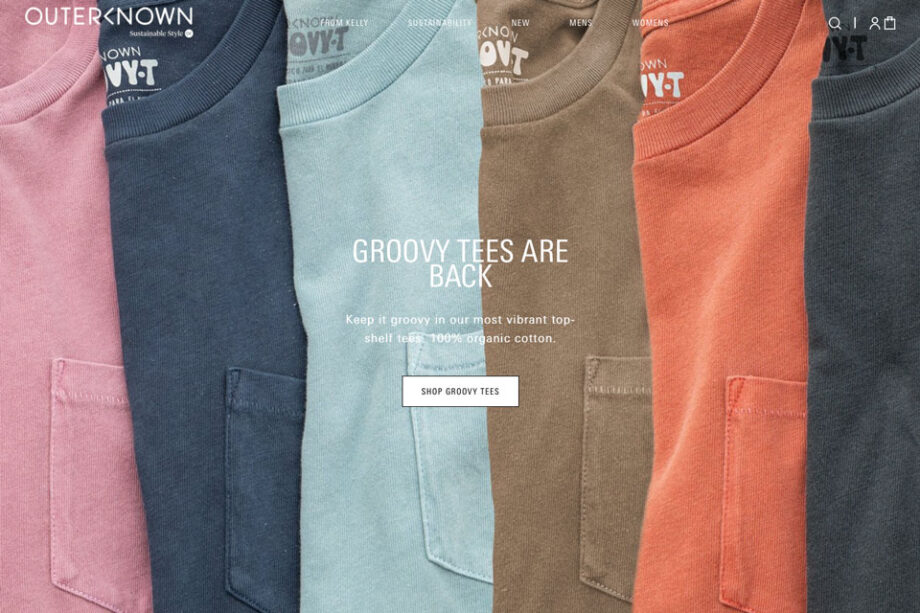 One of our absolute favourite surf brands for some time is Outerknown. The brainchild of world champion surfer Kelly Slater, Outerknown has become a global force not just in surf wear, but in the entire clothing industry.
With an undeterred commitment to sustainability and cleaning up the world’s oceans, the majority of Outerknown’s clothing is made from recycled or responsibly sourced materials. Fortunately, they look great too, with styles being consistently on-trend and made to an incredibly high quality. We thoroughly implore you to check them out.
Shop Now 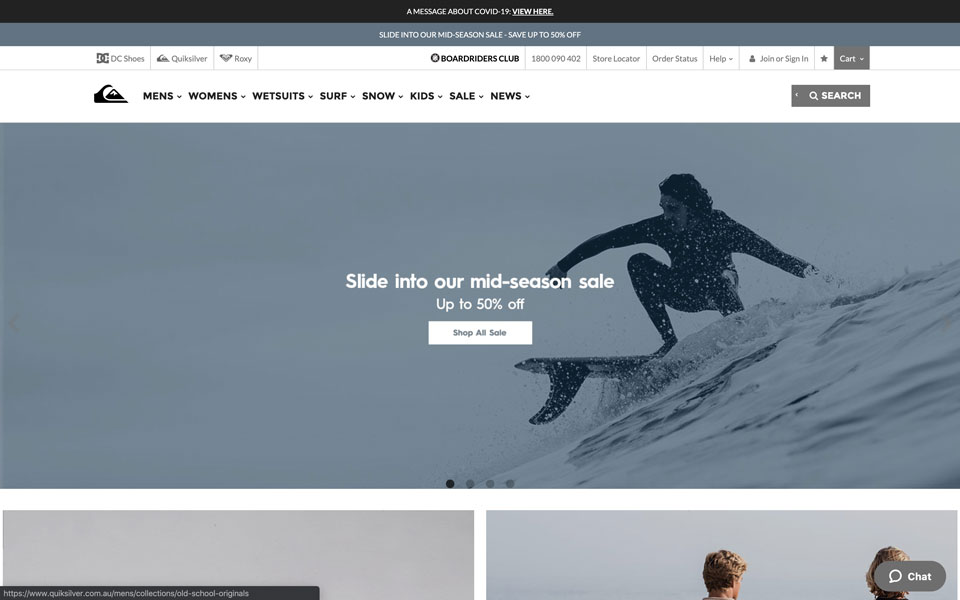 We can’t imagine many people haven’t heard of Quiksilver. The company started life in Torquay, Australia but has since upped sticks and jetted across the pond to Huntington Beach, California.
Quiksilver’s clothing range includes everything you could ever need to not only get the surfer look, but to make sure you’re well looked after out on the water. And if you happen to be into snow sports, well Quiksilver has you covered on all bases there, too.
Shop Now 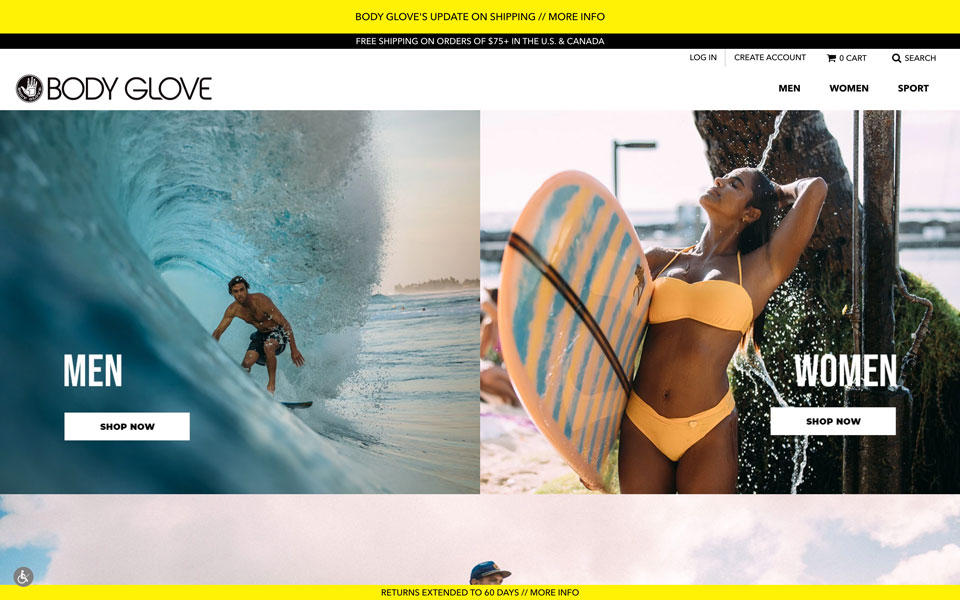 Body Glove was founded in 1953 by twin brothers, Bill and Bob Meistrell, who are often credited with inventing the very first practical wetsuit. To this day, third-generation Meistrell family members still work for the company, and beyond making wetsuits, Body Glove also produces a range of clothing, shoes, and various other accessories perfect for a surfing aesthetic.
Shop Now 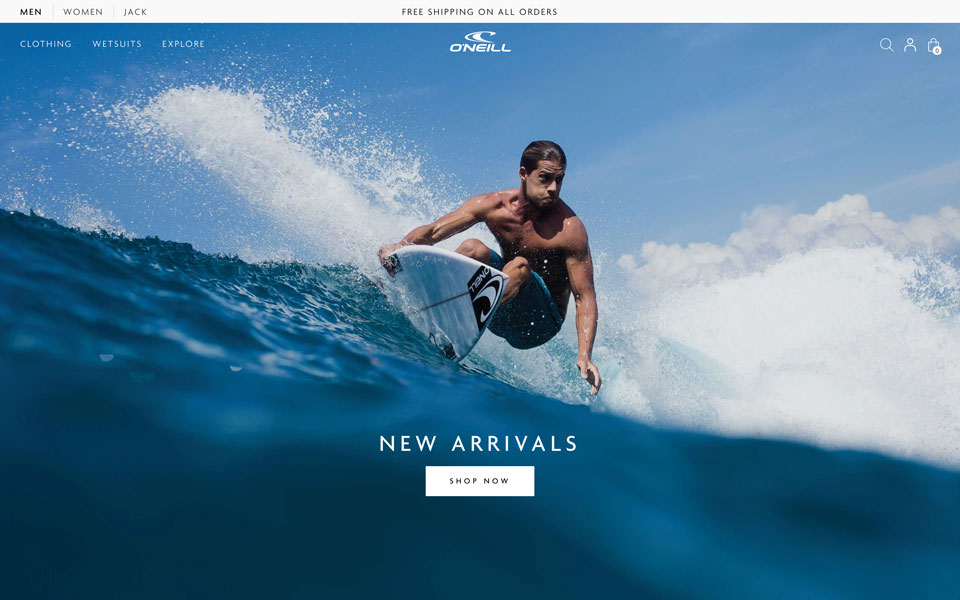 O’Neill was founded in 1952 by Jack O’Neill in San Francisco, California, however, it moved down the coast to Santa Cruz where it remains to this day; other HQs can be found in Luxembourg and The Netherlands after it was bought by Logo International B.V.
Jack O'Neill – like Body Glove's founders – is also credited with creating the first wetsuit, and his son Pat is regarded as inventing the leash that attaches to surfboards. Today, the company sells a vast range of clothing styles, with a heavy focus on boardshorts and wetsuits.
Shop Now 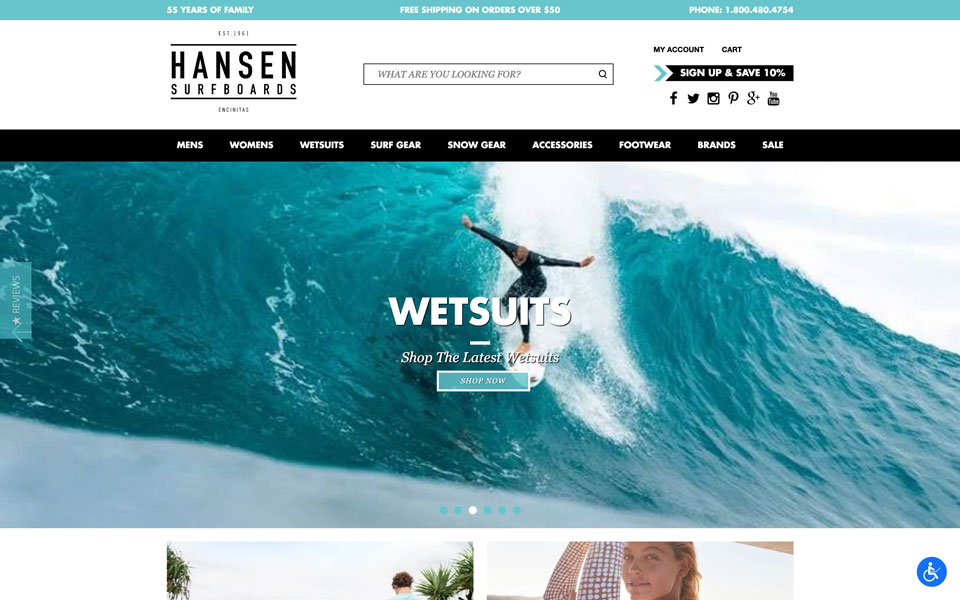 Hansen Surf was started by Don Hansen in 1961. After attending University in South Dakota where he tried surfing for the first time, he relocated to California and learned how to shape surfboards with Jack O’Neill – the founder of the O’Neill surf brand.
Hansen surfboards are hard to come by today, but the company instead now sells a range of clothing from some of the most recognised brands, as well as surfboards from other well-respected companies.
Shop Now 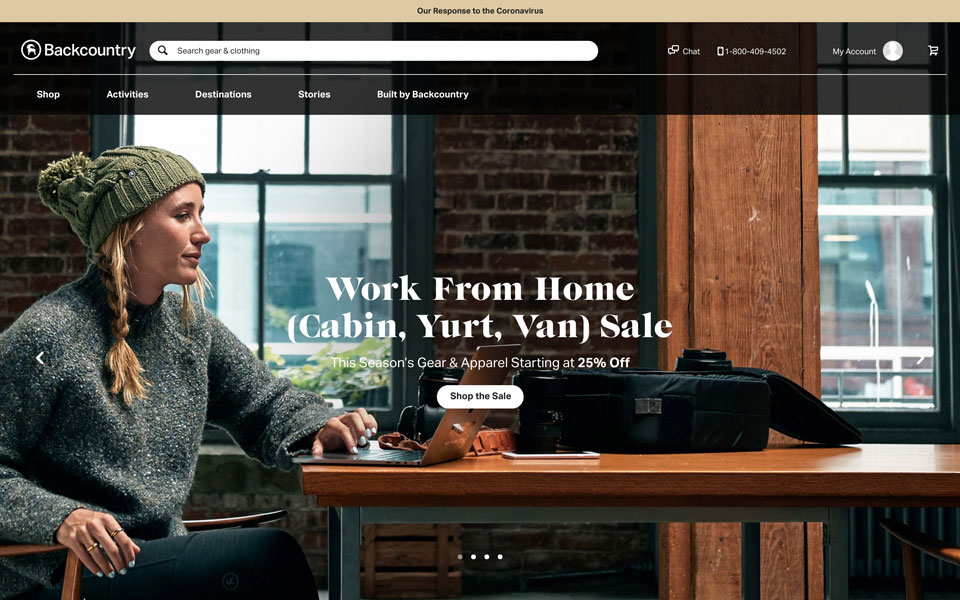 Back Country isn’t a surf-specific shop, but instead caters for everyone who wants to get into the great outdoors. Headquartered in the US state of Utah, Back Country stocks some of the biggest names, including Billabong, Patagonia, and Quiksilver, but doesn’t stop at just offering clothing. The company also has a wide range of surfboards and accessories to get you fully kitted out for the waves.
Shop Now 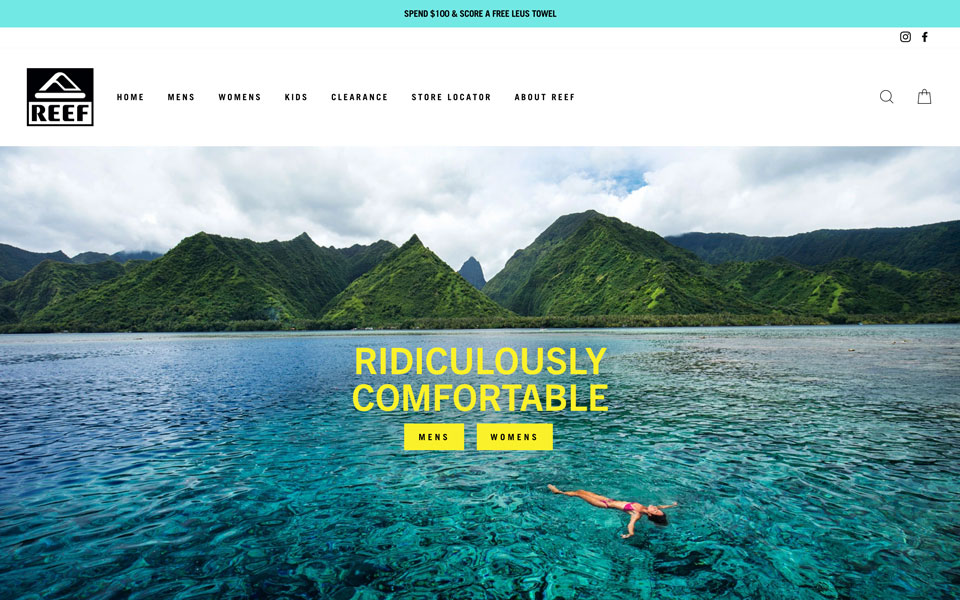 It’s not just about clothes when it comes to surfing fashion, as no surfer's look would be complete without a pair of thongs (or sandals/flip-flops to our non-Australian readers). Reef is one of the biggest names in the game, thanks to its supremely comfortable footwear, which includes a collaboration collection with 3-time ASP World Tour winner, Mick Fanning. What’s more, select pairs even feature a bottle opener in the sole, so you can easily have a couple of cold ones after a surf!
Shop Now 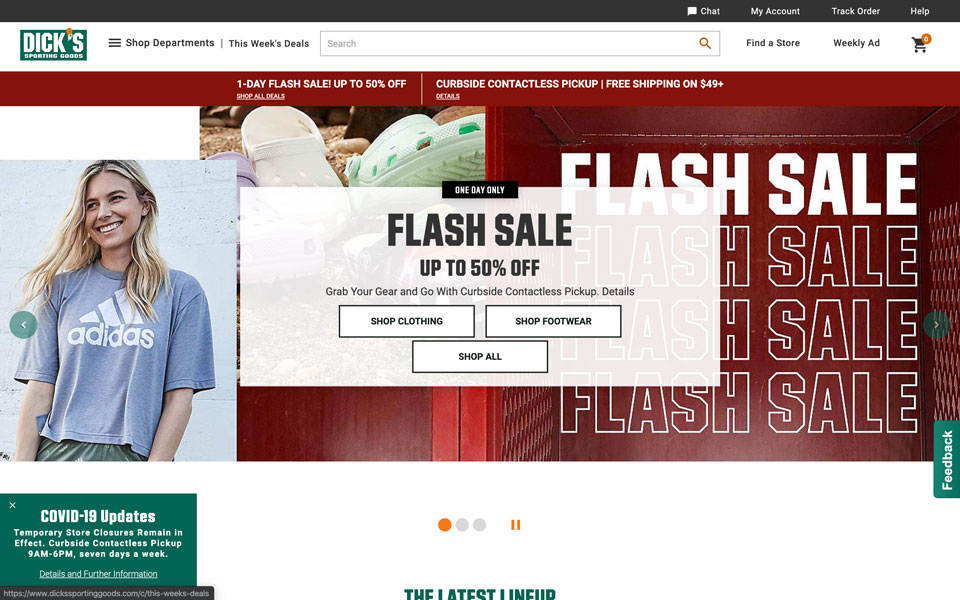 This American retail chain caters for virtually every sport imaginable, including surfing. The company’s product catalogue might not be as vast as some of the other retailers on this list, but the products it does sell are carefully selected and sold for competitive prices.
Shop Now 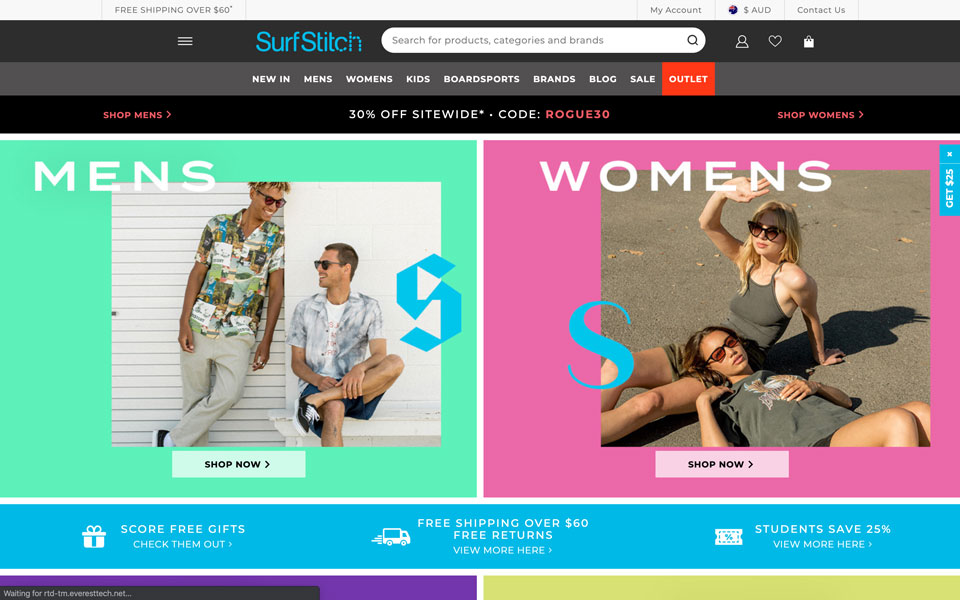 Surf Stitch is one of Australia’s largest online retail stores for all things coastal. With over 300 brands in stock, covering both big names and those you may not have heard of before, you’re sure to find what you’re looking for. The site hosts regular sales too, so the already competitive prices become even more affordable.
Shop Now 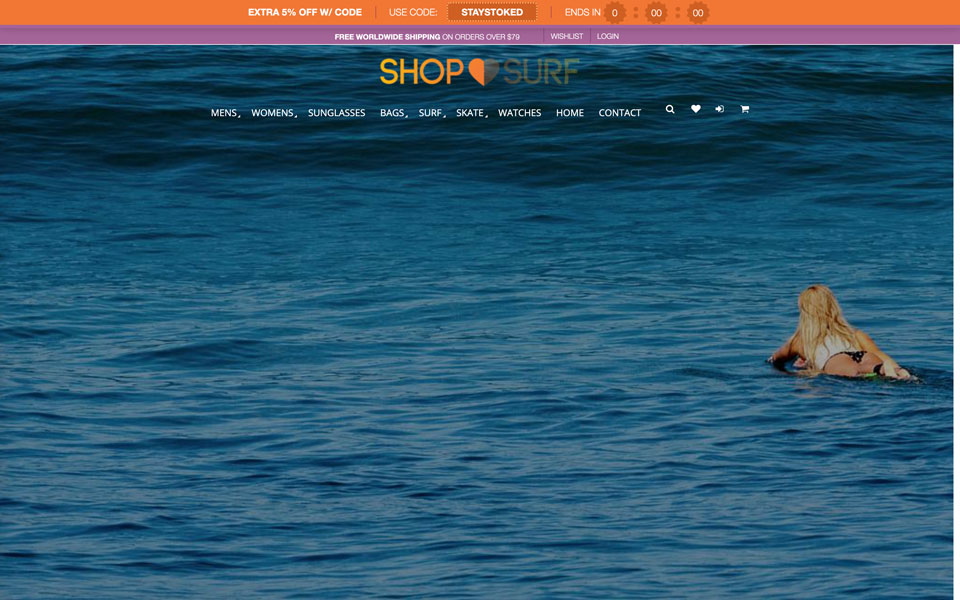 Shop.Surf is a one-stop destination for a wide variety of surf clothing and hardware. Like Dick’s Sporting Goods, the amount of gear on offer doesn’t quite match the offering of somewhere like Surf Stitch, but with items from the current season, not to mention an extensive collection of fins, leashes, and wetsuits on offer, mean it’s well worth a look. Plus, the site offers free worldwide shipping when you spend over US$79.
Shop Now 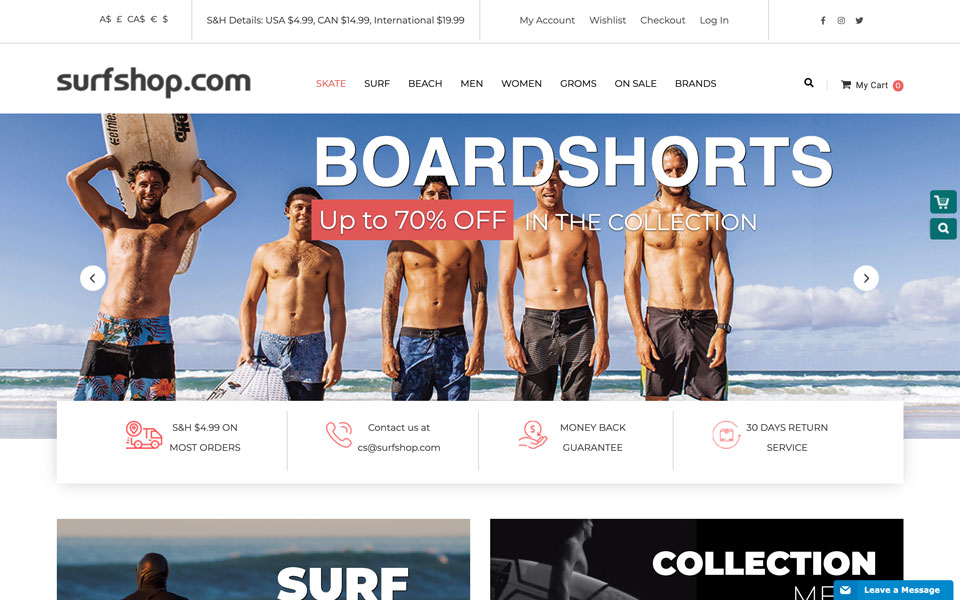 Surfshop not only sells clothing and accessories from a range of brands, but it also gives you the chance to customise your own rash vests and bodyboards, ideal if you run a watersports business. You can also find GoPro accessories, backpacks, and surfboard repair kits on the site, and all of it can be sent internationally for a low cost.
Shop Now 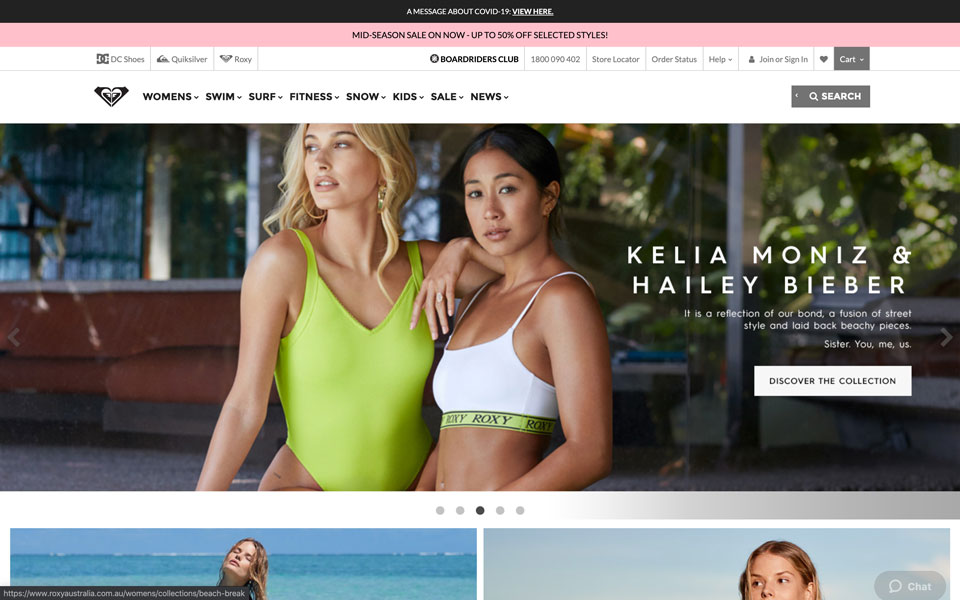 Roxy is the sister brand of Quiksilver, catering more specifically for females. So if you have a special someone in your life who also happens to be into catching sick waves, then there’s no better place to get her some fresh threads or the odd present.
Shop Now 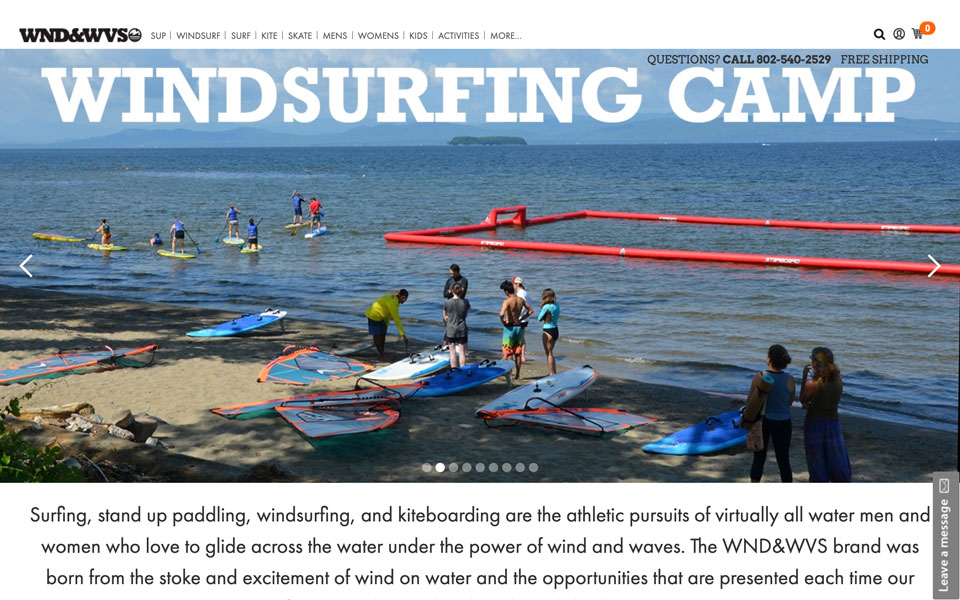 If you’re into stand-up paddleboarding or windsurfing, Wind & Waves is the shop for you. The retailer can cater to your every whim, from boards to sails to wetsuits. Regular surfers are looked after too, along with skateboarders and kiteboarders. Add to that a full range of regular clothing and accessories and it could soon become your favourite surfwear retailer.
Shop Now 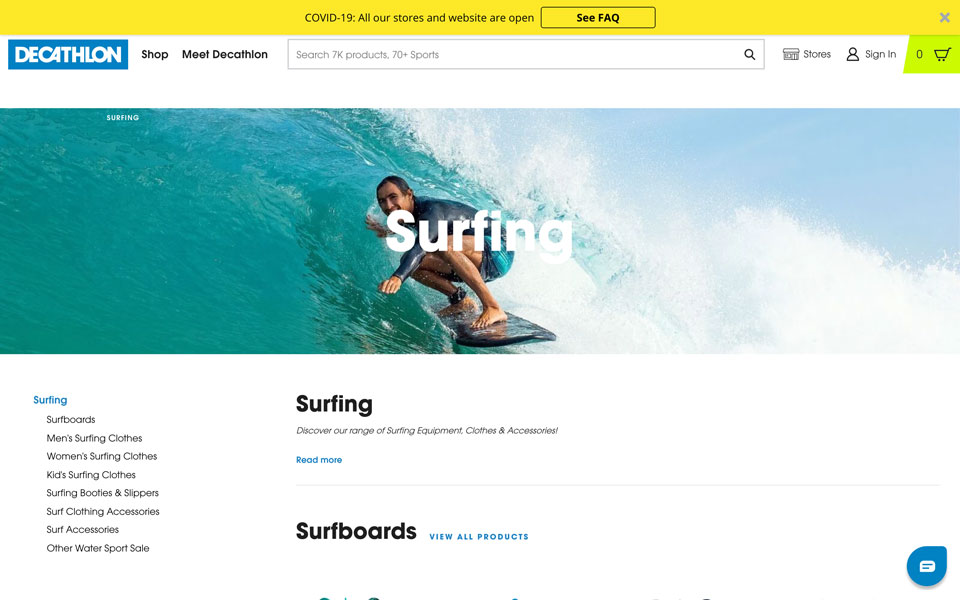 You might think Decathlon is for more everyday sports such as running or the gym, but the French retailer actually stocks gear for surfers too (among many other sports). Yes, the range may be suited more towards the amateur and beginner surfers, or those on a budget, but everyone has to start somewhere, right?
Shop Now 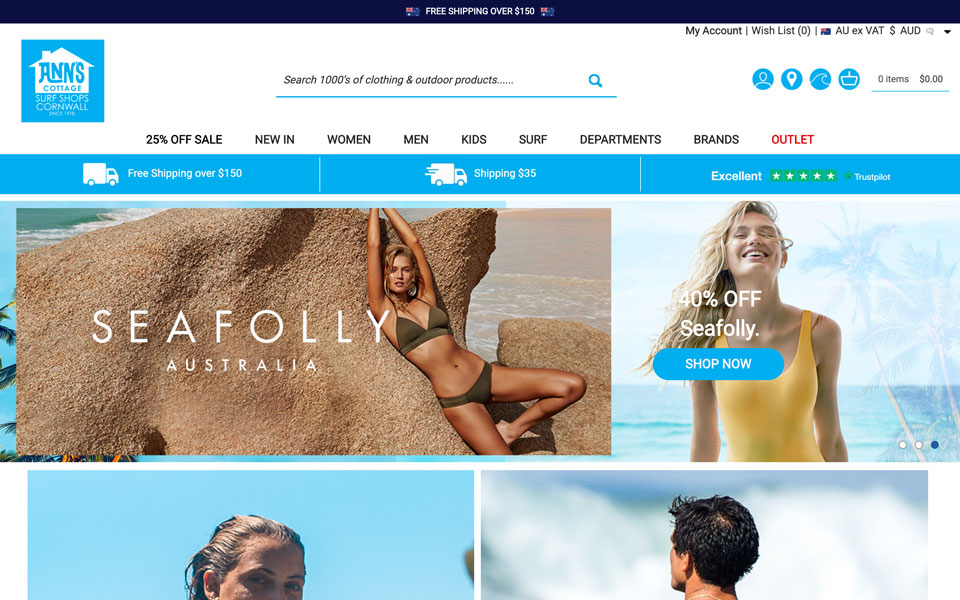 Ann’s Cottage is one of the leading surfwear retailers in the UK. The company started life in Polzeath, Cornwall in 1978 and has since opened 13 more stores in the South West of England, including a new surf centre – also in Polzeath – that’s home to the largest collection of wetsuits in Europe. The website only launched in 2007, but through it, you can expect to find surfwear from all the big names, along with hardware for all manner of watersports.
Shop Now