Our round-ups of the world’s most drivable roads wouldn’t be complete without an edition dedicated to Japan. The island nation is home to one of the most fascinating carscapes on the planet, as well as some of its most zealous auto enthusiasts.

As the land that gave us drifting, Japan has no shortage of rousing routes to explore, just resist the urge to drive like ‘Drift King’ Keiichi Tsuchiya unless you’re actually Keiichi Tsuchiya. Or that ‘DK’ guy from Tokyo Drift. We give you, the best driving roads in Japan. 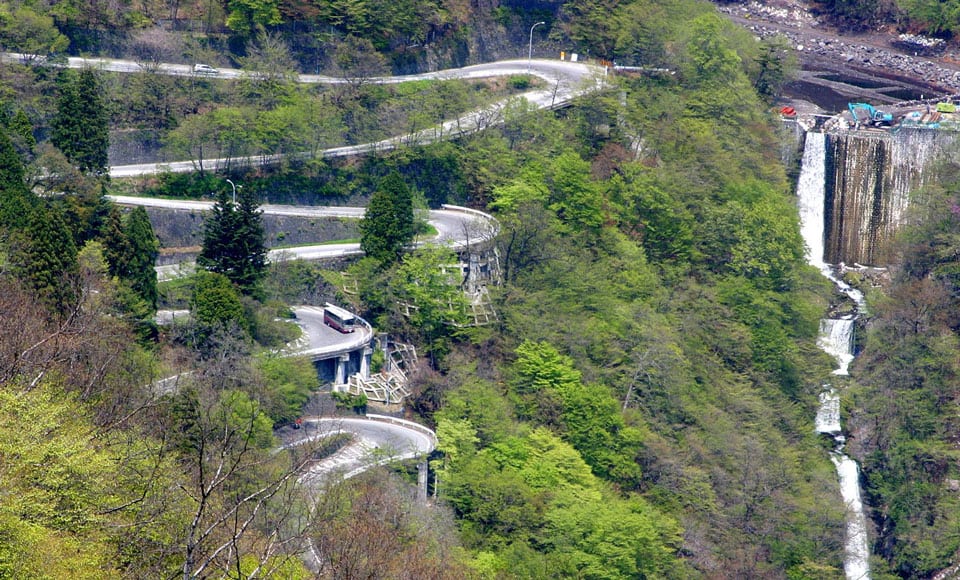 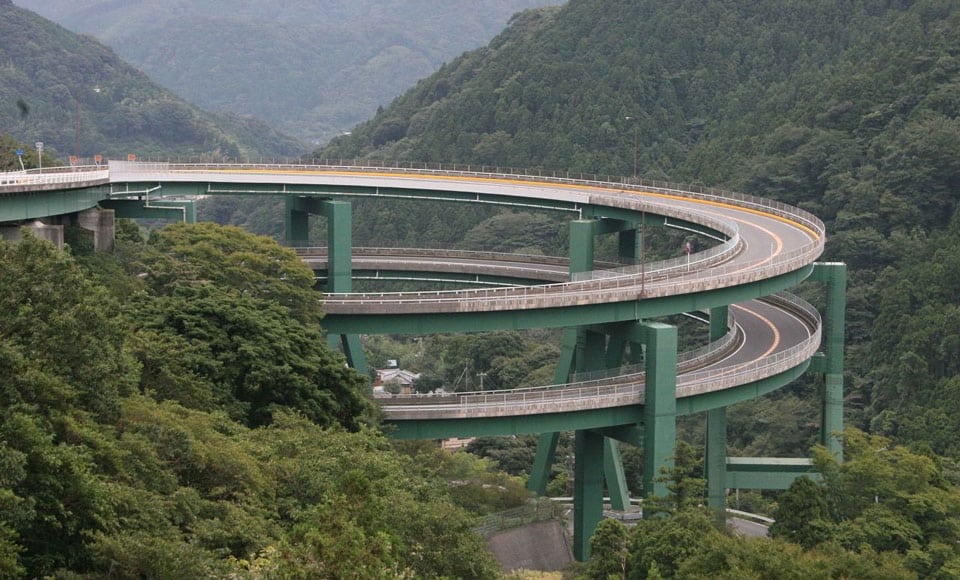 The Kawazu-Nanadaru Loop Bridge is an exemplary illustration of Japanese ingenuity. The steep grade of the mountainside made a linear ramp impossible, so instead a spiraling road that looks more roller coaster than motorway was constructed. The twin coils are 1.1 km long, 80 m in diameter, and carry cars up and down a full 45 m. As tempting as it may be to floor it, the unique structure demands careful driving and the speed limit is only 30 km/h. We suppose 30km/h sideways shall have to suffice. 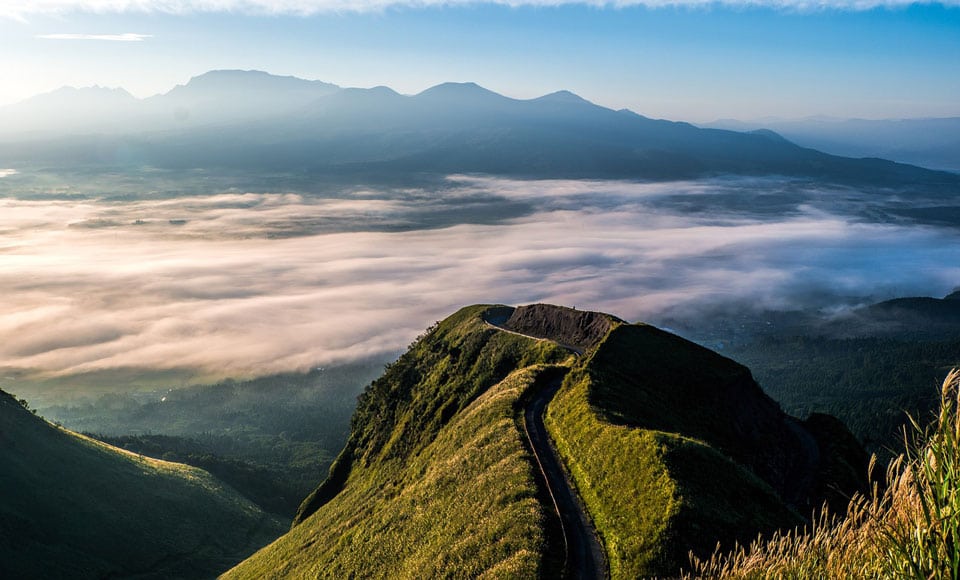 In the centre of Kyushu, Japan’s third largest island, is the country’s most active volcano. The picturesque location makes it one of the best driving roads in Japan, it lends itself to leisurely driving with stops for soaks in the natural hot springs that abound in the area. Pay a visit to the spectacular Nakadake Crater – provided the risk of volcanic activity is low and your respiratory system can handle the intense volcanic gases – followed by some retail therapy at the Tosu Premium Outlets. 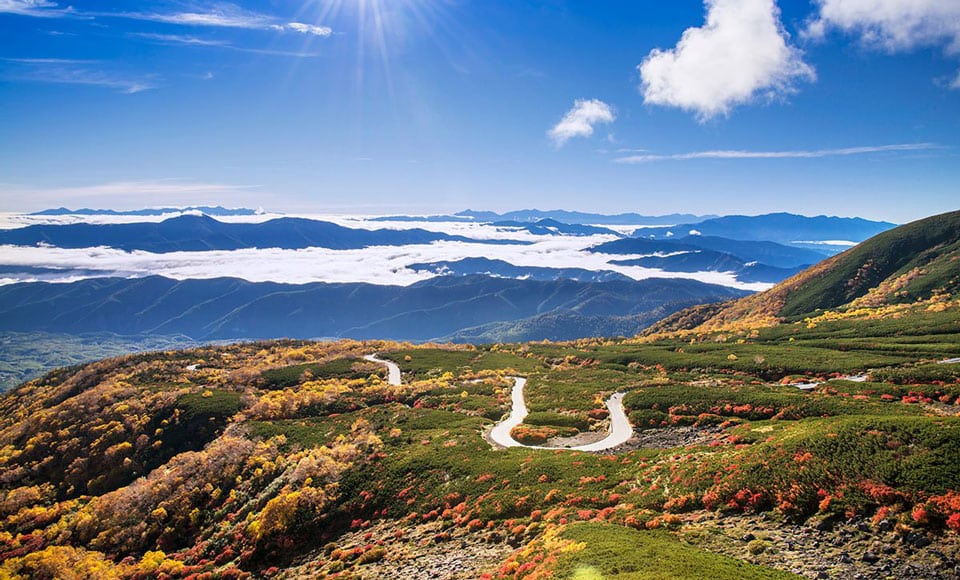 Take a cruise amongst the clouds on Japan’s highest road. Mount Norikura climbs to 3,026 m above sea level, offering unparalled panoramic views of the Northern Alps Mountain Range. The Norikuya Skyline Road is often closed due to heavy snowfall, but when open drivers are free to meander up to 2,700 m. Past that point, the road is no longer public and a taxi or bus must be taken to continue. The highest peak, Kengamine, can only be reached on foot. 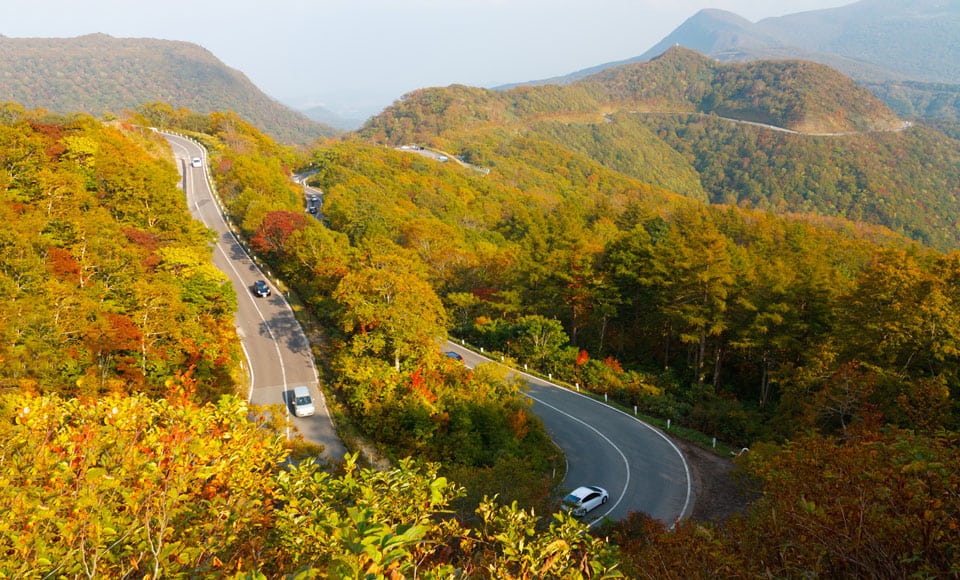 The Azuma-Kofuji peak, located in the Mount Azuma volcanic mountain range, is a perfect miniature replica of Mount Fuji. Arriving at the base means travelling the Bandai Azuma Skyline, one of Japan’s most impressive mountain roads. Outstanding views are in ready supply, particularly when the autumn colours are in full bloom. Take note: the road is far in-land from the Fukushima nuclear powerplant and safe to drive. 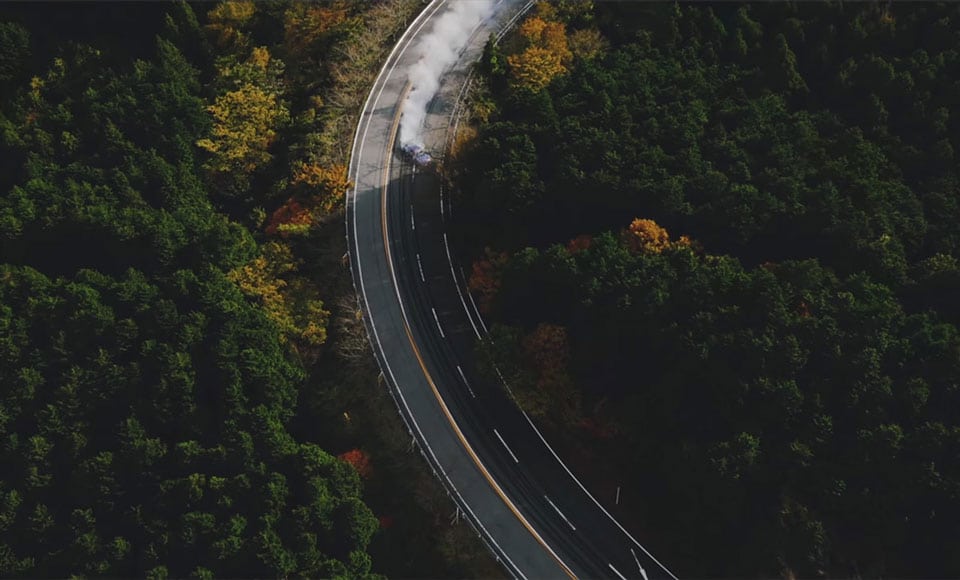 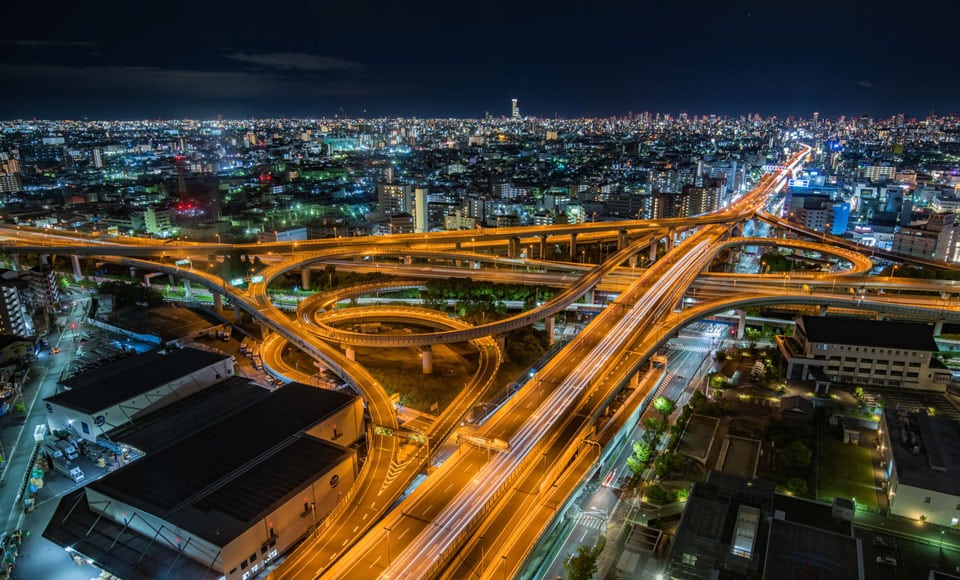 “Kanjo” requires us to answer two questions: “what?” and “who?” First the what: the Kanjo Loop is an elevated highway system in the heart of Osaka. For most of the city’s citizens, it’s just a regular roadway. For the who in question, an underground band of outlaws known as “Kanjo Racers” or “Kanjozoku,” the loop is an opportunity to throw caution (and laws) to the wind. The Kanjo street racing scene is an insane, highly illegal, and utterly captivating automotive mystery. 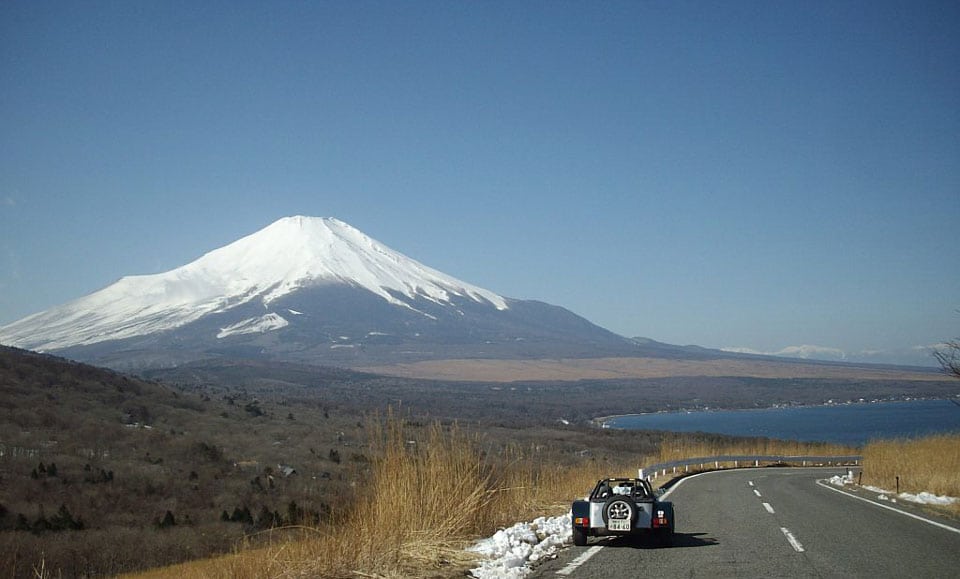 Mt. Fuji is one of Japan’s most recognisable symbols and the country’s highest mountain. Its extraordinarily symmetrical cone is a must-see if you’re in the vicinity of Tokyo and in the mood for sightseeing. Take a serene and spirited drive along Mikuni Pass, which provides breathtaking views of the mountain and Lake Yamanaka below. The viewing spots can be crowded, but keep driving and eventually you’ll find a calm patch to take in the scenery. 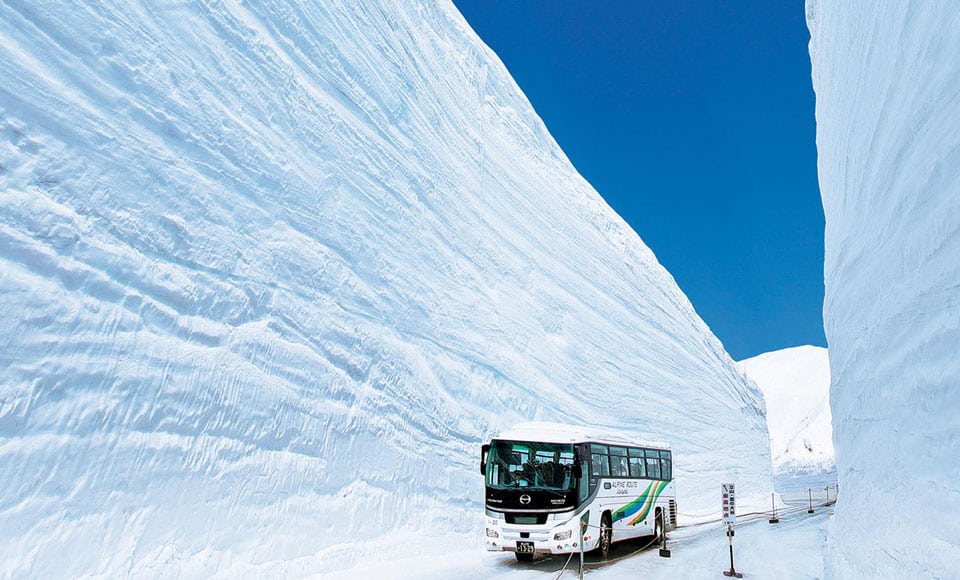 Drive along Tateyama Snow Canyon Road and Game of Thrones fans will be forgiven for thinking they’re beyond the Wall in Westeros. There are no White Walkers here, just gravity-defying snow walls that reach up to 20 m high. The route is only 37 km in length, but the fantasy landscape is so unique that the trip is well worth it. Currently the road is only used for sightseeing, so expect a flood of tourists exercising their arms with selfie sticks. 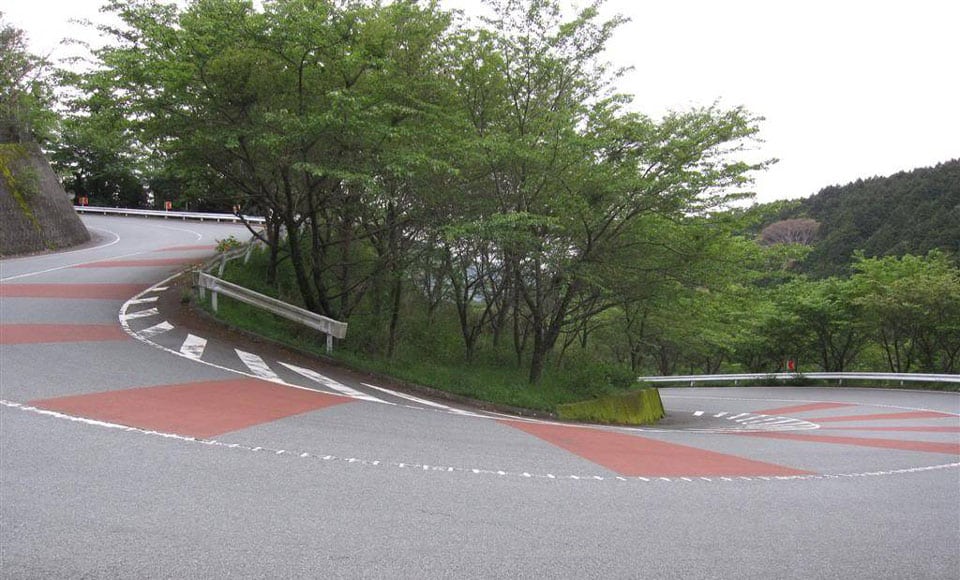 The final stop for the best driving roads in Japan is the Gunma Prefecture, a driver’s paradise that serves as the setting of drifting culture comic and animation Initial D. Take a spin on Mount Haruna, home base of Initial D‘s main character Fujiwara Takumi and setting in the PlayStation 2 games Tokyo Xtreme Racer: Drift and Tokyo Xtreme Racer: Drift 2. You’ll see plenty of modified cars and motorcycles that have come out just to take the illustrious drive.

The Best Of The Rest